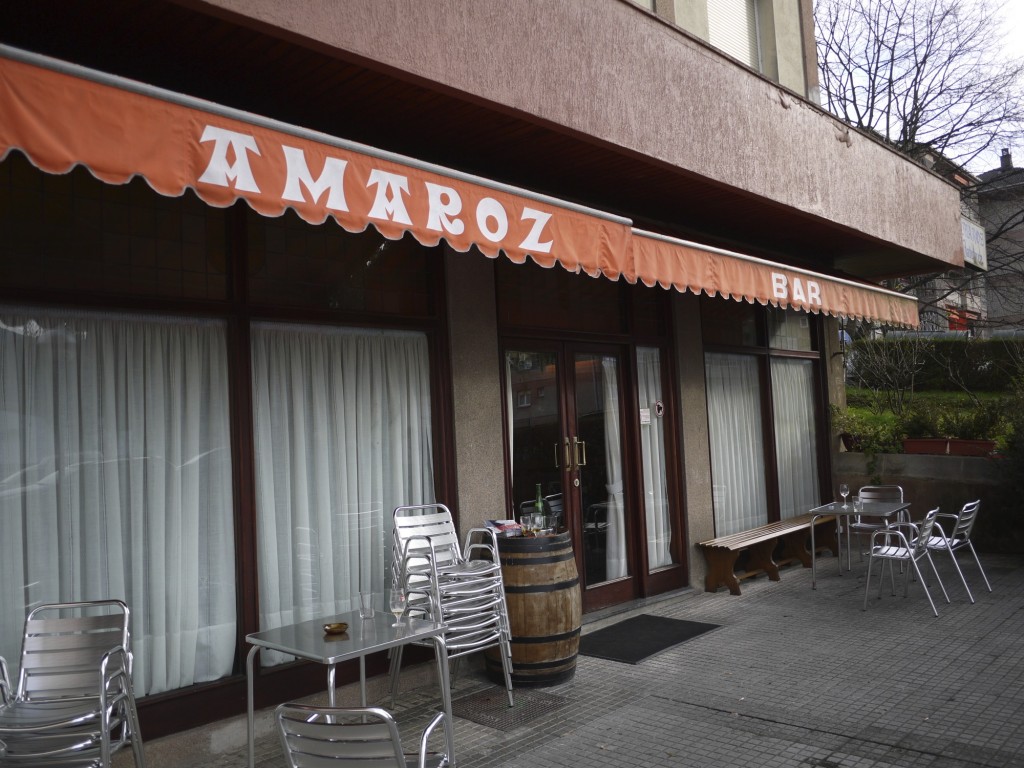 Every so often in my food travels I like to avoid the fine dinning scene and see what the locals are enjoying on a daily basis. Invariably, I come across a hidden gem that few outside have ever heard of, and Amaroz in the town of Tolosa is no exception. With a concentration of some of the country’s best restaurants in the nearby city of San Sebastian, I’m not surprised to see why this place has remained the locals well kept secret for the last 40 years. 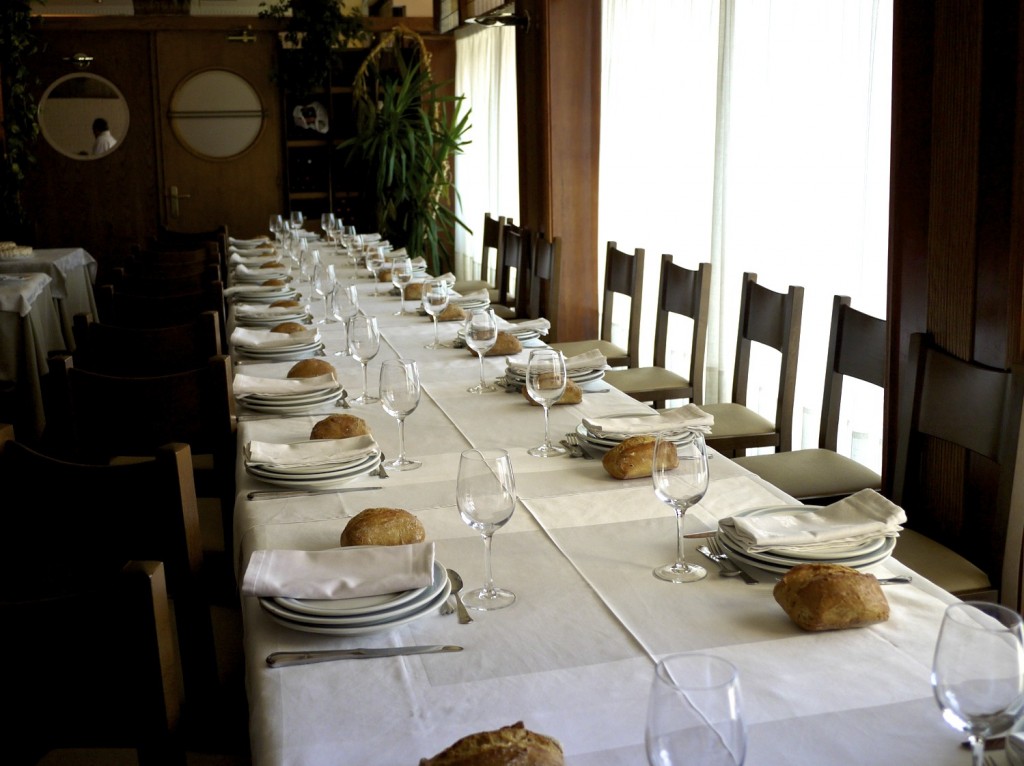 When we first arrived there was no one else to be seen (the spanish eat notoriously late), however after a quick manzanilla as an apperitif, there was soon a rapidly growing crowd. The restaurant can cater up to about 50 people and requires booking in advance for the weekends. The decor was simple and plain but the proprietors were very welcoming. We started the meal with a glass of  the local favourite of Txacoli wine while enjoying our appetisers. 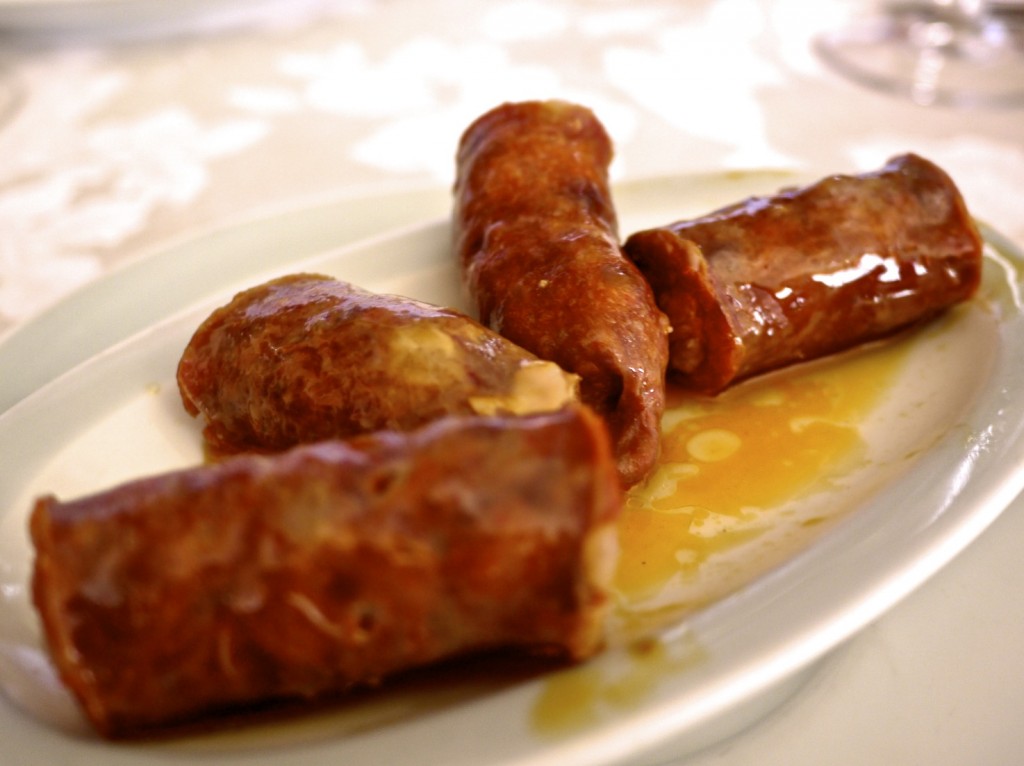 Some nibbles to start of with including chistorra a la sidra. The tender pork meat was pan-fried lightly and then simmered in cider which is slowly added but frequently. Mopped up with some bread, this was a delicious starter to whet your appetite. 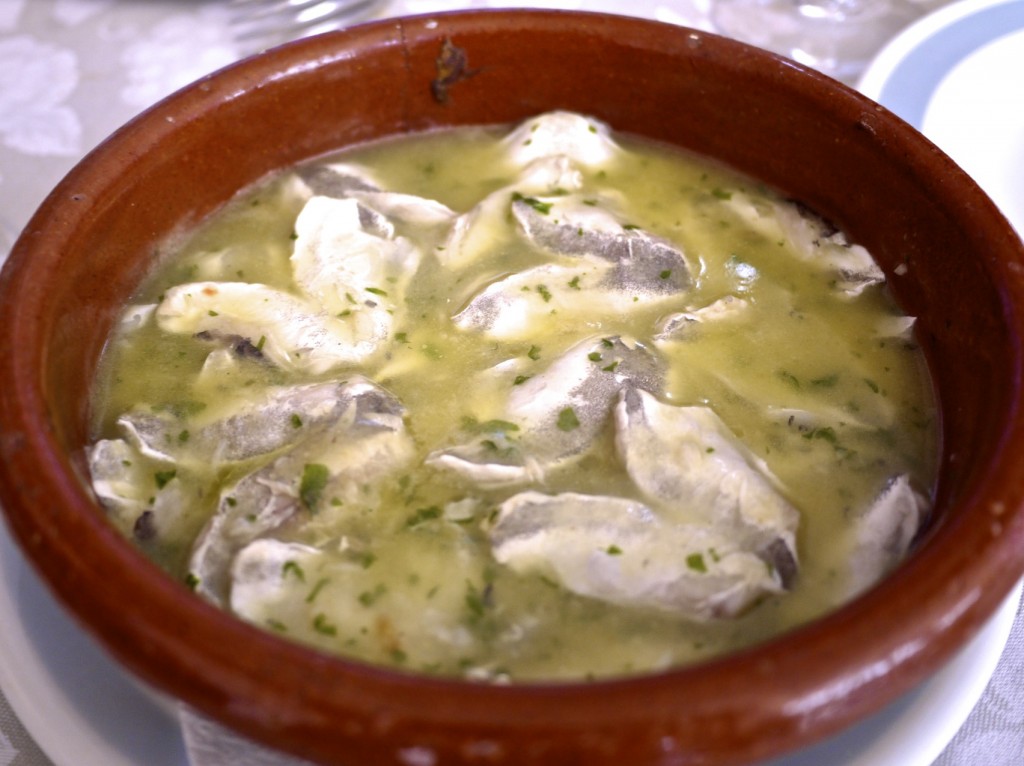 My favourite Basque dish, Kokotxas de Merzula en salsa verde. Kokotxas are essentially delicate pendulums of flesh growing in the throat of cod or hake, in this case the latter. The ones I had here were by far the best I’ve ever had. I found many places either overcooked them and added too much seasoning and parsley. This was delicate but had some texture, and the sauce was buttery with a good amount of seasoning. 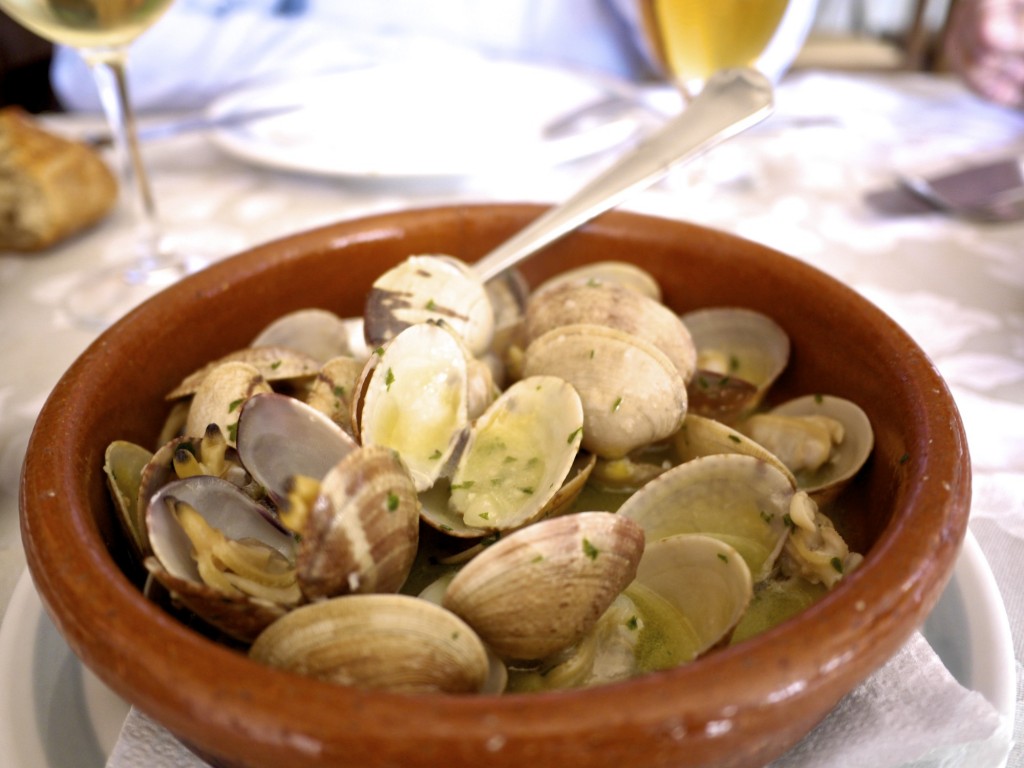 Served together with the kokotxas was a plate of Almejas al ajillo. This was a beautiful simple dish where the clams were cooked in their own juice with some wine and parsley. When you have top quality ingredients, there’s no reason to complicate a dish. 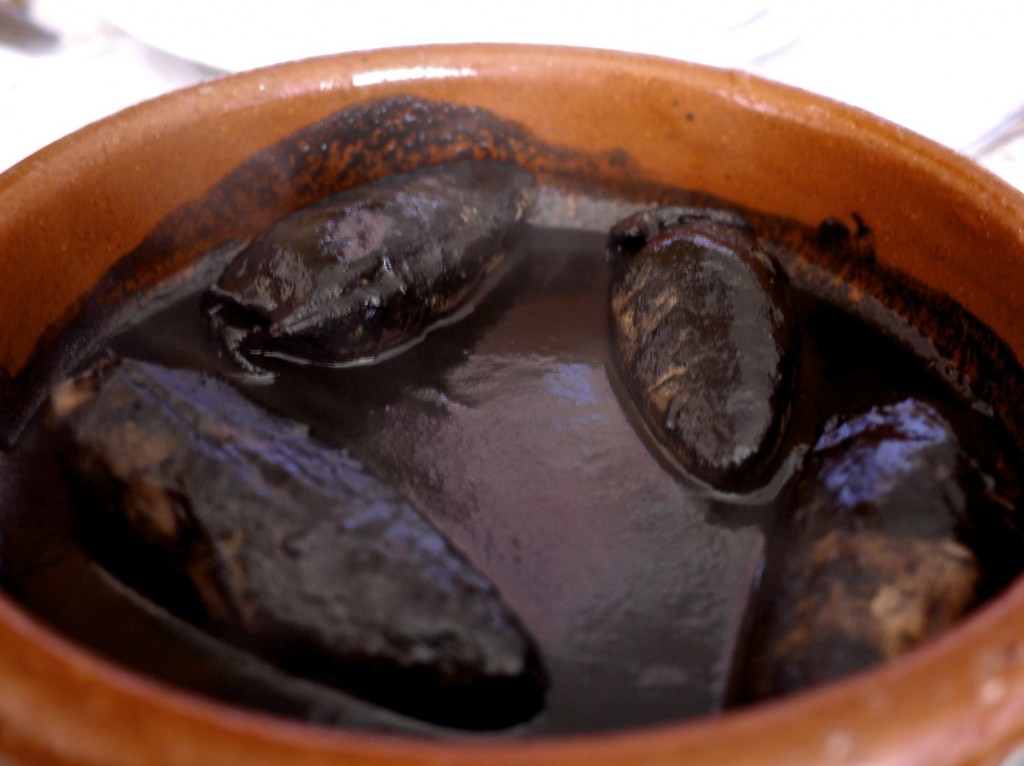 Last of the starters – chipirones en su tinta. The squid was cooked in its own ink resulting in a black stew-like dish where the squid was tender. The black sauce was deceiving as it contained onion, tomato and herbs. It’s a rich tasting dish that requires some skill to prepare as unlike normal squid dish that takes few minutes to cook to avoid the chewy texture, this one is slow cooked for hours. 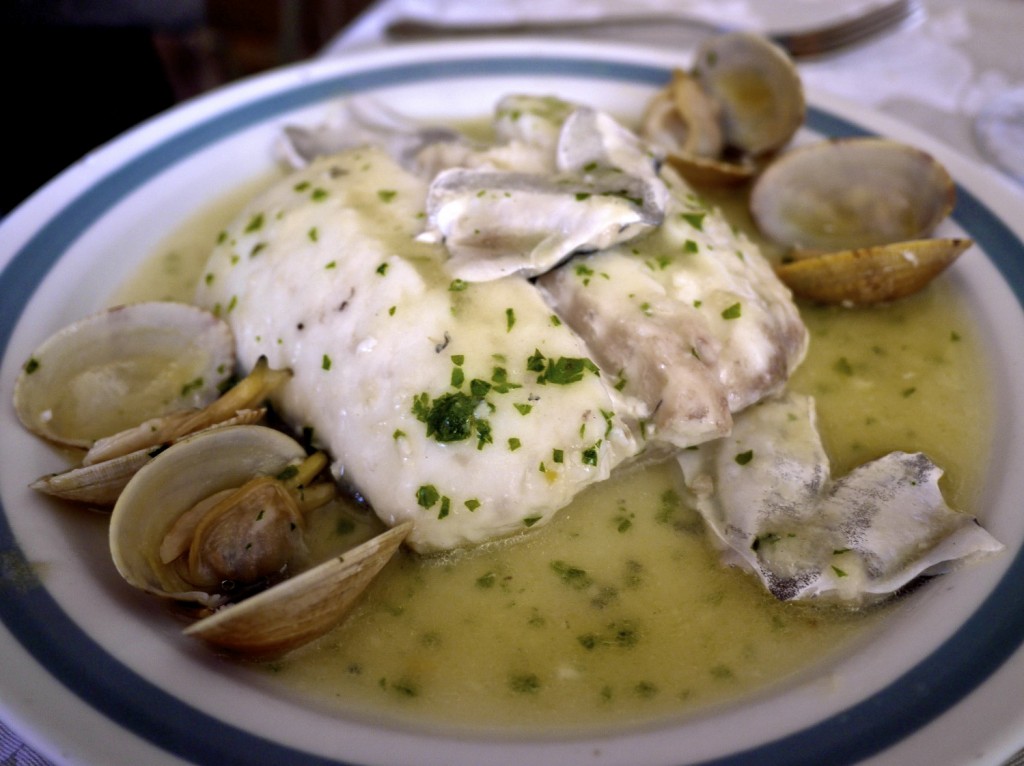 I personally chose the the merluza (hake) en salsa verde con almejas y kokotxas, mainly because I wanted to see how good the fish was given the superb quality of the kokotxas I had for starters. The hake was cooked perfectly and having had this dish a few times before, I particularly liked this dish over the other places I tried because you got a decent piece of fish with little distraction to the main component. 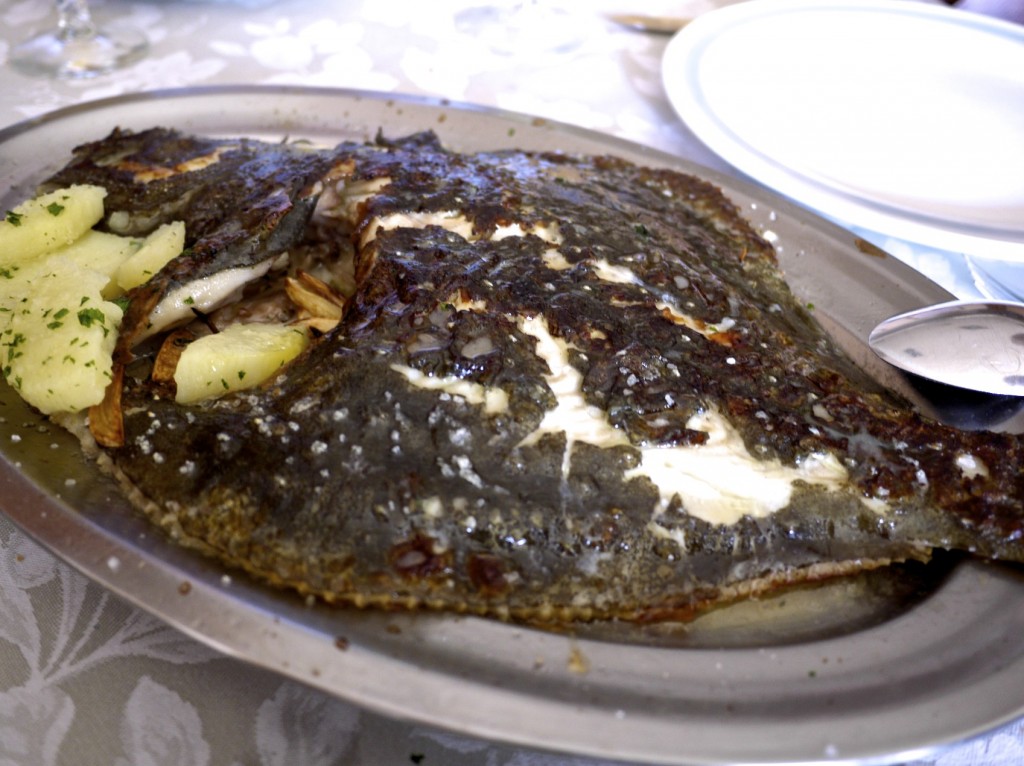 My partner opted for the Rodaballo al horno, which was turbot cooked in the oven. The fish again was lightly seasoned and stuffed with some crunchy garlic inside. This was definitely one of the best quality of turbot I’d tasted in Europe and could see why the Northern coast of Spain holds the title of the best seafood in Europe. 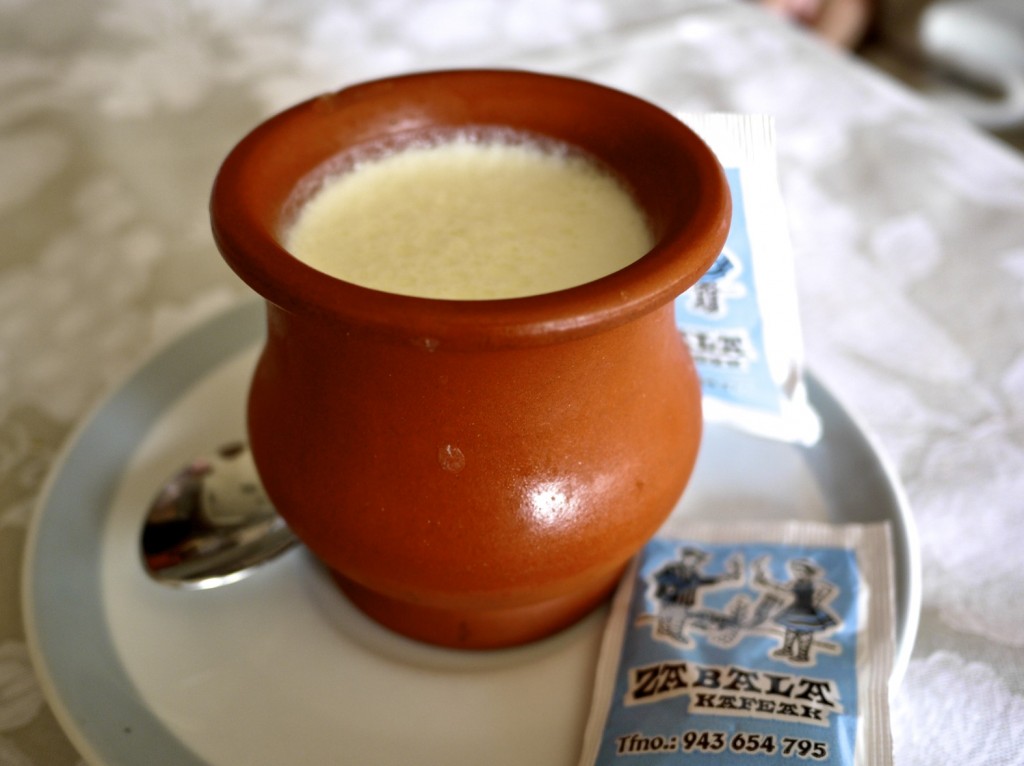 A light dessert of Mamia or Cuajada to finish the meal. This was a milk curd made from ewe’s milk, served with sugar in this case or sometimes honey and walnut. The curd is a product resulting from the coagulation of pasteurized milk, after having added a fermenting product called rennet, and was cooled to a temperature of 35 ° C. It was lovely to try one that was properly made from scratch.

I visited this place first time back in 2011 and have been going back whenever in the region. If you are looking for something casual but good honest food, I would recommend this place. It may be a bit out of the way but if you’re in that part of the world I would definitely suggest stopping by. It would be perfect for a casual family meal or a hearty lunch when traveling.

One thought on “Amaroz, Tolosa”