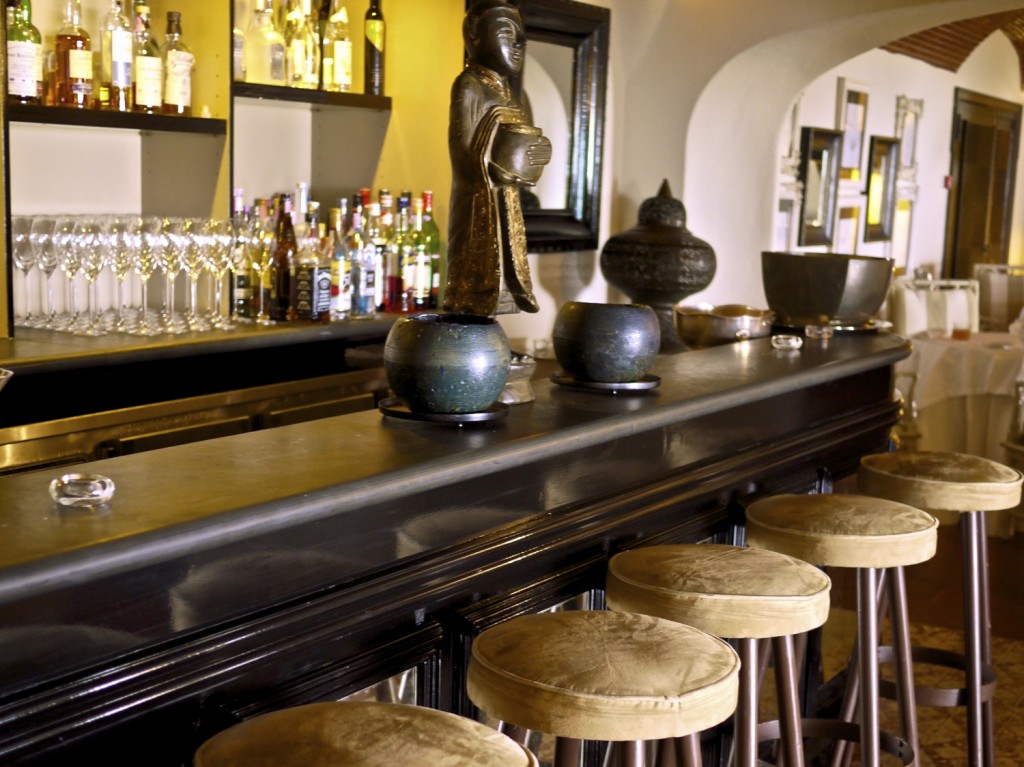 Since catapulting to the forefront of the fine dining scene as the 45th Best Restaurant in the World in 2012, I was extremely eager to visit Vila Joya for two reasons. Firstly, I was curious to discover what Portugal had to offer in the fine dining scene given the success their neighbour Spain had enjoyed over the last decade, and, more importantly, I was intrigued with the fact that it took an Austrian chef by the name of Dieter Koschina to bring Portugal into the playing field of culinary excellence. 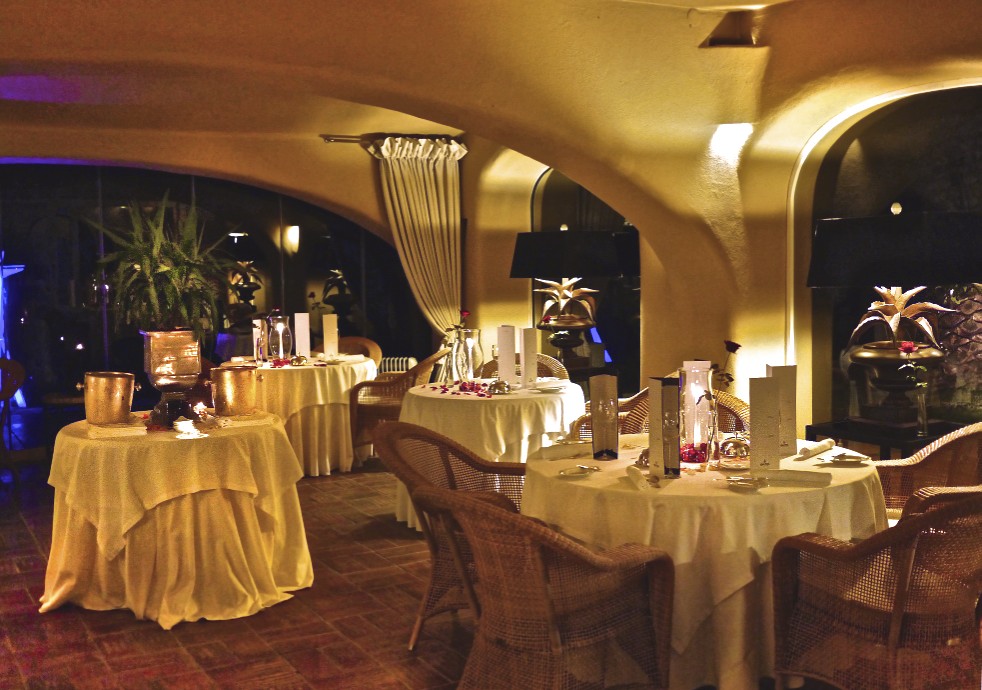 We had wondered all day as to what we were going to encounter and it was difficult to have any preconception – an Austrian chef cooking in Portugal with a reputation for French style cuisine? We were naturally intrigued to see the culmination of these components, but before sitting down at our table… 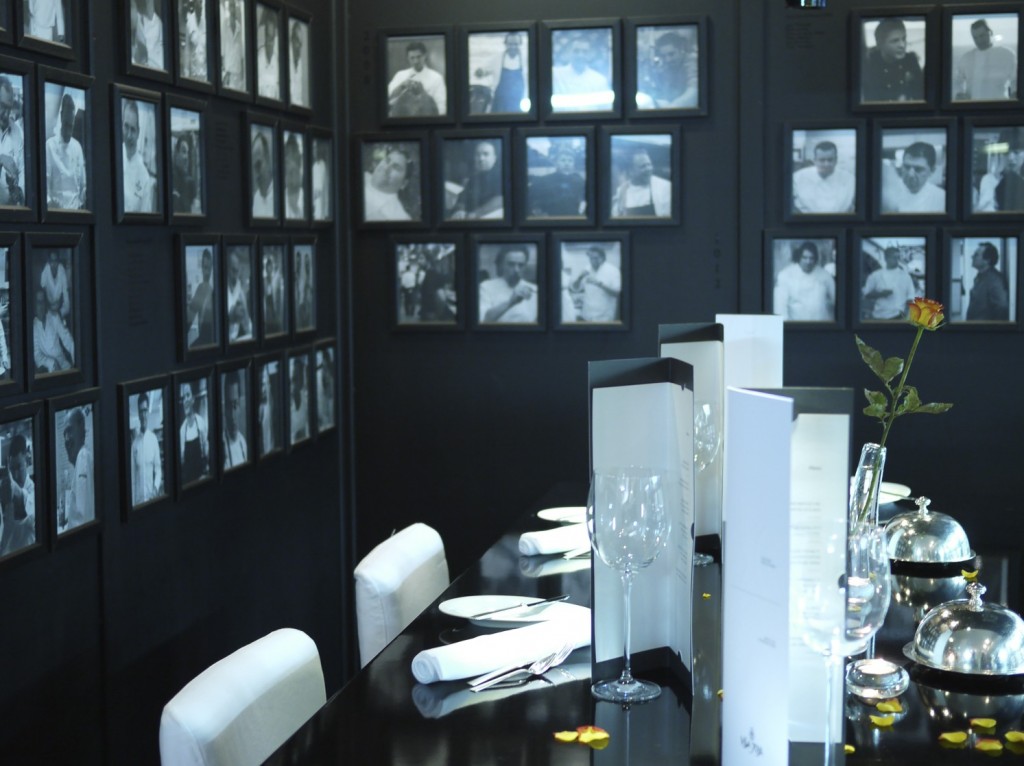 … we had the opportunity to visit the kitchen where we discovered the “crEATivity table” – a table where four curious diners are able to observe the kitchen in full swing during their meal; a good enough reason to return! 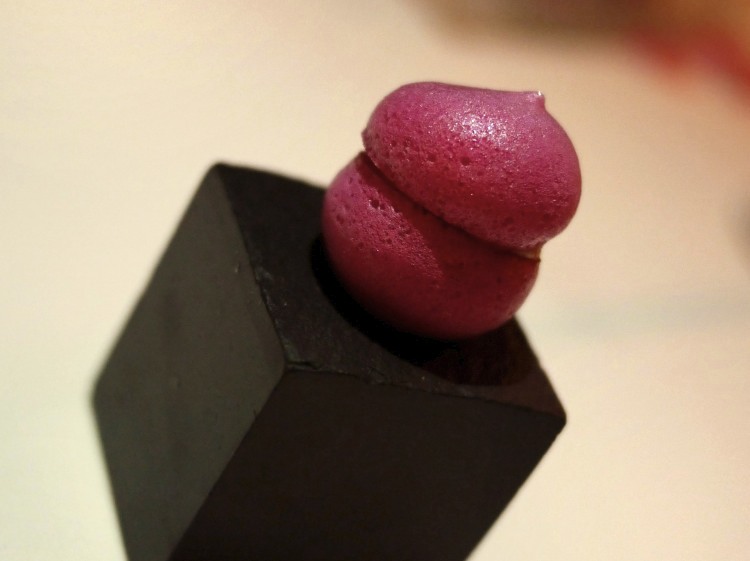 Back to the table and we started with a glass of Ruinart Blanc de Blanc. The array of snacks certainly set the bar high for the evening ahead. The Beetroot Macaron with eel cream was excellent, where the rich and delicate flavour of the eel was balanced against the tanginess of the beetroot. 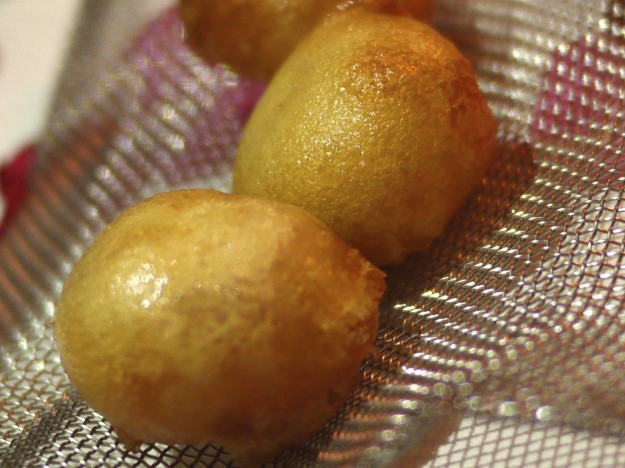 Caviar Tempura – Tempura of salmon roe and bacon. A good flavour combination but I found it slightly salty for my palate. 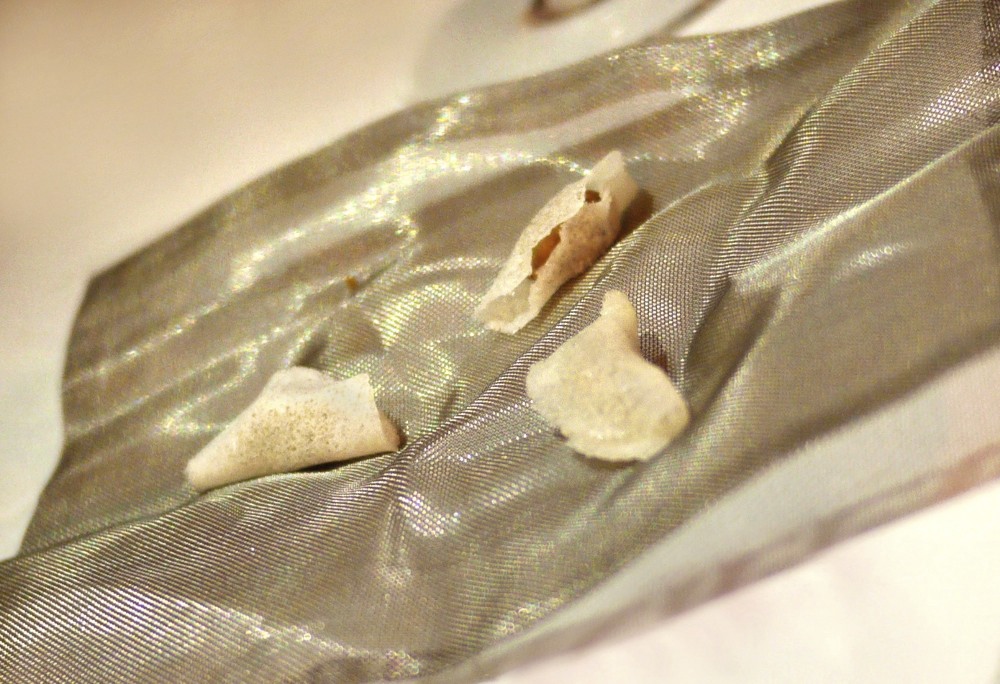 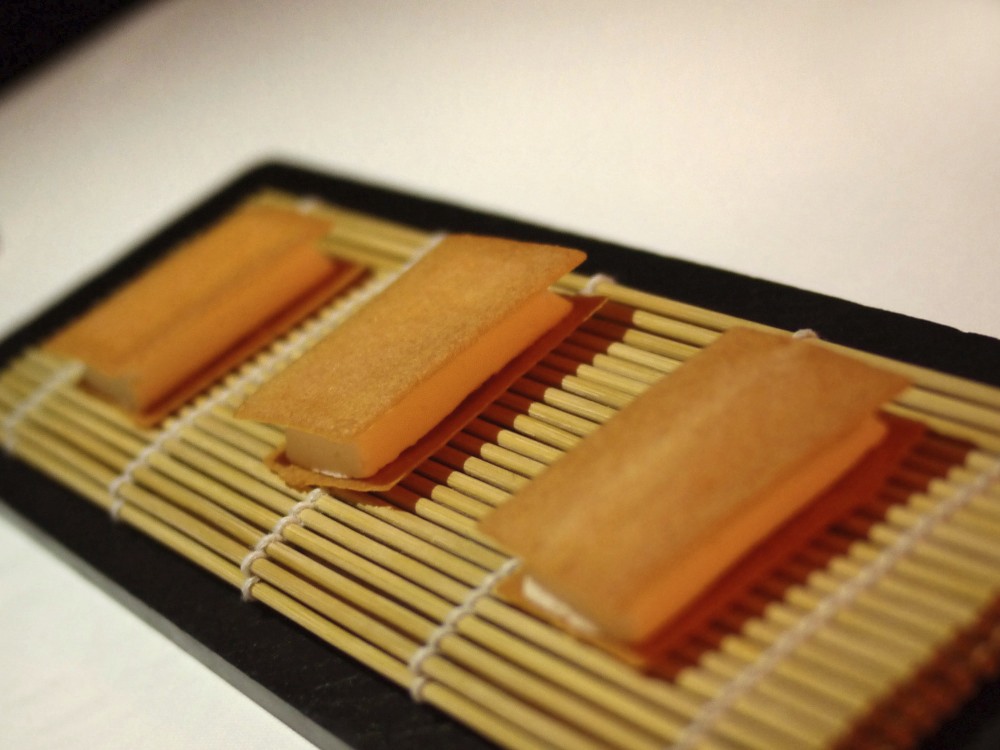 The Parmesan sandwich was extremely light, airy and cool. A nice contrast to the other snacks so far. 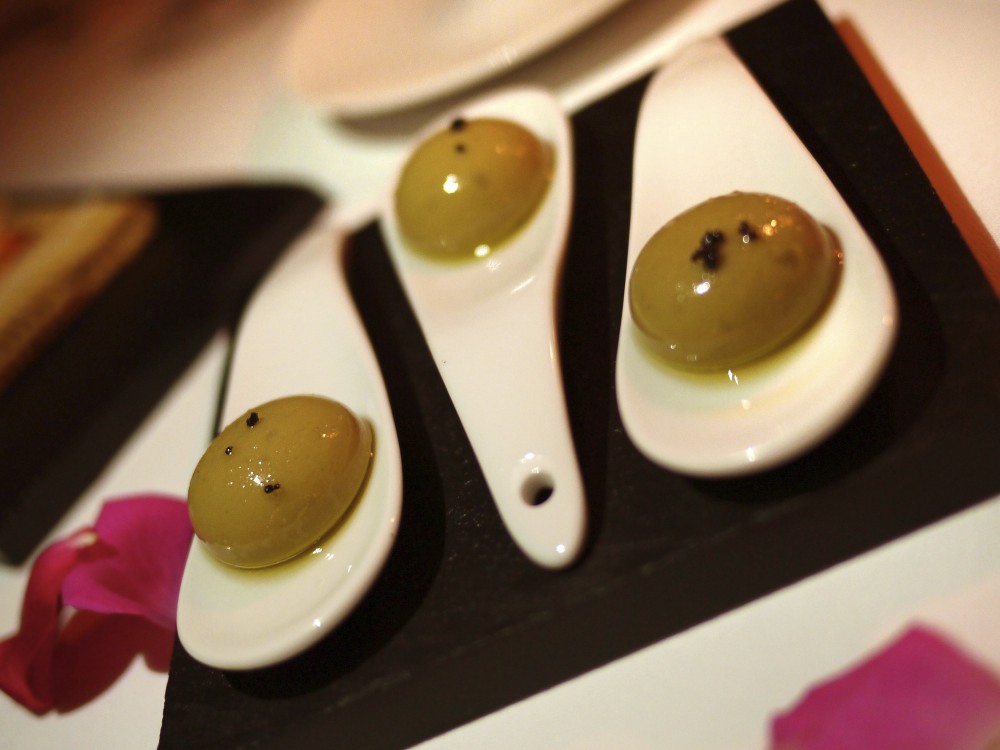 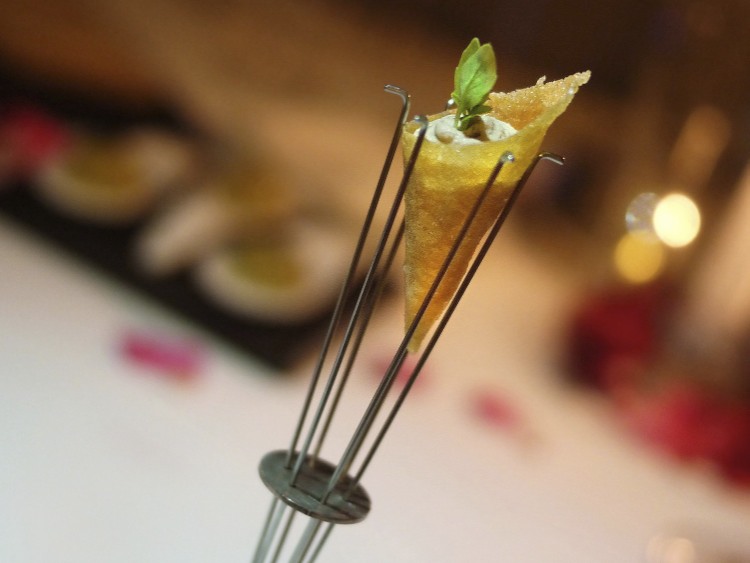 This was swiftly followed by the last snack, a Cornetto Tapenade, which had a fabulous crunchy texture surrounding the concentrated flavour of the sun-dried tomato and olive. 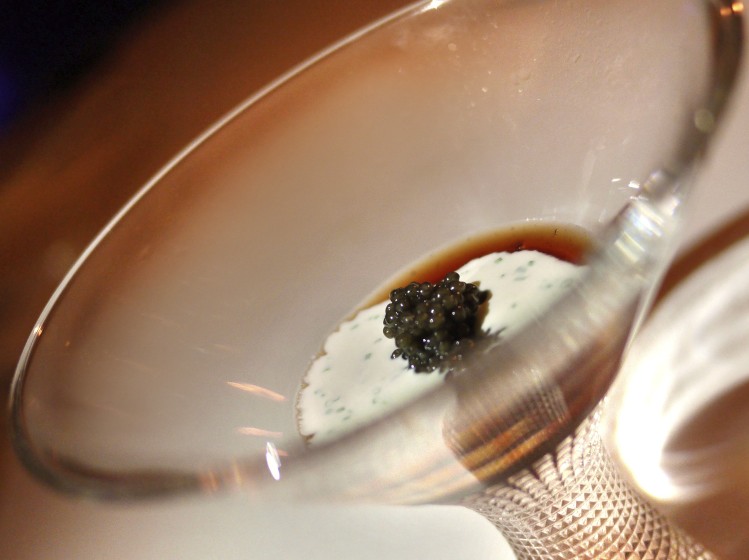 We enjoyed the progression of flavours of the snacks to the amuse bouche of Duck consommé with sour cream and imperial caviar served in a martini glass. The rich and earthy gelatinous duck consommé added a depth to the classic combination of sour cream and caviar, and the small portion was perfect as the flavour was very intense. 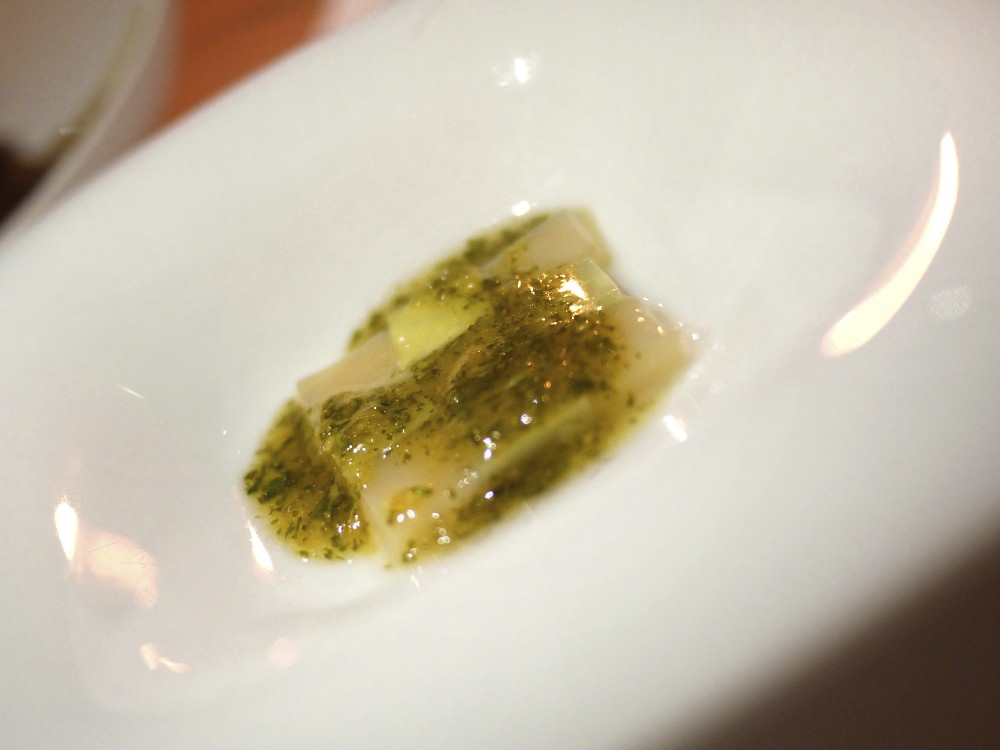 The opening act to the main courses was the first of three Variations of Scallops. It was an artistic plate of scallop, celeriac and vinaigrette dressing. To go with the three scallop dishes, the sommelier poured us a glass of 2010 Eminencia Loureiro, Minho, which was buttery but delicate, full of acidity and with a good floral note. 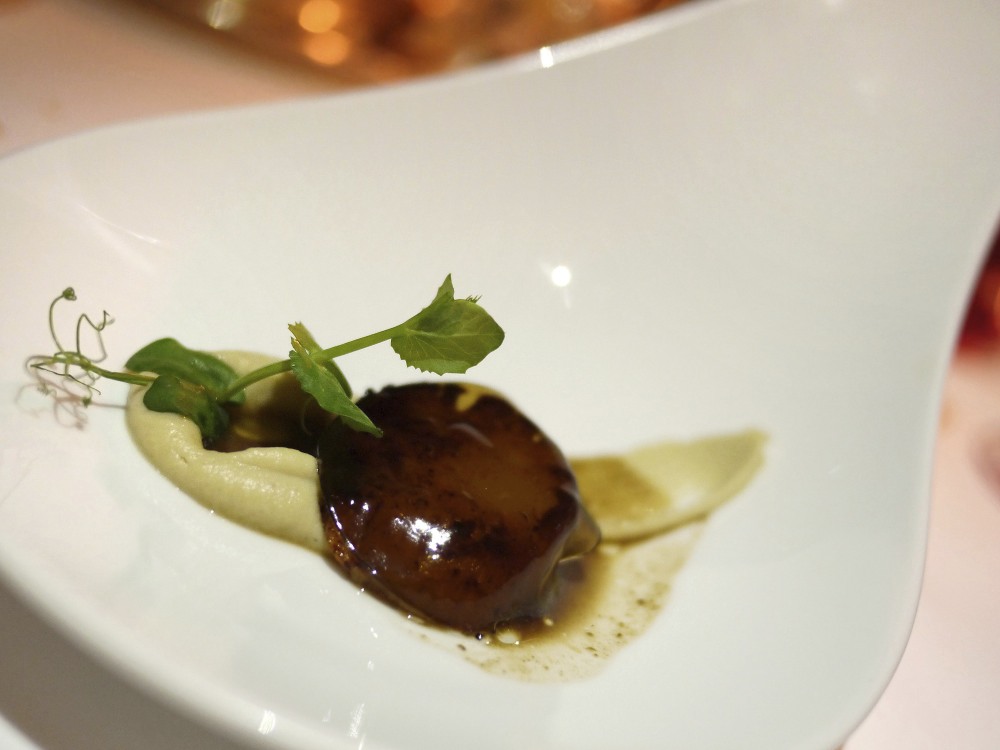 Second scallop installment was Seared scallop on a bed of artichoke puree with a black truffle gel. 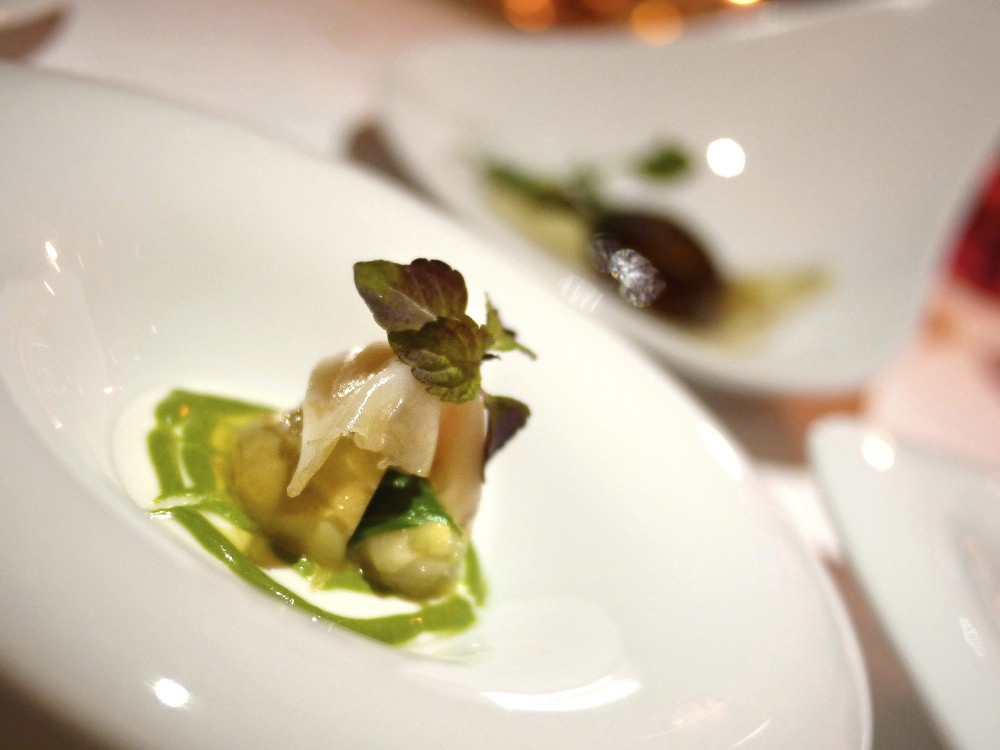 And finally the last scallop dish was prepared as a Carpaccio with cauliflower to complete the trifecta. All three courses showcased Koschina’s creativity and technical skills, as it was impressive to see how unique each dish was despite using the same star ingredient. 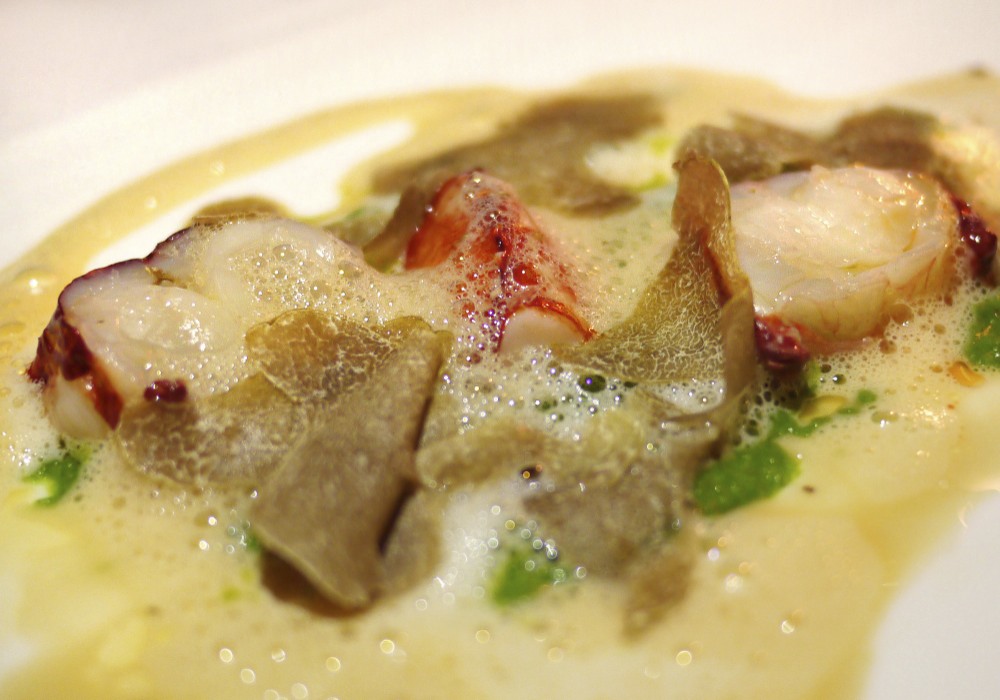 As our visit coincided with the season for the Alba white truffles, we were treated to a freshly delivered batch, arriving only that day. These jewels of the earth were put to good use in the Atlantic lobster, parsley polenta and Alba truffles, a novel combination of two of our favourite ingredients on one plate. The moist lobster magnified the aroma and flavour of the white truffle, and the bed of crunchy ceps and puréed broccoli completed the dish providing additional textural elements to the dish. We were very impressed by the manner in which the ingredients had not compromised, but instead enhanced the taste of either star item. The 2009 Vertice Grande Reserva, Douro had a good acidity and spiciness with a wood element. 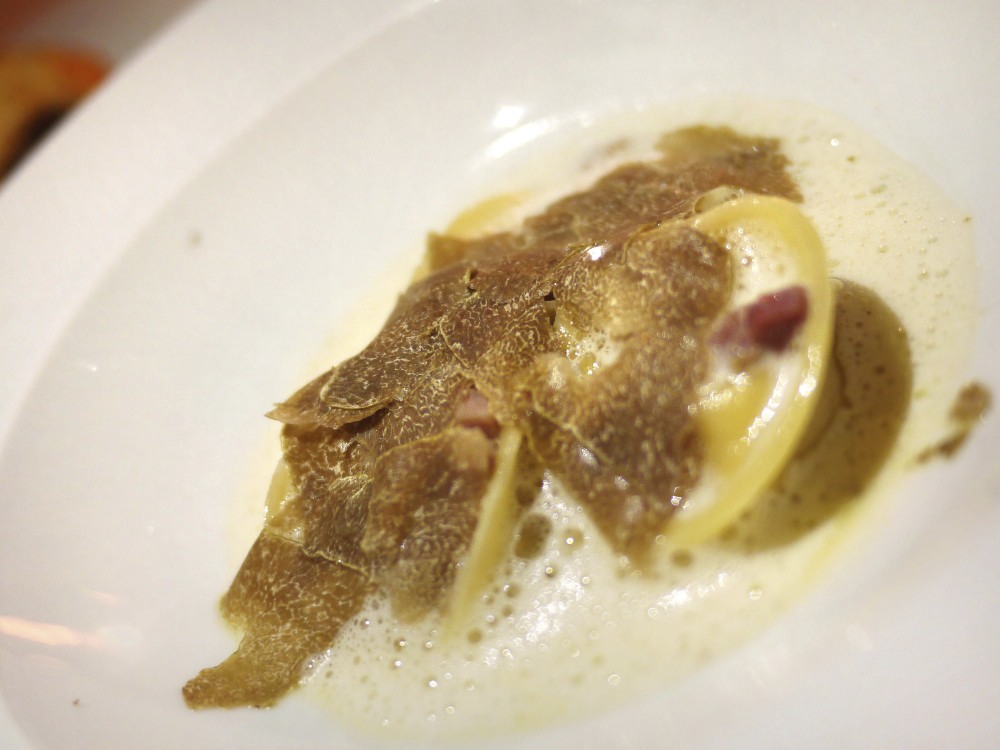 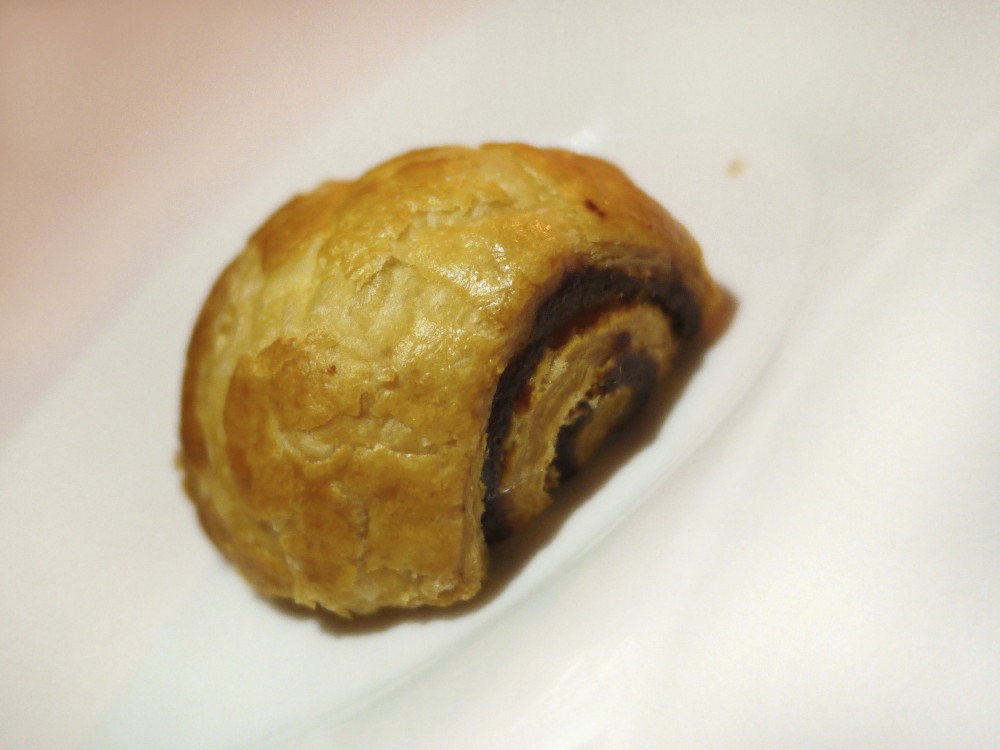 … a truffled brioche to mop up every single morsel of the sauce. We were truly in truffle heaven! 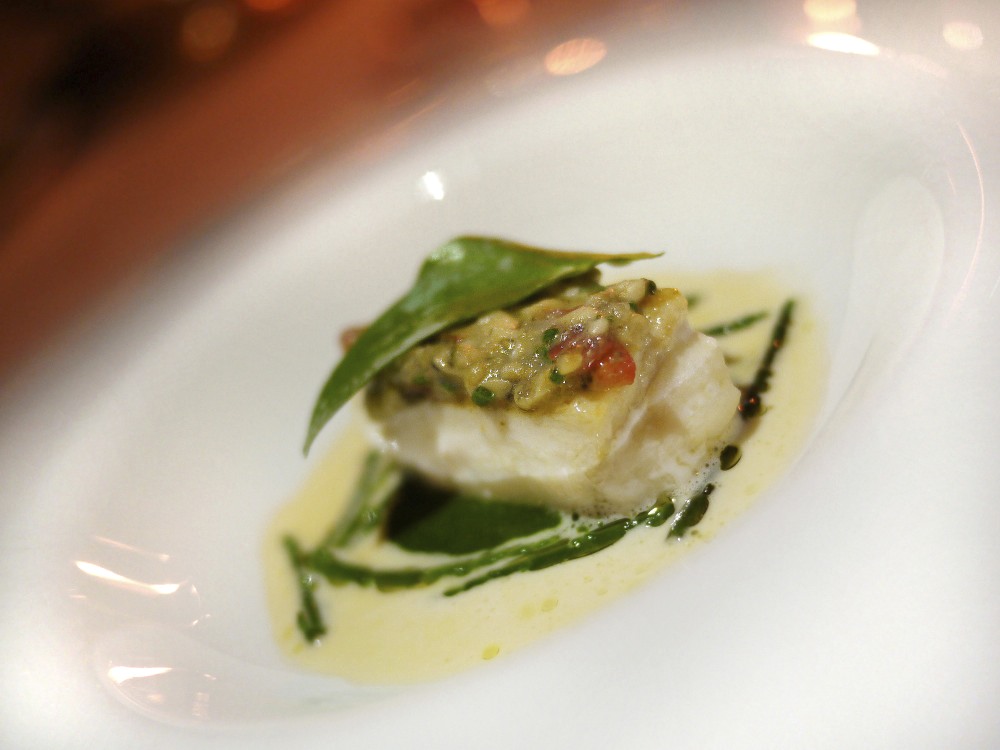 Finally the fish course! Poached turbot, Gillardeau oyster, passe pierre (aka sea green bean). We thought initially it may have been an overkill but the oyster leaf garnish was a great addition to the mouthful of the flavour of the ocean. The glass of a full-bodied 2009 Arrepiado Colection, Alentejo was paired to go with the fish courses. It had a citrus nose with a slight scent of vanilla. 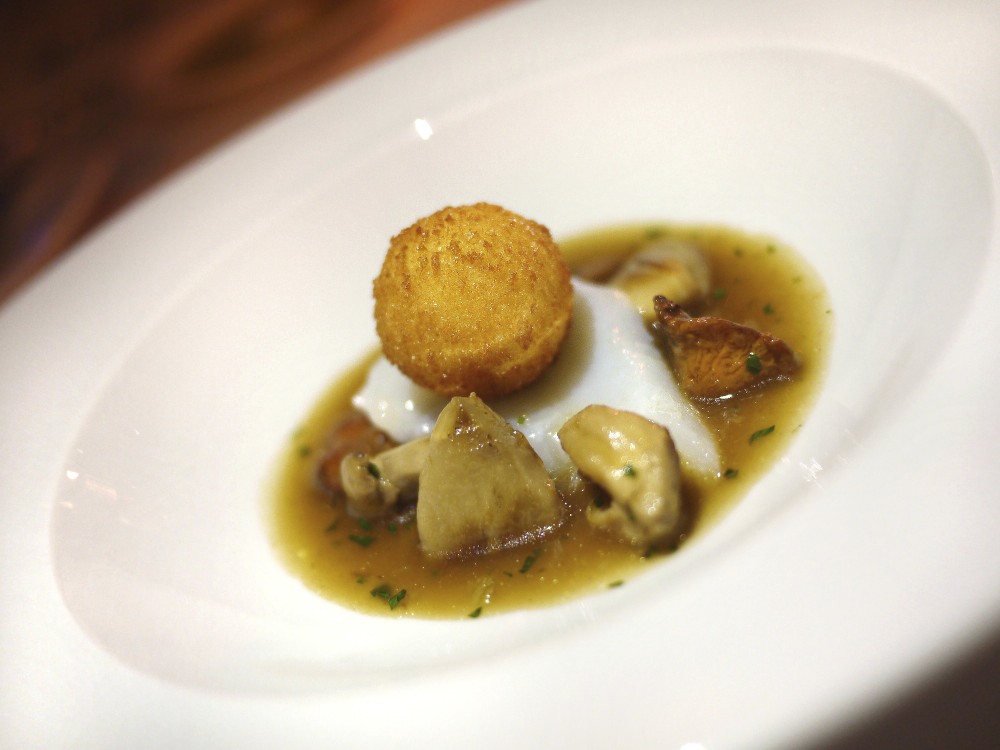 A meal in Portugal of course would not be complete without the nation’s favourite fish, bacalhau (or cod). The Cod fish confit, wild mushrooms and garlic had a lovely silky texture not generally associated with the typically large and flaky cod. The creamy deep fried ball of aioli provided a crunchy texture without overpowering the dish, and the accompanying chanterelles were the perfect touch to marry the ingredients together with its earthiness. Suffice to say, we were impressed with the calibre of the dishes so far. 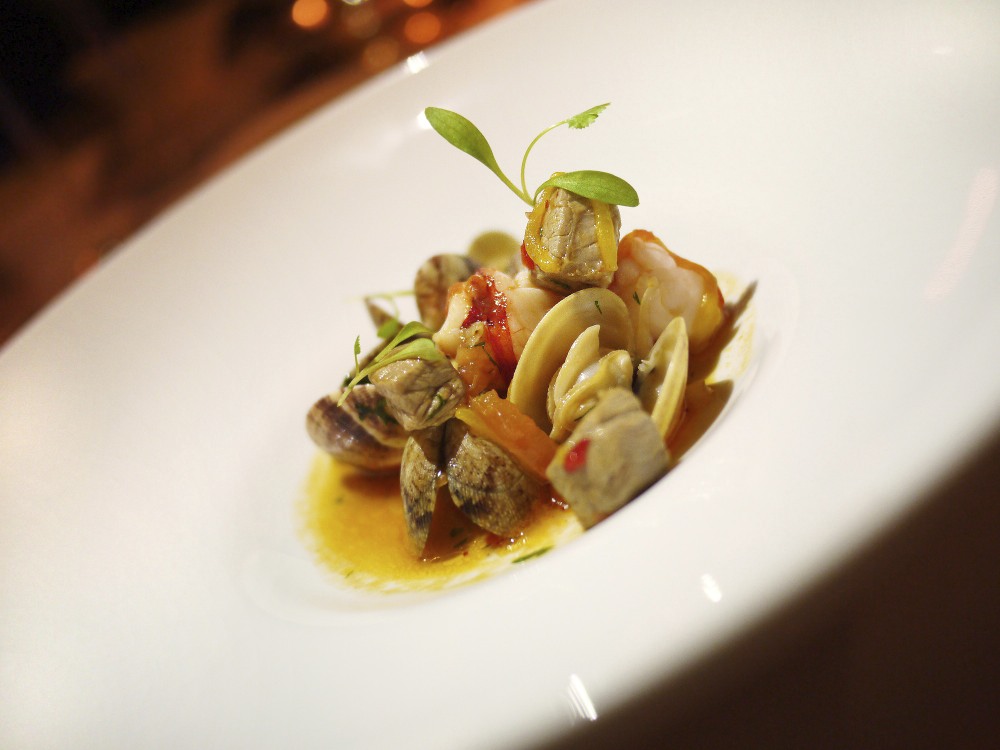 Continuing with the theme of novelty, Koschina’s version of the traditional Algarve dish, “Cataplana” Vila Joya, was another triumph.The dish is prepared in a clam-like shaped pressure cooker (the cataplana), which locks in the essence of the ingredients, in this case pork, cockles and lobster with a tomato and onion base. The finishing garnish of the crouton was perfect to soak up the remaining liquor, packed with all the flavours of the ingredients. It was a wonderful reinvention of a traditional regional dish whose roots dates back as far as the 8th century. 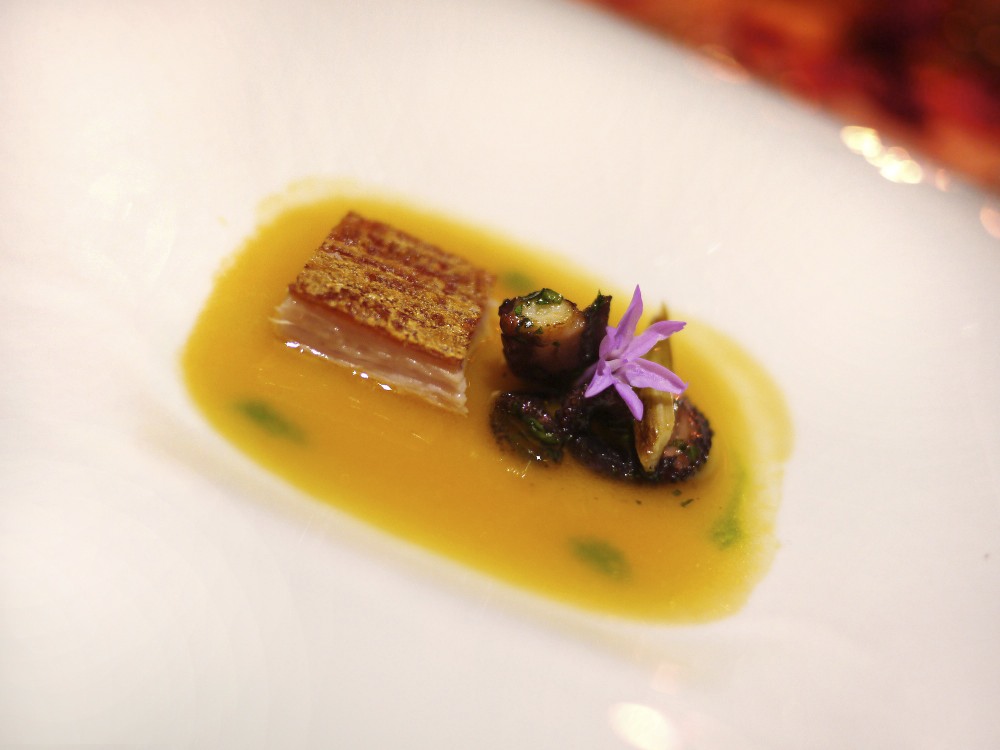 Following on was the Young Pork belly, Chorizo sauce and octopus, where the sea and land met. This was a lovely soft pork belly and crispy skin, together with grilled octpus that had a bite. It was slightly salty again but had great flavours. 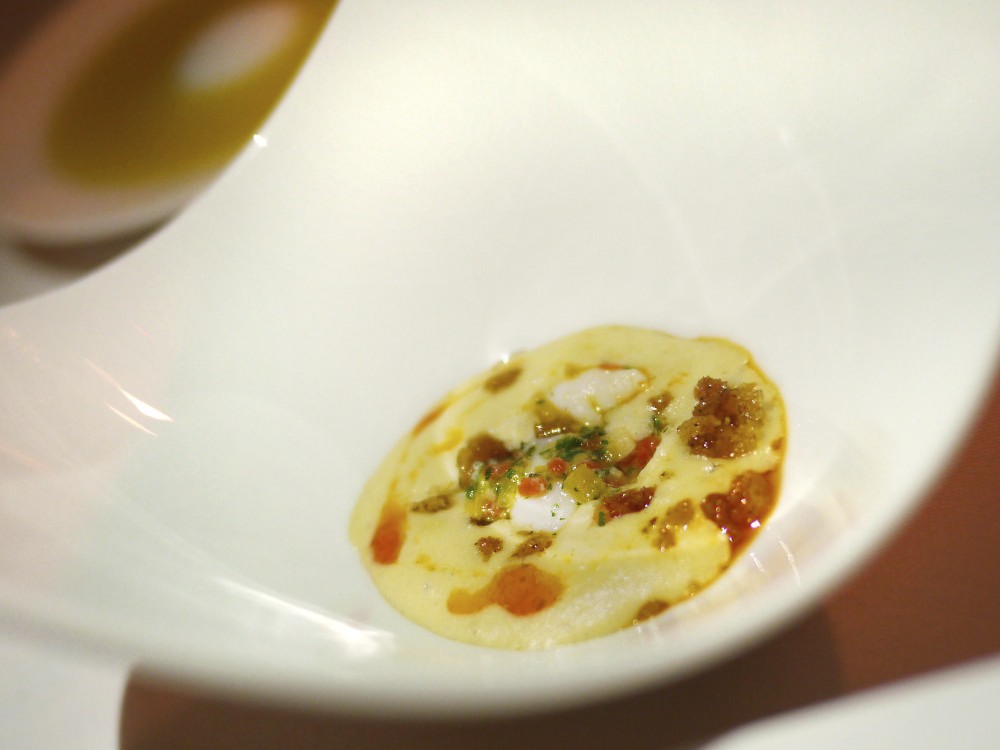 The sauce served on the side of the above dish was made from chorizo, tomato, crouton and onion We enjoyed them both with a matching glass of a decantered 2004 Chryseia, Douro that had a smell and taste of a very fine porto, slight cigar smokiness and overripe currants. Happily, we only had Portuguese wine this evening and I was very impressed with the choices, possibly because my knowledge of Portuguese wine was quite limited. 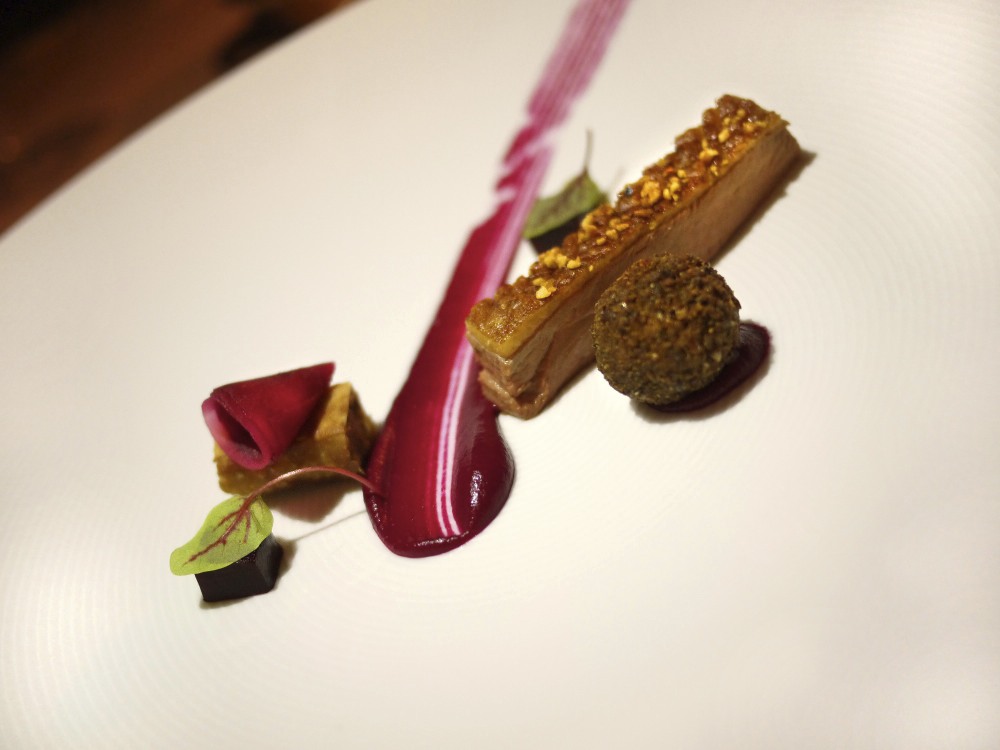 The finale to the main courses was the Miéral Duck, beetroot and raspberries. A rectangular cut of duck breast with raspberry and beetroot sauce, a duck breast spring roll with beetroot wedge, and an encrusted crispy ball of duck liver. It was a grand finale to the main act of the meal but perhaps was possibly a couple of mouthful too many! 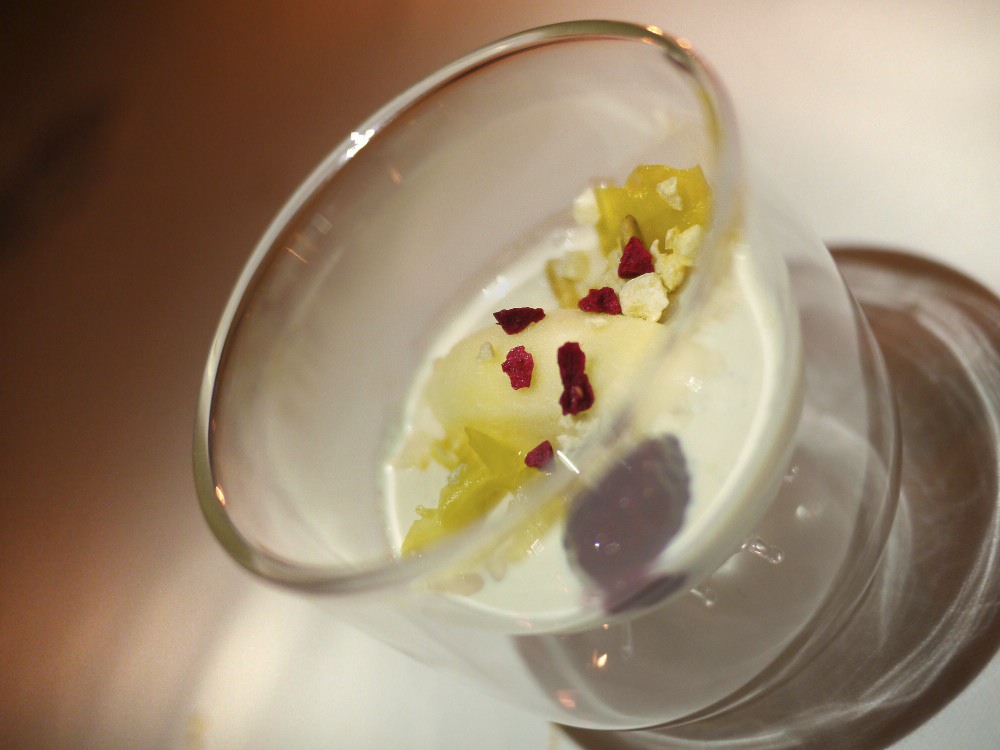 Luckily we were moving on to the dessert courses. This started with a prelude of Pineapple Carpaccio and white chocolate soup served over a bed of fresh pineapple wedge and pine nut. The acidity from the pineapple and the sweetness of the chocolate made this a fresh and fruity palate cleanser. 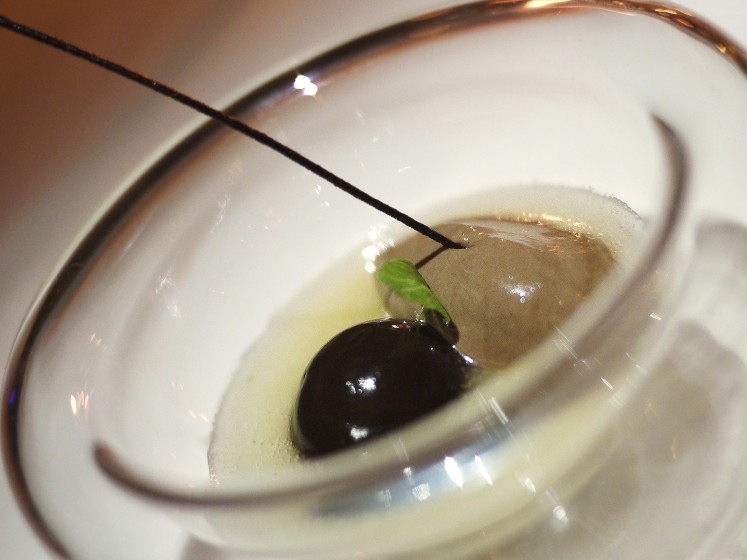 The subsequent Pear and cocoa beans ice cream was again a creative and light dish. The milk chocolate ice cream and dark fondant chocolate ball submerged in a cold pear juice was refreshing and clean on the palate, and what appeared to be an ordinary decoration of a thin chocolate stick had a surprising crunch to it. It was a superb introduction to the culmination of this extensive tasting menu, which was… 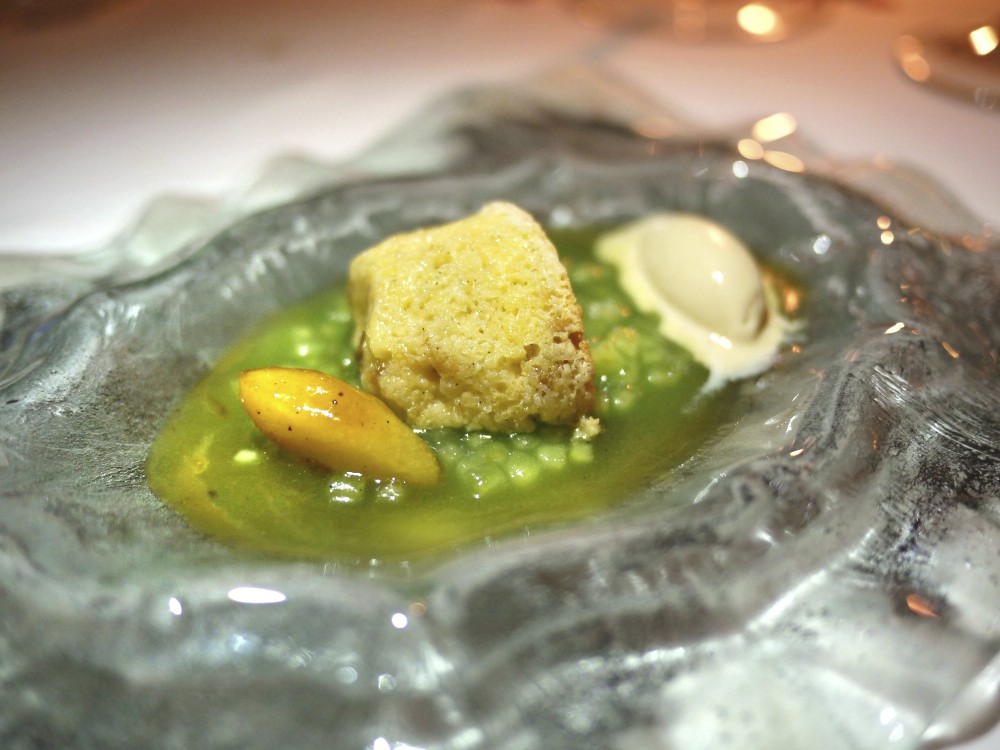 … a Soufflé of croissant, apple tartare and sorbet of salted caramel, again incorporating a contrast of flavours (salty and sweet) and temperature (cold and hot). The flavour was not dissimilar to that of an apple pie, although the portion size was again spot on as it was a very hearty course. 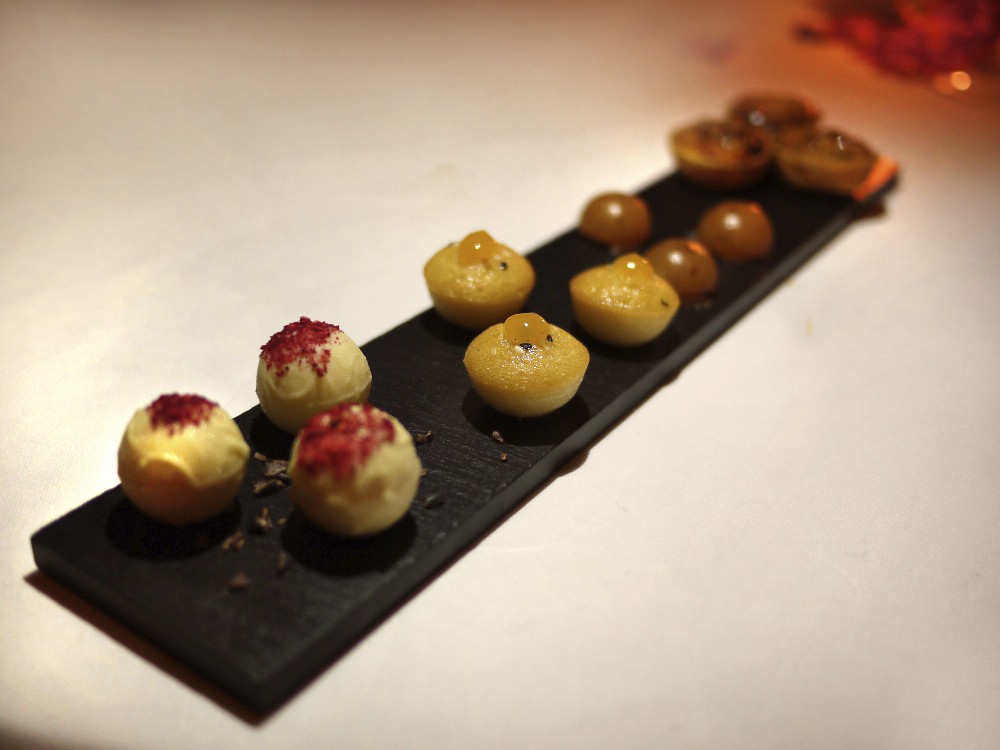 It was by now approaching 2am and, as we sipped over a glass of 1964 Krohn Colheita Branco port with our petit fours, we found ourselves content in this little piece of paradise but exhausted from all the excitement. Our taste buds were well stimulated from the various innovative dishes with unique but successful flavour combinations. We had also been introduced to some of the diverse and delicious traditional cuisine that Portugal is famed for, which was complemented well by wine from a region that was previously unfamiliar to us. The adoption of the local produce and cuisine to his Northern European cooking techniques makes Koschina a truly unique chef who we will be expecting many more culinary delights from in the future. Let us hope that his cuisine will inspire other chefs in Portugal to follow suit.