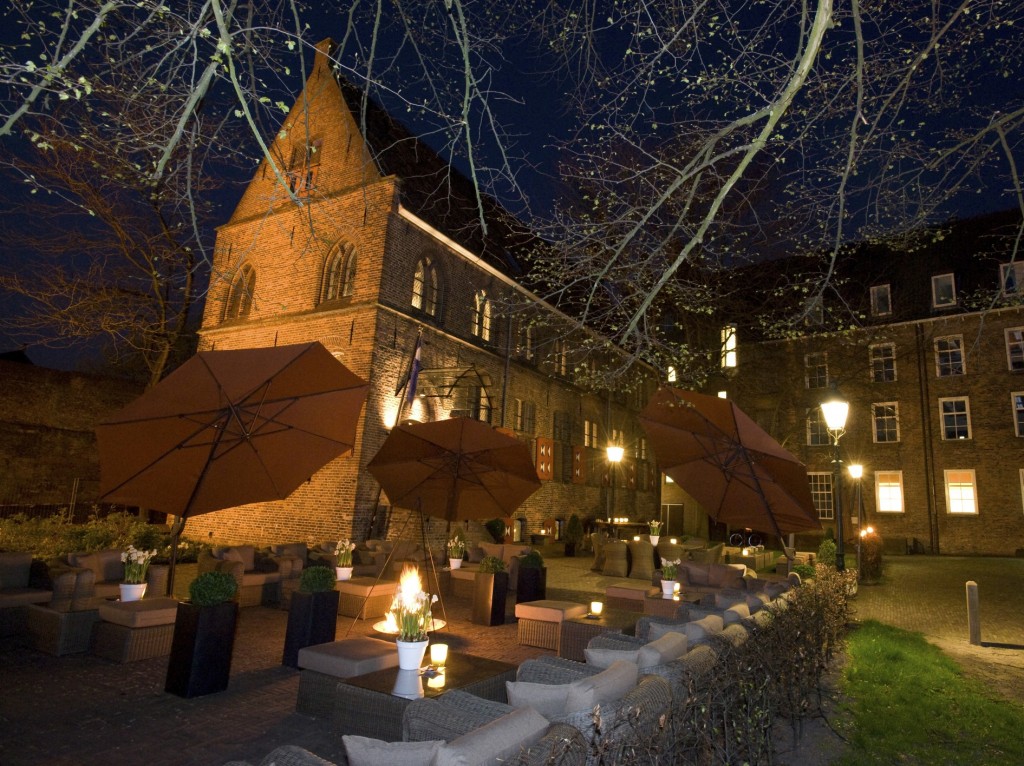 De Librije is housed in a remarkable 15th century library of a Dominican abbey in the small town of Zwolle, located just a little over an hour away from Amsterdam by train. 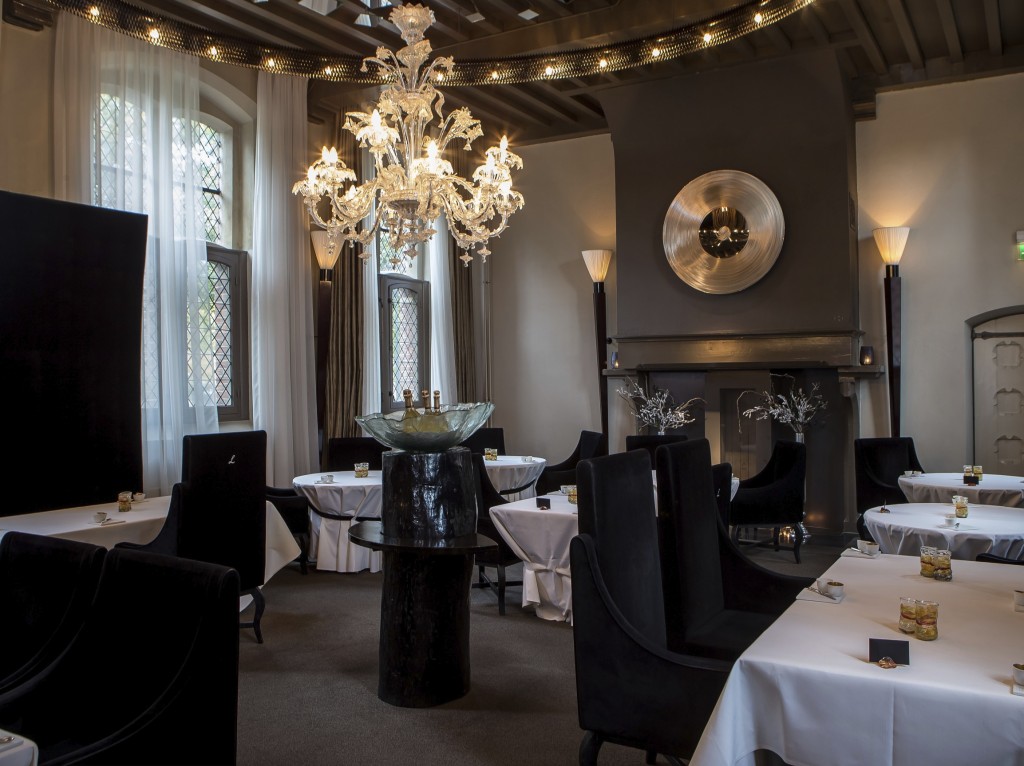 After a brief introduction to Jonnie, I was guided to my table where an unexpected contemporary space opened up in front of me. What appeared to be original gothic leaded windows and raftered ceilings juxtaposed the modern dominating glass chandelier and its surrounding art installation, a halo of lights. The modern high-backed black velvet chair was deceivingly comfortable and a sleek addition to a fairly mellow toned room. 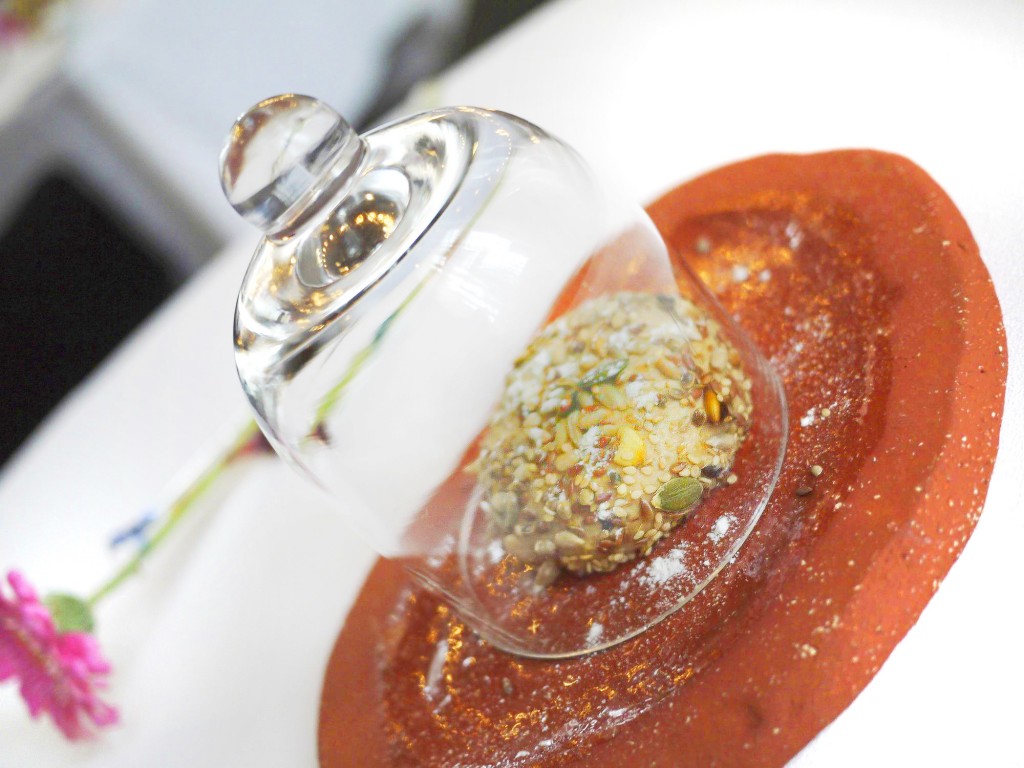 A glass bell-jar containing bread dough made with fermented seeds was presented and left on my table at the start of the evening before it was taken away to be baked. You could see the dough slowly rising… 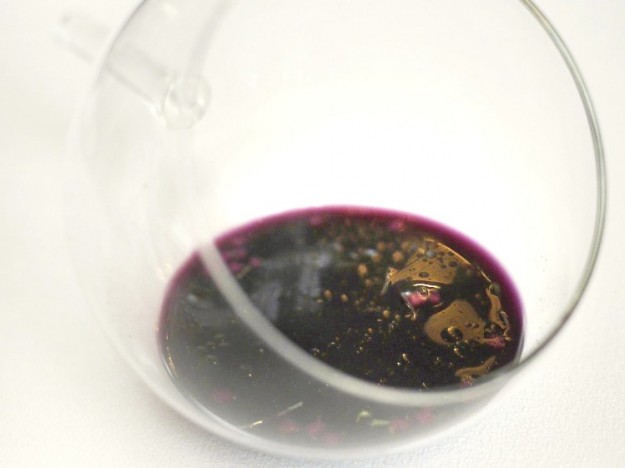 A “stomach cleanser” before starting the meal with a Tea of red cabbage and dried pepper leaf. I really enjoyed the note of smokiness from the pepperplant and the slight sweetness from the red cabbage. 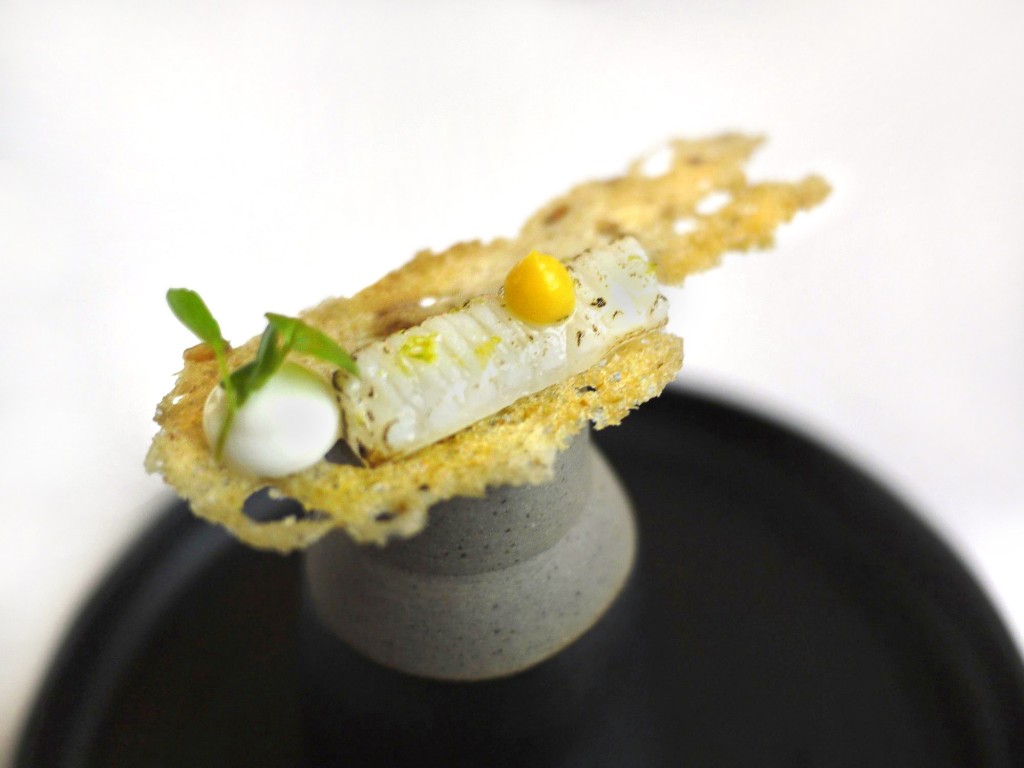 Swim fin of halibut with apricot kernel oil with a glass of Ruinart blanc de blanc. The halibut had a beautiful texture and, despite my initial skepticism, the subtle sweetness and fragrance of the apricot and orange oil worked well with the fish. Great start so far! 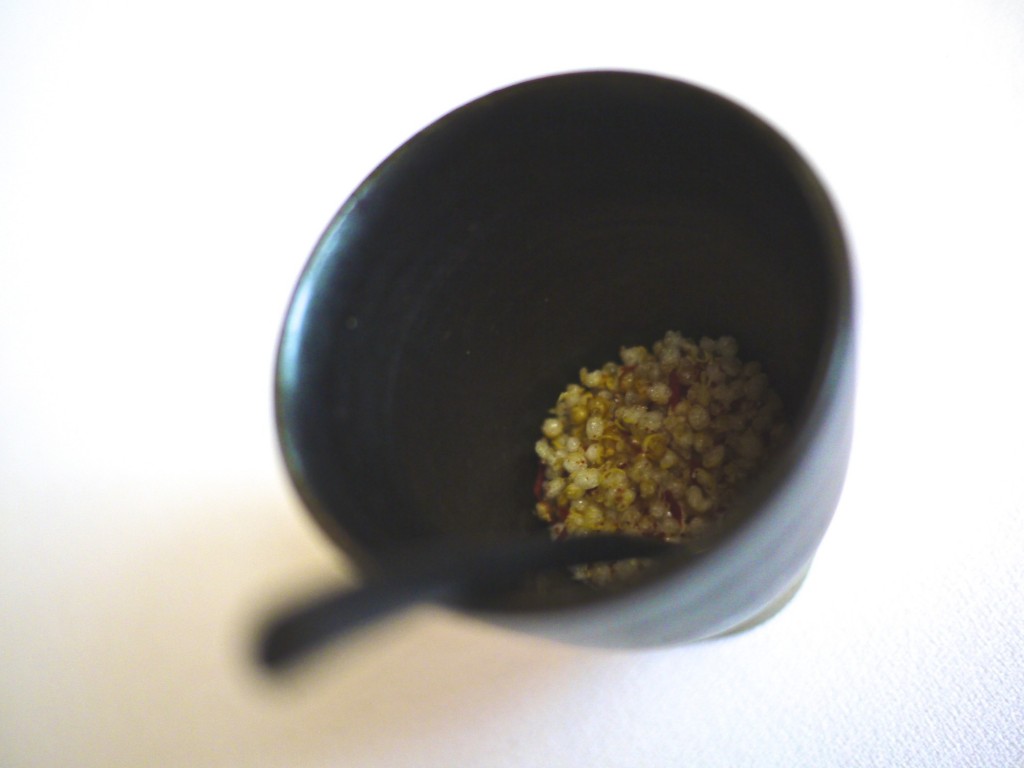 Brandade of halibut which was more mellow in flavour but had a lovely crunchy texture. 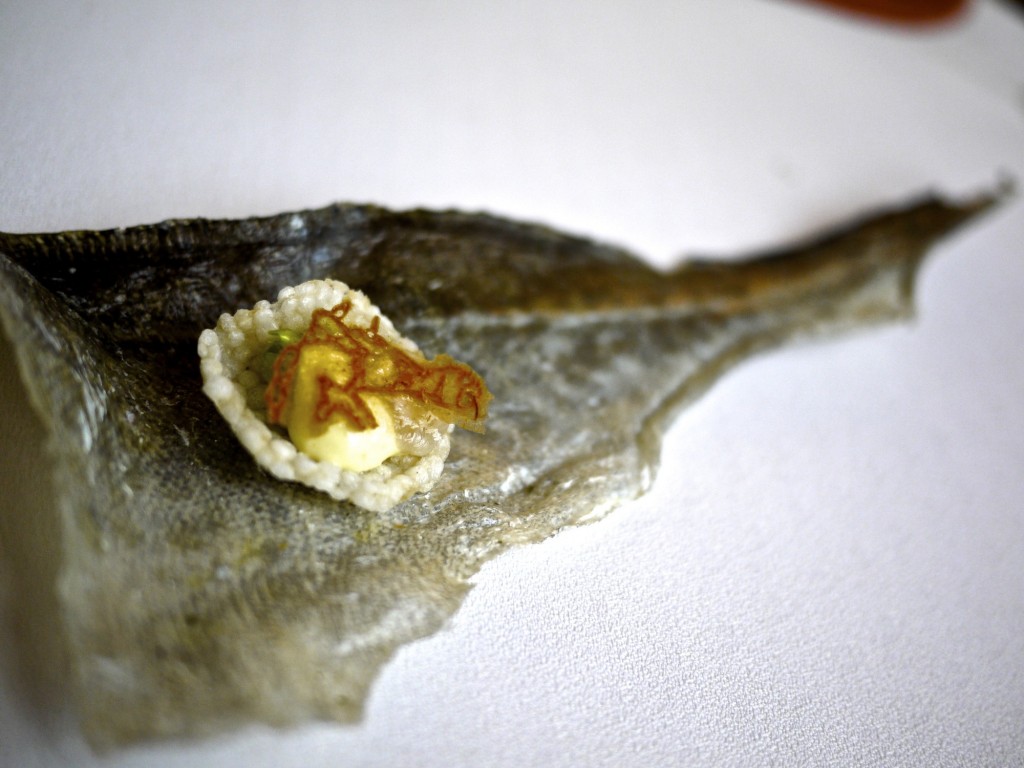 A typical local dish of the Tongue of cod with crispy chicken skin. The cod was very delicate in texture but packed with bags of flavours. 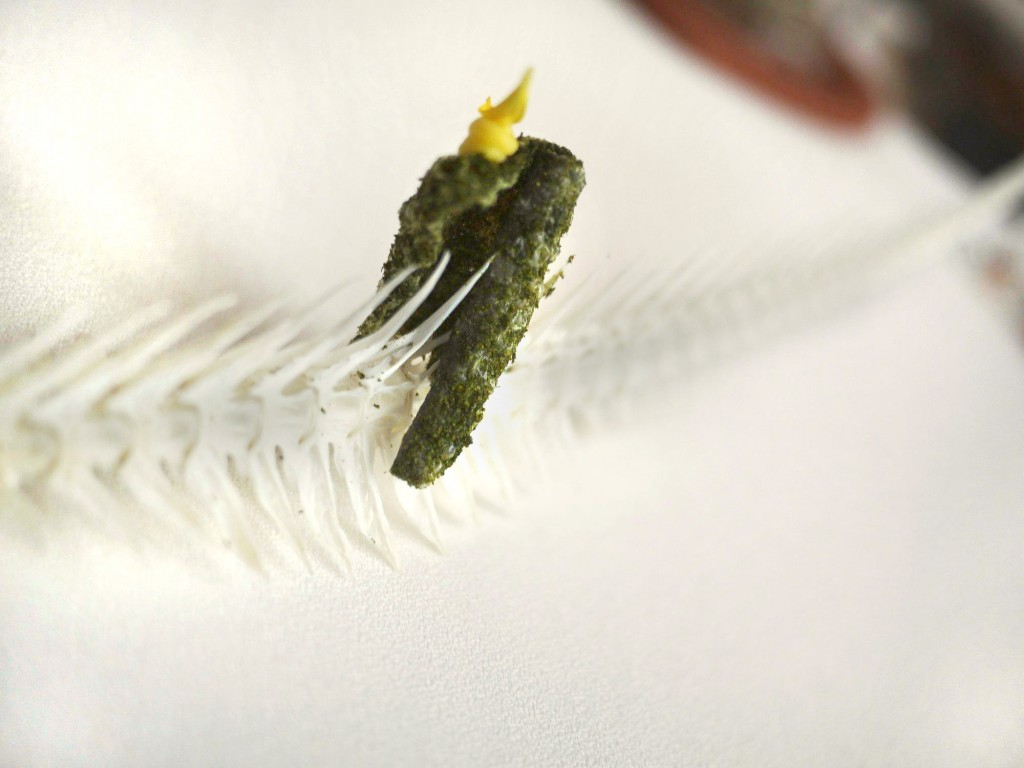 Skin of cod with lemon and seaweed served on the fish bone for a unique visual effect. The seaweed was lovely and reminded me of nori powder. 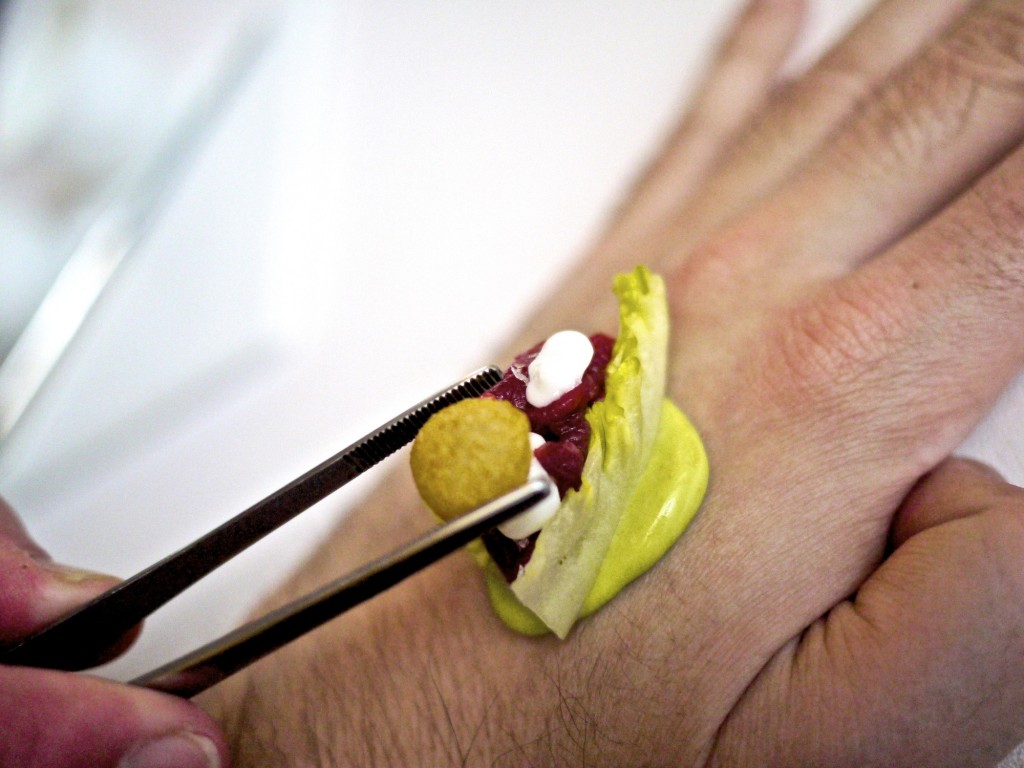 The next dish helped Jonnie get his first Michelin star and encapsulated Jonnie’s personality in one dish. Tartare of beef with oyster and chives… 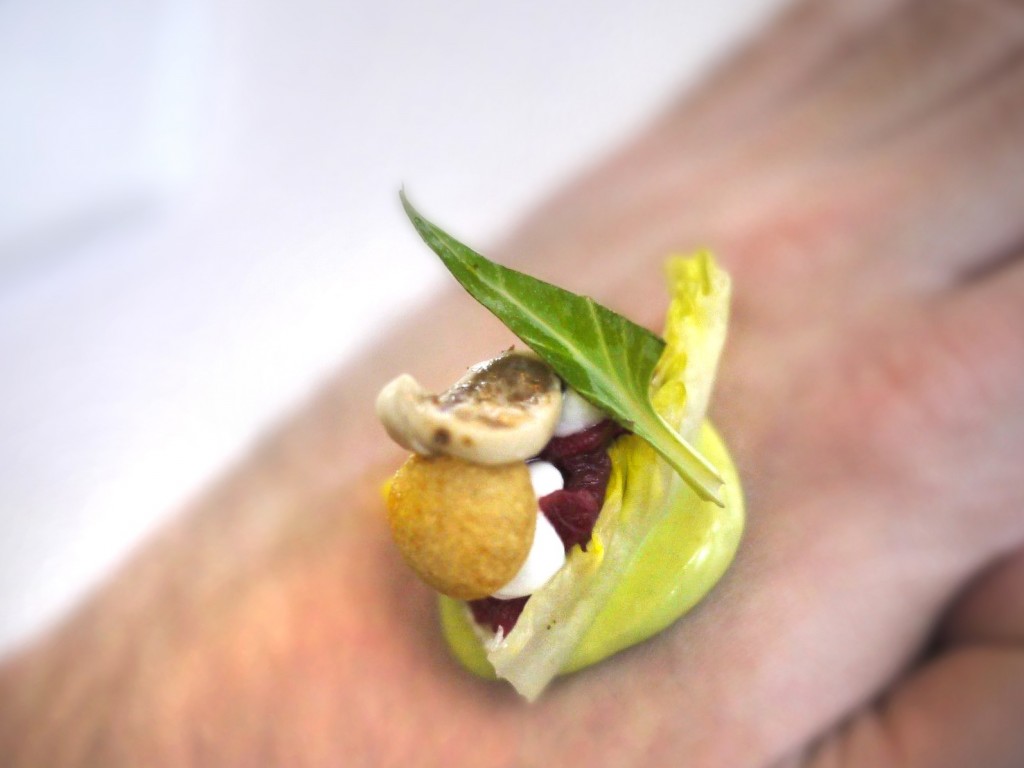 … which he had tweaked from his original dish by assembling everything on the back of the diners hand using tweezers. Not only was the dish executed flawlessly with a perfect balance of seasoning from the oyster and sweetness from the basil and beef, but more importantly this was a chef who had a sense of humour and was not afraid to mark his own personality in his cuisine. 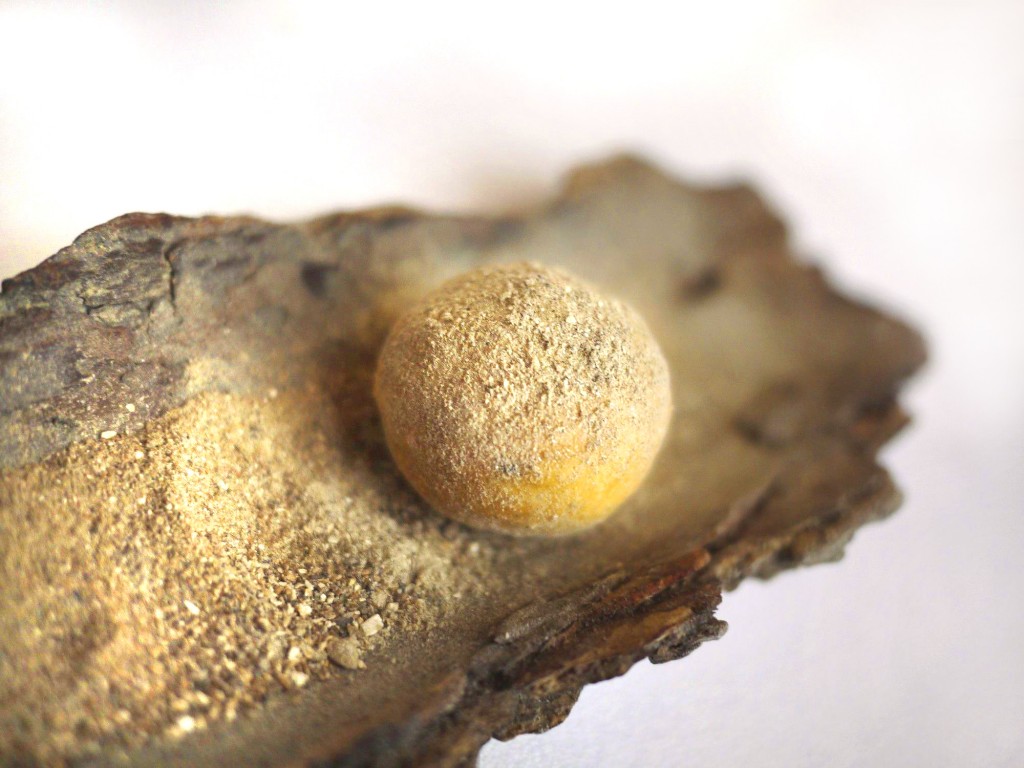 Just when I thought the amuse bouche could not get any better, I was left stunned by the simple Brioche with Mai-Take, having never tasted such an intense earthy mushroom flavour. It had a deliciously creamy centre that melted in my mouth. What astonished me was that the maitake, which I thought was uniquely indigenous to my native country of Japan, was in fact sourced locally from the region (as were the majority of the other ingredients). 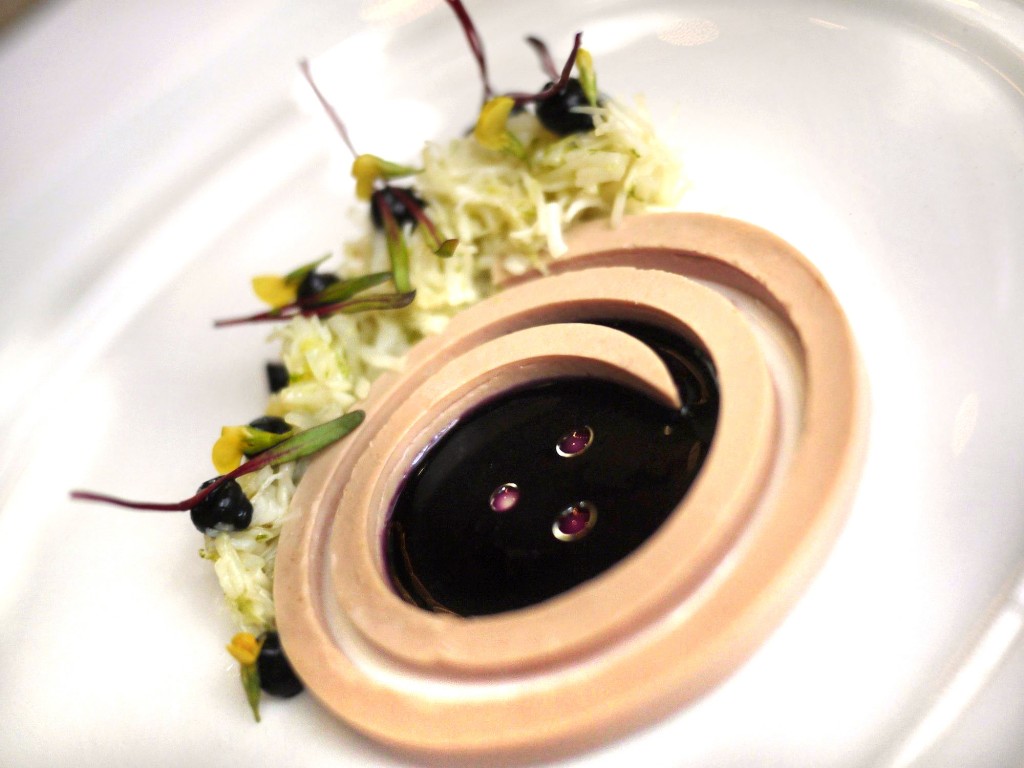 The most beautiful dish of the evening, Goose liver with North Sea crab, almond, black olive and juice of fermented red cabbage leaves. I never thought goose liver and crab would marry so well, and the magnolia in the crab provided a non-intrusive citrus aroma and flavour. The humble red cabbage juice was the star component providing a complex earthy flavour with a clean finish. The 2011 Weingut Stadt Lahr, Kabinett Trocken, Auxerrois was slightly aromatic with a floral note and a good balance of acidity. 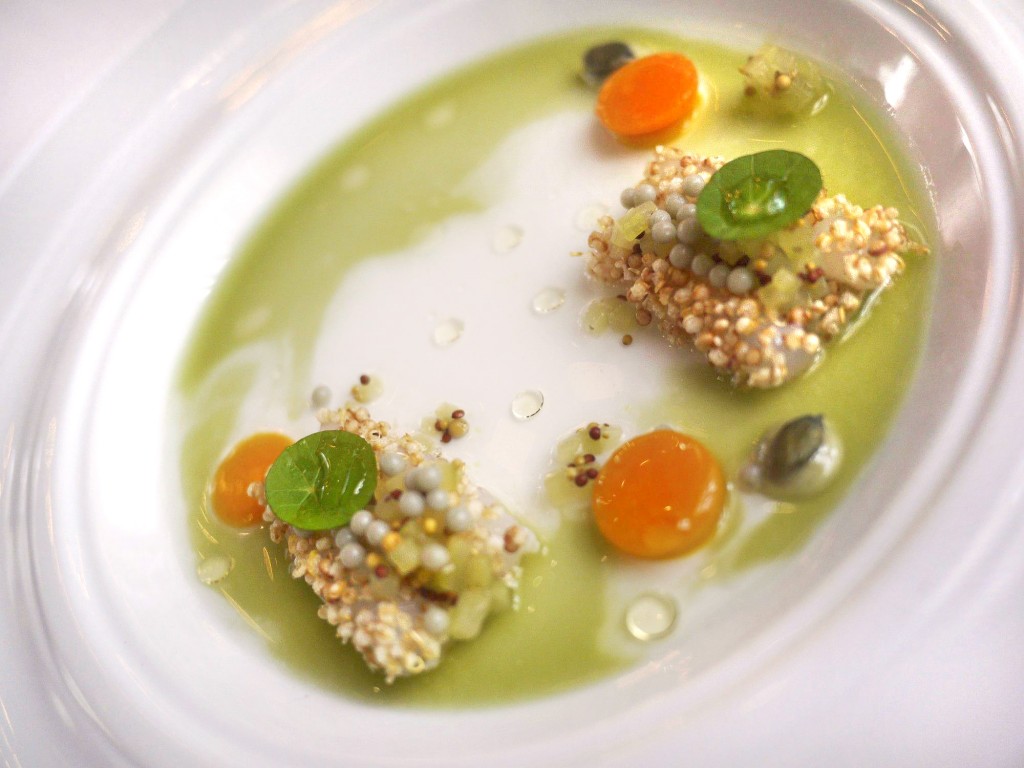 Therese poured me a glass of 2011 Domaine Cuhape Jurancon Sec, Courbu Gros and Petit Maseng to go with the Langoustine, distillate of cucumber and Fourme d’Ambert. The langoustine, grilled only one one side keeping the other raw, had a lovely texture and sweetness. The tiny grey balls of blue cheese were perfect to season the dish. The crunch from the pumpkin seed and the vegetable added textural contrast to the dish. 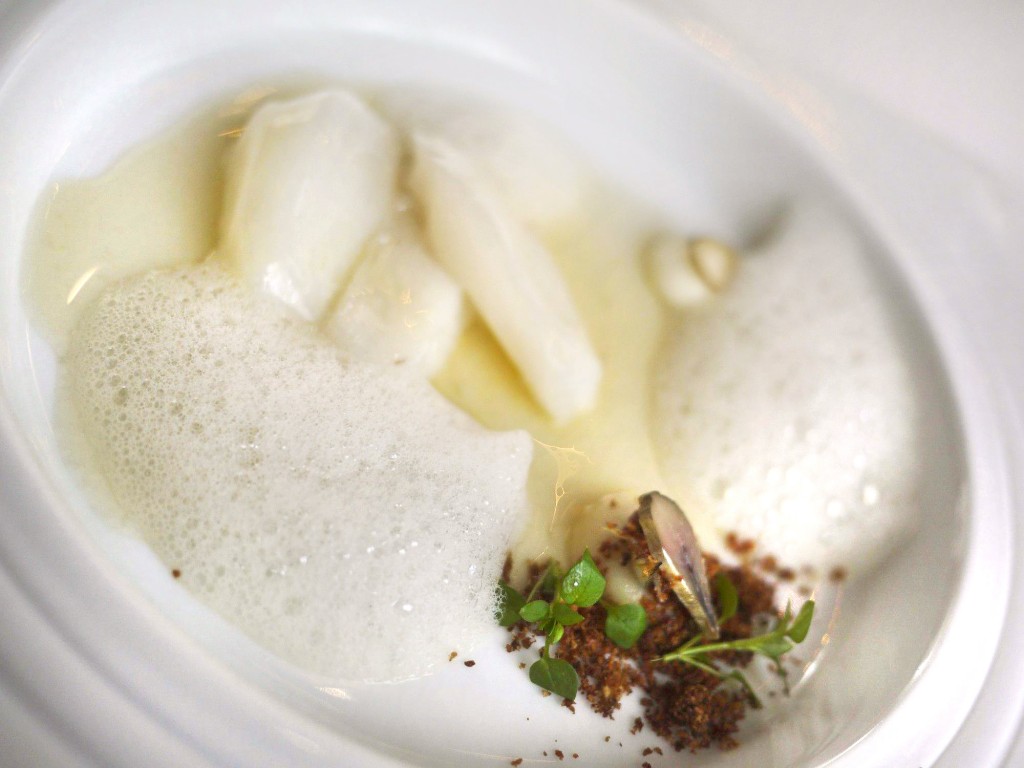 Cod, wet hazelnut, sprat and tea made of jerusalem artichoke flowers. Very light and silky texture of cod and the dried sprat was lovely in the middle. The earthiness from tea and the crunchiness from the hazelnut married well with the cod. Accompanying this was a rather less familiar but beautifully crisp and dry glass of 2011 Kerkaborum, Furmint, Hungary. 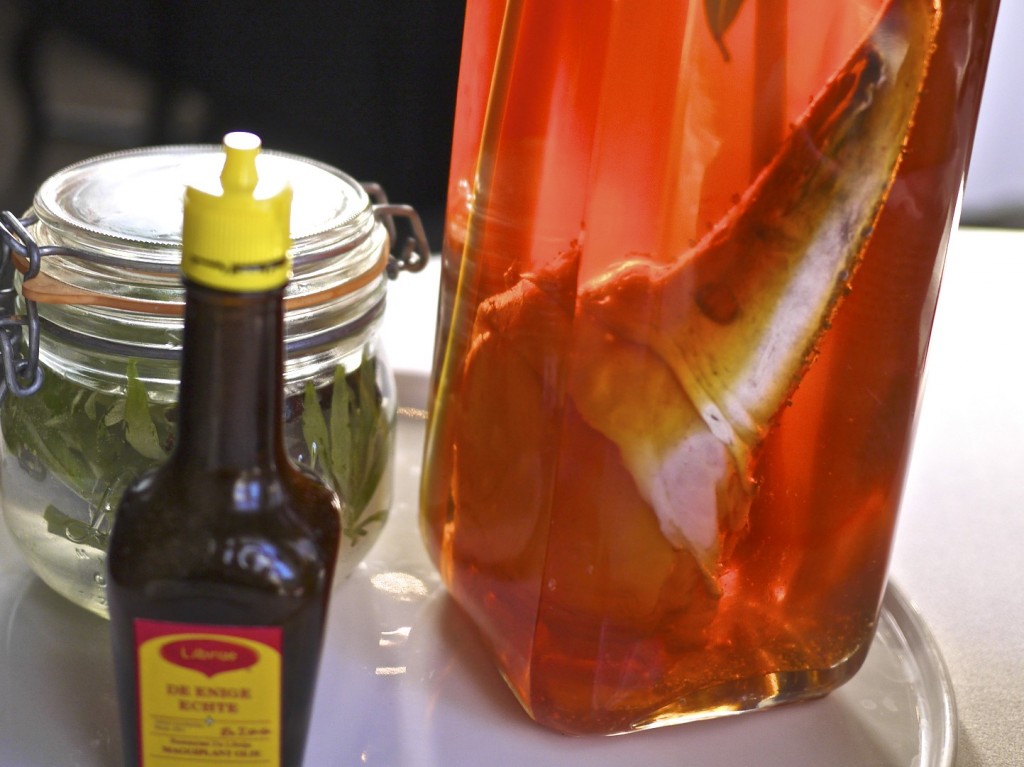 I was then presented a jar of the monkfish which they were about to prepare, pickled in baharat, a traditional middle eastern spice. The “maggi” sauce on the side was another play on word by Jonnie and was actually lovage oil. Admittedly there was a bit of “lost in translation” here for the non-Dutch speakers. 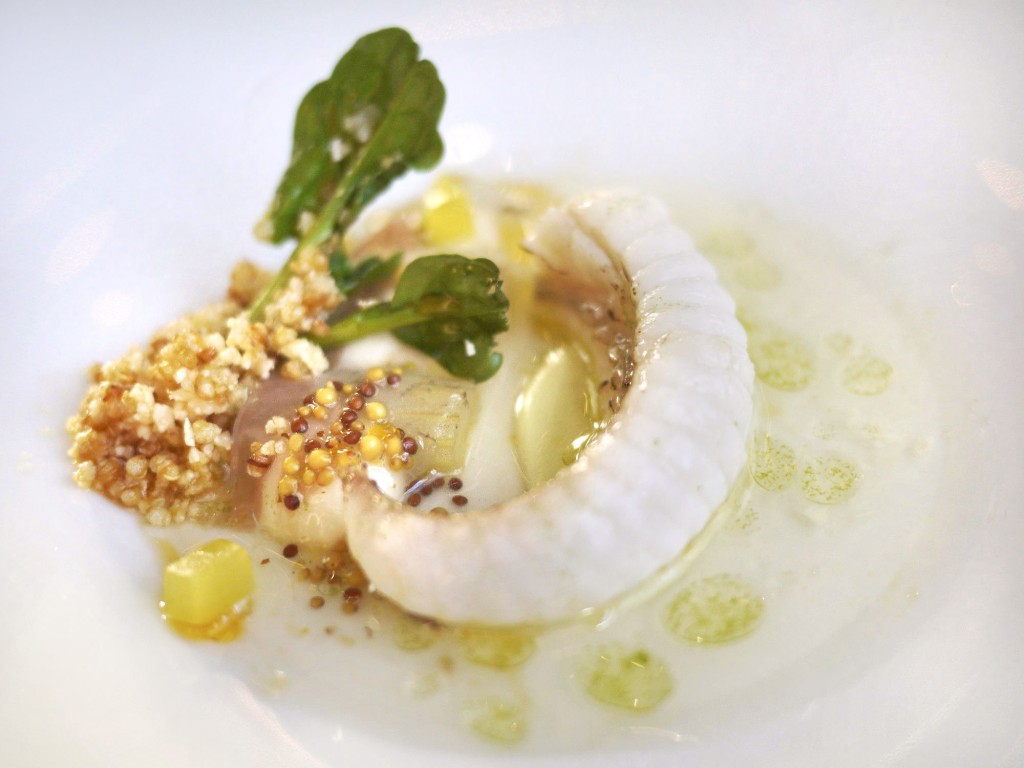 The complete dish of Monkfish, rollmops and baharat. The monkfish cooked sous-vide was juicy and tender and the seasoning of the dish from the bacon was spot on. It was, however, the slightly tart pickled gherkin soaked in rollmop juice that added a burst of flavour and life into a dish, which would have been otherwise only good; superb! The exotic herbal lemon, lime and spicy oak aroma with a nice balance of creaminess and a fresh tangy acid finish from the 2011 Chardonnay Stonier was a fine accompaniment. 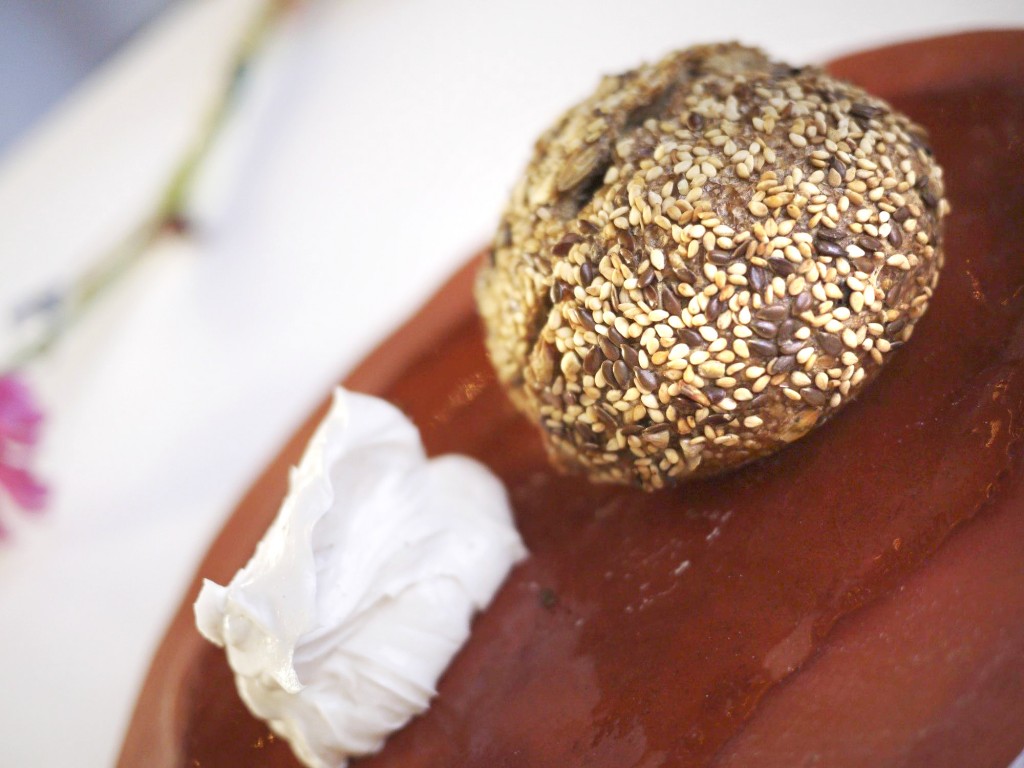 The baked bread made a reappearance and was served with a delicious goat butter and Rembrandt grape (also known as blue grape) cream to dip in. Therese simultaneously started pouring my next matching wine of the 2010 Mas Polit, Emporda which had an intense fruity and woody aroma with hint of blackberry, plum and powerful tannins. 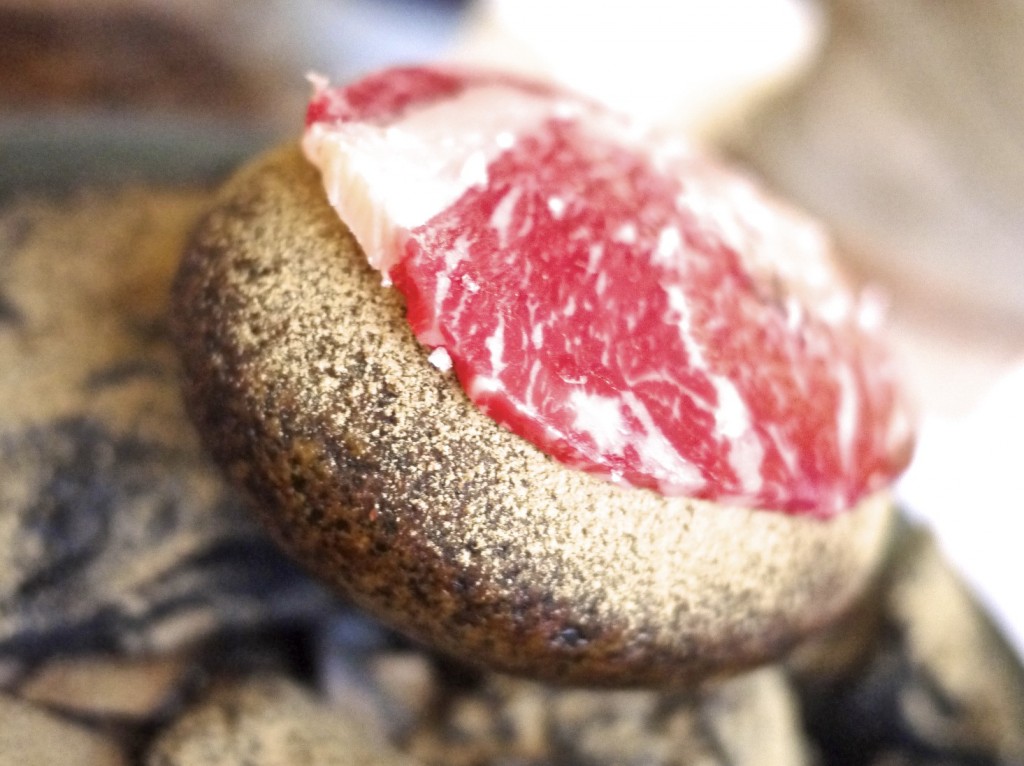 Jonnie came out himself to serve the next course which was the ‘De Veluwe’ Dairy Cow steaks, mushrooms, lemon geranium and calf marrow. The meat, which was sourced locally, was seared on a rock that was 140°C hot and coated in powdered ceps. Through this method he managed to seal and infused the flavour of mushroom into the steak… 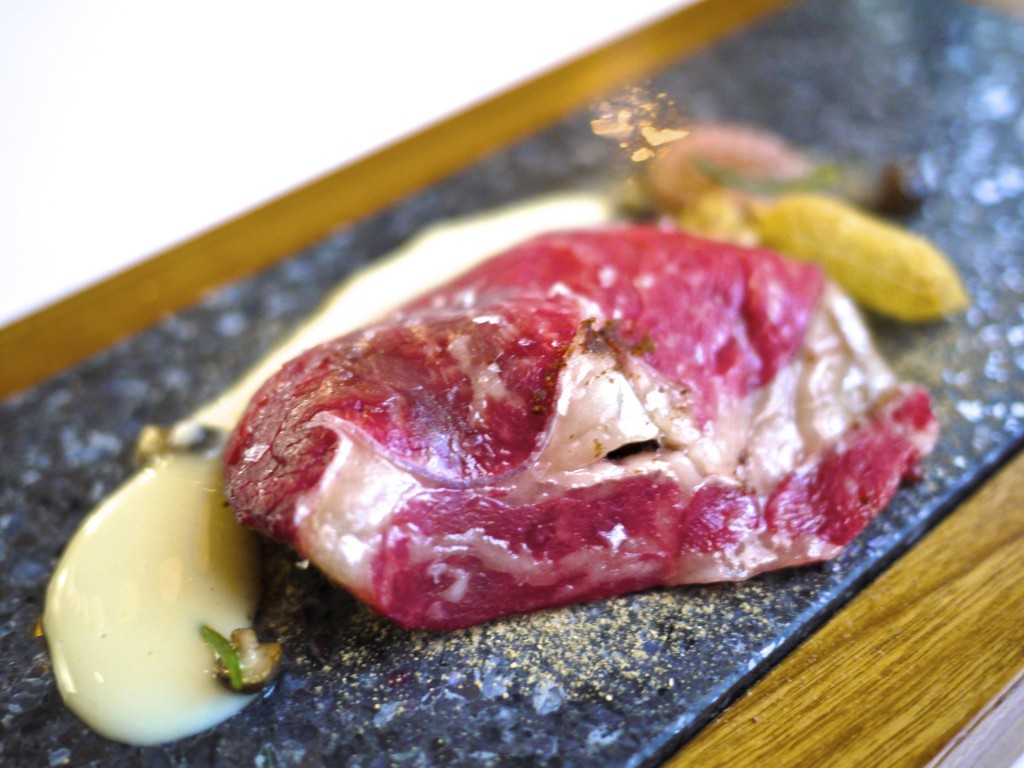 … and proceeded by serving the meat over the calf marrow which melted and added a rich buttery layer on the crispy potatoes underneath. Each bite was an explosion of flavours that I wished would last forever, but as with all good things, they had to come to an end. 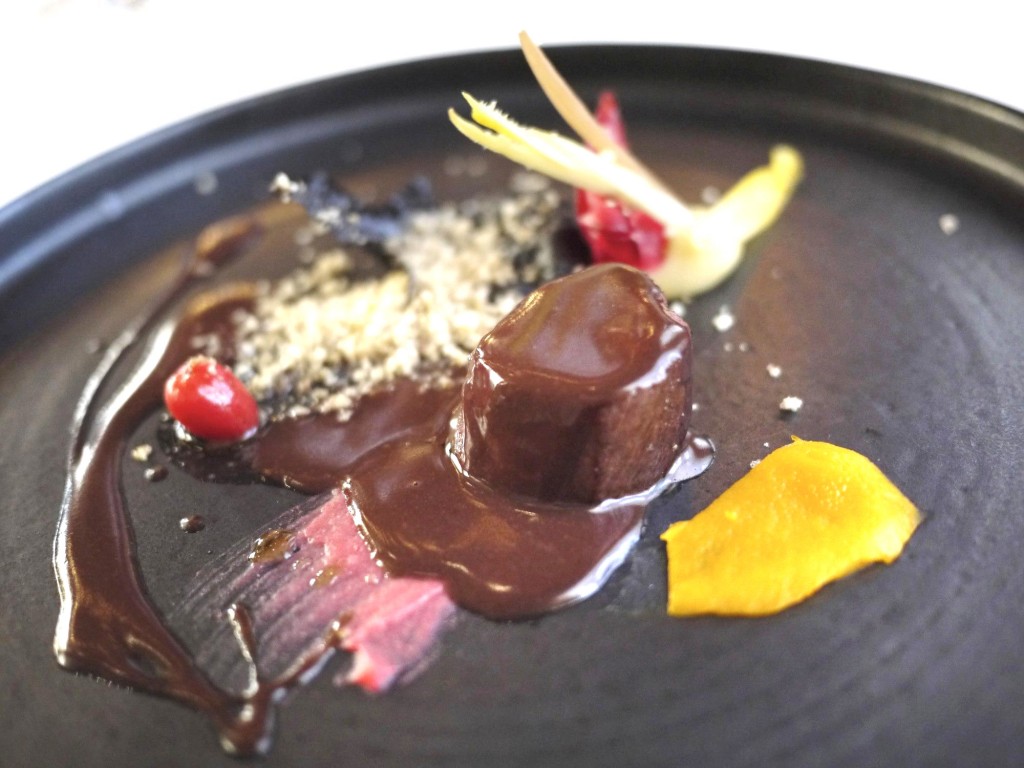 Roe, chicory sprouts, picked cornus and emulsion of black pudding. The roe deer was perfectly cooked and served with a lovely jus. The pickled cornus, closely resembling to cranberry and sour cherry, added a lovely acidity to the dish and cut through the rich meat. The accompanying “super tuscan” of 2009 Petra Ebo Val di Cornia Suvereto Rosso, Tuscany, Italy was smooth with flavours of blackberry and a hint of oak and eucalyptus notes. 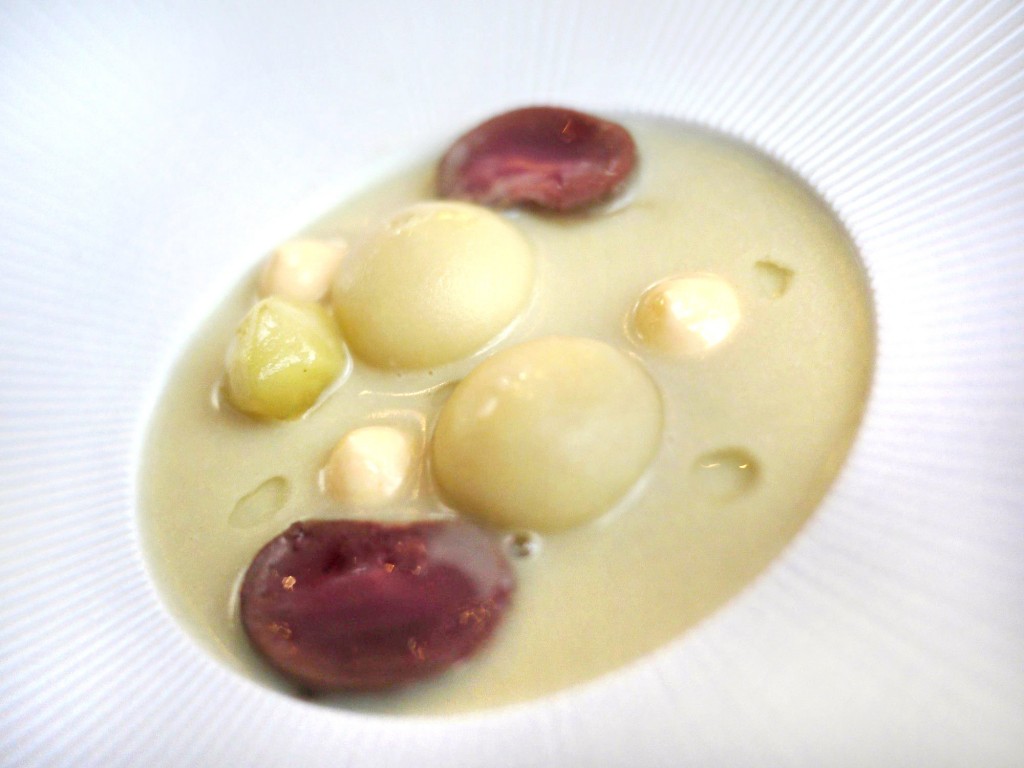 Jonnie’s choice of cheese was unexpectedly a French Epoisses, served with rabbit kidney and potato juice. The pungent cheese from Burgundy cleverly cleansed the intense flavours of kidney and the creamy potato juice, which resembled to that of a potage, canvassed and prolonged the bursts of flavours. The wine Therese chose to match this was a Macvin du Jura which was rich with flavours of orange zest, prunes and drieds fruits. 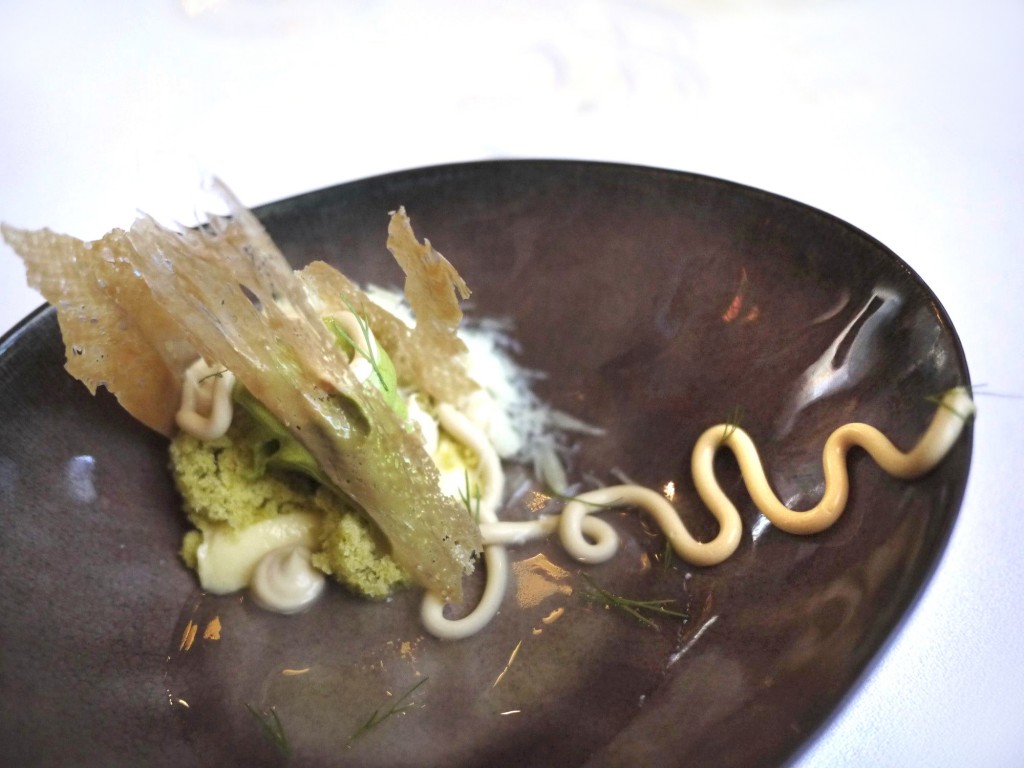 The Roasted white chocolate, bergamot and dill had a good balance of flavours whilst the bergamot cleansed my palate from the preceding cheese course. The 2012 Wirra Wirra, McLaren Vale, Moscato was juicy and bright with a lovely lychee and melon flavour, but…. 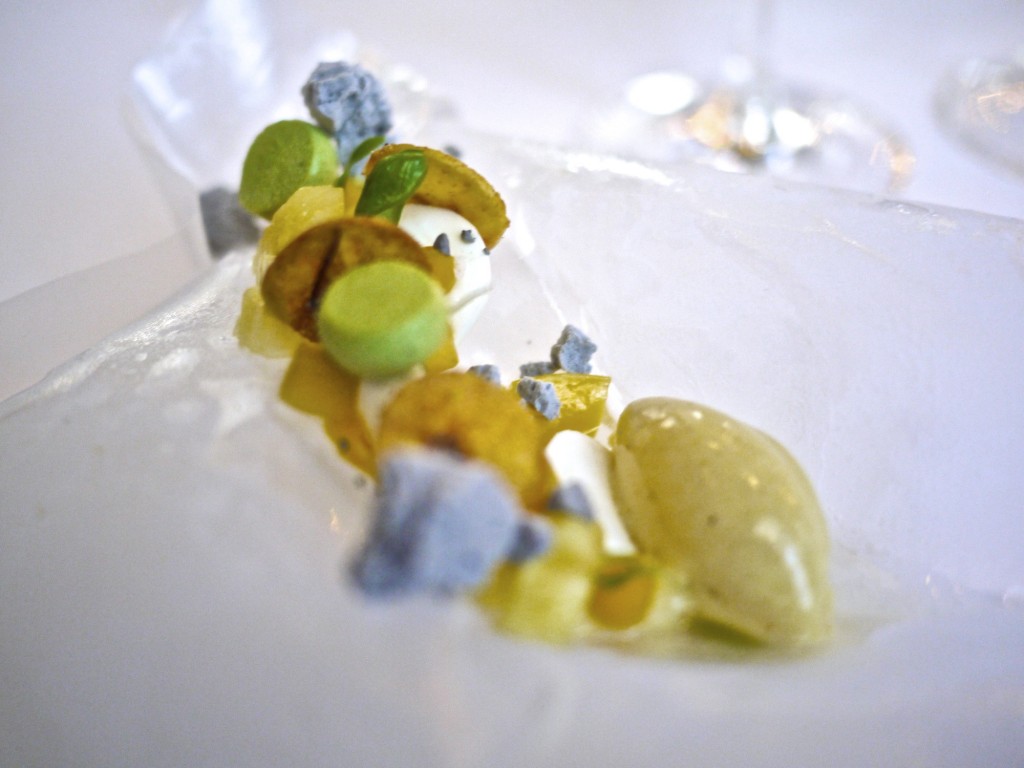 …I was far more intrigued with the unusual Sweet Thai “green curry” served on an ice bag. The mango sorbet, fried bananas, basil, meringues, ginger beer and black sesame which had been pureed and passed through liquid nitrogen married well with the spicy curry and ginger. It was an unusual but fun and memorable dish that was a clever interplay of textures, as well as the savoury, spicy and sweet flavours, creating a lovely warm feeling on the palate despite it being refreshingly cold! The accompanying yuzu sake was so refreshing I cheekily asked for a top up. 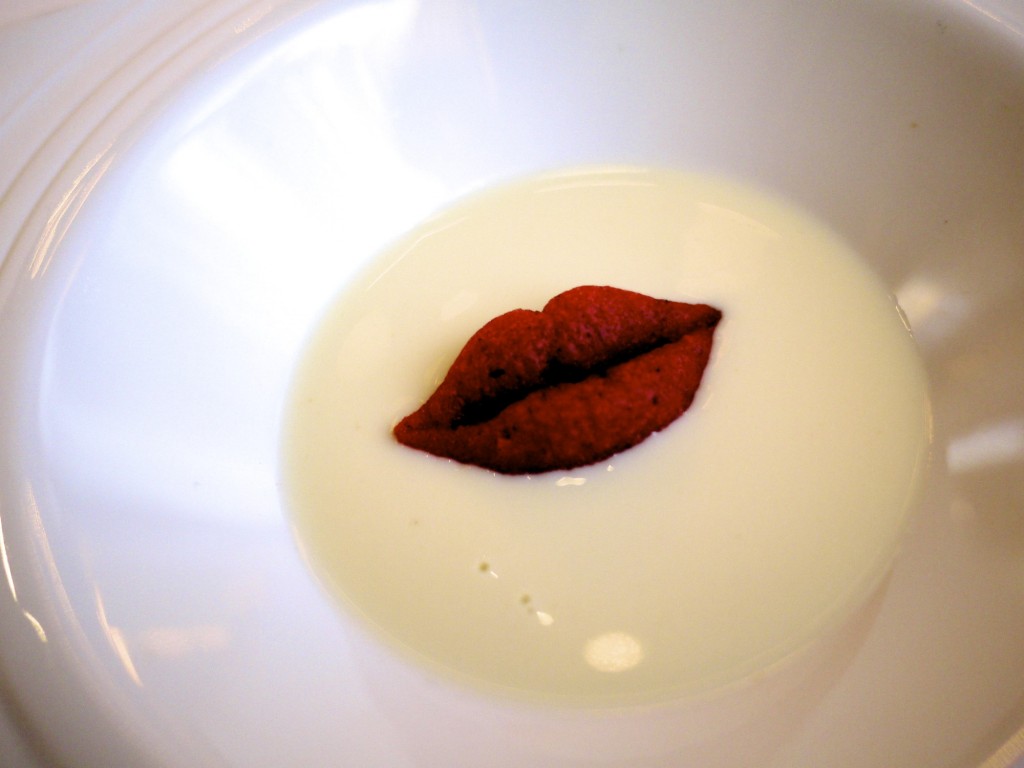 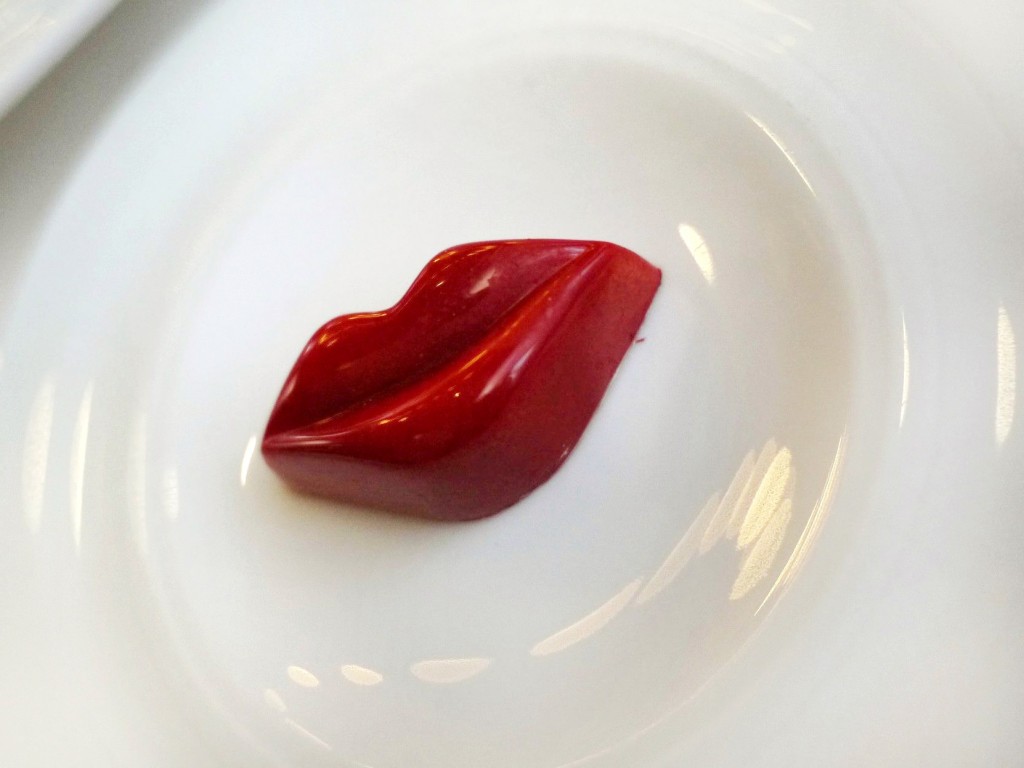 “Kiss from Therese” with mango 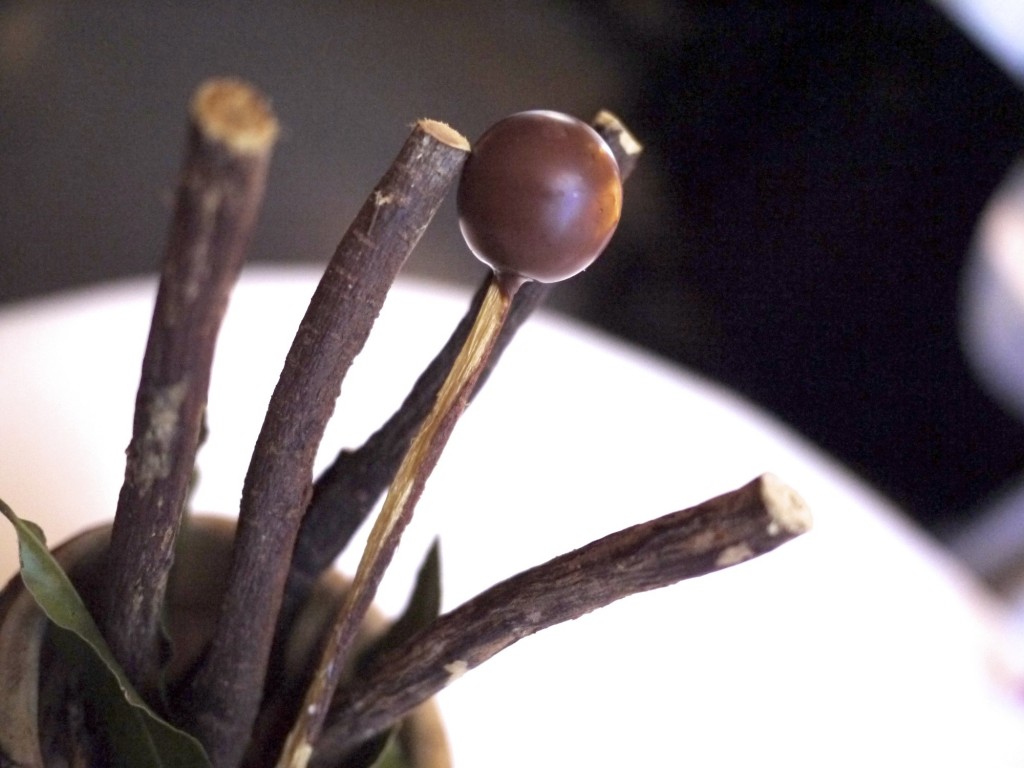 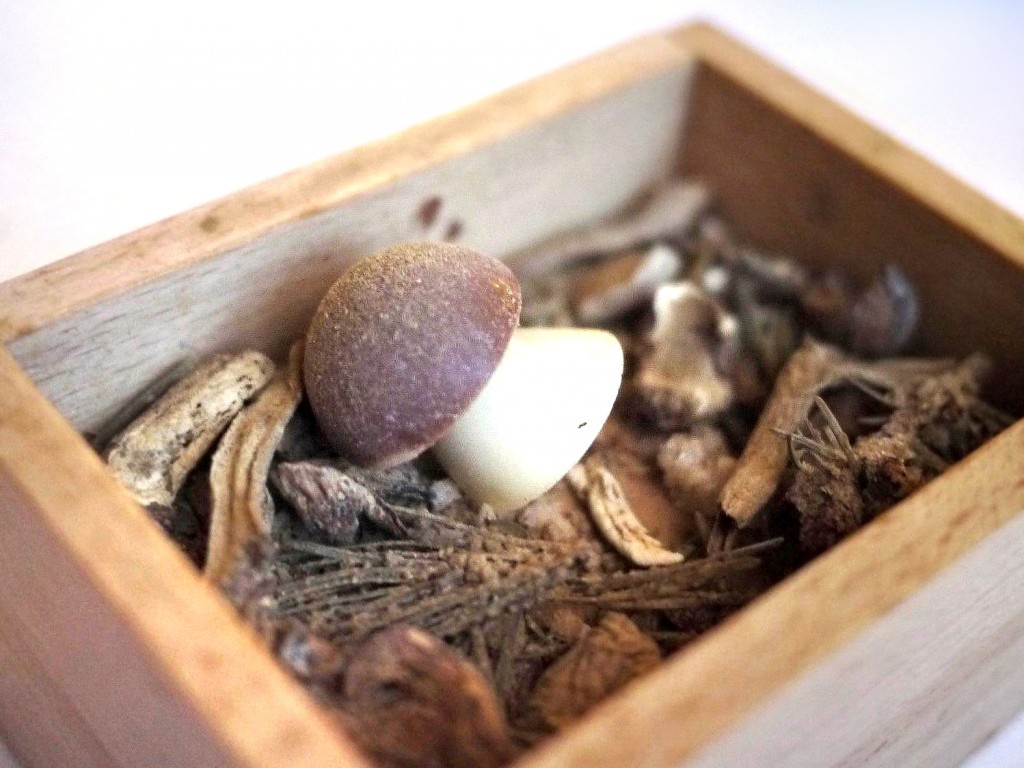 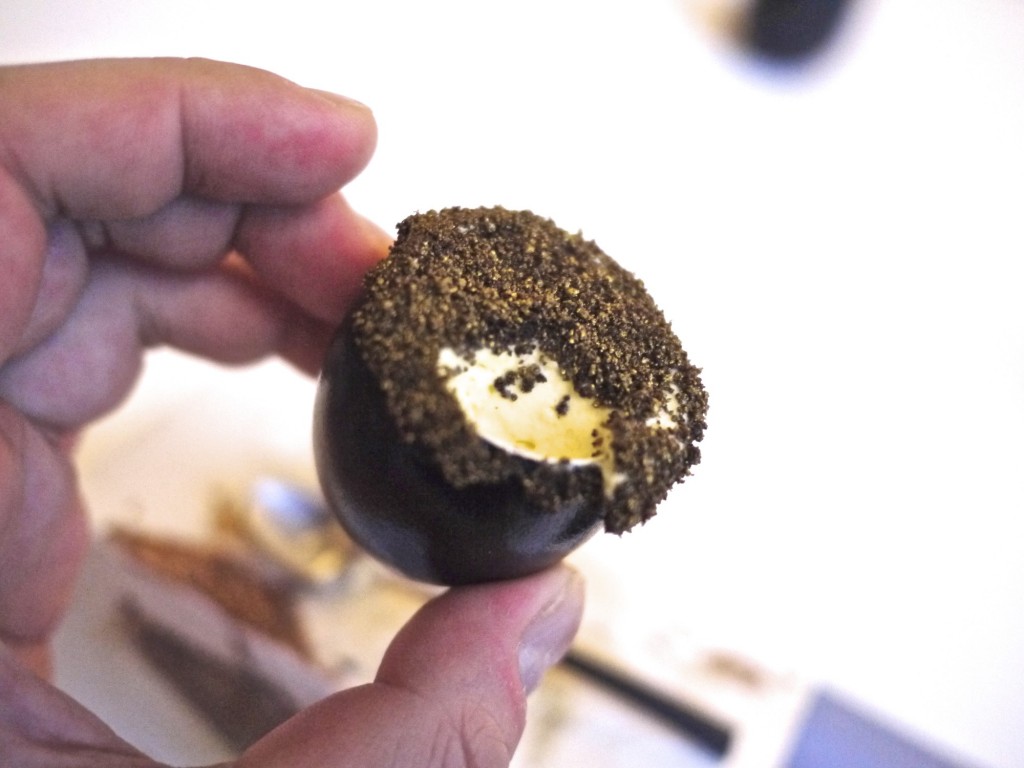 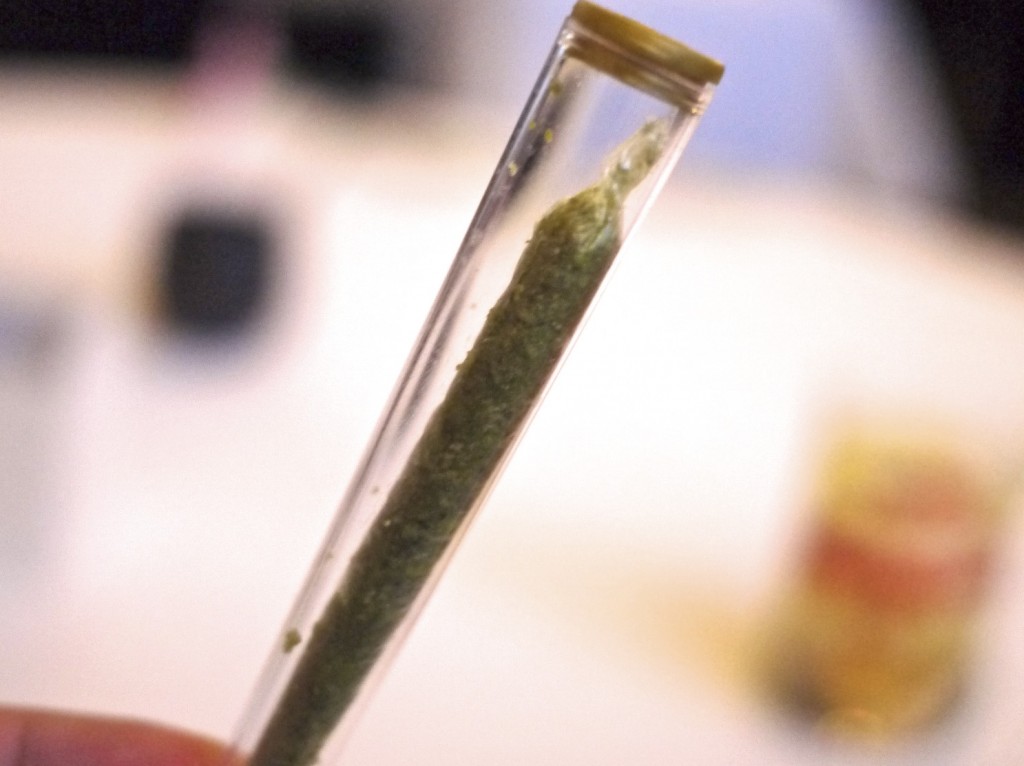 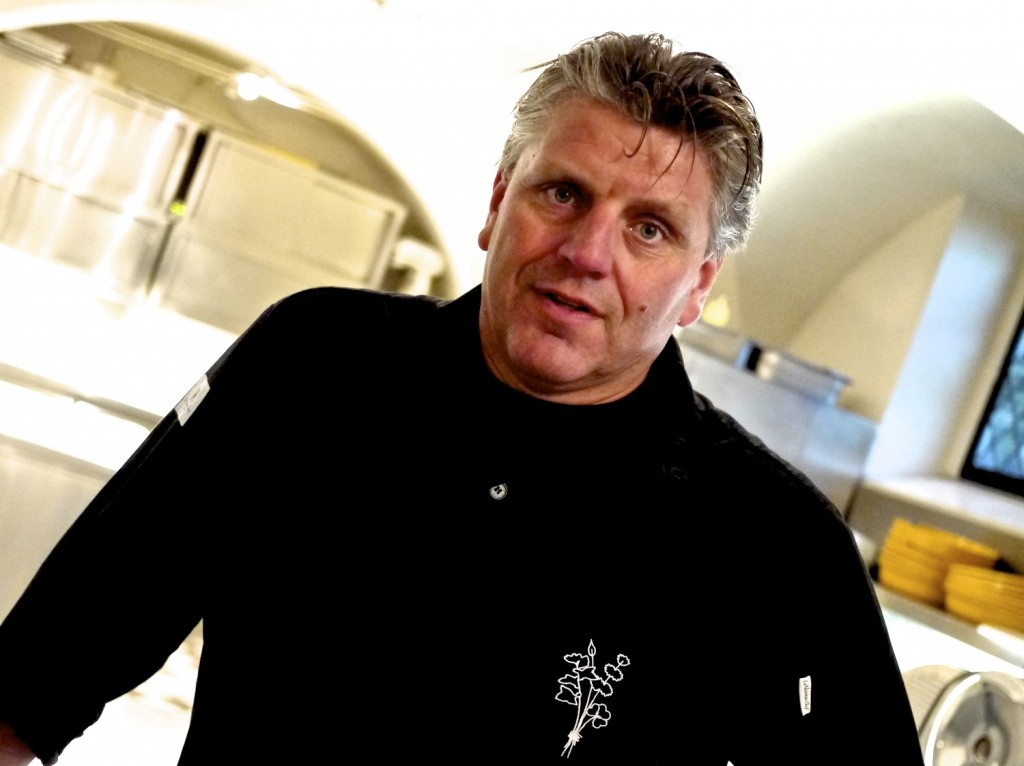 There are many reasons why I think De Librije is currently one of the best restaurants in the world. The confidence Jonnie exerts over his cooking skills and palate is apparent from the way in which he daringly combines flavours and textures that are sometimes construed unconventional, yet works magnificently. The frivolity and playfulness underplaying the seriousness and hard work going into every single one of these incredible dishes reiterates Jonnie’s humility. I look very much forward to seeing how his food evolves.