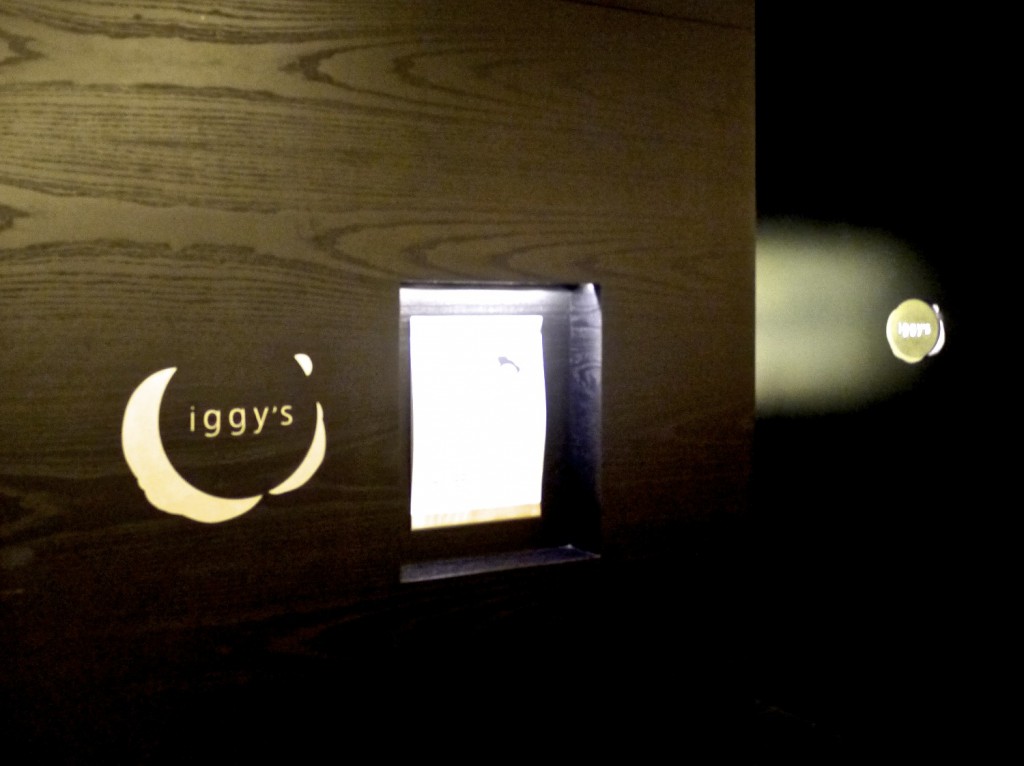 I always had a soft spot for Singaporean food because it epitomised the diverse rich culture brought over by the regional migrants. The local dishes sourced from regional fresh produce spoilt diners for choices offering a variety of curries, freshly caught seafood, juicy tropical fruits and delicious desserts. Recalling all these wonderful food that was being offered for a pittance at the hawker centres, I kick myself every time I think about my meal at Iggy’s in 2011.

I only had time for one meal on my stopover from Melbourne to London, and given the hype around Ignatius Chan’s restaurant, I thought I’d organise a meal to catch up with my old friends and kill two birds with one stone. Little knowledge did I have that I was about to have my worst fine dining experience, to date. 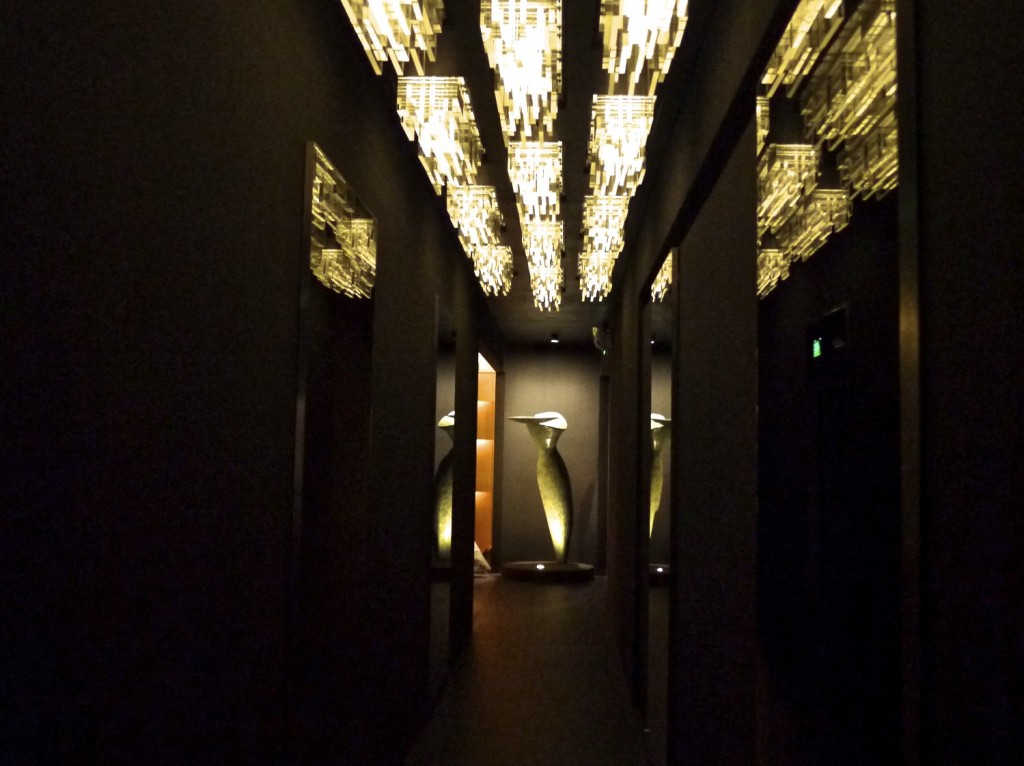 Stepping into the restaurant, whilst I didn’t find the décor in bad taste, I found the absence of any natural light rather disconcerting and claustrophobic. This was a different level of darkness compared to other restaurants such as Guy Savoy in Paris which at least had a few skylight windows; three hours of tasting menu in a dim room. Great, I only had just got off the plane!

Before I get into the detail I want to get two things out of the way. This review is based on a meal I experienced in May 2011 and not necessarily reflect the current standard. Secondly, the service throughout that evening was very good and I really couldn’t fault a single person attending us. I created a great rapport with one of the waiter and the sommelier chose a familiar but nevertheless delicious bottle of white Burgundy to go with our meal. So no qualms there!

The food that evening in general, however, was uninspiring, tasteless at times and certainly lacked consistency in terms of style and substance. Glancing at the menu, it felt as if Iggy’s was just showcasing the best produces the world had to offer without the ability to marry the flavours together. I would even go as far as saying that I tasted a dish with the worst combination of flavours ever, but let me come back to that later. 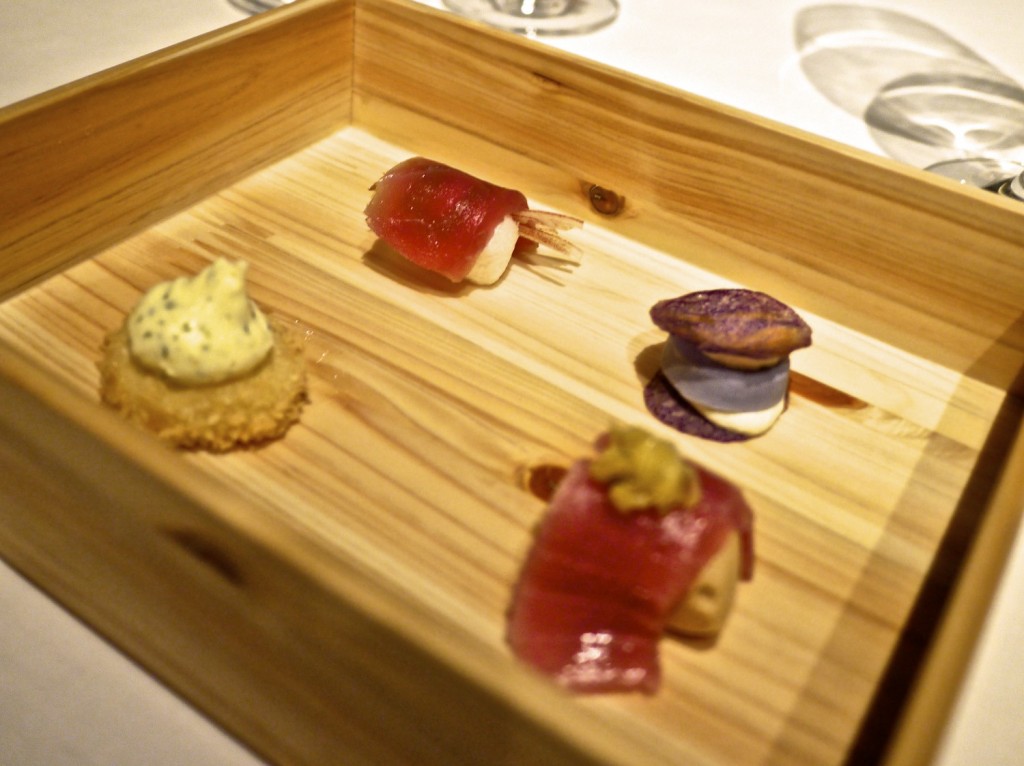 The amuse bouches was a medley of fish comprising of tuna with ginger flower and meringue, violet potato ice cream and potato crisp, cod croquette with citrus emulsion and toro marinated in chrysanthemum. It was probably the best dish of the evening although I must admit there was little seasoning which meant you could taste the slightly fishy flavour of the tuna. 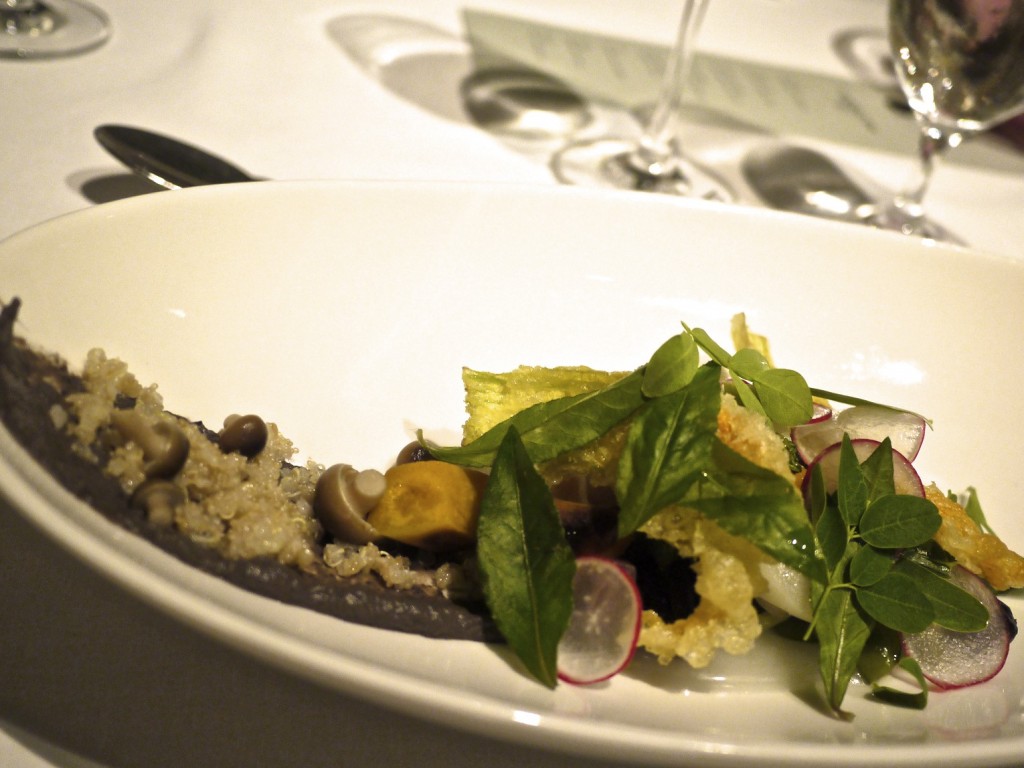 The vegetable dish, From the Garden, which failed to even come close to replicating Michel Bras’ Gargouillou was a good example of what happens when you rely too much on foreign produce. The vegetables did not look or taste remotely fresh which was understandable given they were most likely all imported. It was a shame because there was a lot of work put into the dish as they managed to incorporate thirty different ingredients on the plate. It was also a bit oily to my liking for a vegetable course. 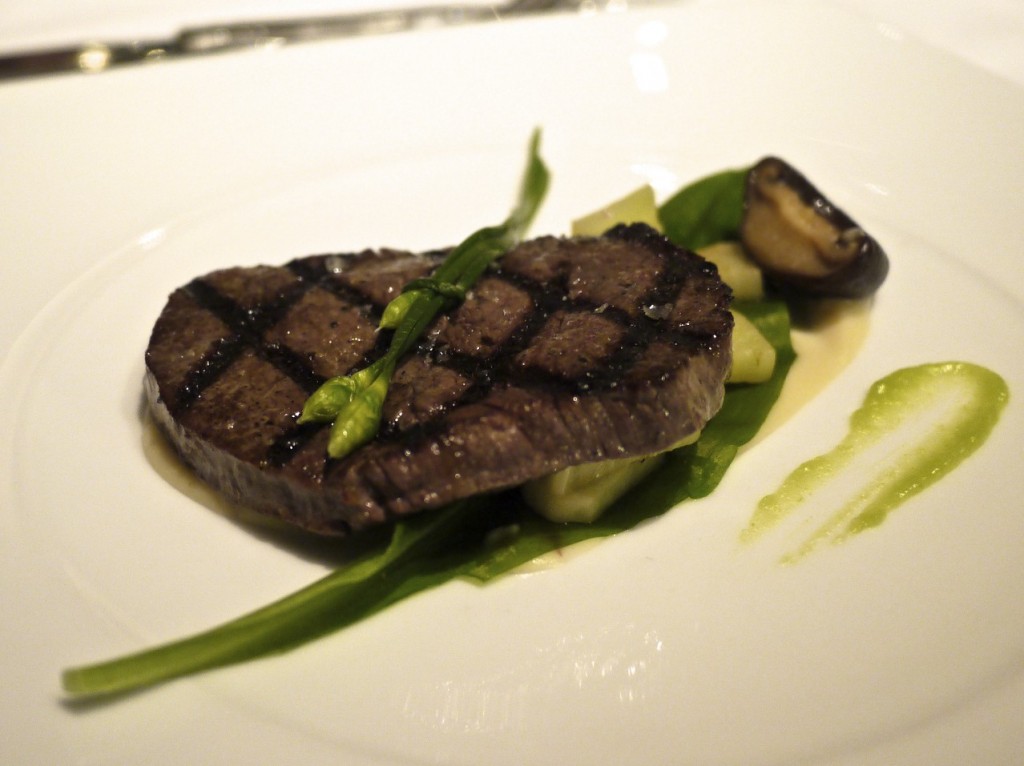 The main course of the wagyu tenderloin with pink garlic and mushroom was the biggest disappointment of the evening. I’d tried Australian Wagyu a week before at Vue de Monde, which was sublime so I was looking forward to it. However, I found these steaks were overdone with chewy texture and the pink garlic was lost in the midst of this otherwise one-dimensional flavour. 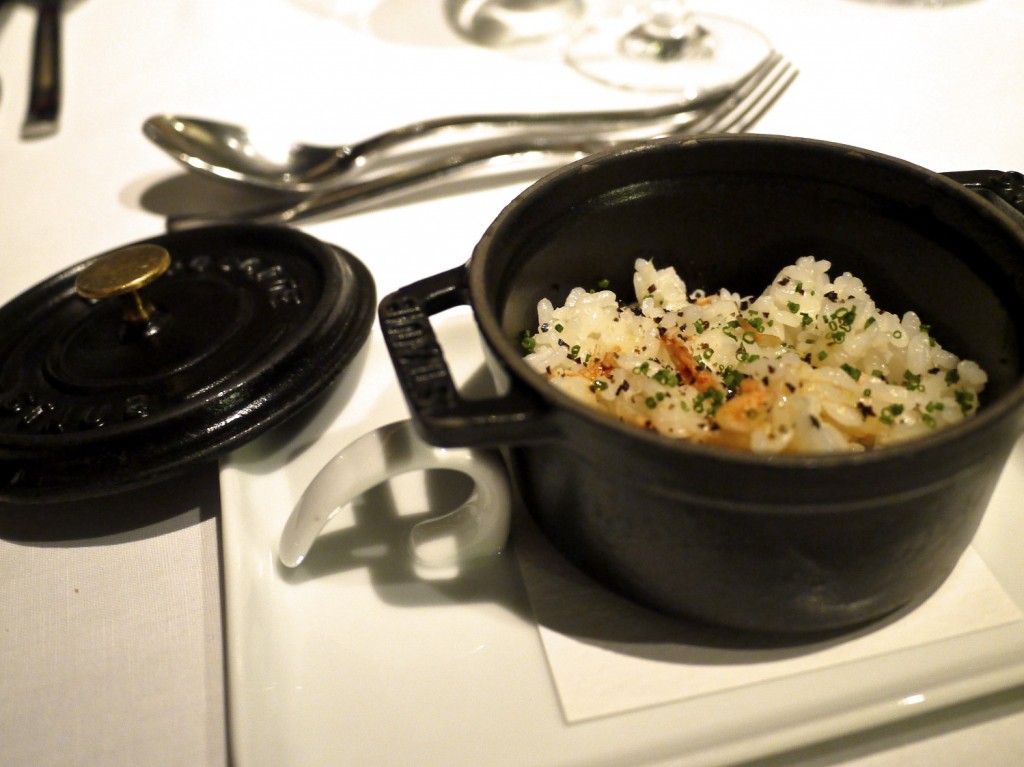 The rice, sakura ebi, konbu and shellfish oil had hardly any flavour and the delicate prawn was lost in the oily texture. What I found particularly odd was that this rice course was served after the steak course. This seemingly incomplete dish lacked substance and it was overshadowed by the preceding course. Perhaps this is why restaurants traditionally serve light and delicate dishes such as seafood before the meat course. 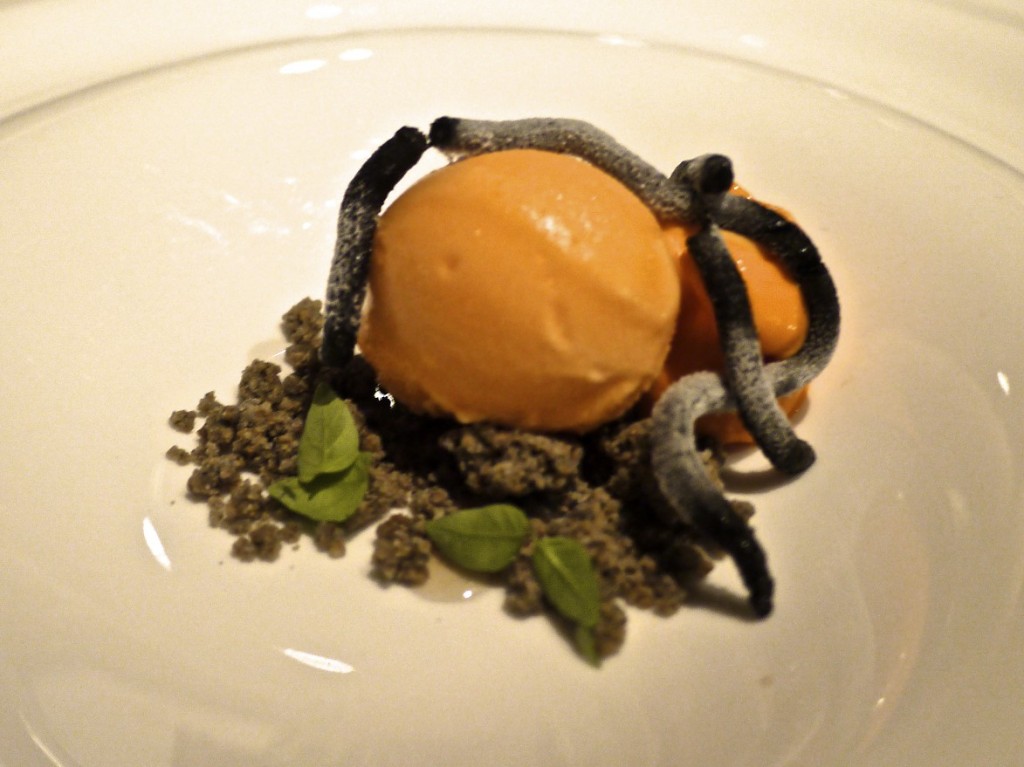 When I order a tasting menu I am almost always full by the time the dessert arrives. In this case however, I was looking forward to the dessert course, as I was still very hungry! The irony was that the carrot, pineapple and black sesame dessert course was possibly the only dish where I could not get beyond a mouthful. The pineapple sorbet was delicious and refreshing on its own but the liquorice praline and black sesame that accompanied it was just plain wrong. This was worst flavour combination I’ve ever come across, yet I enjoyed all the components on their own.

It pains me to think that this highly unoriginal restaurant was voted as the best that Asia could offer. How could this be considered superior to the vast number of remarkable restaurants in Japan like Kikunoi or Ryugin, or Amber in Hong Kong? Evidently the hefty price tag of $250 SG for the tasting menu is necessary to cover the cost of importing luxury ingredients like black caviar and wagyu beef. However, it is clear from this experience that expensive ingredients do not necessarily produce great or even good dishes. At a time where locality, seasonality and ethical sourcing has taken centre stage, it’s quite a statement to heavily rely on foreign products. When I was there two years ago, it appeared to me that Iggys was lost without a culinary direction. I hope that they’ve finally sorted themselves out.