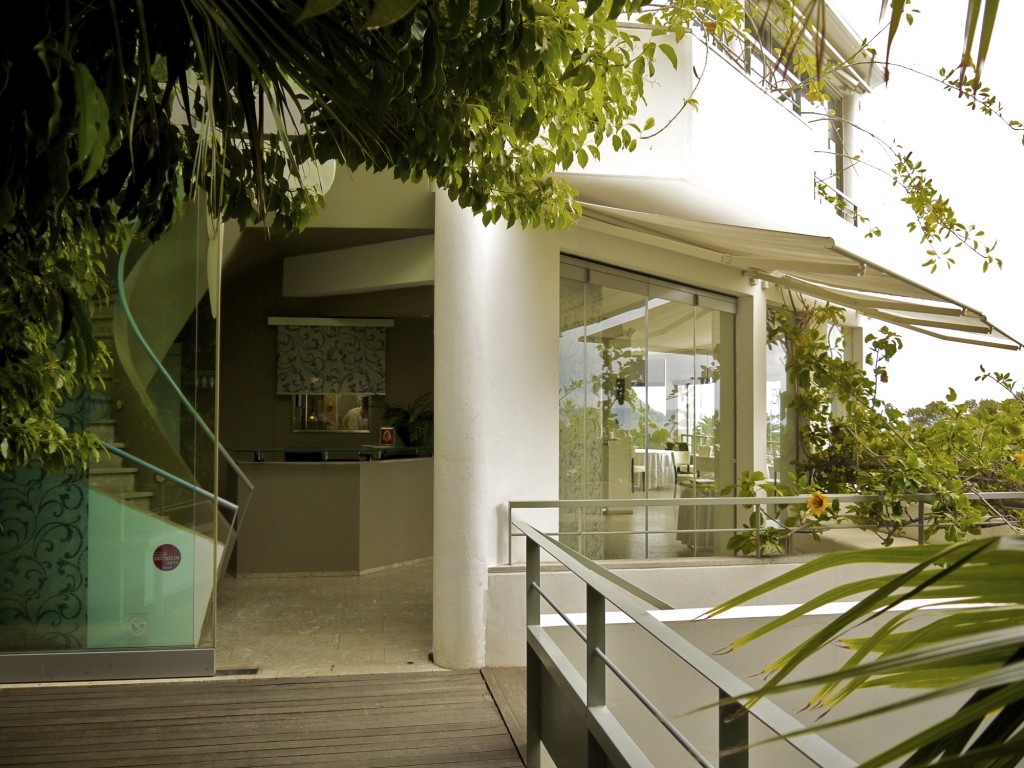 Perched on the hillside of the Franco-Italian border overlooking the glittering Mediterranean sea and the Côte d’Azur is Mirazur, a two-Michelin starred restaurant headed by the charismatic chef Mauro Colagreco. Colagreco left his native Argentina in 2001 to work under the notable Bernard Loiseau, Alain Passard and Alain Ducasse before opening his restaurant in Menton in 2006. Further to his impressive CV, Colagreco has defied the odds by becoming one of only a handful of foreign chefs on French soil that has more than one star to his name and become the first foreign chef to win the coveted title of Gault Millau ‘chef of the year’. 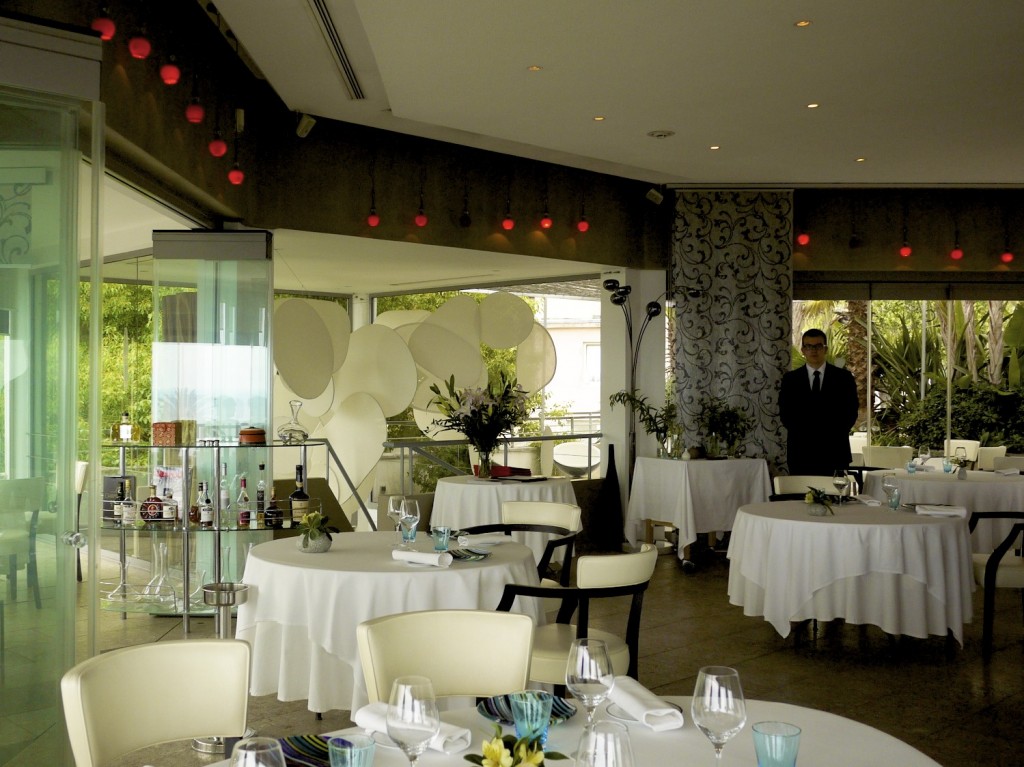 The restaurant occupied a 1950’s modernist building, redesigned by the architect Rick Mather, with the main dining room located on the top floor. Whilst the interior space was comfortable with ample space, I was glad to have requested the window table… 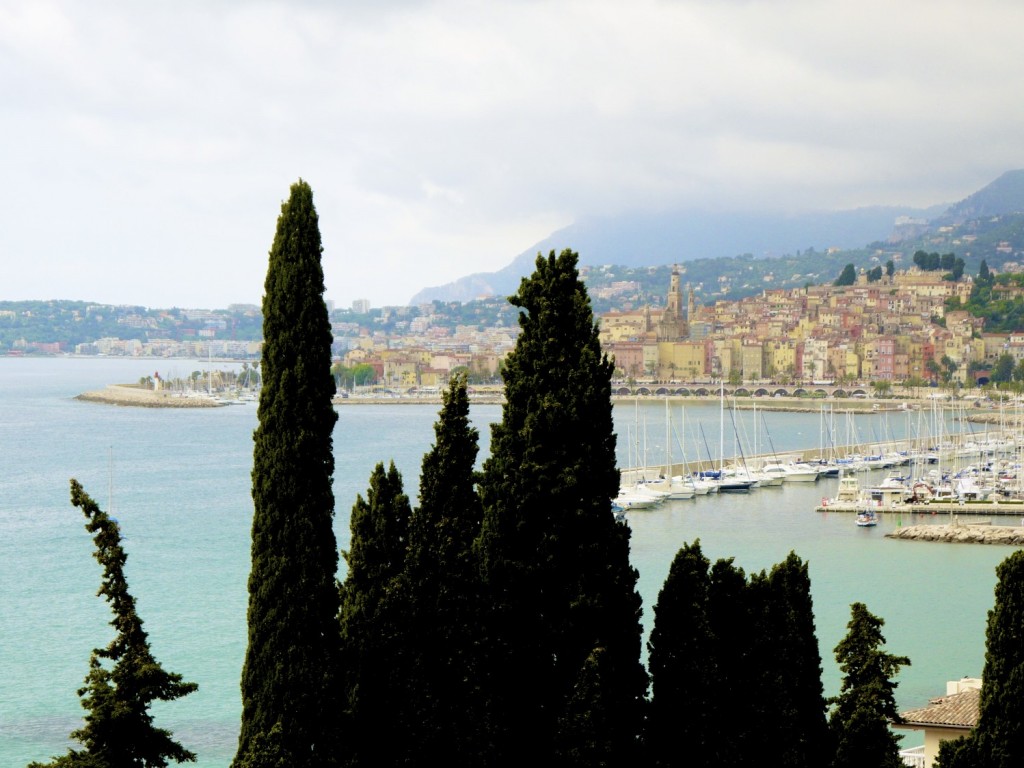 … which had a jaw-dropping view over Menton and afar. Unfortunately, the sun had disappeared for the rest of the afternoon but that did not dampen our spirit. The menu at Mirazur was entirely dependent on the fresh local produce available on the given day. Other than for allergies and dislikes, the kitchen had full control over the menu and all we could do was wait eagerly at our table as each course was brought out. We sipped our glasses of Billecart-Salmon Rosé as our amuse bouches were brought out starting with… 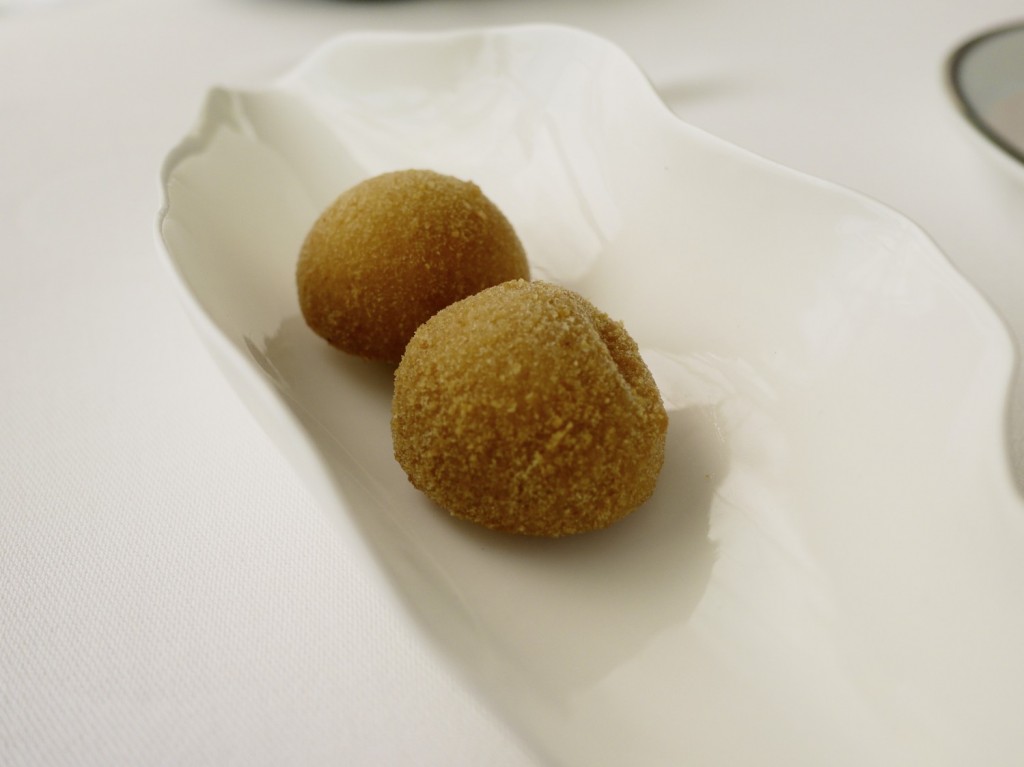 … Langoustine bonbon which was a crispy deep fried shell that contained a concentrated langoustine broth. It had to be eaten in one bite or you otherwise risked wearing the content. Delicate crustacean flavours which could have benefited perhaps from a bit more reduction to concentrate the flavour. 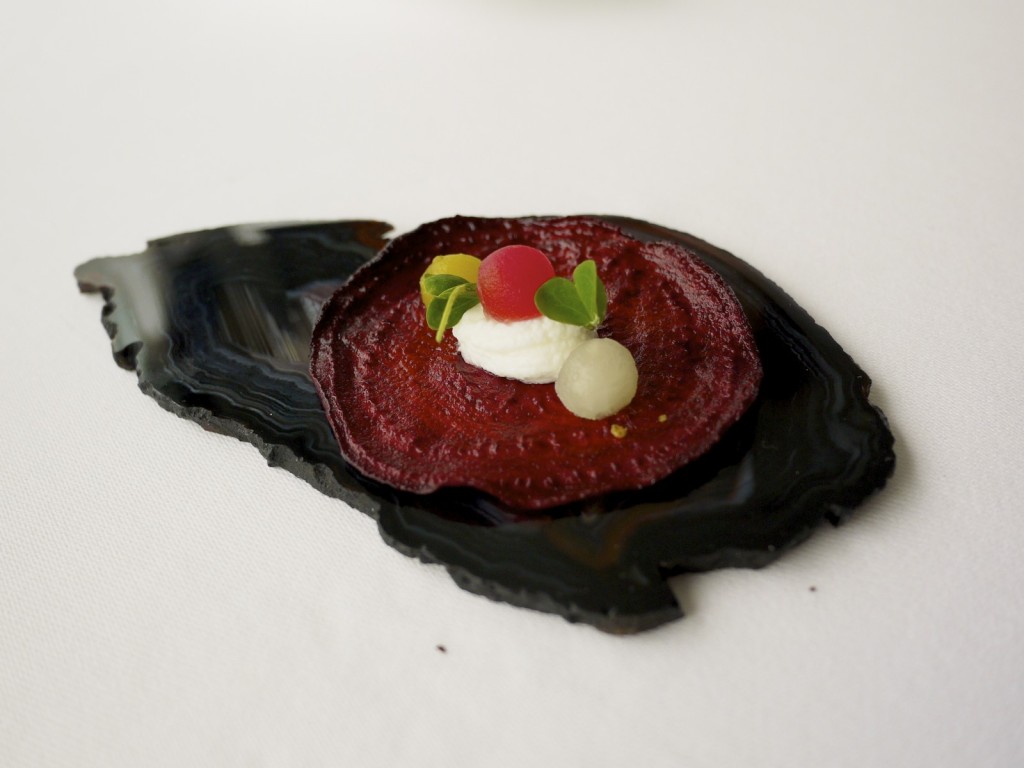 A sweet and tangy Beetroot chip with goats cheese and variety of beetroot balls which was very simple but delicious. 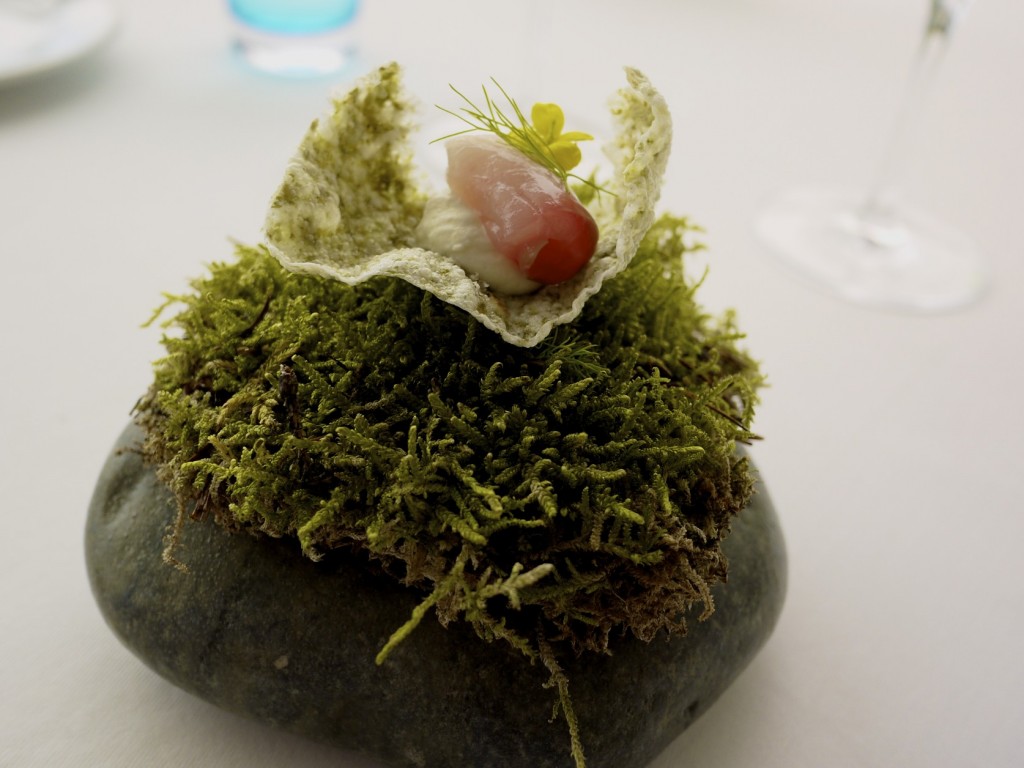 The ultimate amuse bouche of the Seaweed cracker with Norwegian salmon with a herbal mixture of mascarpone was an absolute delight. The slightly salty cracker with umami from the seaweed enhanced the fresh sweet flavour of the salmon. Wow. I was amazed to see how much flavour Colagreco managed to draw out from just a handful of ingredients. 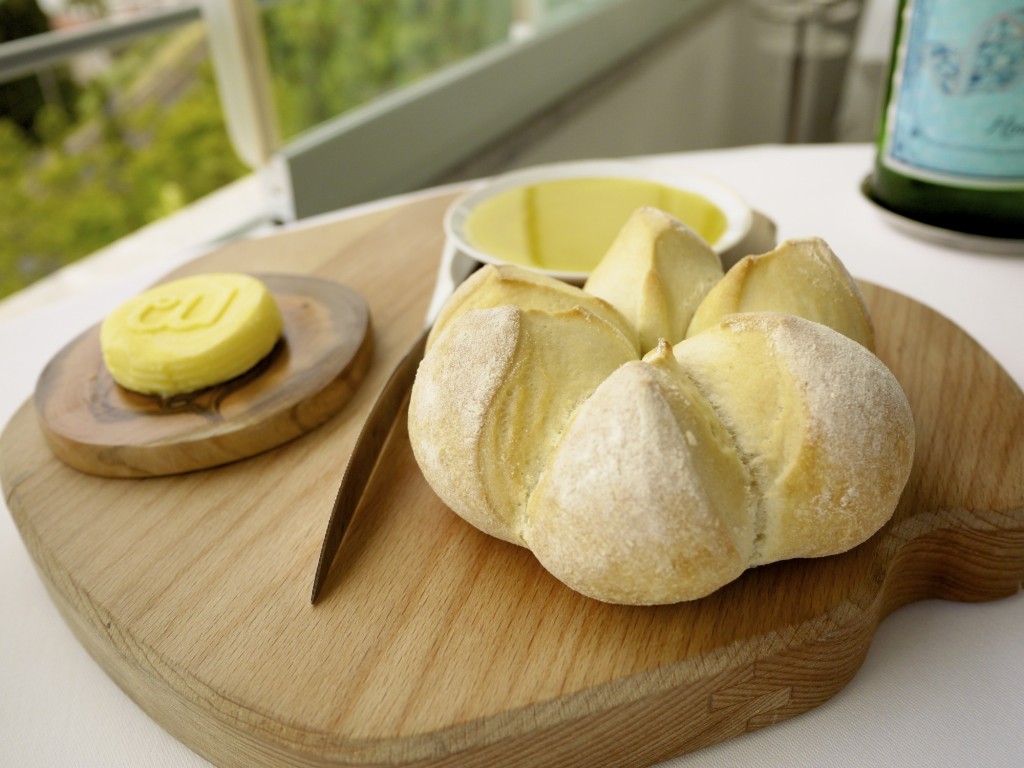 Next came a wooden board with a large loaf of sourdough pain de partage, literally breaking bread for sharing, as a gesture of welcome to Mirazur following the Argentinian tradition. It came with a generous amount of Menton lemon and ginger infused olive oil and butter. The bread had a lovely crusty exterior and fluffy interior, perfect for soaking up the aromatic and peppery olive oil. 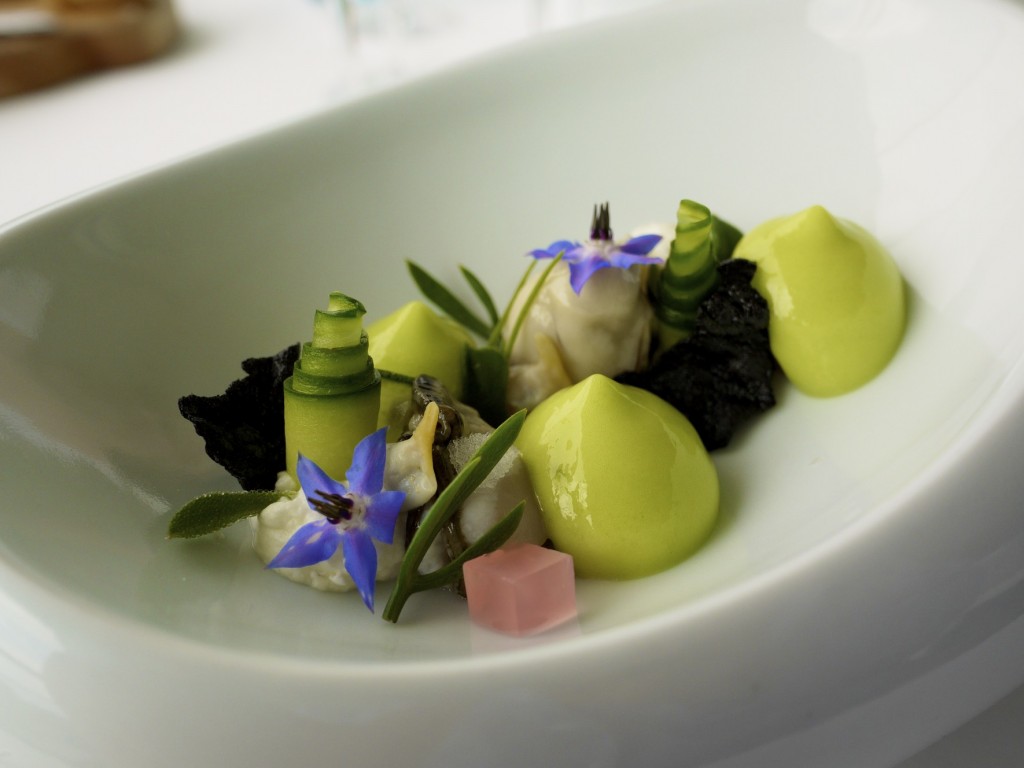 The first course of the Huitres au concombre set an extremely high standard and expectation for the meal to come. It was a beautiful marriage of flavours between the fresh oysters high in minerality, seaweed and cucumber served two ways – a refreshingly cool purée and slices rolled up. 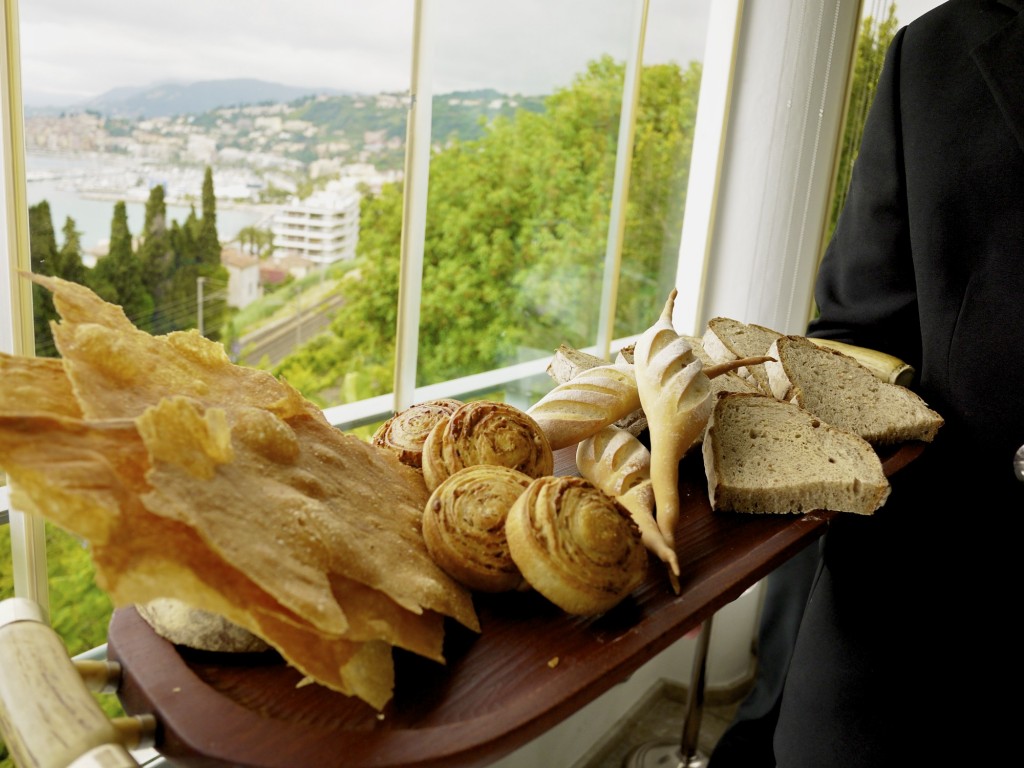 A good selection of bread was on offer including a cinnamon and almond roll, a sourdough rye, baguette and a flat and cracker-like textures pane carasau that had been seasoned in aromatic rosemary and sea salt. I went for… all of them! 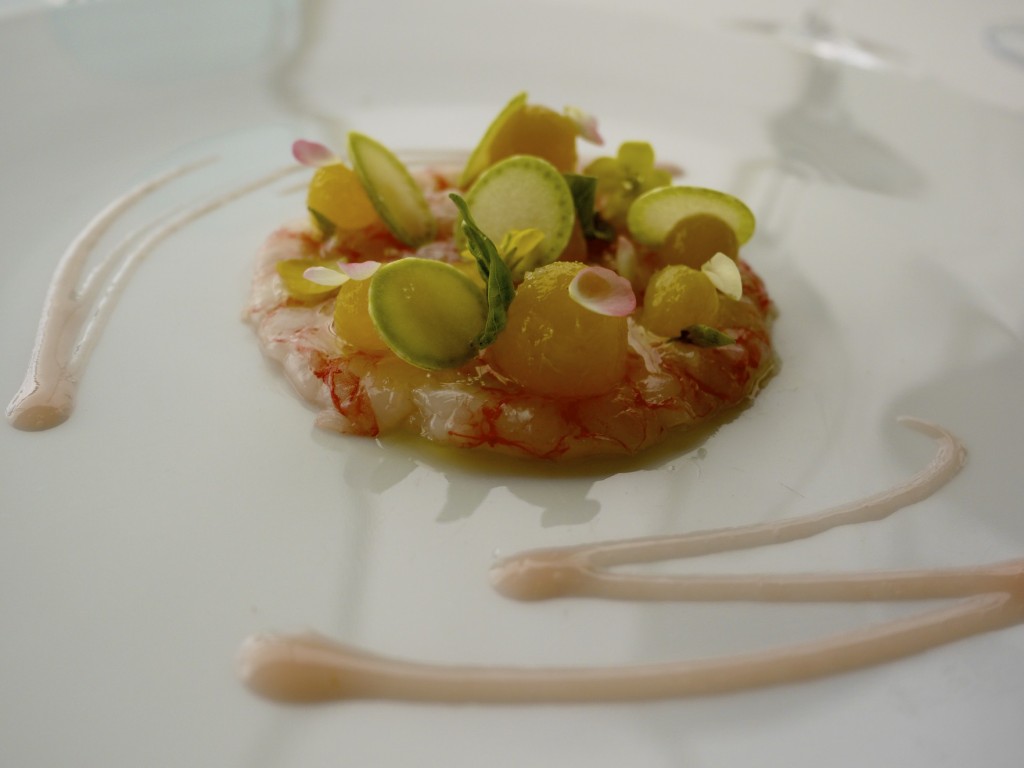 Our second course was a further impressive Carpaccio de Gamberoni de San Remo, et pêche et basilic. Freshly caught prawns from San Remo were carefully sliced and prepared as a carpaccio, served with little balls of peaches and peach jus as well as basil leaves. There were different layers of sweetness from the natural sweetness of the prawns to the fruity one of the peach and its jus. The finishing touches of the peppery basil completed this dish, making it one of the highlights from the meal. 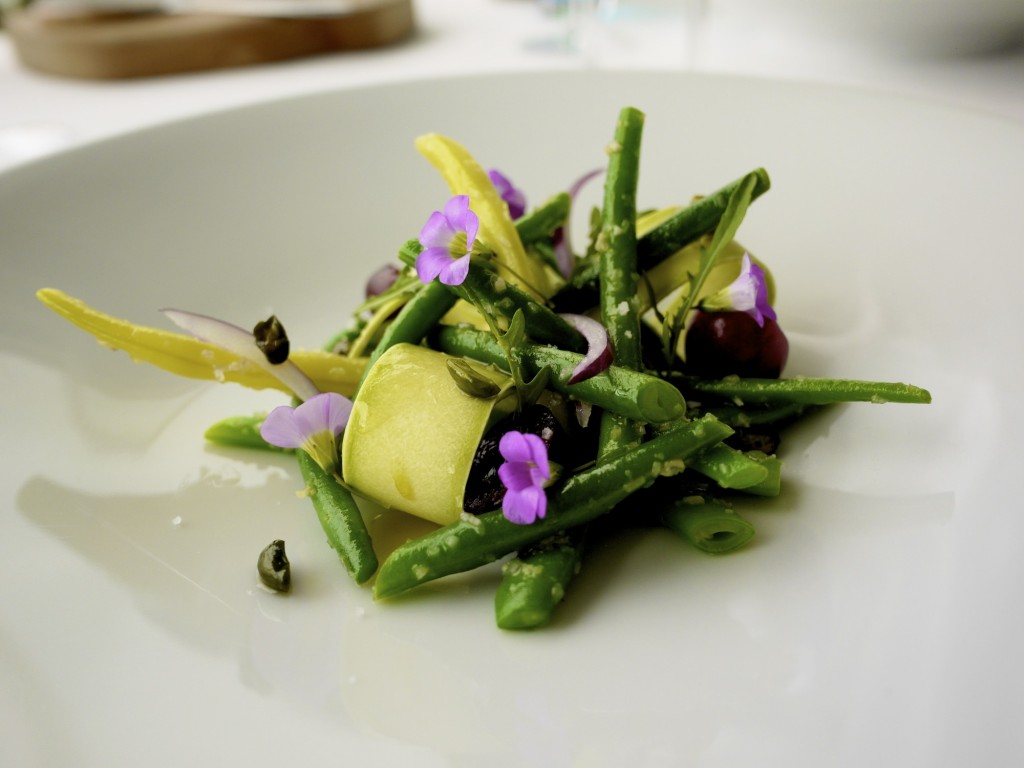 The Salades d’haricots, cerises et vinaigrette à la pistache was no ordinary salad. There were butter beans, green beans, shavings of zucchini, all cooked to perfection with a bite, served with pistachios, shallots, red onion, red and white cherries and ginger. The salad had then been dressed with herbs from Colagreco’s garden, lemon infused oil and white balsamic vinegar. I admire a chef who has the confidence to serve a salad dish and make it this good. Despite its unassuming appearance this was one of the most memorable dishes of the day. 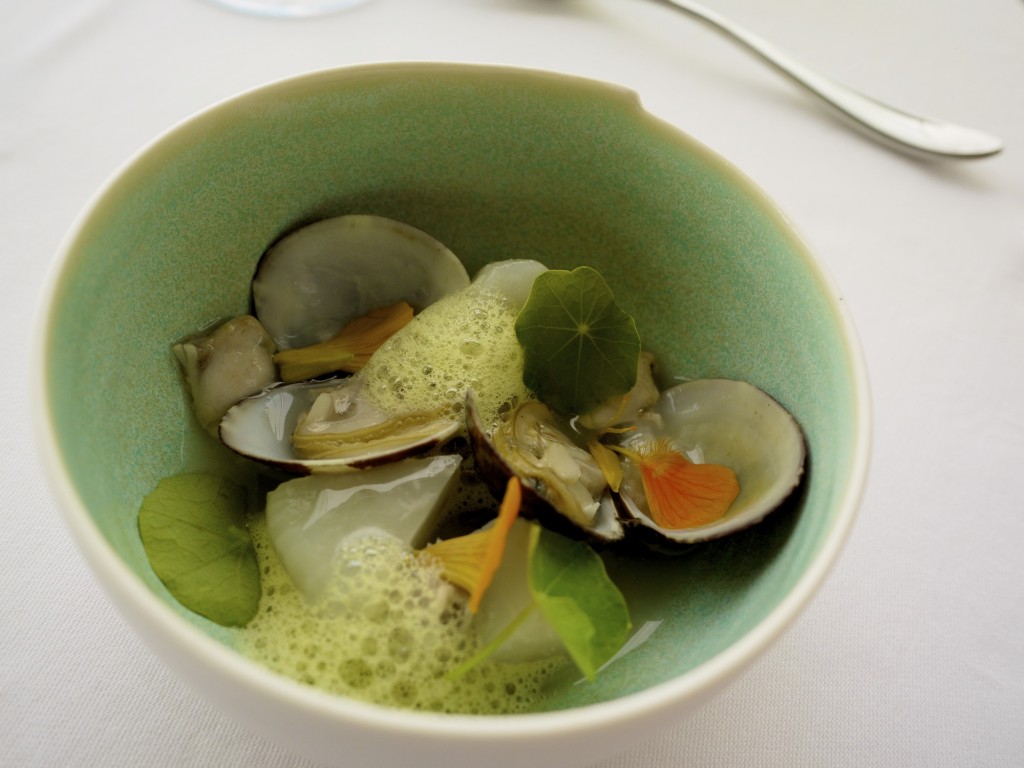 More flavours of the ocean with the Navet et palourdes au bouillon de coquillage (turnip and clams in a broth made from shells). The turnip had absorbed the broth made from shells providing a sweet and mineral component to the dish, drawing out the sweetness of the clams. The only thing that didn’t belong on this dish were the nasturtiums. 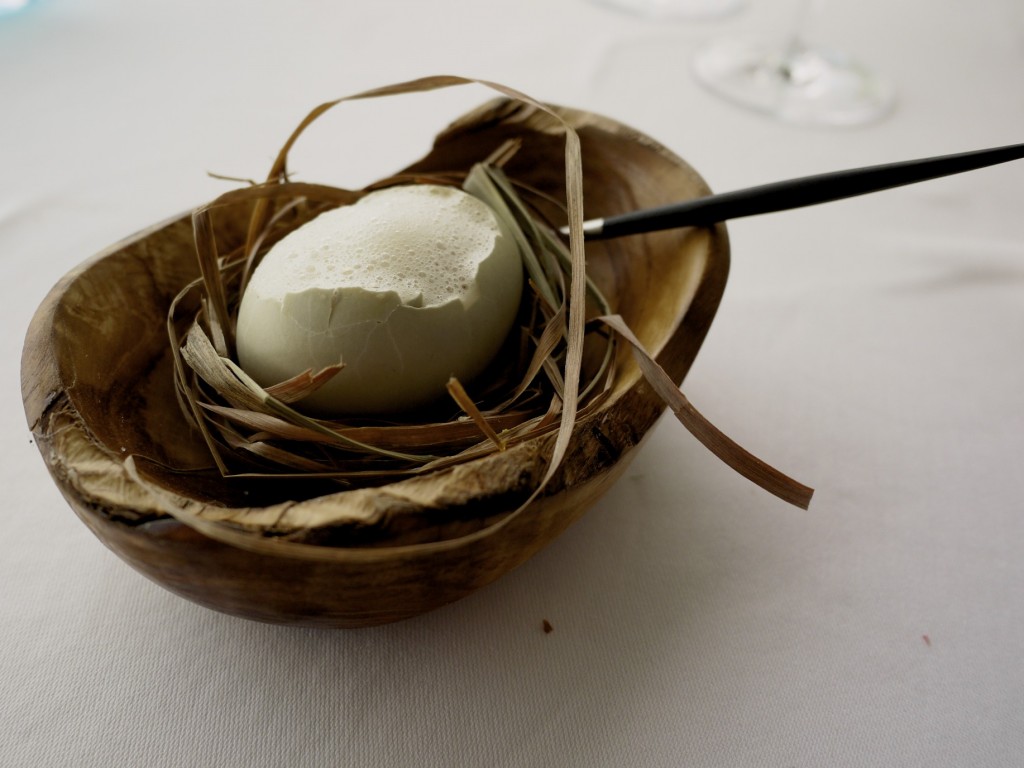 A beautifully presented Oeuf canne, crème de choux fleur et anguille fumée, effectively a duck shell that had been emptied and refilled with its yolk, cauliflower purée and smoked eel with a piece of hazelnut hiding inside. It was a very rich dish despite it’s simplistic look, making the small portion ideal. I was almost tempted to dunk a solider (how decadent would that be?) but sadly had already finished my bread. 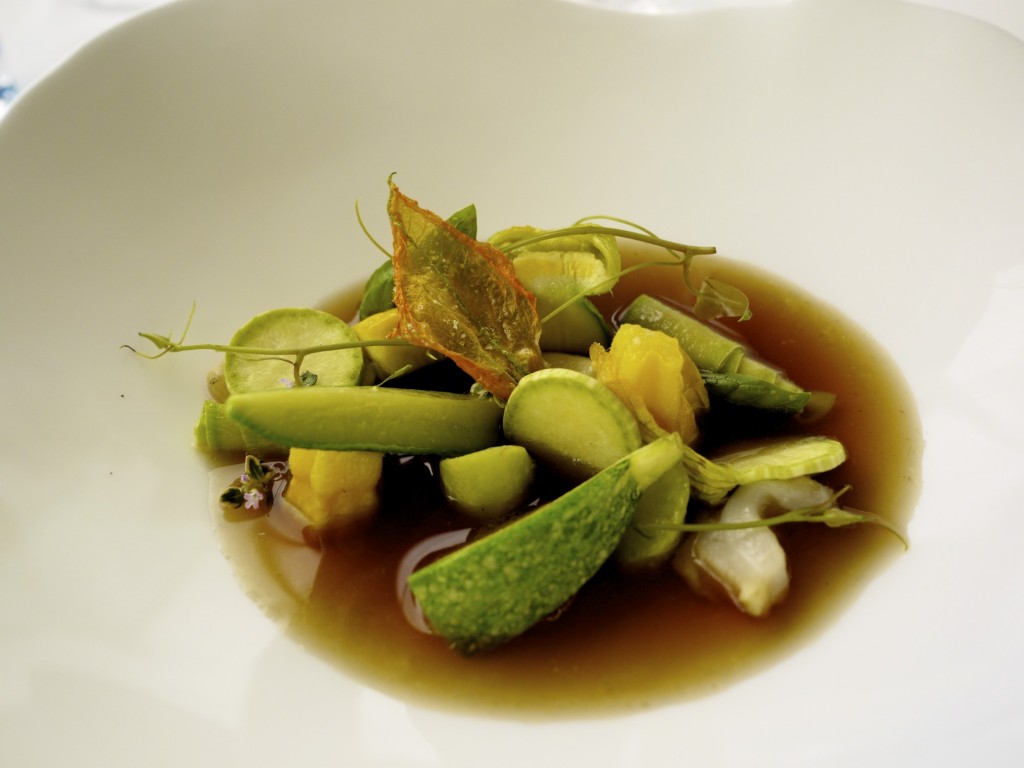 Colagreco was a magician with an ability to really transform simple vegetables into a stunning dish like the Ragout de courgettes du jardin, boulots et bouillon de légumes grillés. The star of this dish was the deep smokey flavour of the stock made from grilled vegetables which was also used to cook the courgettes and squash from his garden and the sea snails. What was unbelievable was that the best was yet to come… 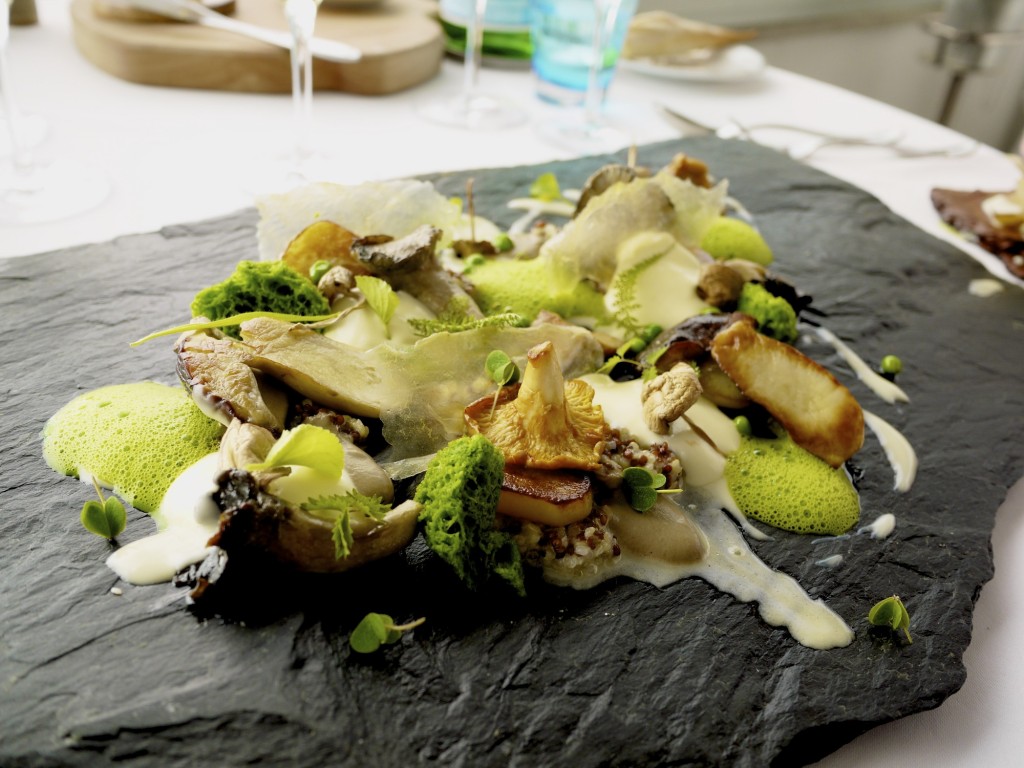 … which was the Risotto de quinoa, cepes, mousserons, charbonniers, girolles et crème de parmesan. A large slate weighing around 5kg was presented to us as a sharing course. On it were generous portions of ceps, oyster, mousseron, charbonnier and girolle mushrooms on a bed of quinoa risotto and a creamy sauce made from parmesan. The morsels of parsley brioche were perfect to mop up the cream. This was funghi heaven and despite the ridiculously large portion, we mopped it all up. I still dream about this dish… 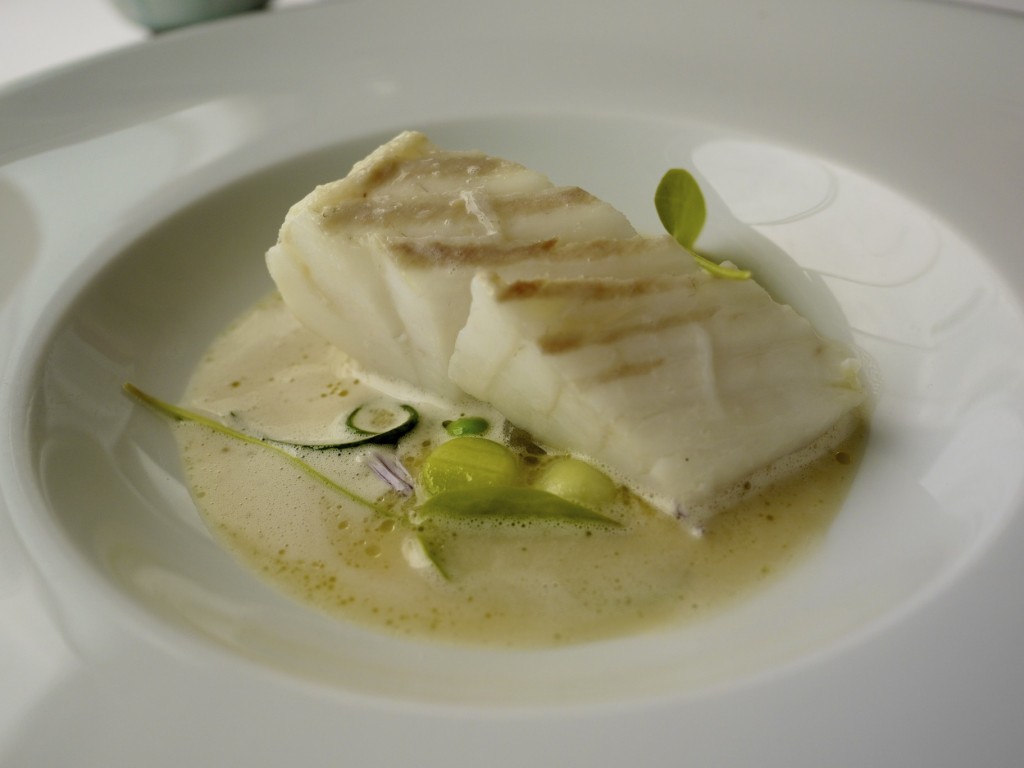 The catch of the day was Turbot au jus d’oignon (with an onion juice). The fillet of the turbot was utterly delightful with a firm texture. Although the surprising star of this dish was the buttery onion jus that left you wanting more. The fish was more a conduit to canvas the flavour of the sweet jus. 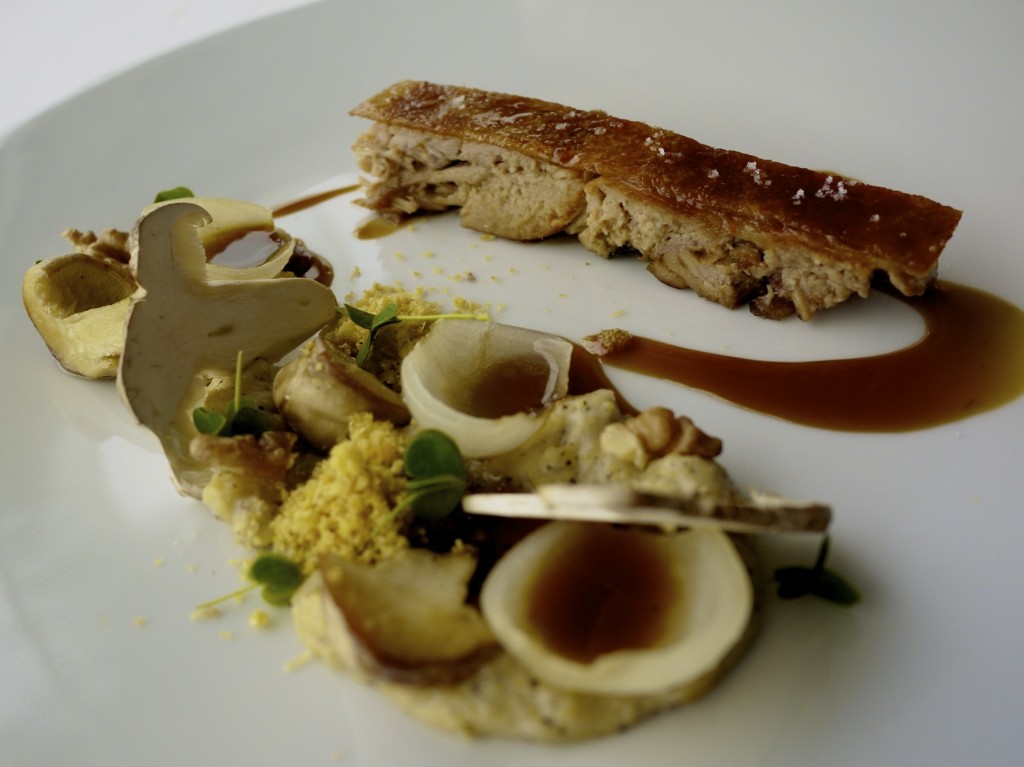 The only meat course of the day was the Cochon de lait, polenta aux noix et jus corsé; milk fed suckling pig served with a bed of polenta with nuts, onions and champignon mushroom. Perfect crackling and tender meat but we were stuffed. The risotto dish had KO’d us. A sound dish, although admittedly, I thought his vegetable and seafood dishes were much more interesting. 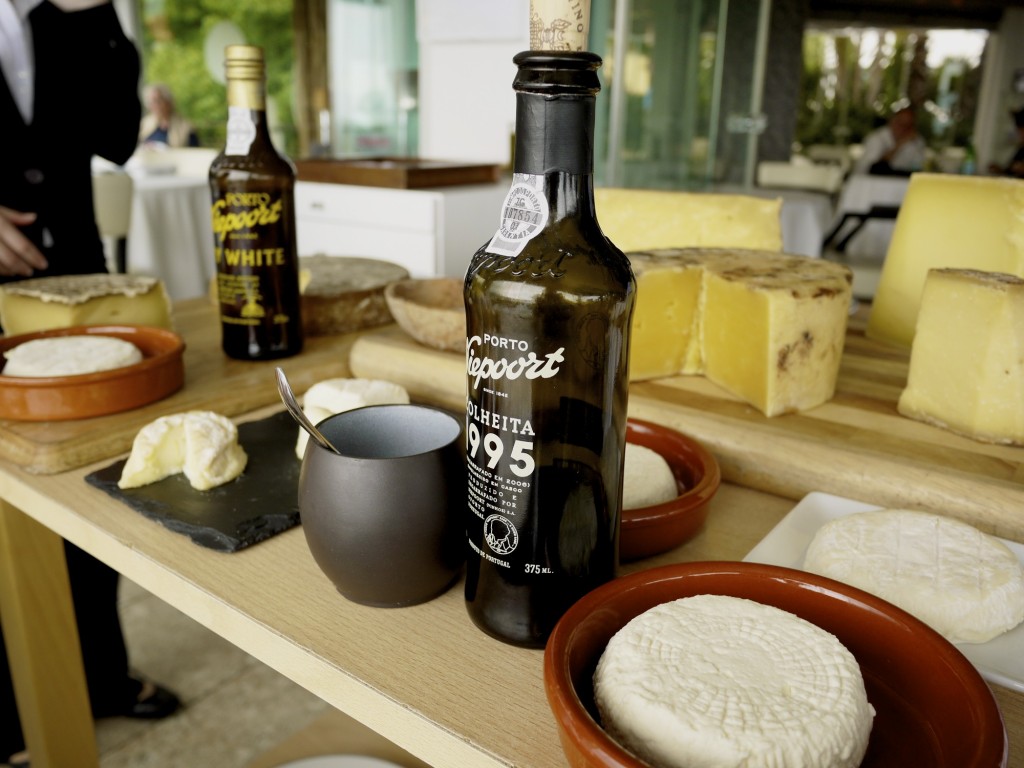 At my wife’s insistence, we decided to share a platter of cheese, including some comté and argui to go with a glass of port. 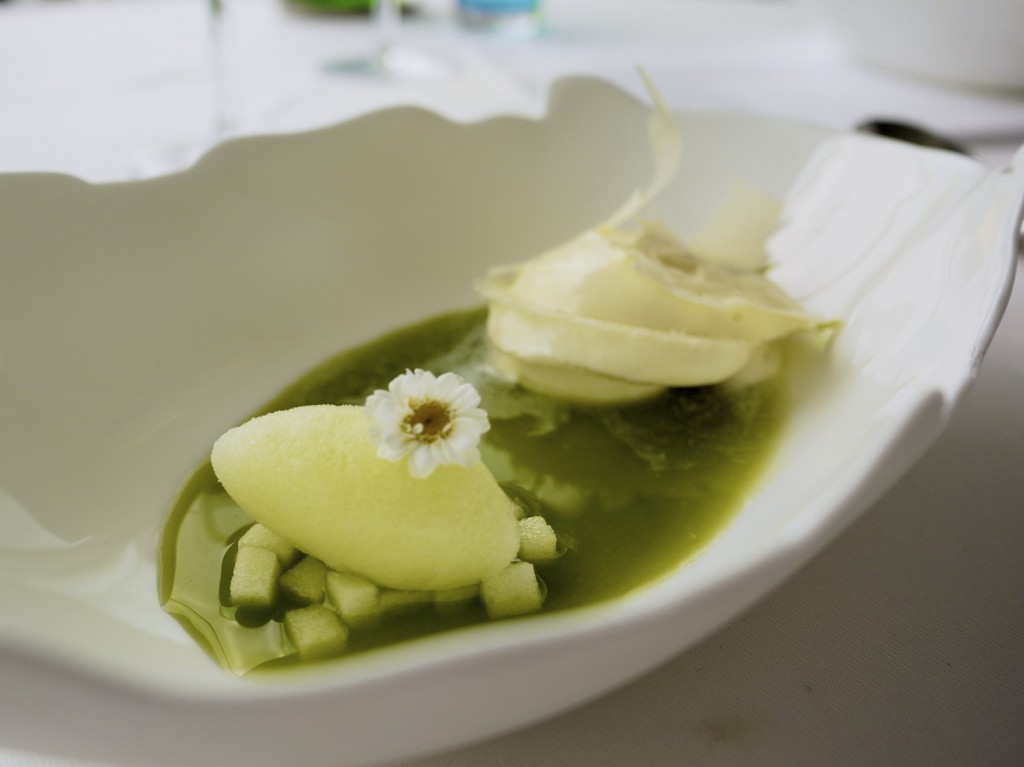 The Soupe de camomille, sorbet pomme verte et feuille de lait served as a palate cleanser, transitioning to the dessert segment. The aromatic and flowery camomile soup was very soothing on the palate and the touch of acidity from the green apple sorbet cleansed what was lingering from the cheese course. The milky cream downed the tartness of the green apple, making this a very balanced dish. 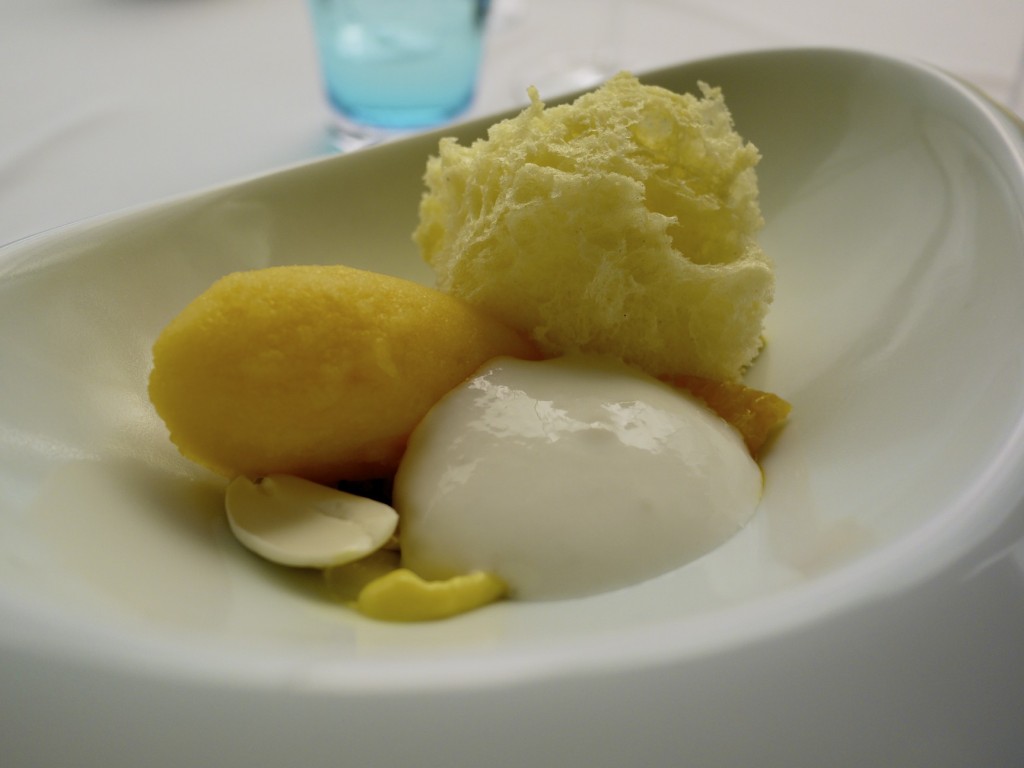 Dessert was by no mean inferior to the savoury dishes. The Crème de safran, espuma d’amandes, sorbet orange was exactly what I needed after the epic meal. The orange brioche was perfect in soaking up the sweet nutty almond foam, slightly bitter saffron cream and cold orange sorbet. But wait… Colagreco had one more dish! 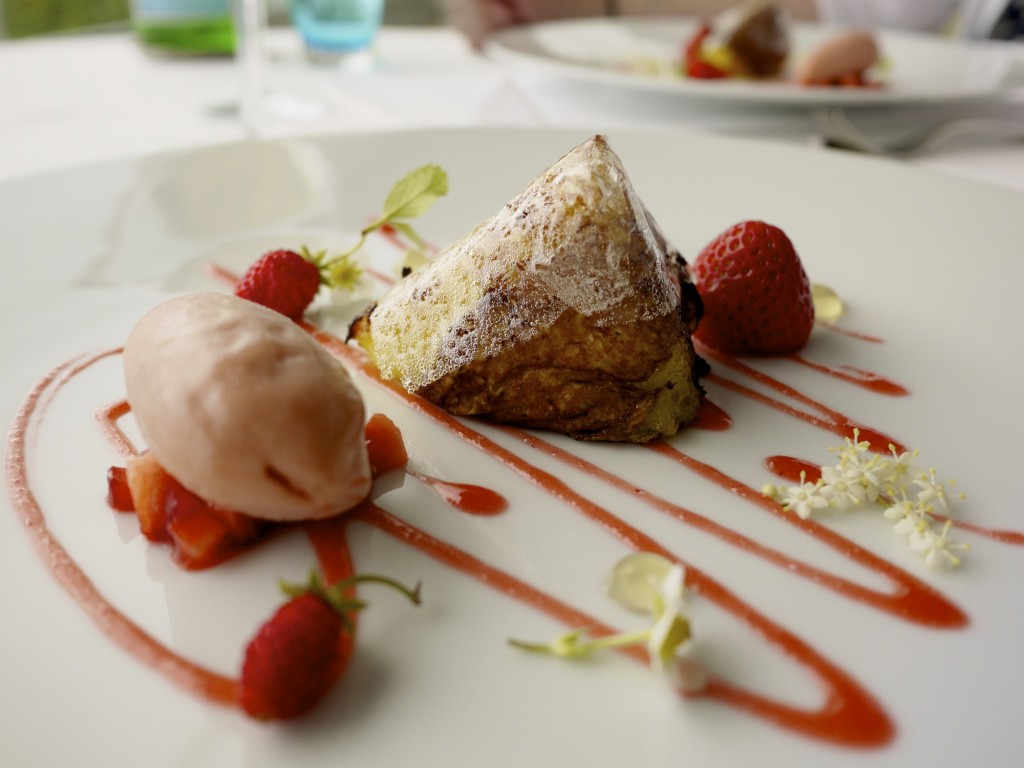 If we were not before, then we certainly became gluttons after this meal. Mind you, we didn’t mind either! Our grand finale was the Brioche maison caramelisée, purée de fraises et fleurs de sureau, a fluffy and light caramelised brioche with a wild strawberry purée and elderberry flowers. The natural sweetness of the strawberries was unbelievable! I could have had a bowl of them on their own. 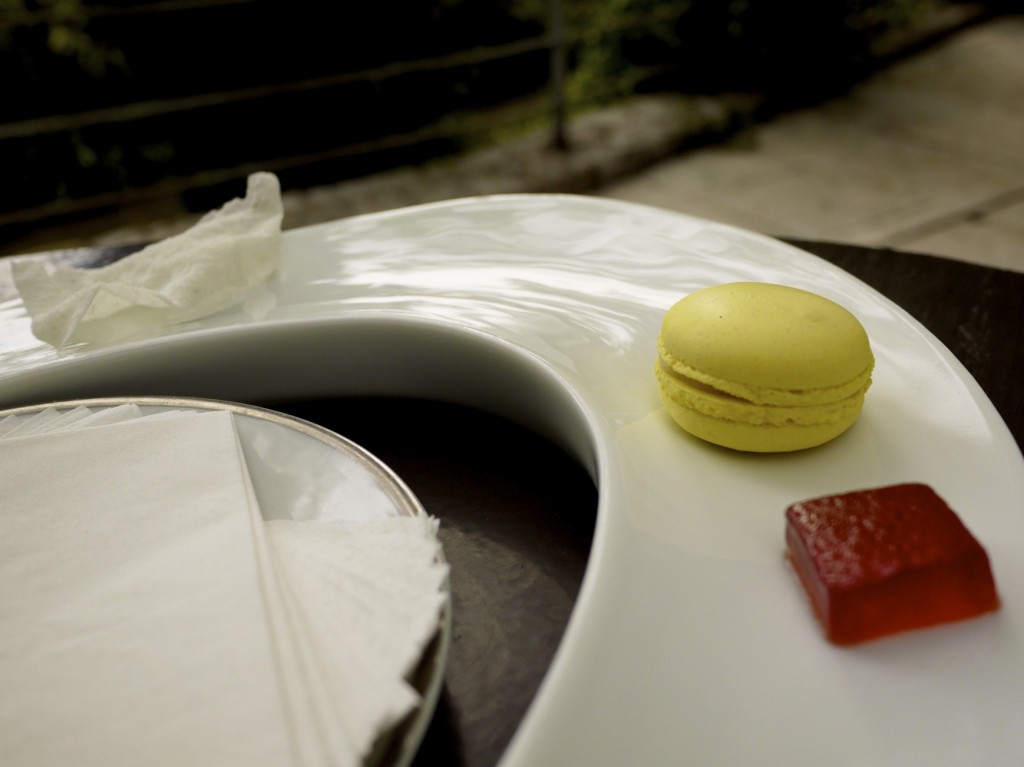 We decided to get some fresh air and make most of the intermittent sunny spells we had. I have a rule that where the opportunity arises I would light my favourite Hoyo de Monterrey Epicure No. 2 cigar after a memorable meal and this was one of them. But before puffing away on the deck over looking Mauro’s gardern and the Mediterranean, I savoured the Menton lemon macaron, citrus jelly and blown rice pudding, followed by a shot of Argentinian grappa to go with my cigar. Perfect recommendation I must say! 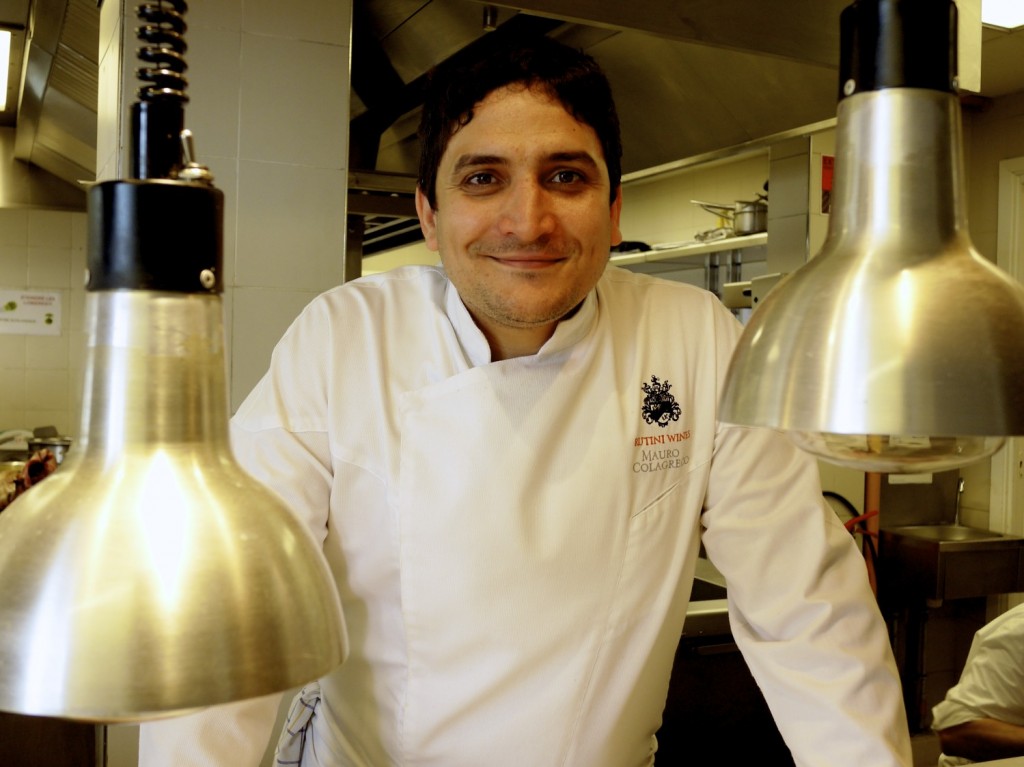 I couldn’t quite put my finger at describing Colagreco’s cuisine for it wasn’t constricted to a region or nation. If anything, Colagreco’s focus was really on drawing out big flavours from a handful of ingredients and produce, keeping the flavours harmonious. The dishes appeared deceptively simple, yet every component down to the wild flowers and herbs picked from his garden added a new dimension and impact to each dish. And then there was also the spectacular view, the friendly service and Colagreco’s passion that was evidently contagious to his team. We couldn’t help but smile throughout our five hour experience that felt like it ended all too soon. This undoubtedly is one of the best restaurants in the world right now.