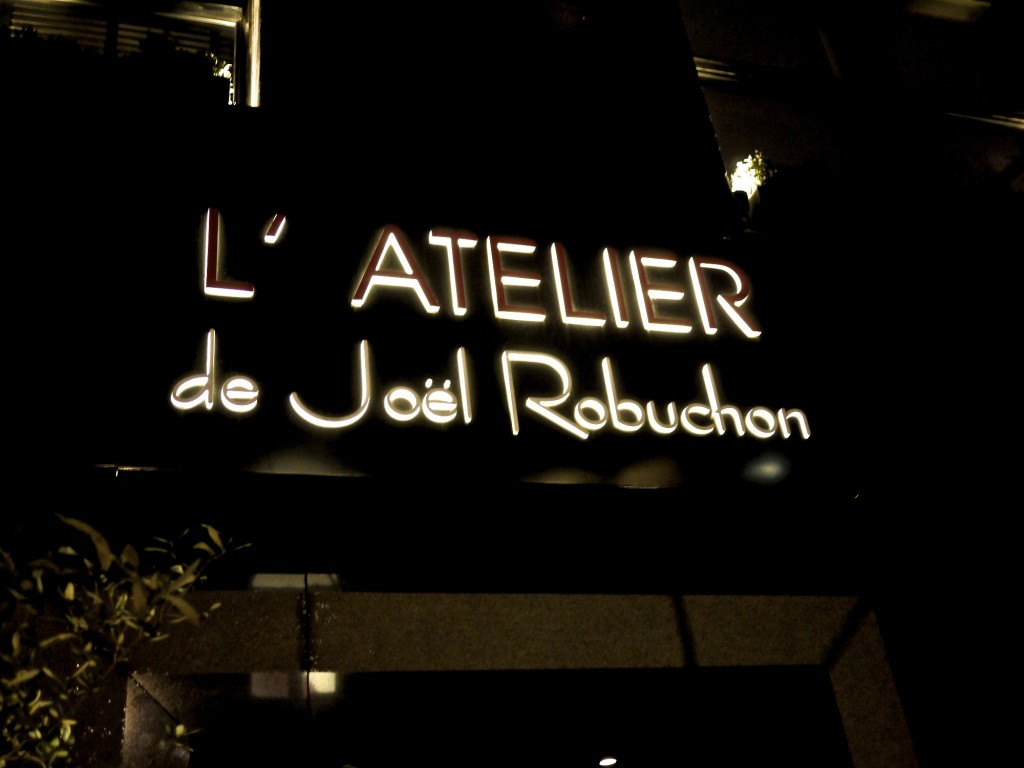 Part of the continuously expanding empire of Joel Robuchon, L’Atelier’s concept is based on Japanese counter dining, but serving classic French food instead. As I was celebrating my 30th Birthday, I decided to go with the full tasting menu and matching wine after a couple of lovely cocktails upstairs in the bar. 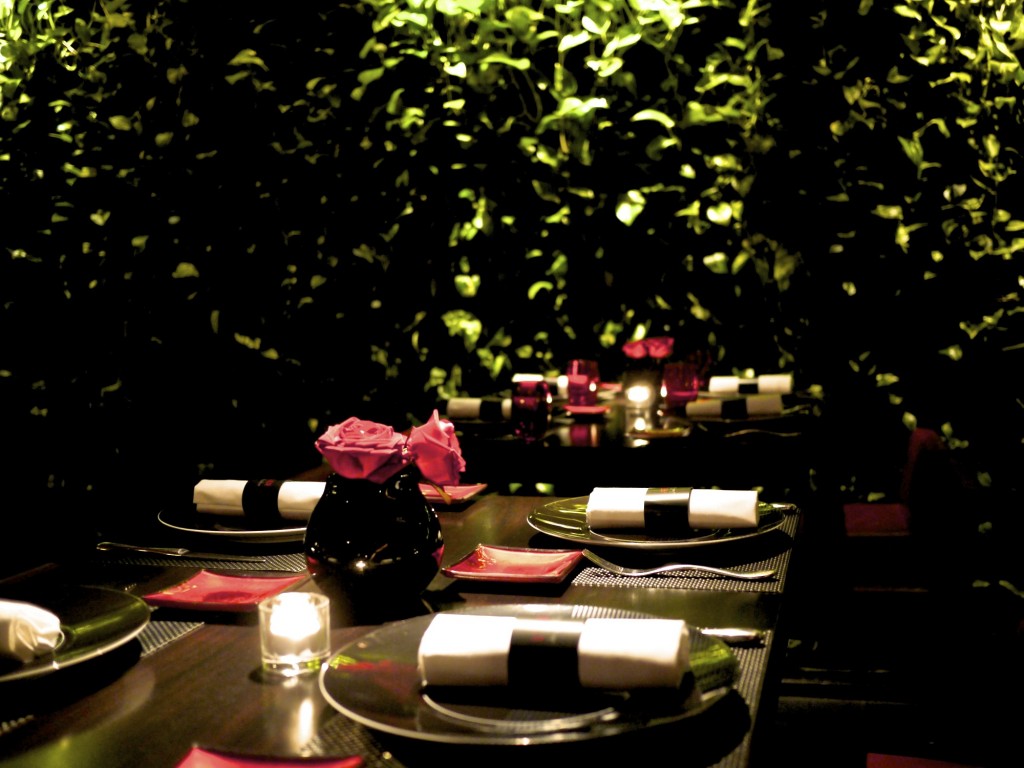 The decor is consistent with the other Robuchon branches consisting of an open kitchen in the middle of the room, dim lighting and red upholstery. The service was a bit slow to start with but picked up later on. The Head Sommelier was absent that evening and instead we had an apathetic sommelier pouring us our wine. 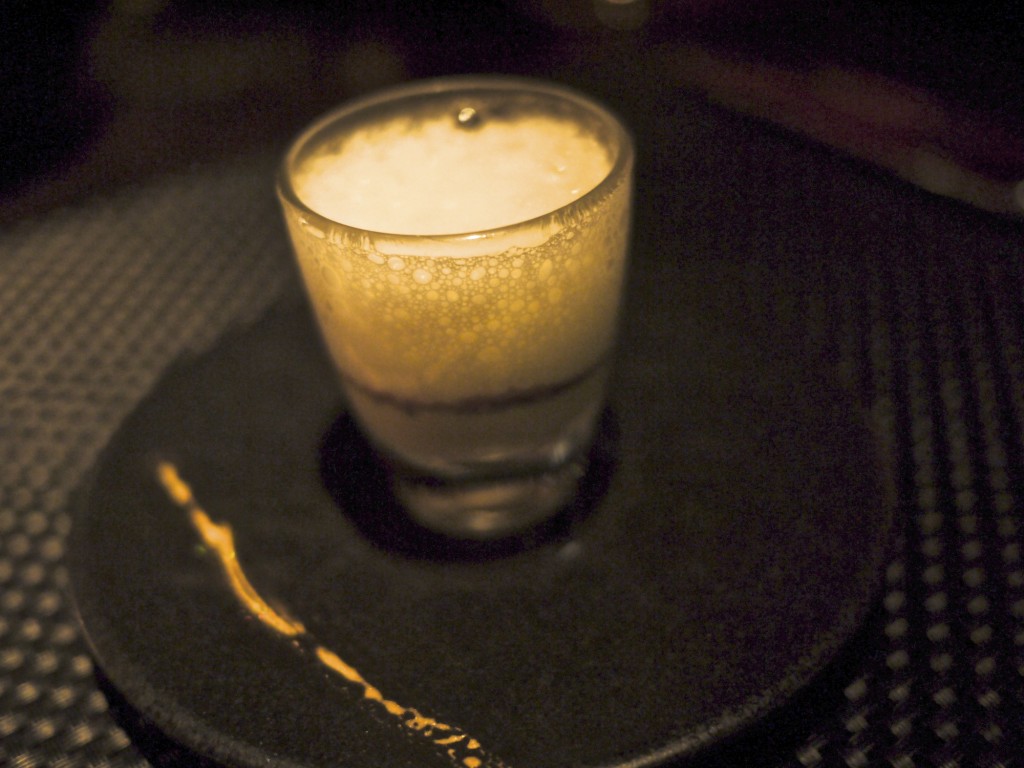 We started off with an amuse bouche of Parmesan cappucino with port, which was essentially foie gras royale, port wine reduction and parmesan foam. The foie was thick and rich whilst the parmesan added some seasoning and flavour to the dish. It certainly did whet my appetite. 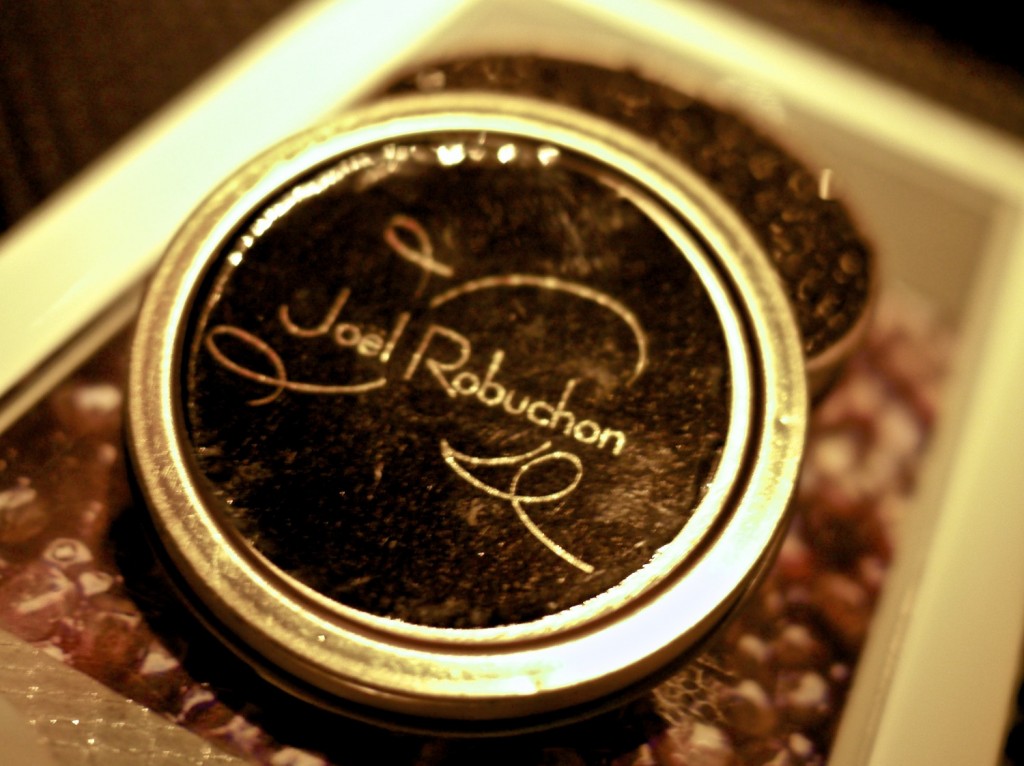 First up on the tasting menu was the Caviar served on a bed of crab meat and lobster jelly. The presentation was immaculate as always. 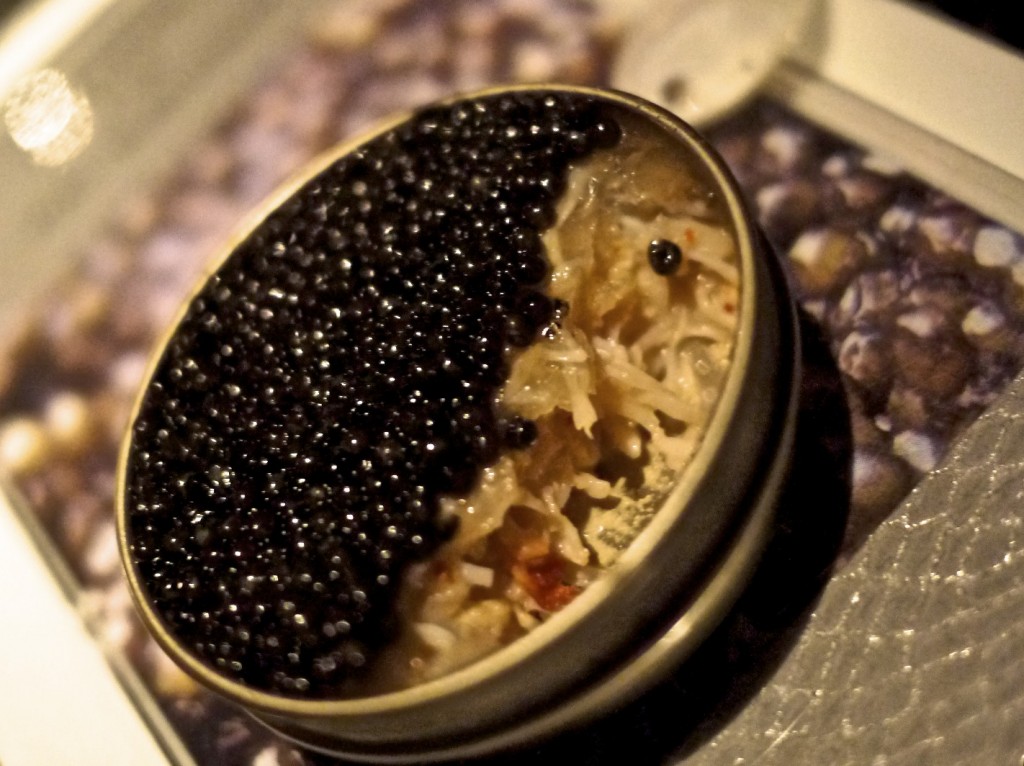 The flavour combination of the rich and fine Osetra caviar and crab from Normandy was further enhanced and brought out by the lobster jelly. What a great start to the meal with a taste of the ocean. A glass of 2011 “O Rosal” Bodegas Terras Gauda, Rias Baixas, Spain was poured to go with this course. It had a good balance of acidity and citrus flavour with fresh aromas of honeysuckle and citrus peel.

The Scottish lobster salad with artichokes “barigoule” and citrus vinaigrette was the only hiccough of the meal. Granted, the flavours were light, delicate and the produce fresh, but whilst I could overlook the lack of seasoning, the slightly chewy texture from the lobster was disappointing. It was definitely not on par with some of the other dishes we had that night. Matching wine was 2011 Rivaner Domaine Mathis Bastian, Moselle Luxembourgeoise, Luxembourg. 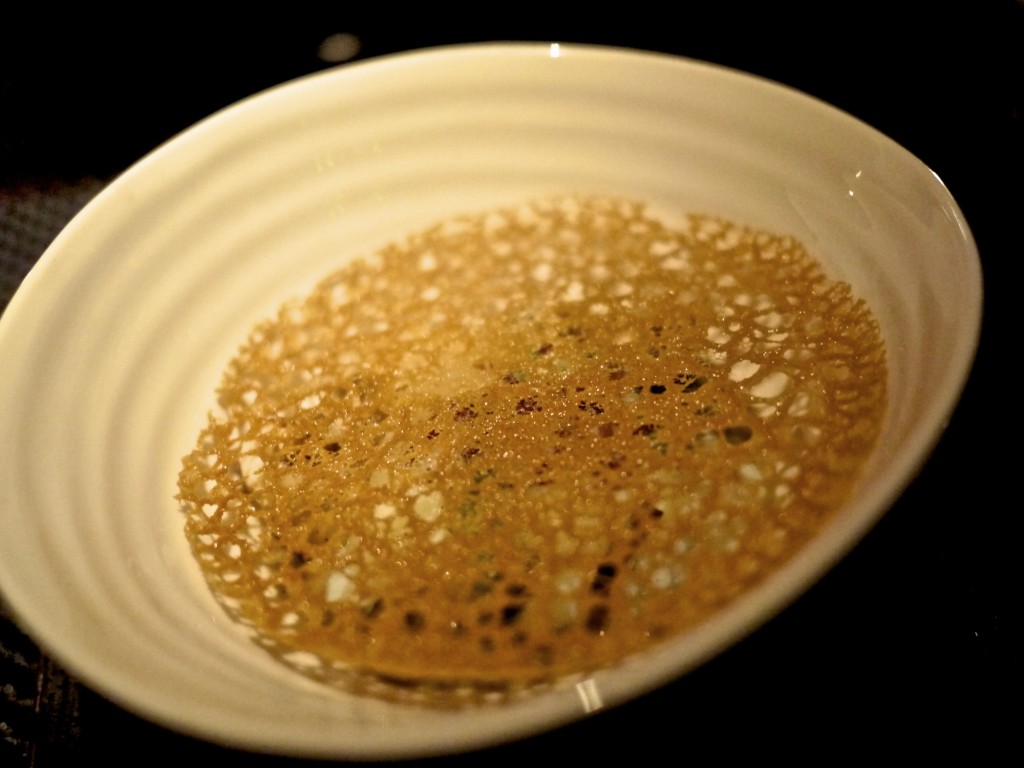 Unlike the last course, the Soft boiled egg with Japanese aubergine velouté flavoured with cumin was much more enjoyable, so much so that I forgot to take a photo of what was under the thin layer of crispy buckwheat galette! The smokey aubergine reminded me of baba ganoush and the overall texture and flavours of the dish was similar to chawanmushi, a steamed Japanese egg custard dish. Matching wine was from one of the newer wine estate of 2011 Ovilos Biblia Chora, Pangeon Greece. The seductive aromas of vanilla and peach, with the mineral palate, made it ideal for a creamy course like this. 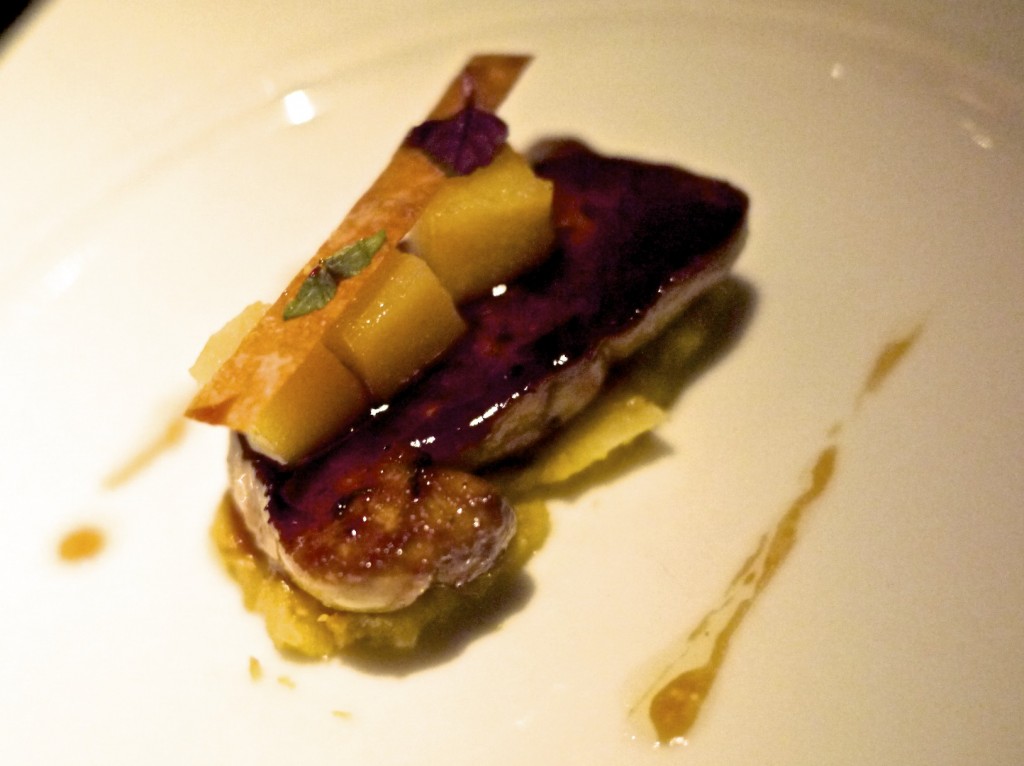 Seared Foie gras with quince and clementine marmalade. The foie was of a decent quality but I found the tartness from the marmalade was slightly overwhelming the balance of the dish, leaving a bitter aftertaste. Matching wine was 2011 Riesling Spatlese, Poulinshoff, Mosel, Germany, which, as expected, had a great balance of sweetness and fruitiness to go with the foie. 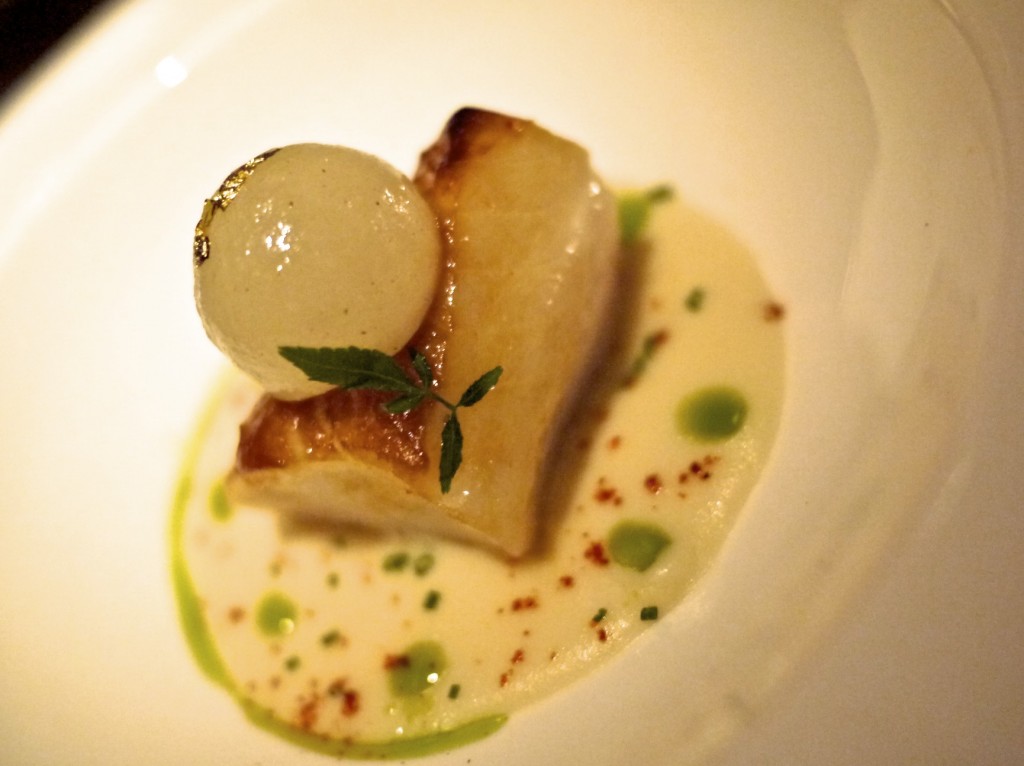 Another favourite dish of the evening was the Black cod with daikon and yuzu mousseline. I particularly enjoyed the dashi-soaked daikon and the sweet and delicate cod. The yuzu added the perfect acidic balance to complete the dish. The dry and soft 2011 Karmis Contini, Sardegna, Italy was a good match for this dish. 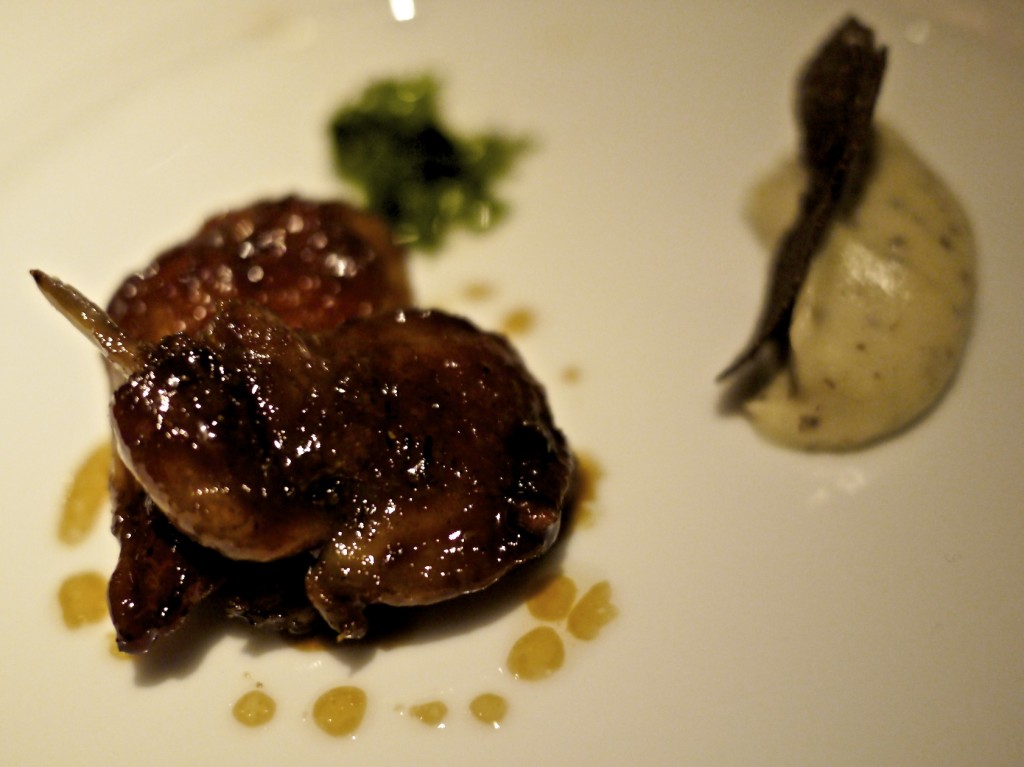 For the meat course I opted for the Free range quail stuffed with foie gras and truffled mashed potatoes, which consisted of the breast and leg of quail and a lovely black truffled mash potatoes. This course showed some great cooking as the foie gras had not overwhelmed the perfectly cooked quail. The matching wine of 2010 Saint Laurent Weingut Heinrich, Burgenland, Austria, was my favourite of the evening. The blackberry and chocolate aroma with the soft creamy tannins was delicious. 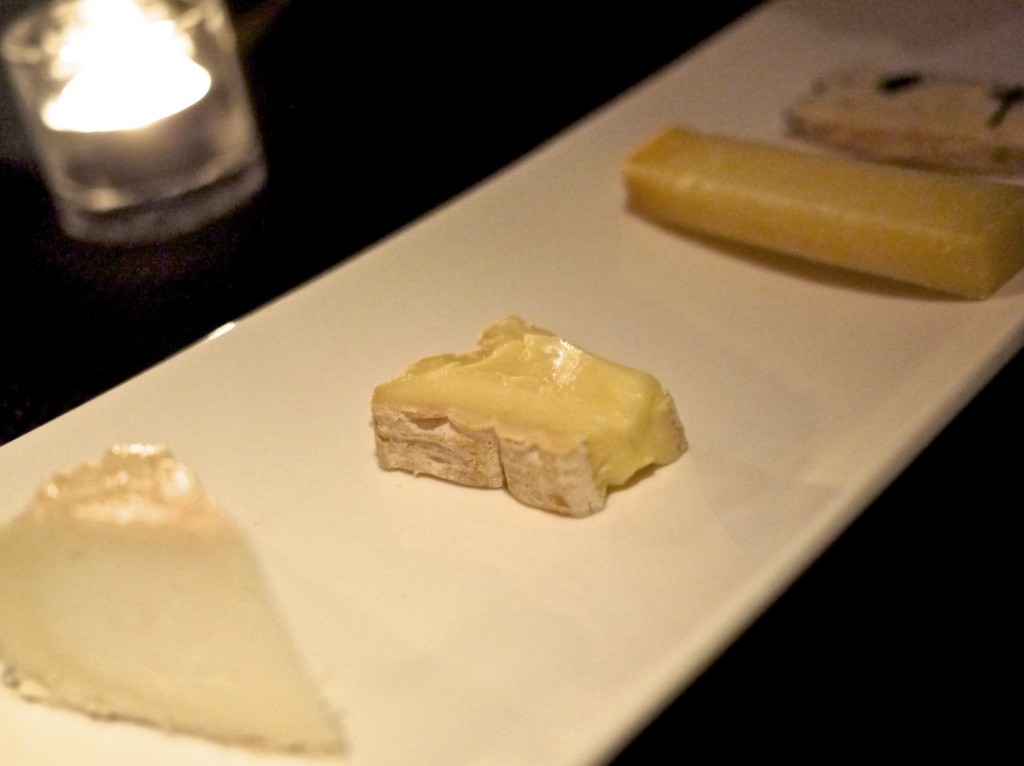 Cheese course including my favourite roquefort. 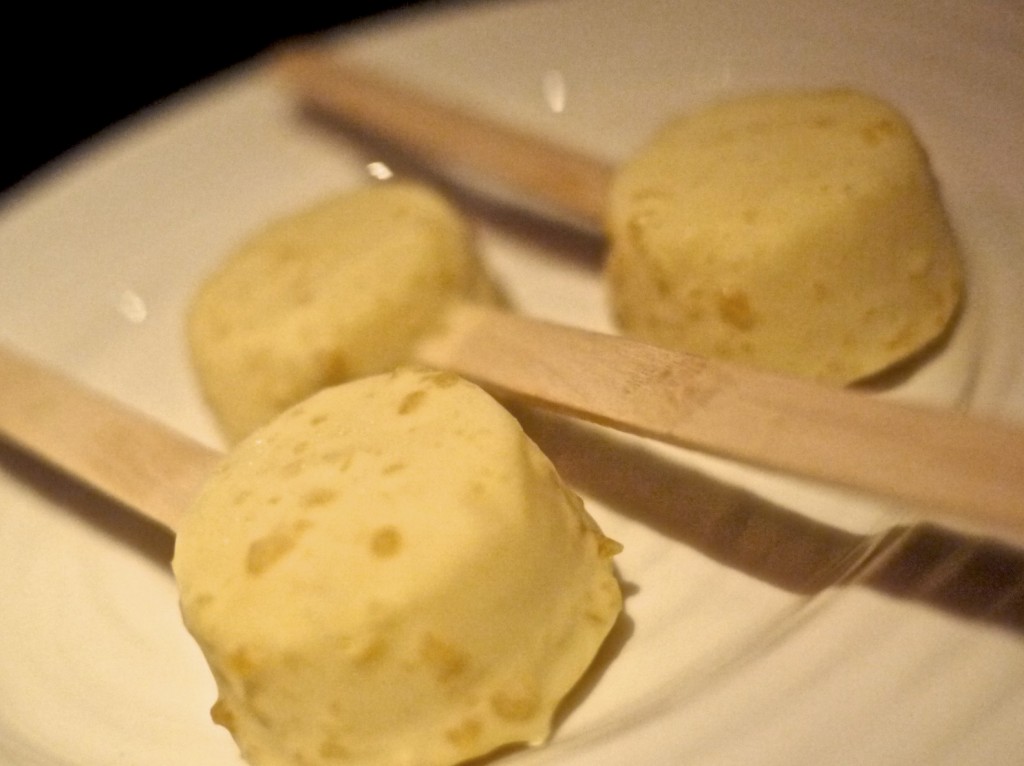 First part of Francois’s duo of desserts, which was a mandarin lollipop with white chocolate coating and popping candy. A nice palate cleanser with some vanilla seeds mixed into the mandarin sorbet centre. 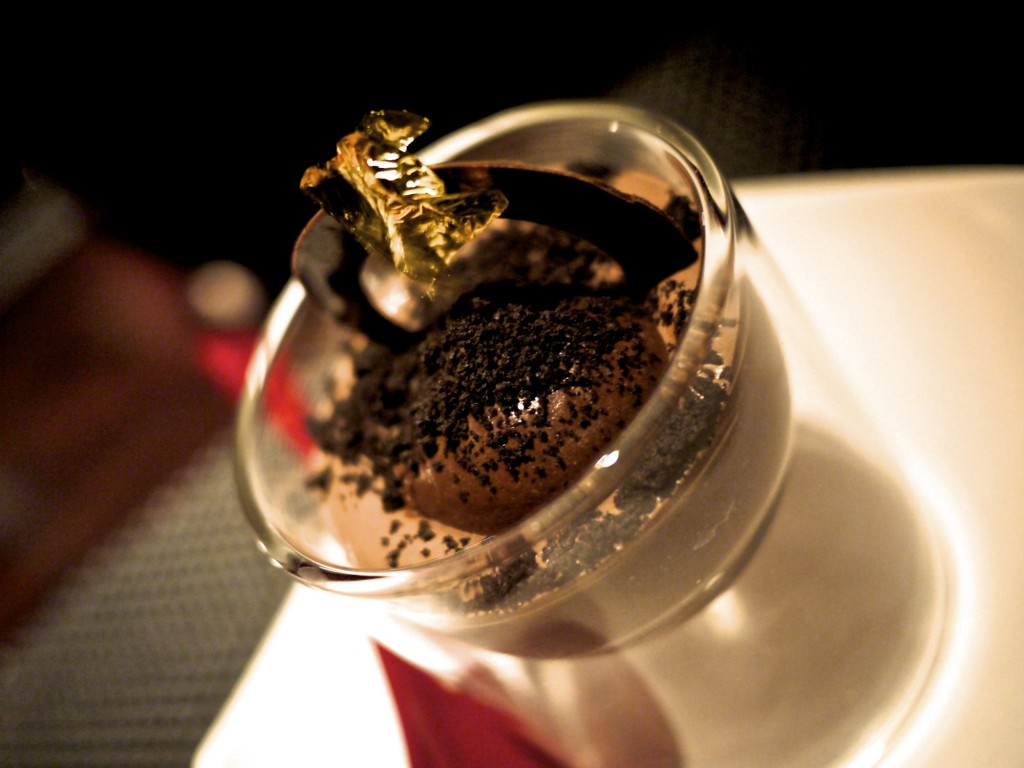 For the second dessert dish we had a much richer chocolate mousse with oreo crumble and a fine chocolate disc. To conclude the evening, I was poured a glass of 2010 Maury Mas Amiel, Languedoc-Roussillon, France to which I remarked it had similarities to a Grenache. The sommelier’s looks of disgust did not go unnoticed and he was quick to put me down as according to him I could not have been more wrong. There’s no need to put down a customer if they’ve made a genuine mistake, but ironically the wine was predominantly of the grenache grape variety – shame I only found out when I got home! 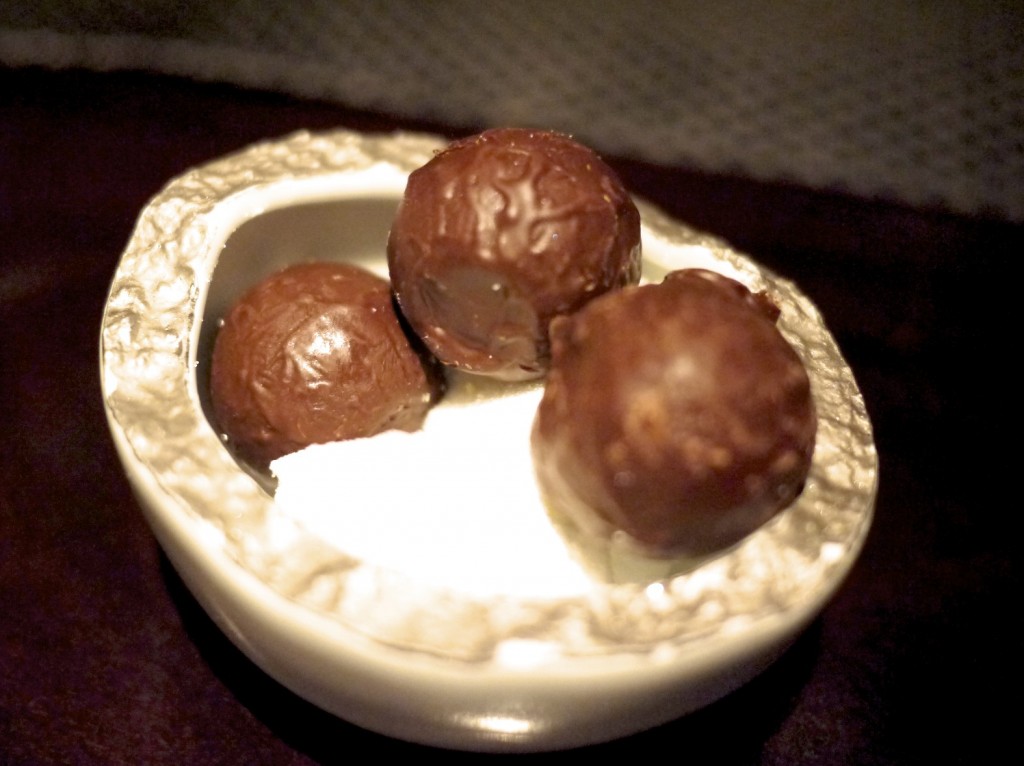 Some chocolate mignardises to finish the meal. 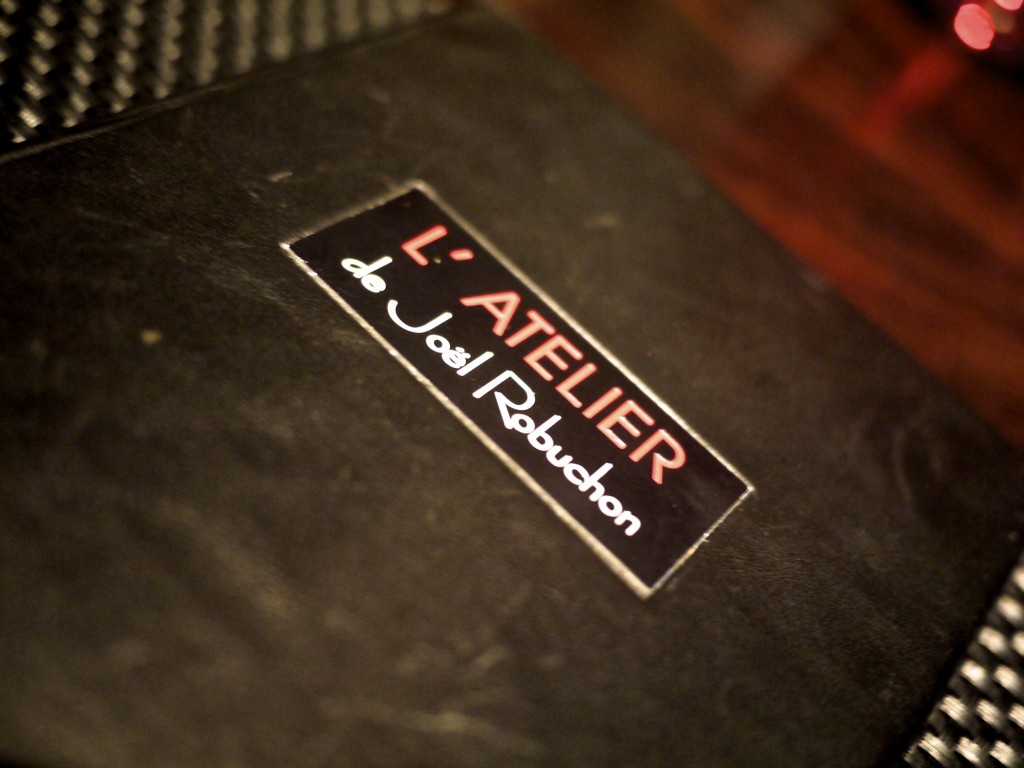 The food on the whole was good and I enjoyed the flavour combinations. The matching wines were generally good and on the whole the service was alright, but perhaps too casual and inconsistent for what I would expect from a two michelin star establishment. For example, one of the staff escorted us on the lift to the bar area, but no one came to see us off at the end of the meal. Whilst I could overlook these flaws, the sommelier left me a bad flavour and a dent to otherwise an enjoyable evening. I would consider a return to try some of the other dishes, but I must admit I won’t be returning there in a hurry.