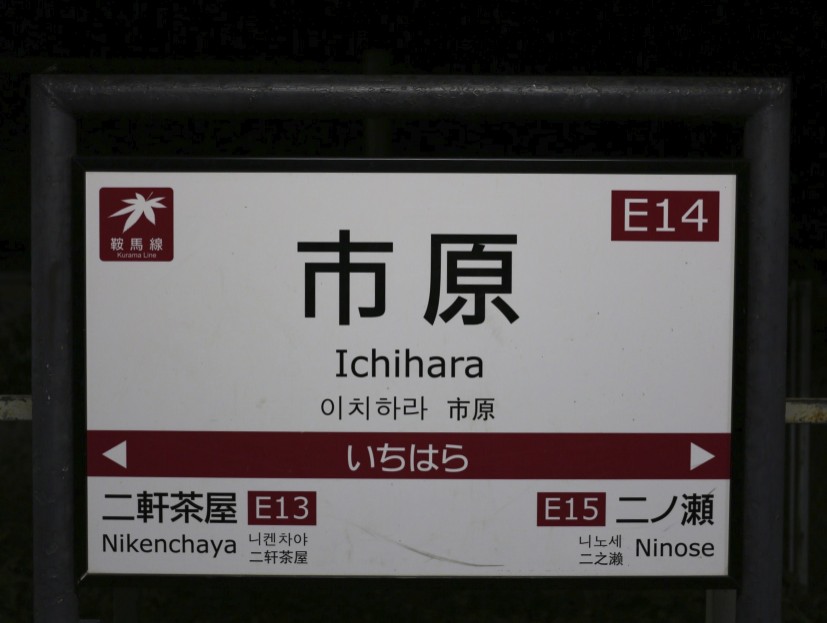 Of all the restaurants I have ever visited in Japan, and the world for this matter, I never expected a restaurant specialising in chicken to have left the most profound dining memory to date. It was a stroke of genius and luck when my friend Waswate suggested adding a one Michelin starred restaurant, Seto, on to our itinerary in Kyoto. As we had already a few three and two starred meals booked, I thought it would be good to get some diversity in the cuisine. In other words, why not? Getting the booking wasn’t too hard as all I needed to do was call the restaurant, but getting to the restaurant was a different challenge. To get to Ichihara station one needed to get to the privately operated Eizan railway line which starts from Demachiyanagi, the last northeastern stop on the main lines of Kyoto’s metropolitan area. It was a good idea to have given ourselves ample time to get there. 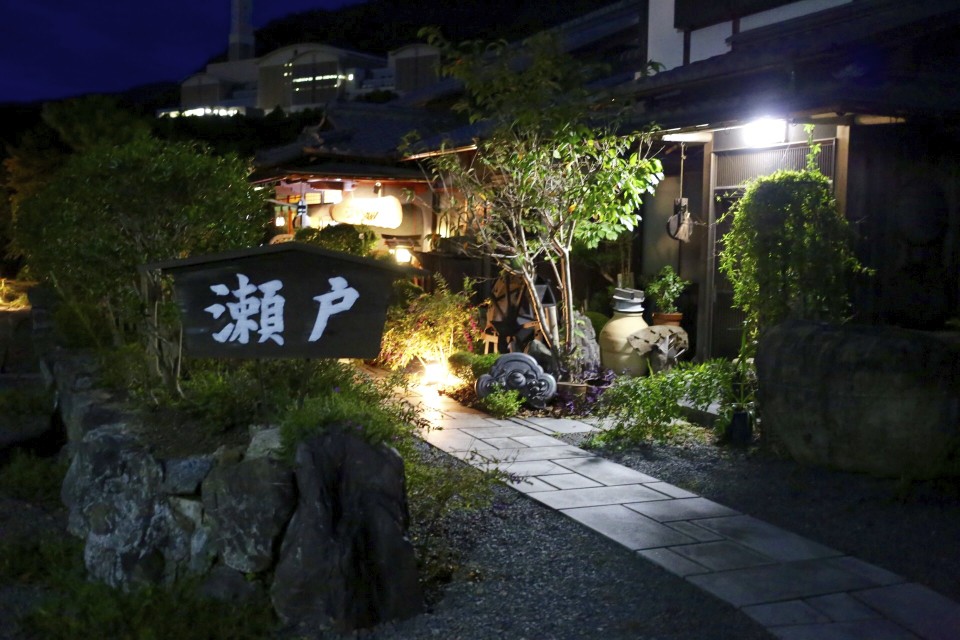 The walk from the station to the restaurant was a brief ten minutes without complication. As we approached the restaurant we could see someone waiting by the entrance. That person was in fact the proprietress, Seto-san, who always receives her guests at the front gate. I had booked the table in my native Japanese but as we approached I could see she was looking a little anxious. As I began conversing in Japanese she regained her composure, a sigh of relief could be heard as she explained that the only English speaking person had already been dismissed for the day and we were the only diners for that evening. The only ones? Hmmmm… 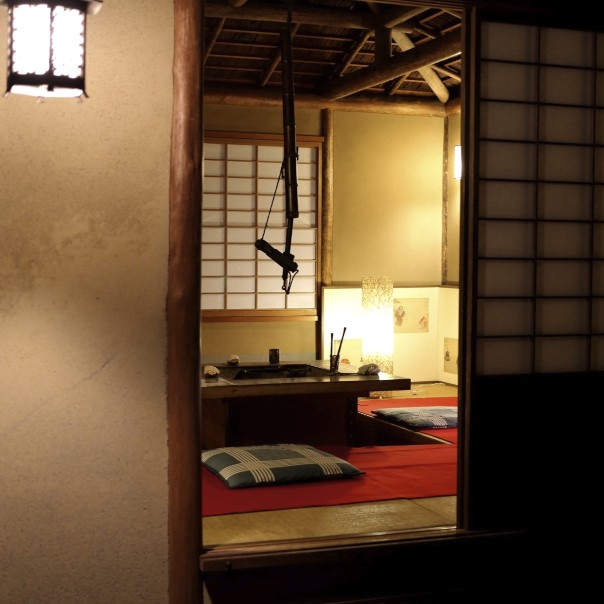 As Seto-san guided us through her cozy farmhouse things started making more sense. She in fact had only three private dining rooms available, two as part of the main building and one which was a detached stand alone dining space. To our delight she had prepared the detached room for our meal. As we made ourselves comfortable she continued giving us some background and history behind the restaurant. She had moved here over fifty years ago to be with her now deceased husband and to manage a small plot of land to rear chicken and grow vegetables. They had decided over thirty years ago to start serving the fresh produce and chicken themselves instead of selling them on. Since her husband past away she had managed the restaurant alone with the help of a small team of three. 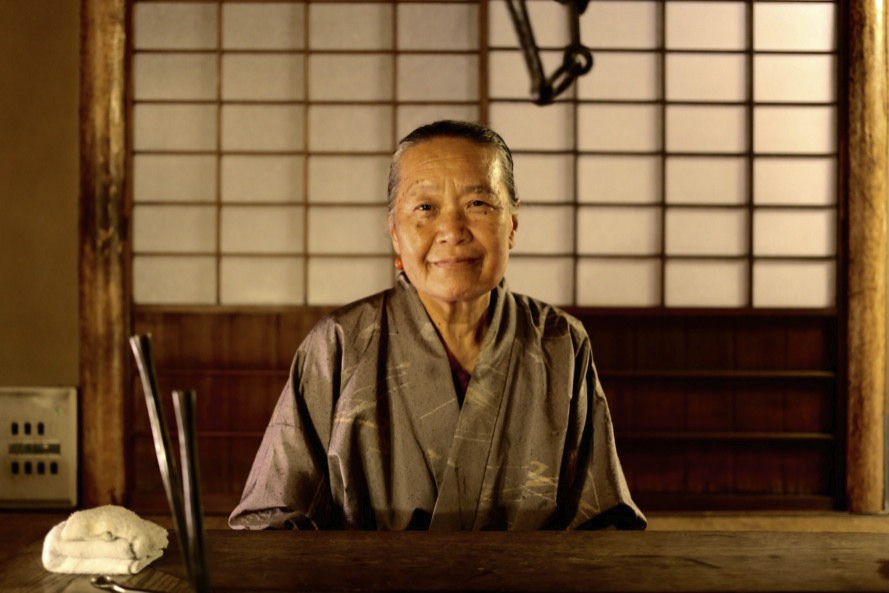 Seto-san explained that she had entertained many celebrities and politicians throughout the years but this was the first time she felt so nervous, though not in a bad way she added. She just never imagined conversing in fluent Japanese with a foreign looking (albeit half-Japanese) person. I was glad to have been able to converse in Japanese for I think my memory and experience here would not have been the same had we been served by someone else (Hint: if you do ever get the opportunity to come up, do come with a Japanese speaking person if possible). 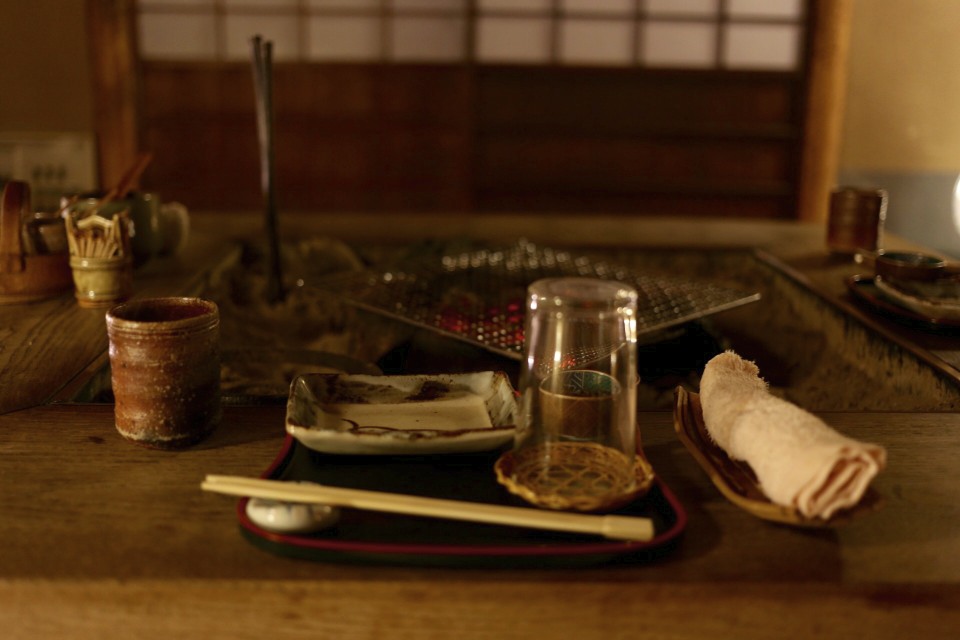 Seto-san didn’t waste a single minute to attend to everything despite being immersed in a full conversation. She took our order for a nice cold beer and made the final preparation for the dinner. As we waited for her to come back with our beers, we took a moment to soak in everything. The glowing coal in the Irori (囲炉裏) or fireplace, the orchestrated sound of the insects gently humming away outside and the lovely old smell of the tatami and surrounding. I couldn’t believe where we were. It was so peaceful and soul cleansing. 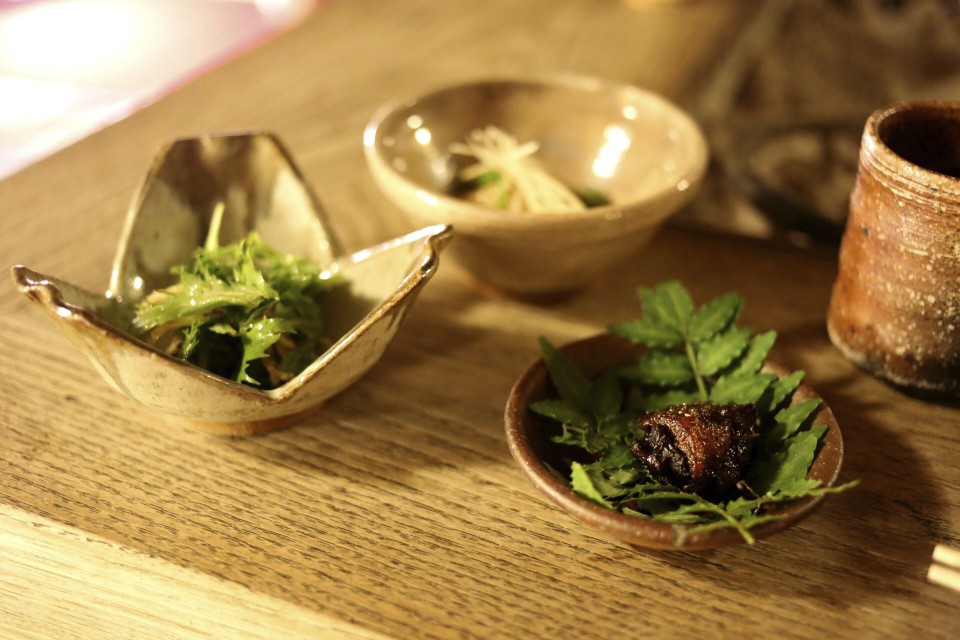 The appetisers consisted of three dishes which were pickled perilla leaves or shiso no mi (紫蘇の葉) with chicken tail, a salad made entirely from home grown produce with tofu, and some aubergine that had been soft boiled in bonito stock (nasu no nibitashi – 茄子の煮浸し). 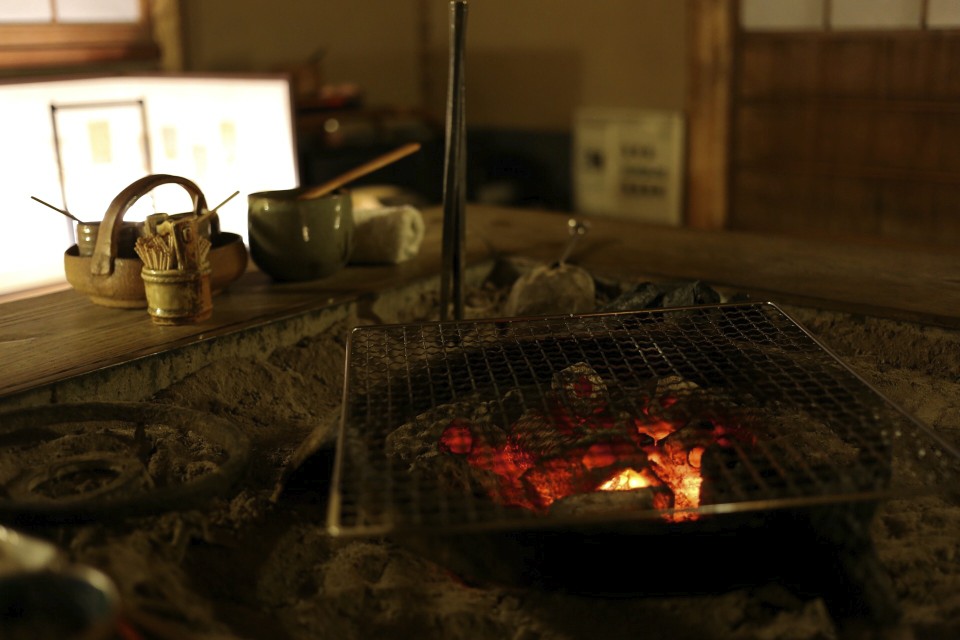 I couldn’t help commenting on how flavoursome the produce was. Seto-san explained that they did not need a fridge at Seto because everything they served was always picked and slaughtered that day. She explained that the reason why people had to book in advance and why only a maximum of two bookings per sitting was because they were dependent on the number of chicken they have on their farm. Talk about vertical supply chain management. This level of dedication around sourcing was new territory for me. 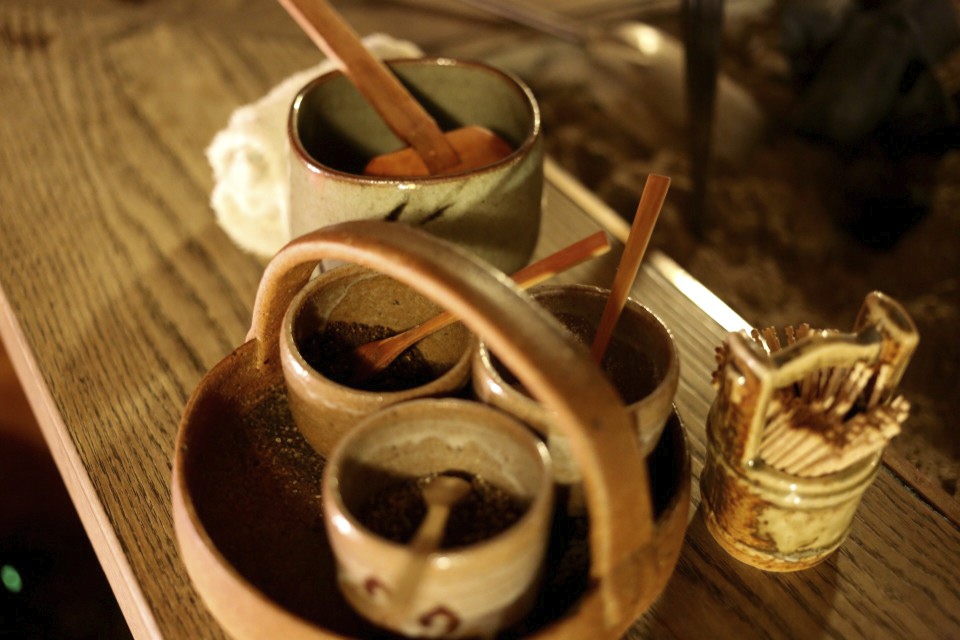 The choice of spice recommended to go with the first preparation of chicken were rock salt, black pepper and kuro sansho (黒山椒), which is also known as black / ripe sichuan pepper. 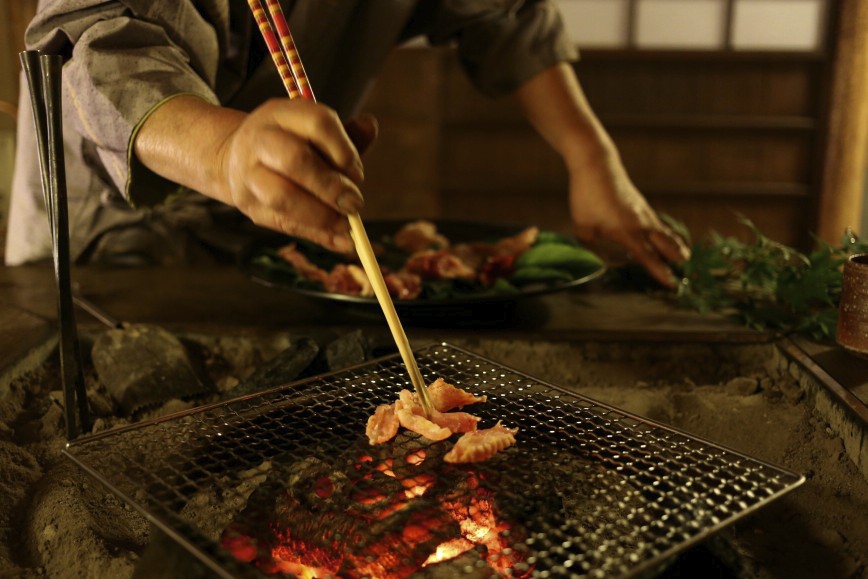 The first preparation of chicken involved grilling each part over coal as a sumibiyaki (炭火焼き). Seto-san began by serving unbelievably succulent grilled chicken feet followed by the breast, tenderloin, neck, kidney, liver, thigh, wing and back in this order. The kidney was crunchy and the tenderloin very juicy but the liver was in its own class. 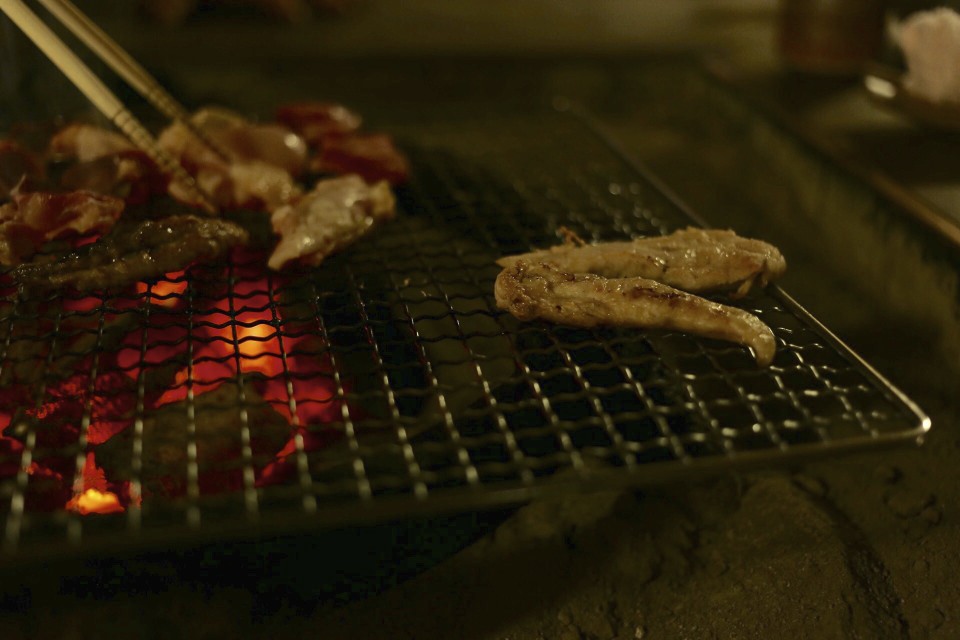 Given the chicken had not been slaughtered till an hour before our meal, the liver was fresh and not too dissimilar to some of the best foie gras I’ve ever tasted in France; rich and creamy. This was unbelievable. Seto-san explained that they only had akadori (赤鶏) or red feathered chickens on their farm which are renown for their flavour. 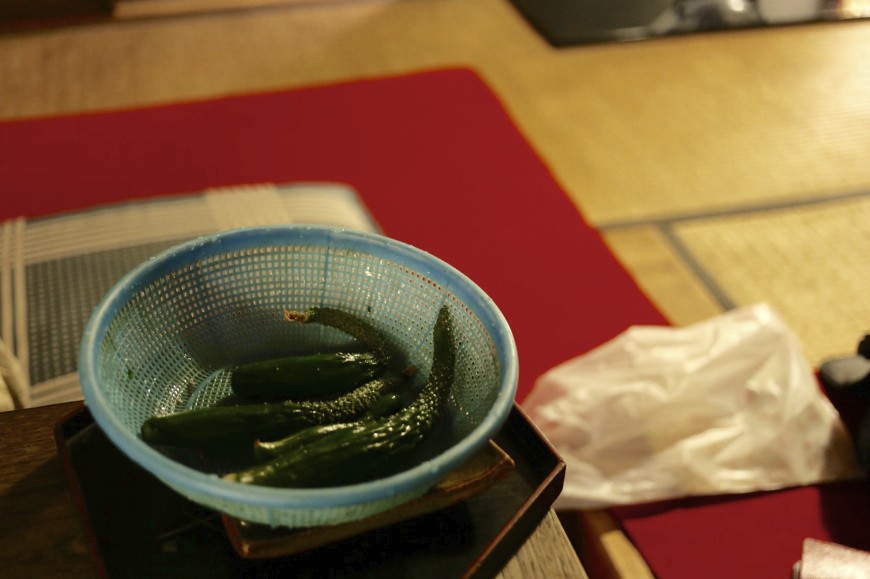 As we finished up our first half of the chicken, I was still ranting on about the freshness of the produce. Seto-san’s eyes lit up and she dashed off saying she would be back immediately. She  returned around five minutes later with a few funny looking prickly cucumbers. Seto-san had gone to the farm to dig them up, in the dark, just for us. We ate them, as per her recommendation, with only some salt and could not believe how delicious and juicy the cucumbers were. She kindly offered me a few to take home but alas I would have struggle to get them through Australian custom so I had to reluctantly decline her generous offer. Admittedly I did make up for it by eating quite a few… 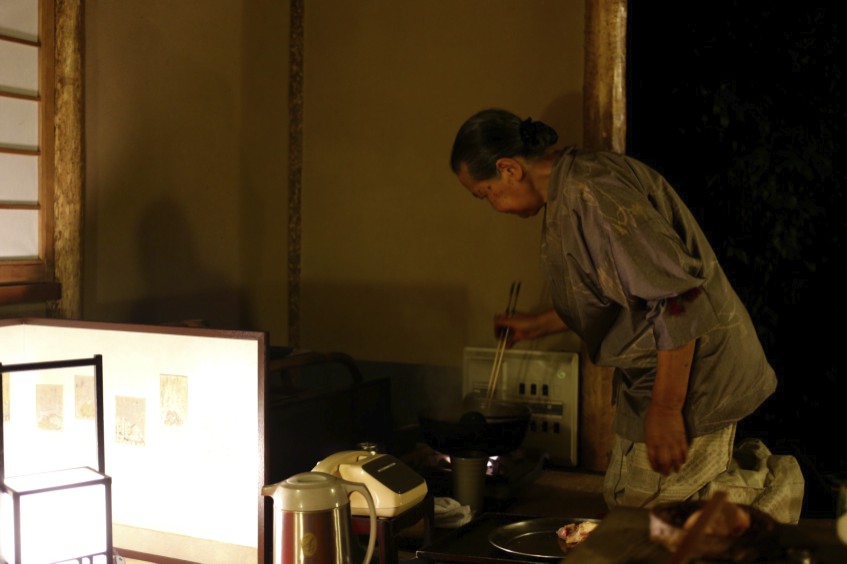 The second half of the chicken was prepared in a hot pot as a sukiyaki. Seto-san brought over a pot containing all the typical vegetables you’d expect in a hot pot, naturally all sourced from her own farm. In the nabe you could see shiitake and enoki mushrooms, spring onion, noodles, tofu and all parts of the chicken including the skin. 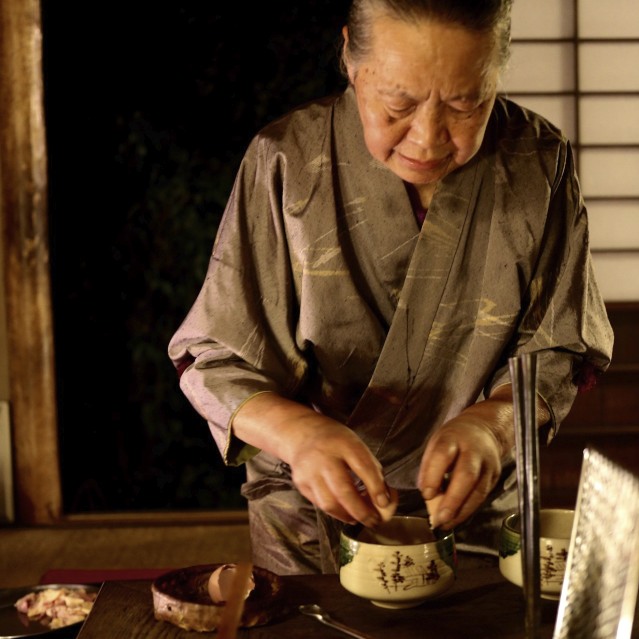 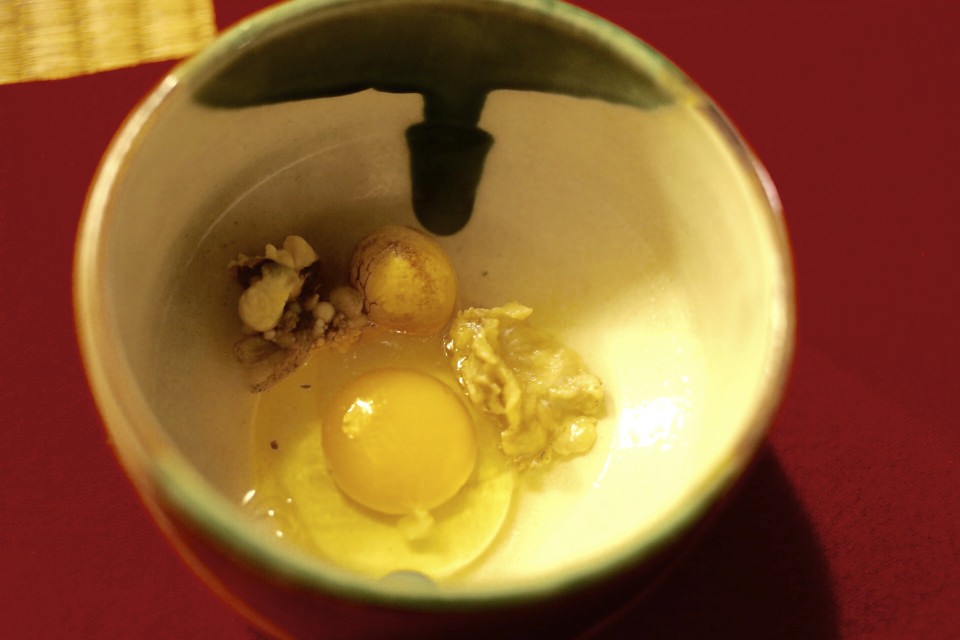 … began by serving each of us what she described as ‘an egg that’s just about to hatch’. It had an unbelievably creamy texture and flavour. Seto-san claimed the egg would have been ready the following day. 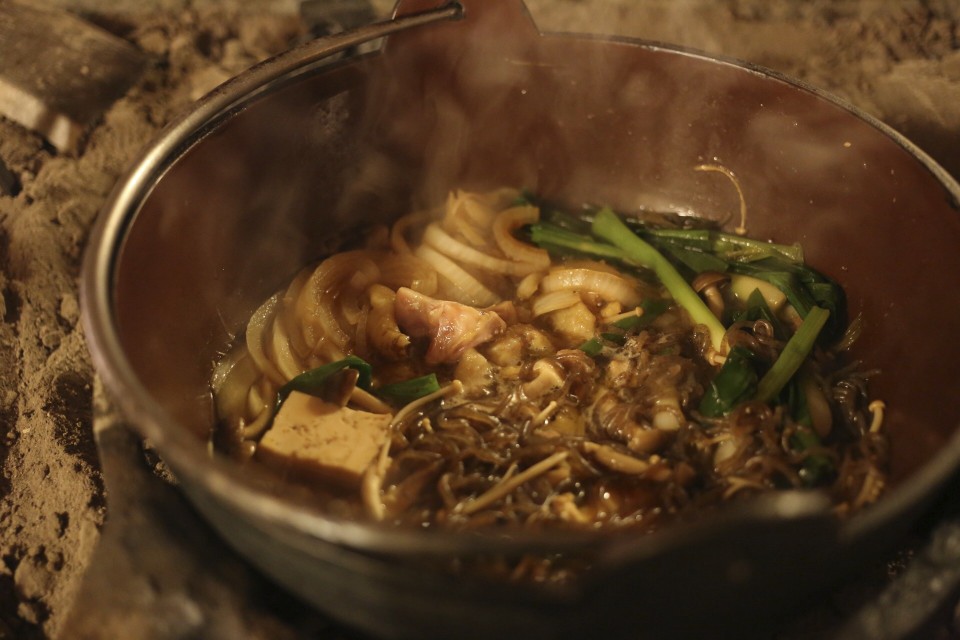 We were then left to our own devices to pick and choose what we fancied. I honestly could not tell what the star of the dish was. Whilst acknowledging that the quality of the chicken was superb, the vegetables were definitely also pulling their weight to make this the best nabe I have ever tried. Seto-san came back to serve us the remaining vegetable and meat before dashing off again to prepare the last savoury dish to complete the chicken trifecta. 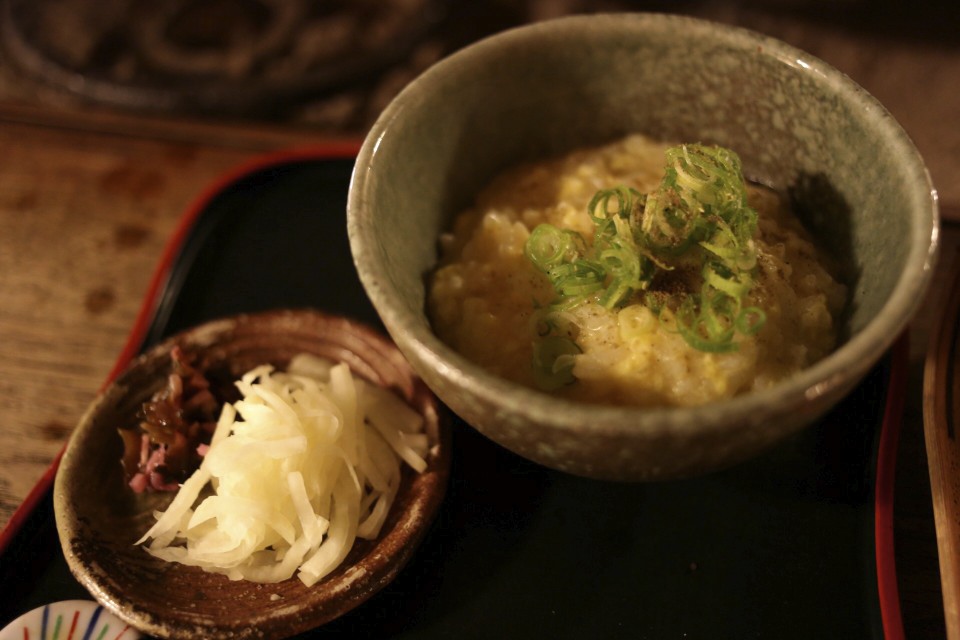 The last installment was the Zosui (雑炊), otherwise known as a Japanese rice soup made with pre-cooked rice. Unlike most zosui which use the leftover soup from the nabe, this one had been made from chicken stock that had been reduced over hours of cooking. Whilst a very simple dish, the success of this dish was based on the underlying soup and suffice to say this was very special. 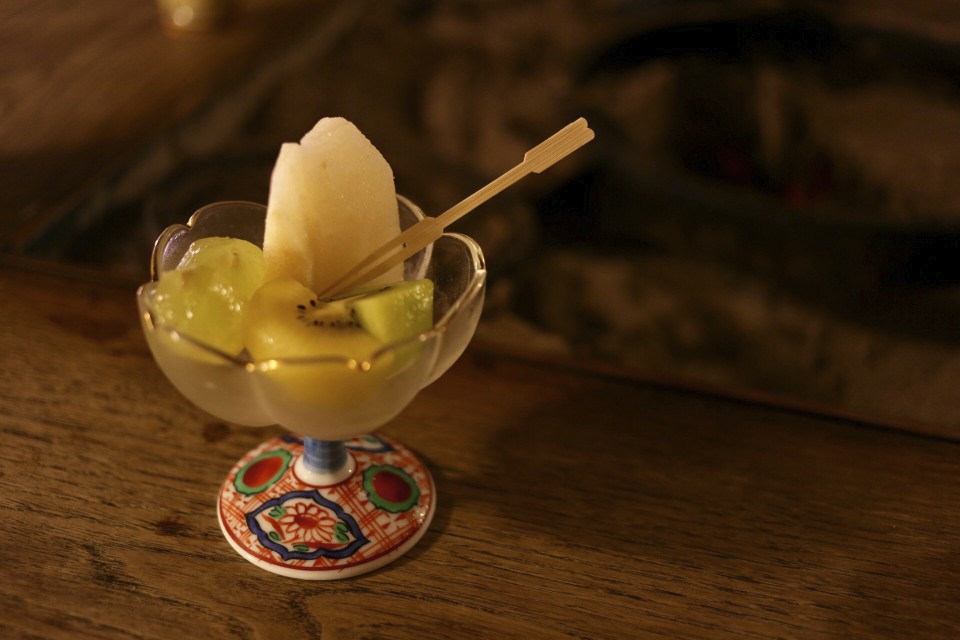 The fruits for dessert were nothing special although we were very full by this point and welcomed the light refreshing dish. 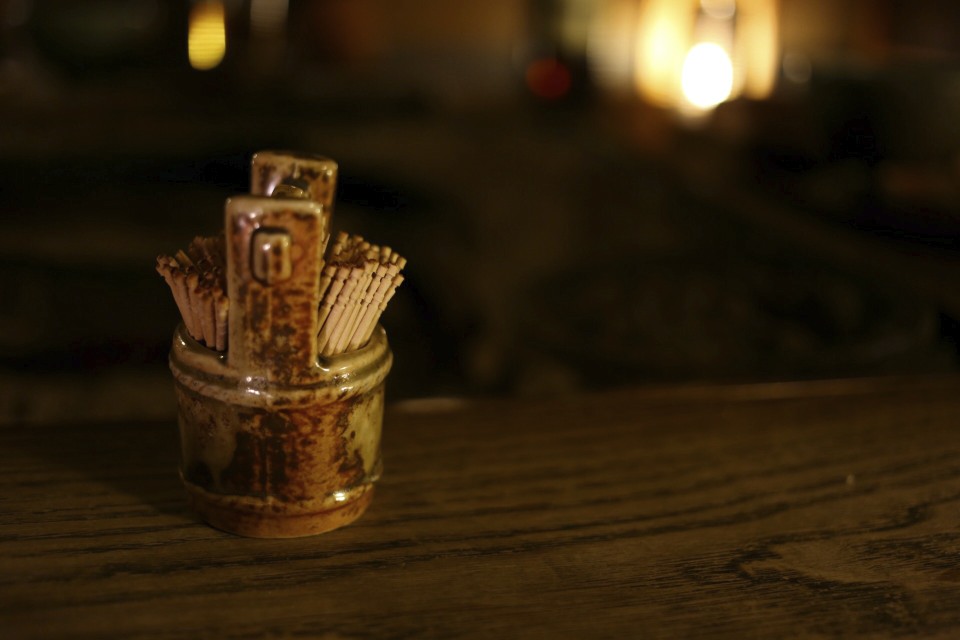 Our meal at Seto ended ever so abruptly as we had to catch one of the last trains back to the city and they seldom came by late at night. However, the two brief hours there that night left a far more profound impression and memory than any other fine dining experience. The meal at Seto was personable, humble and nothing like anything I’ve ever experienced. The fact that this meal cost each of us just over 8,000 yen was unbelievable, particularly given there was only one sitting that evening. As we slowly made our way to the station, all we could see in the darkness was Ms Seto by the entrance bowing. ‘Come back with your wife and baby’ she yells. You don’t have to worry about that, ‘I definitely will’ I shouted back…