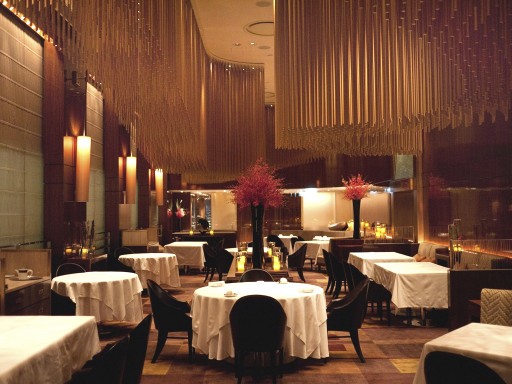 Following two consecutive years of success and recognition as the only restaurant in Hong Kong to enter the World 50 Best Restaurant list, it was no surprise to see Richard Ekkebus’ Amber taking the 4th spot in the inaugural Asia’s 50 Best Restaurant Awards in 2013. It is Ekkebus, as well as a growing pool of daring talented regional chefs, who has been instrumental in leading the gastronomic revolution in Asia, bringing the regional restaurants to the world stage of culinary excellence. 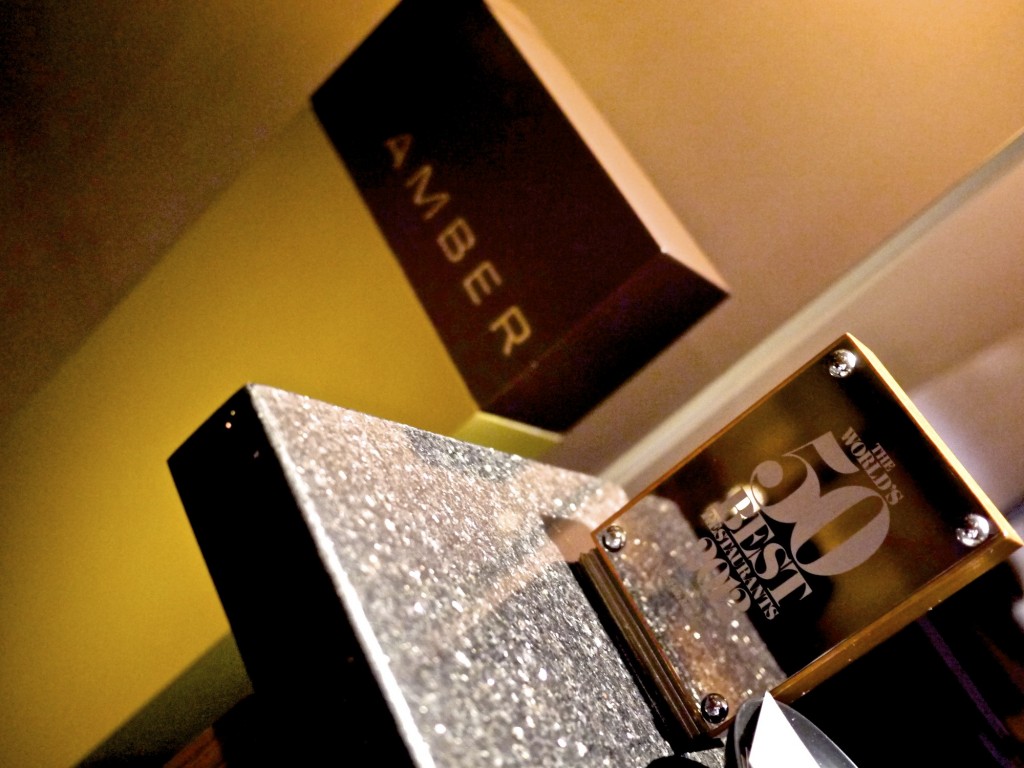 Occupying the 7th floor of the Landmark’s Mandarin Oriental hotel, Amber’s dining room designed by Adam Tihany boasts a luxurious double ceiling throughout. It consists of a special feature of 4,320 gold rods hanging from the ceiling, creating a dramatic visual effect. Similar to Tihany, Ekkebus has been inspired by the sense of mobility and internationalism of Hong Kong. This allows him to take advantage of being able to source fresh superior produces from across Asia, applying his traditional French cooking techniques with an innovative twist in presentation. The culmination of these elements makes dining at Amber a gastronomic treat and certainly worthy of the two prestigious Michelin stars the restaurant has been bestowed. 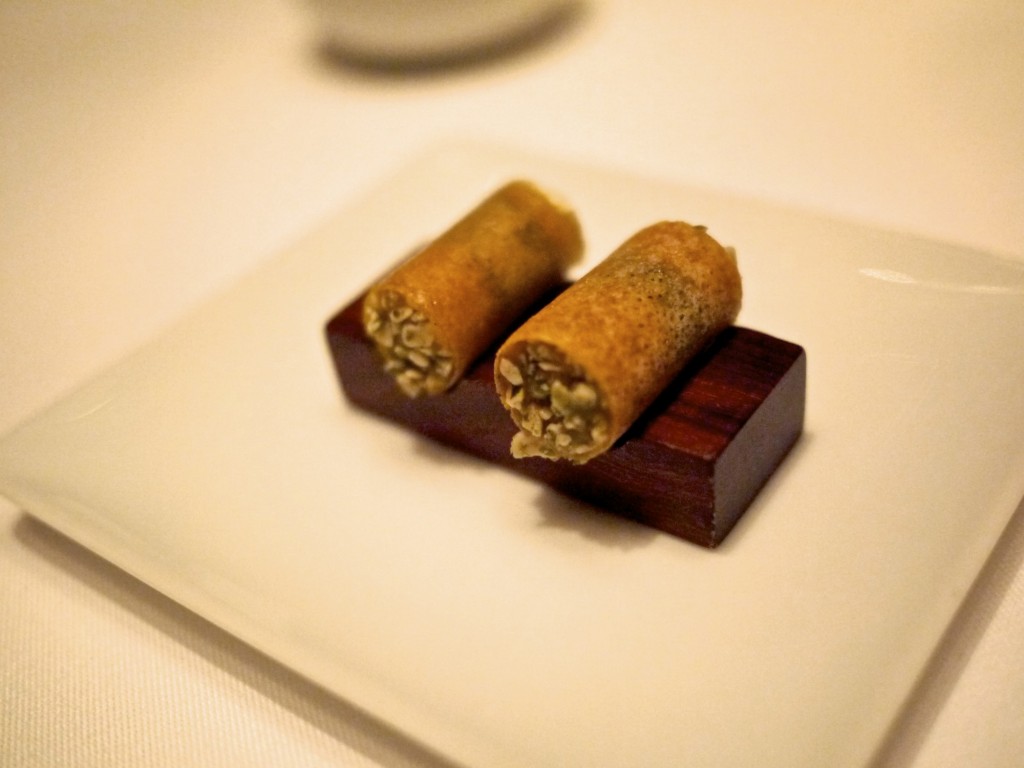 I had been waiting for this highly anticipated meal for six months as I had heard so many chefs speaking highly of Ekkebus across the world. As a glass of champagne was poured, the little treats of amuse bouches started arriving at our table, gradually progressing from the mellower flavours of a canneloni with black truffle coulis, kabocha pumpkin and pumpkin seeds which was very delicate in flavour and contrasting textures of creaminess and crunchiness. 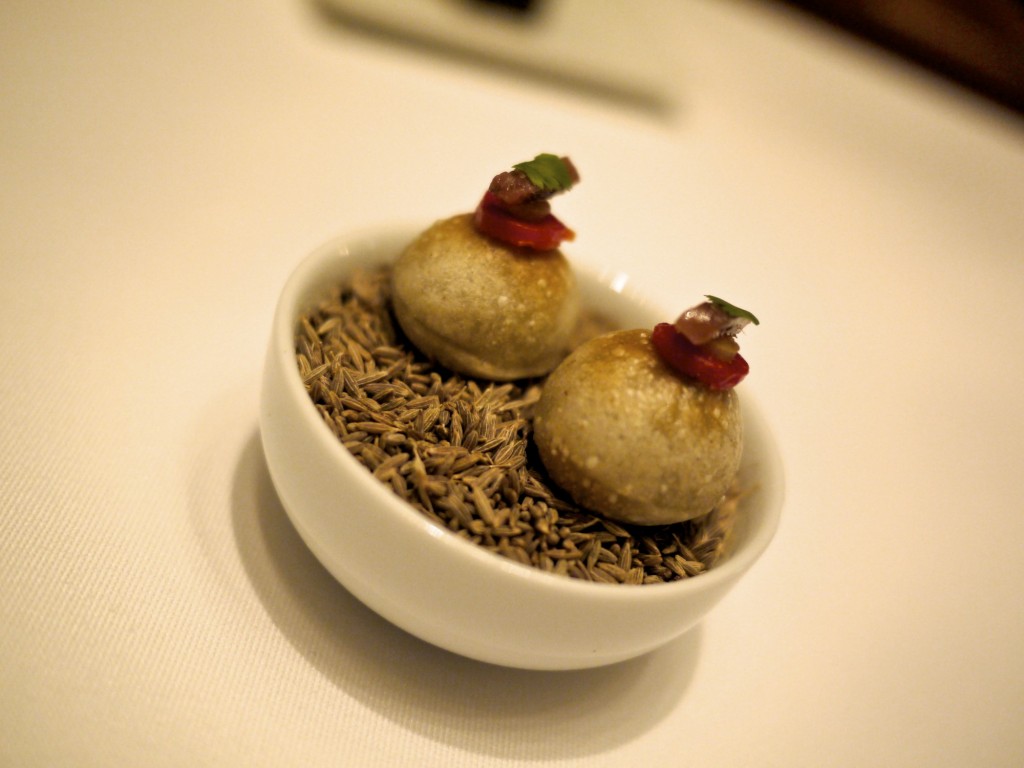 The play on texture continued with the pita balls stuffed with aubergine and red pepper which has a slight smokiness to the sweet filling. 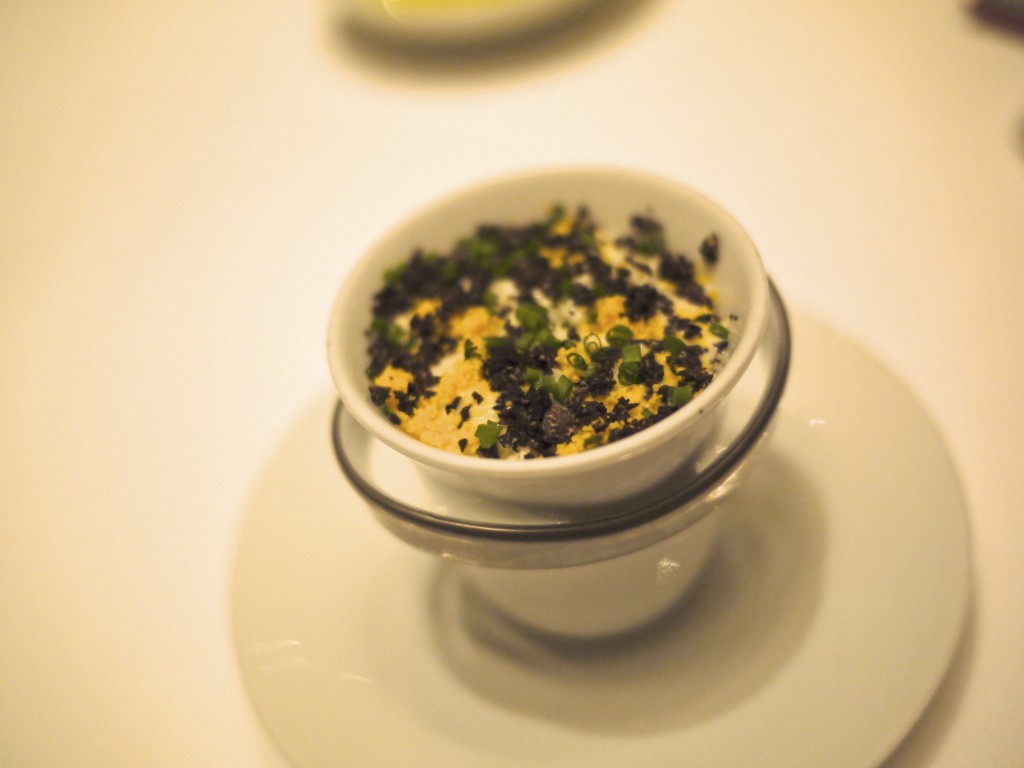 We were fortunate to be dining in March as Chef Ekkebus managed to source some top quality Perigord black truffles, and he was not shy in making use of them that evening! The cauliflower soup with egg sabayon and black truffles was very earthy, refined and in good portion size. 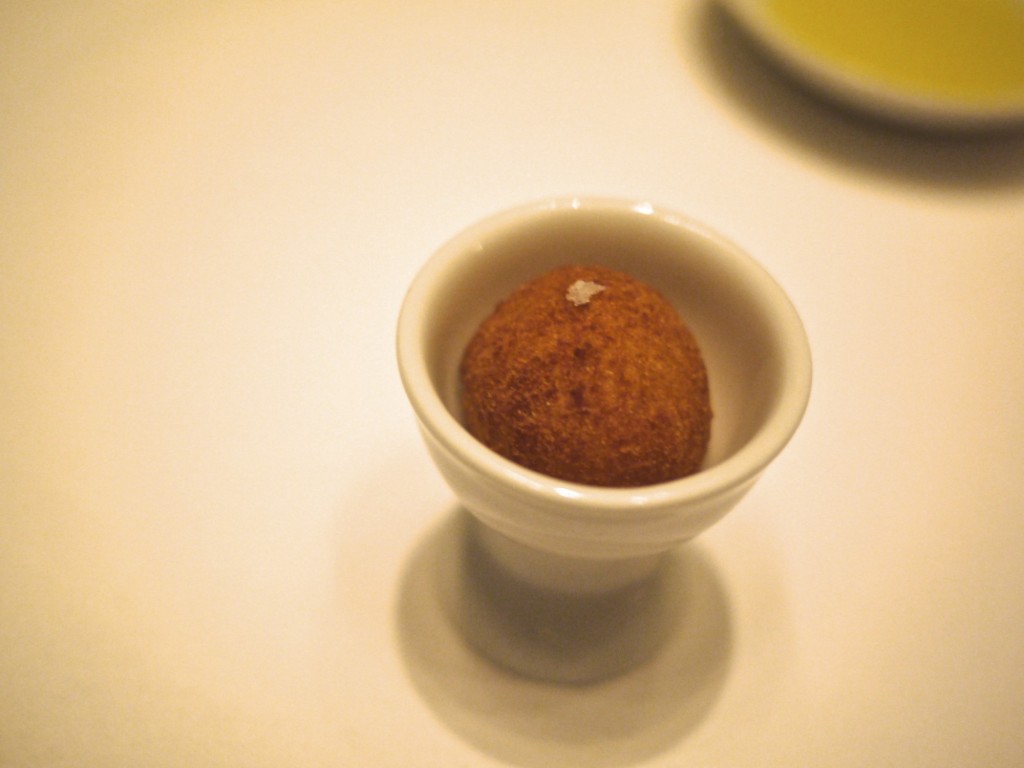 One of my favourite amuse bouche that evening was the Iberico pork and mustard fried ball. The warm filling oozed out and the flavour combination of the pork and mustard was just superb. I particularly liked the contrast of the crispy outer coating to the juicy filling in one bite. I could easily have had a couple more of these! 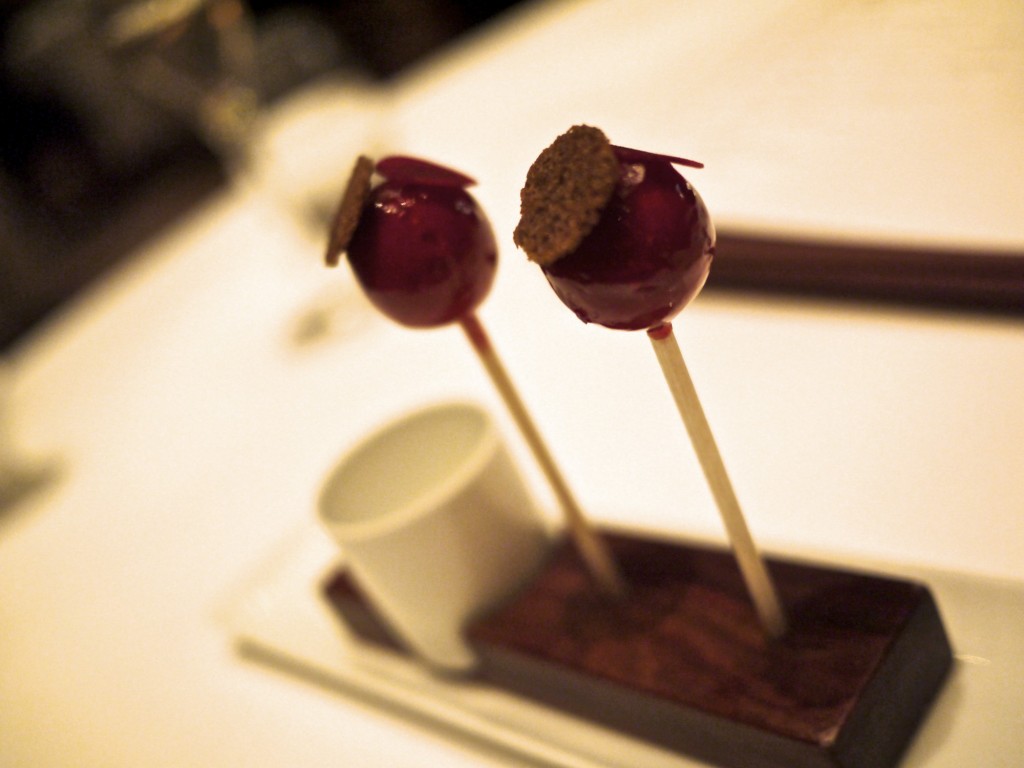 Another favourite was the duck foie gras lollipop, which was perfectly balanced with the acidity from the layer of raspberry coating and the crunchy texture of the gingerbread crisp on top. It was refreshingly cold inside to top it off. 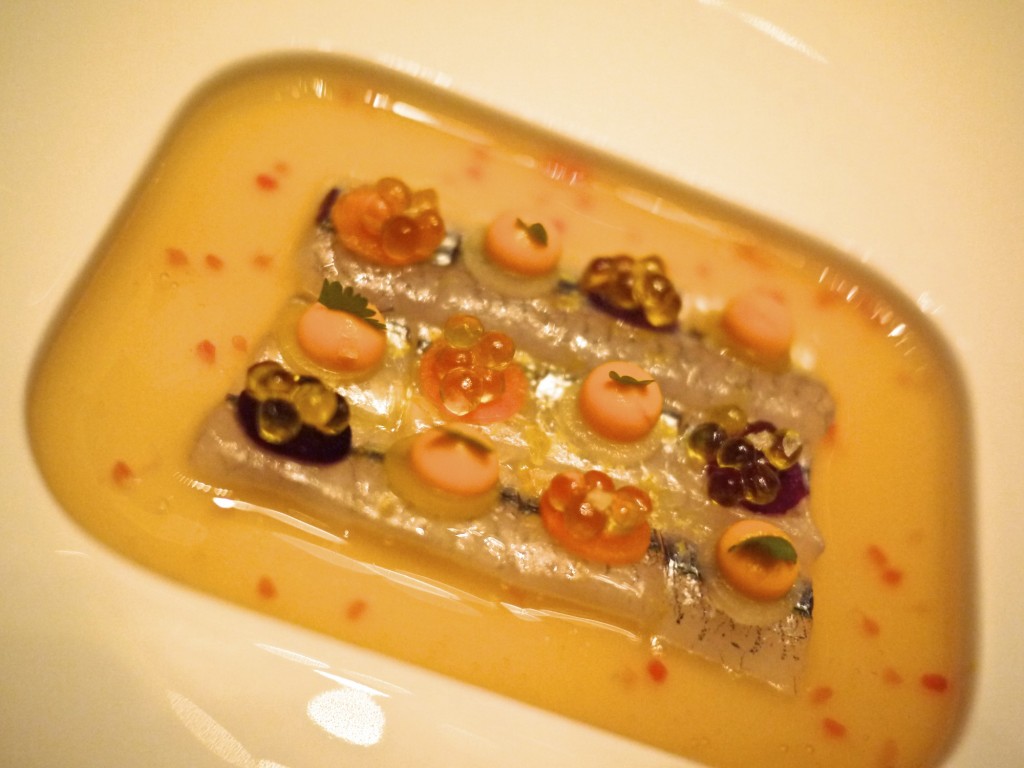 As the table was being cleared, the sommelier came over with the first wine pairing of the evening, which was a glass of a very crisp and herbaceous 2011 Domaine Laporte, Sancerre Les Grandmontains. The first course of the evening was an instant hit and almost too pretty to eat. The needlefish ‘sayori’ which had been marinated with olive oil ‘caviar’, heirloom carrots, finger lime and ginger was sourced from Japan and served raw. The acidity from the lime and the carrot and ginger bouillon cut through the delicious oily fish, and the salmon roe provided the perfect seasoning to the dish. 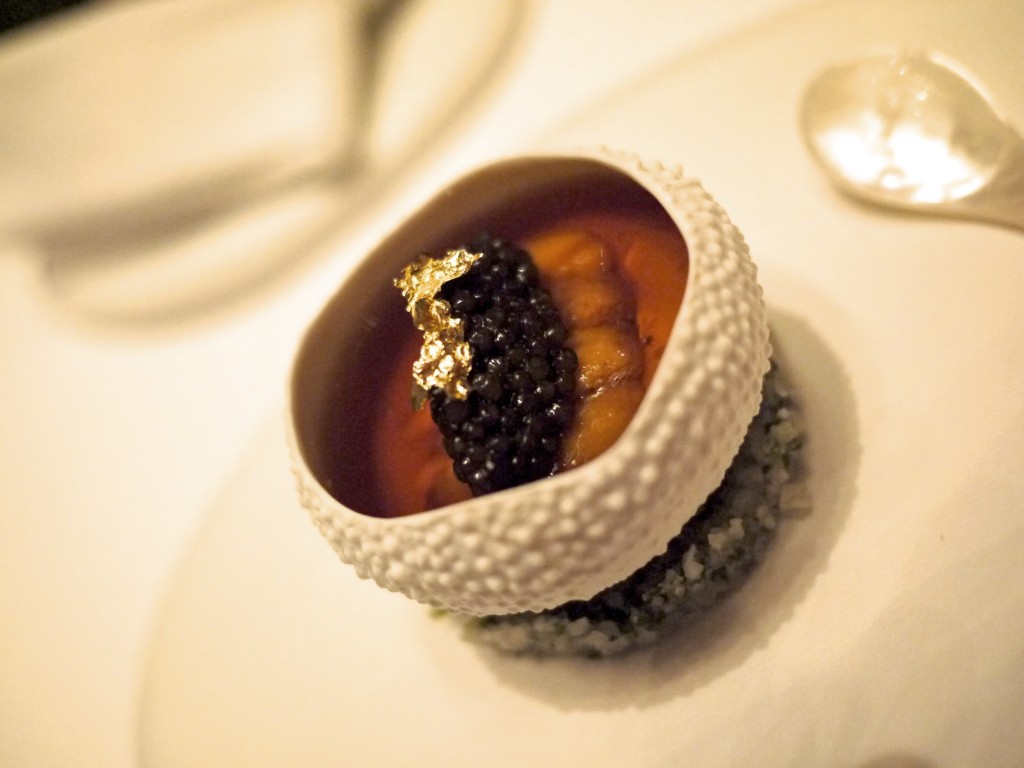 Further impressive was the signature dish of the Hokkaido sea urchin, which was served in a lobster jelly with cauliflower purée and a quenelle of black caviar. The balance between the lobster jelly, which set a canvass of the flavour of the sea, the elegant and creamy sea urchin, and the salty black caviar was flawless. Moreover, unlike typical exported sea urchin, this one was fresh from the day and did not contain any myoban which gives the bitter aftertaste. It was a delicious taste of the ocean that already justified my trip. 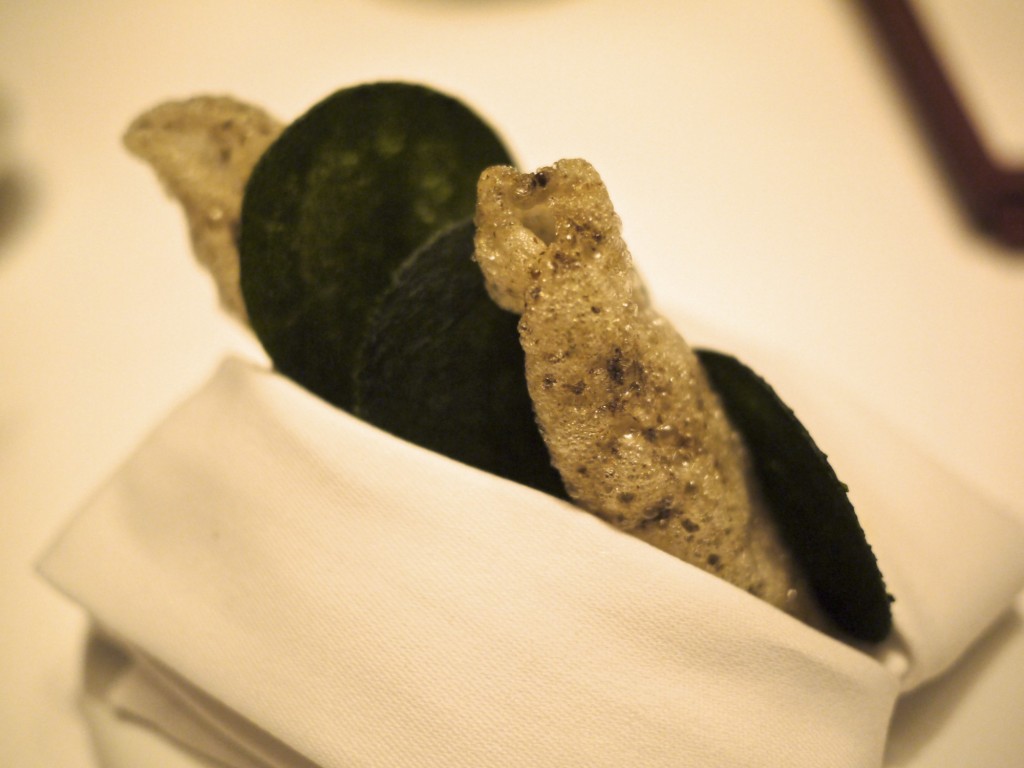 The sea urchin was served with crispy seaweed waffles on the side. 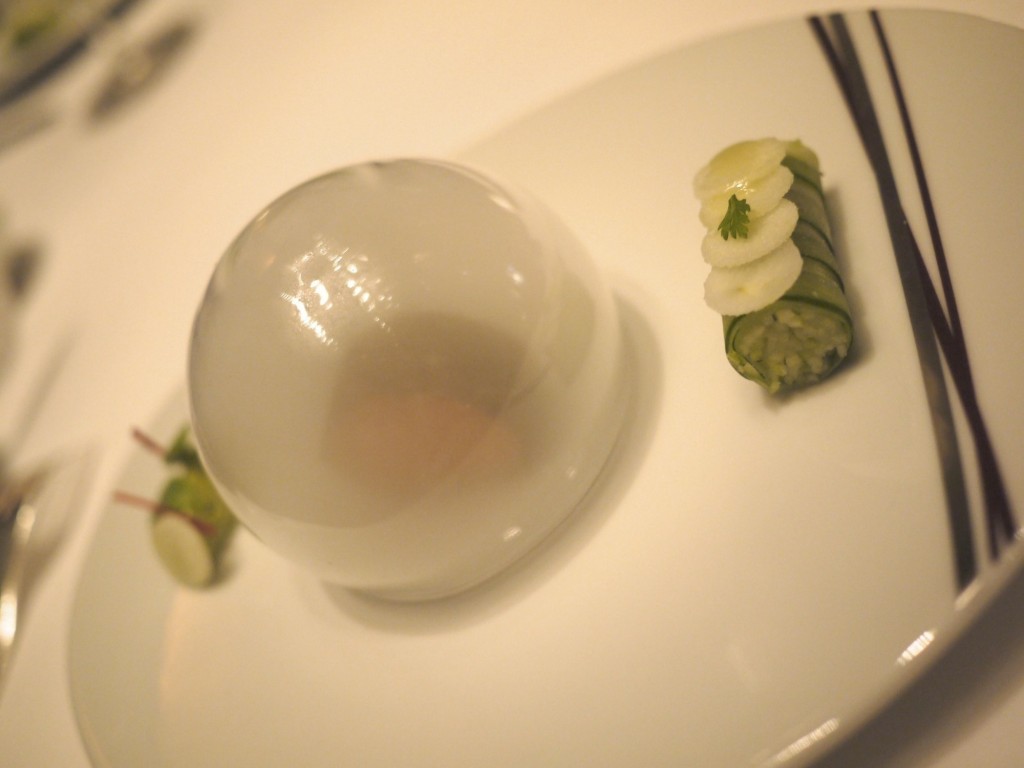 The Tasmanian Salmon was an inspired dish. The confit salmon was served as it was still being smoked in a glass bowl. As the bowl was lifted you could smell a lovely woody aroma, and what I thought was ingenious was the way in which Ekkebus infused the smoke into the dish by a second method of using the same glass bowl to serve the accompanying sake of NV Born Tokusen Junmai Daiginjo. 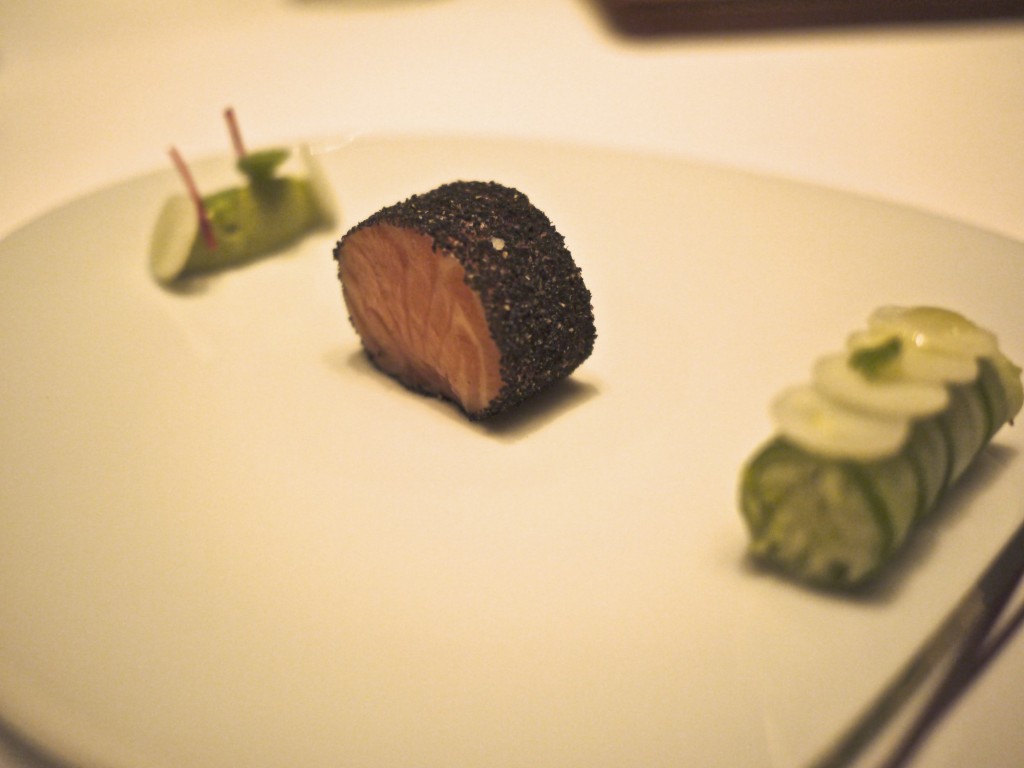 The salmon was covered in squid ink and bread crumb coating and melted in your mouth with very little effort of chewing. I was worried the smoke was going to ruin the delicate salmon but that was unnecessary. The avocado purée and the granny smith apple wrapped in cucumber added some much needed acidity to cut through the salmon and lift the dish, and the horseradish was fortunately not overpowering but present on the palate. A very well balanced and clever dish that left me speechless! 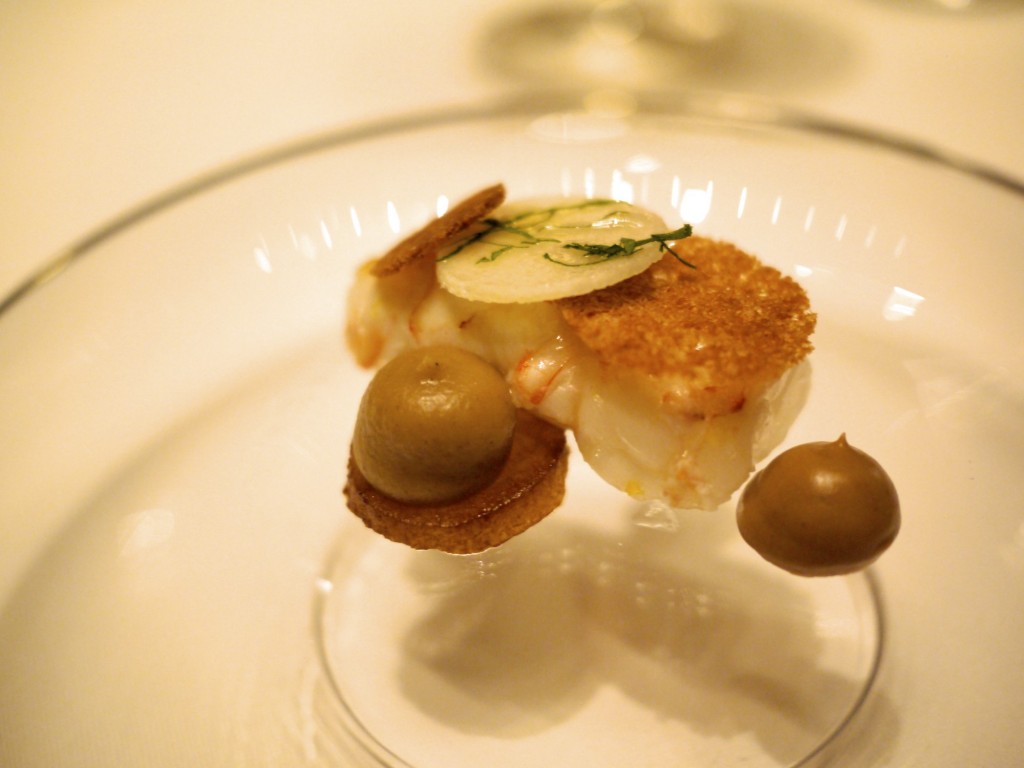 Langoustine seared with bergamot, dark roasted brioche, caramelized parsnip purée and raw “passe crassane” pear. The langoustine sourced from New Zealand was fresh and perfectly cooked with a beautiful juicy texture. The Italian parsley and bergamot made a significant difference to the sweetness coming from the parsnip purée and the pear and the textural element from the brioche completed the trifecta. 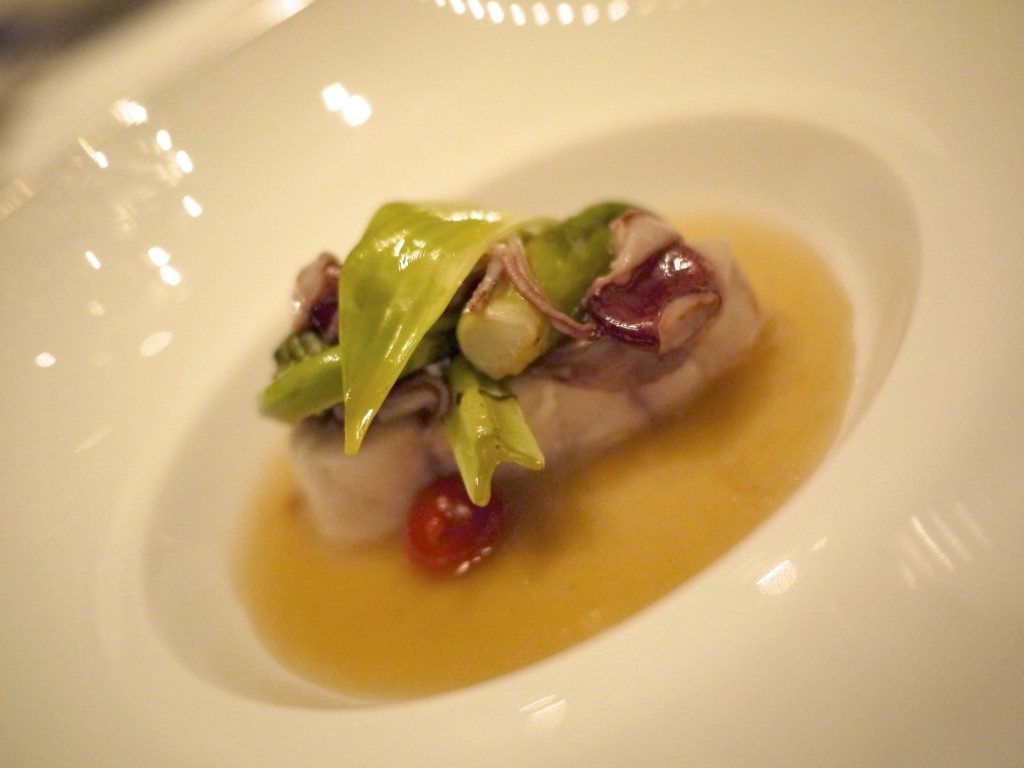 Takaba Grouper poached with tete de veau, barbecued bell pepper purée, seared firefly squid and spring vegetables from fukuoka. The purée went very well with the grouper and the vegetables had a good crunch to them. Whilst the fish was also good, I must admit it was far less exciting on the palate and visually compared to the preceding dishes. We felt a bit flat to finish the seafood segment of the dinner on the grouper but we were wrong… very wrong! 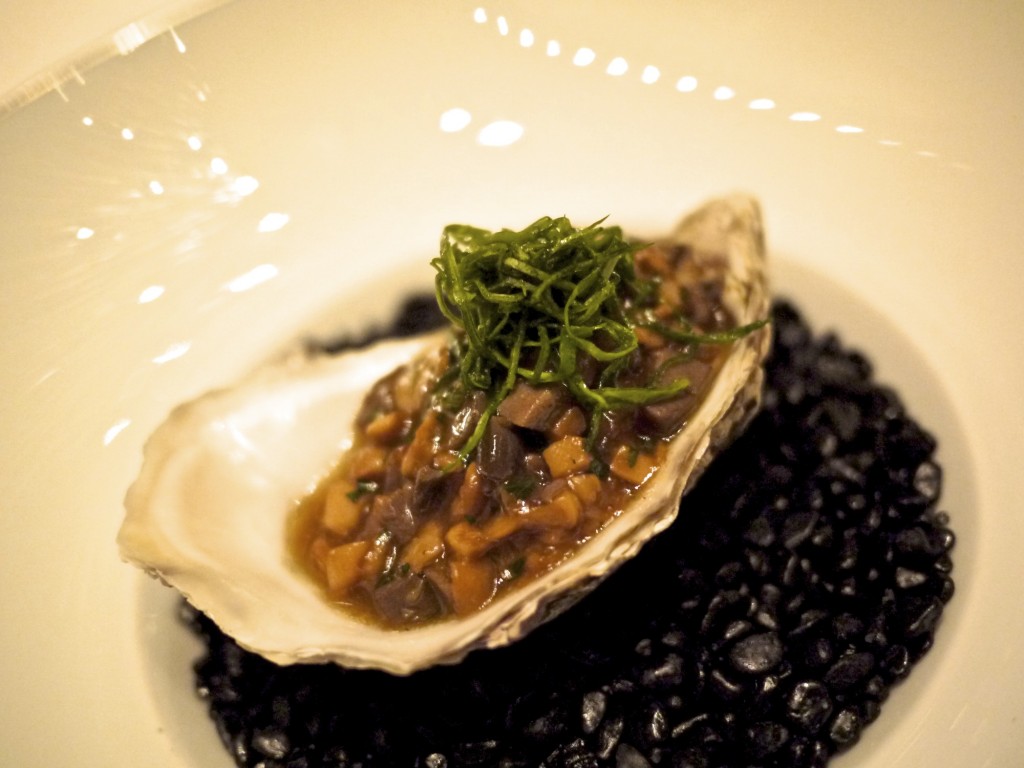 We expected to be served our main meat course next but Chef Ekkebus decided to make a last minute change and incorporate one last seafood dish, which ended up being the best dish of the night! We were fortunate enough to have been served with an off-the-menu special course of the ‘ebisu’ oyster. This had been cooked in its shell at 67 degrees and was served with wilted tetragon, shallots, duck gizzard, pieds de moutons mushroom and vin jaune. It was truly a jaw-dropping dish that married European and Asian techniques, ingredients and flavours. I had never encountered this unique combination, which started off rich and deep from the amalgamation of the ingredients and ended with the clean finish of the oyster hiding underneath. My companion and I had no words to exchange other than the look of bewilderment and delight, interrupted only with nodding heads each time we took a bite! 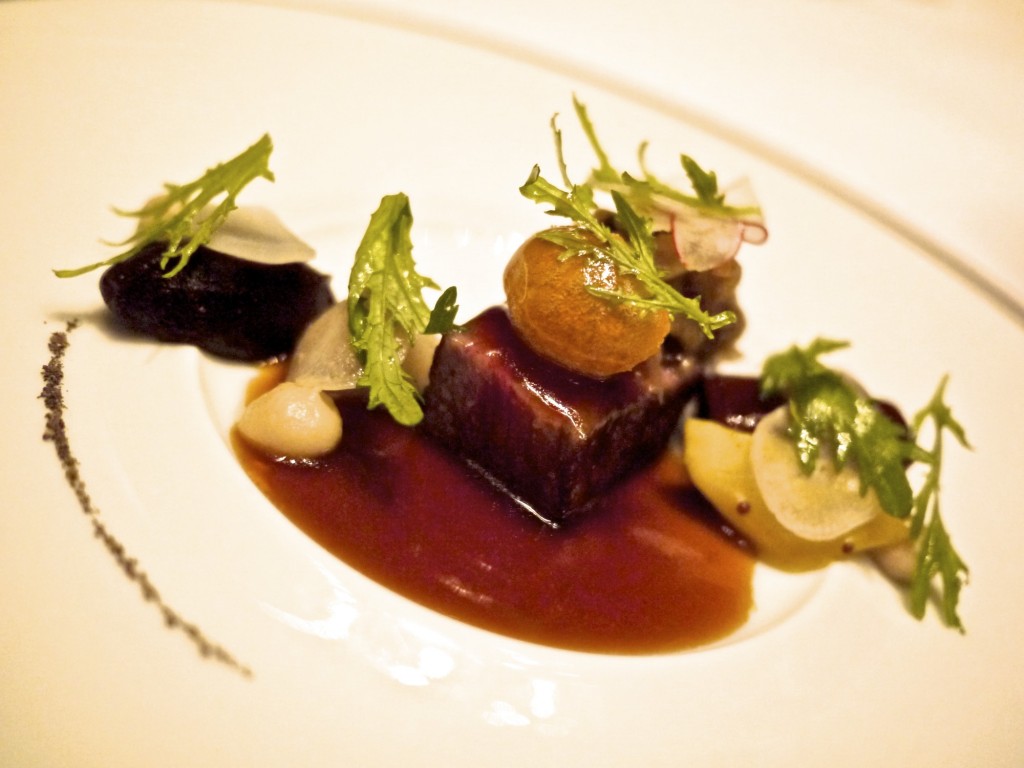 The subsequent course of the Kagoshima wagyu beef striploin with a purée of oven roasted Cevennes onion and braised short ribs was great but was a little overshadowed by the preceding course. Don’t get me wrong, I was quite impressed with the marbling of the beef and the four distinct preparations of the onion – puréed, thinly chopped, caramelized and pickled. I think it is fair to say that most meat dishes I have come across would struggle to follow the previous act. 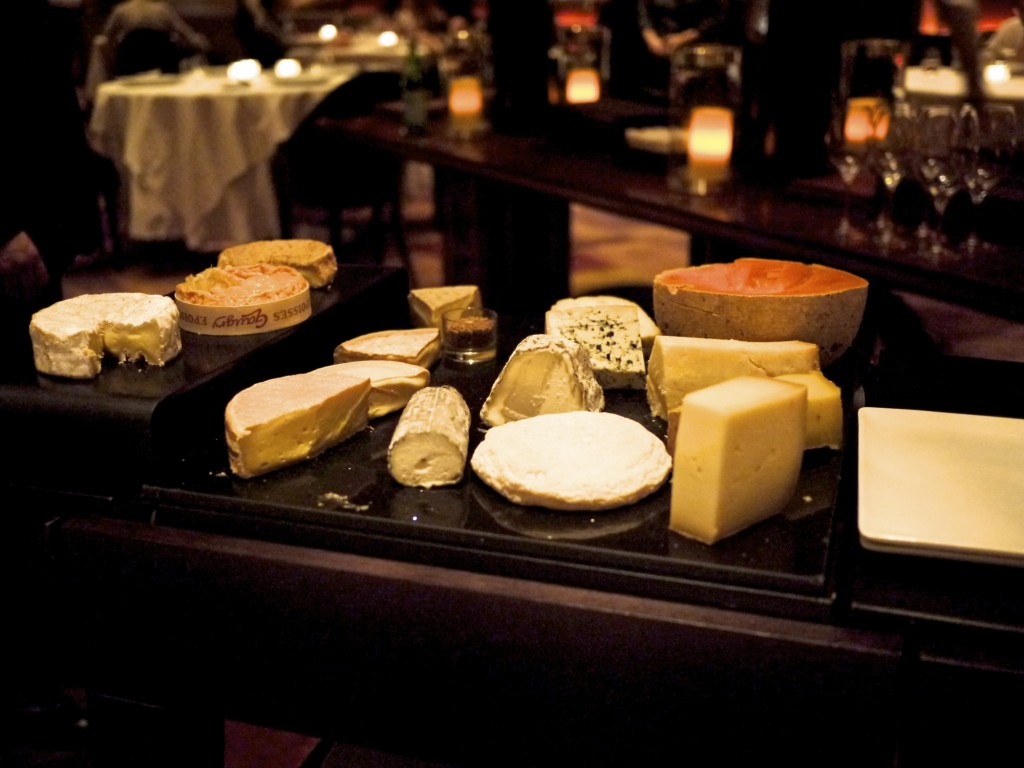 Similarly, I couldn’t argue with the quality of the cheese supplied by Bernard Antony. I was pleased to see a great selection of unpasteurized cheese including my favourite Epoisses and Mimoullete, nicely matched with a glass of a 2004 Luis Canas, Seleccion de la Familia, Rioja. 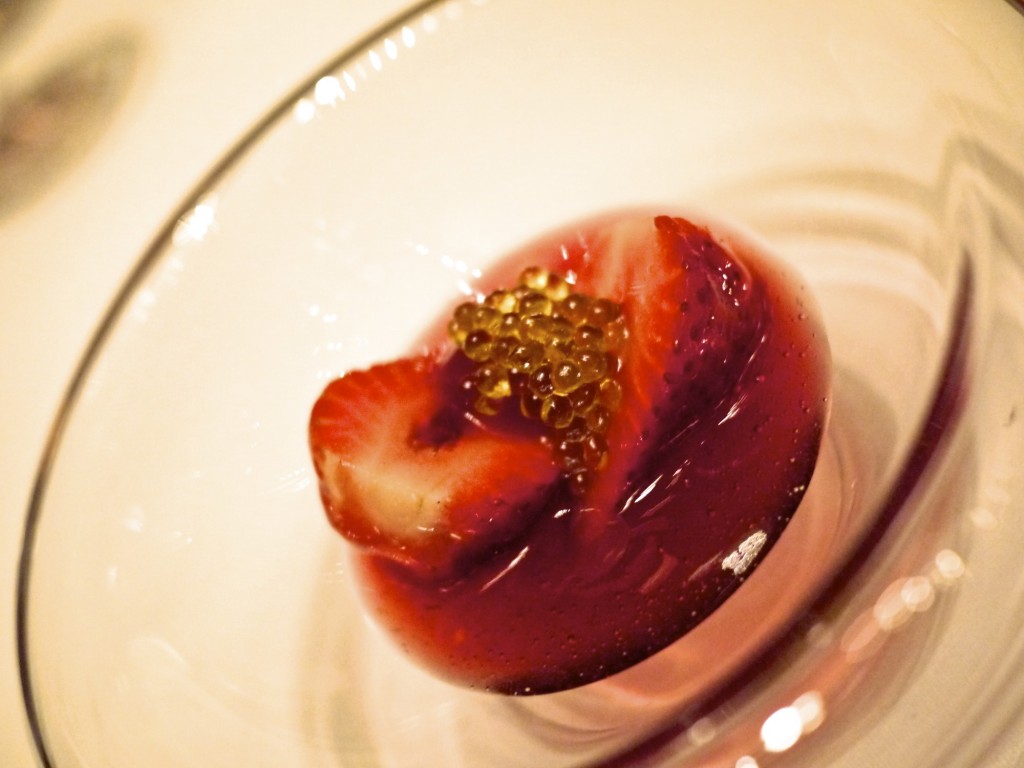 I didn’t quite know what to expect for the finale as a typically rich French dessert would have rather been disjointed to the fresh and light arrays of dishes I had thus far. I also feared that it would be difficult to follow the extraordinary dishes that had preceded it. However, the Amaho strawberry from Fukuoka, served in a hibiscus infusion, olive oil, Sichuan pepper and cassis granite was light, refreshing and nothing short of novel. The flavour from the strawberry was as impressive as the ones I had tasted in season in England and the Sichuan pepper added an interesting dimension of spice to the contrasting cold cassis granite. 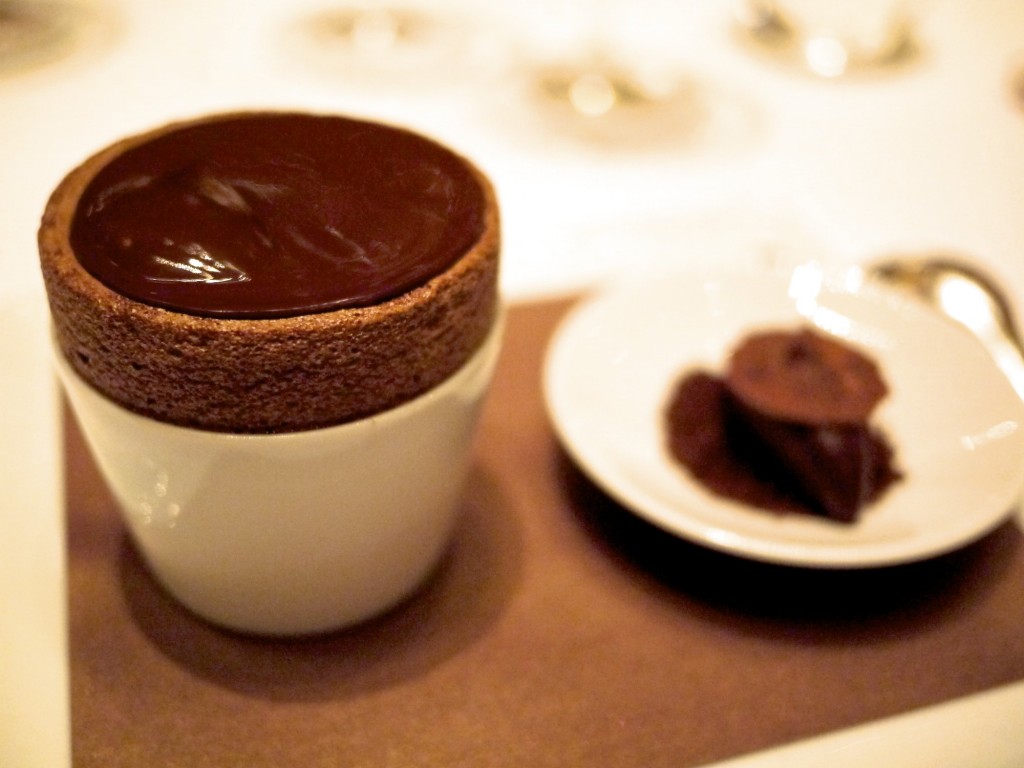 The finale of the tasting menu was an Abinao 85% chocolate soufflé served with a cacao sorbet on the side. Whilst chocolate soufflé is perhaps not construed to be the most original of dessert, the execution was against flawless and exemplified Ekkebus’ roots and skills in traditional French cuisine. The contrast of the flavour and differing temperatures of the melting chocolate and sorbet lifted this dessert to something more interesting, yet familiarly comforting. Naturally, the quality of the ingredients used to make the desserts made the difference as well. 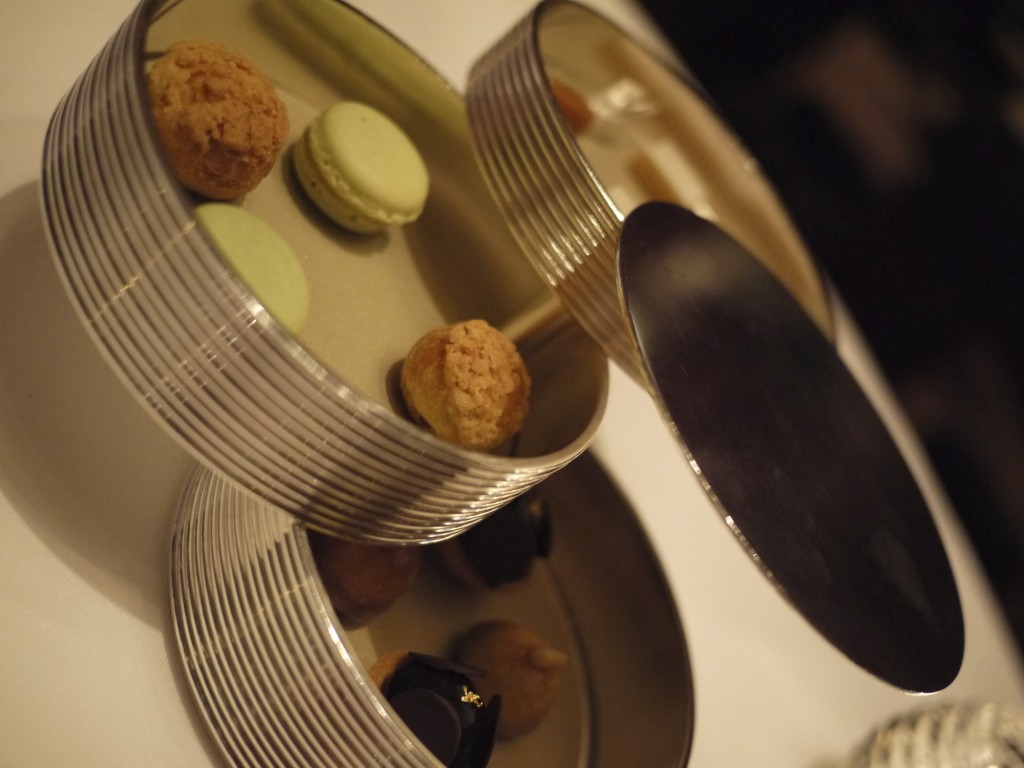 The petit fours looked amazing but I struggled to get most of them in as I was utterly full and exhausted from the culinary experience over the past four hours, not to mention the copious amount of wine that was paired with each course. 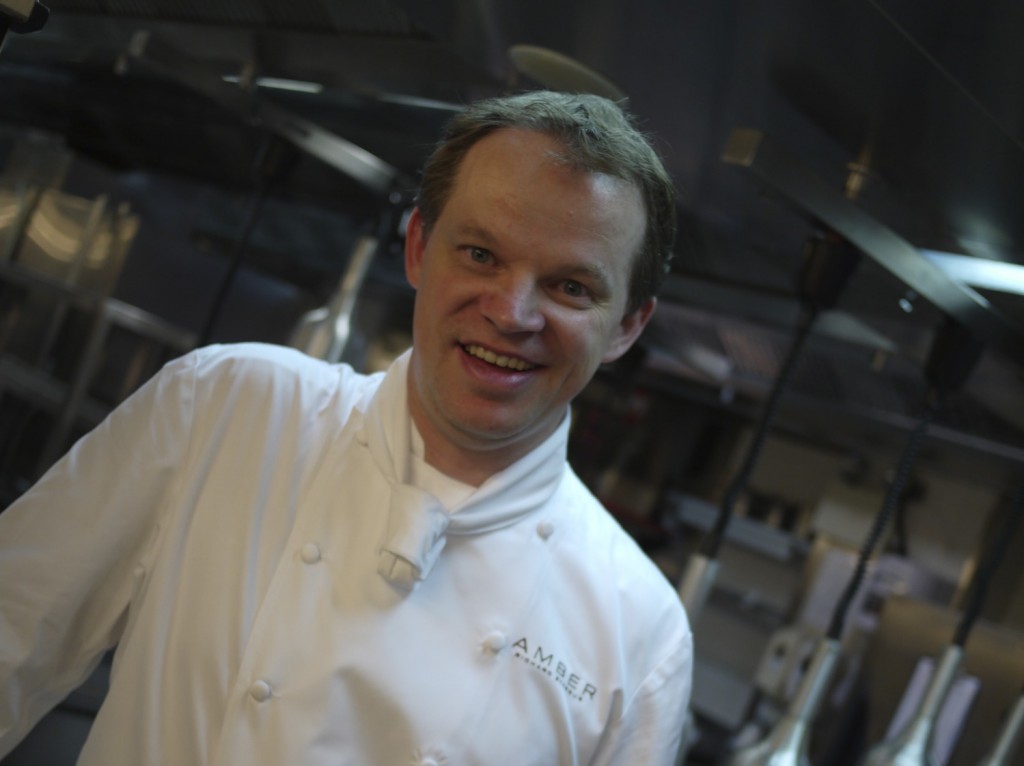 While I expected possibly a few good dishes from this meal, I am always cautious when restaurants focus on foreign cuisines and flavours, given the obvious geographical disadvantage of sourcing the produce.  In this case however, I was blown away. Having tasted some of the finest Paris had to offer, I was quite taken by Ekkebus’ skills and ability to efficiently utilize and incorporate the wide array of Asian produces to his cooking style; the ebisu oyster being a perfect example. What’s more, I think many of us forget the importance of that balance between personable and professional service skills of the front of house that still remains absent in majority of fine dining establishments across Asia. This was something that Amber mastered with abundance, and they did so with a passion that was contagious. There’s so much Asia has to offer and I look forward to the discovery of other great produces through Ekkebus’ cuisine over the forthcoming years.