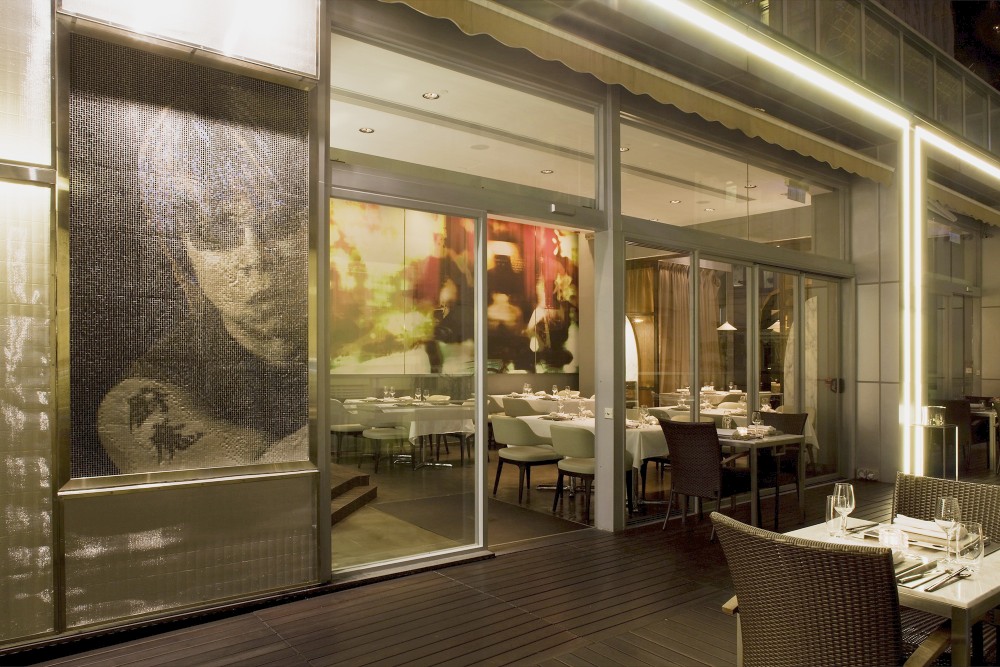 Little introduction is needed to Alvin Leung and his ‘X-Treme’ Chinese cuisine at his two Michelin starred restaurant, Bo Innovation, in Hong Kong. Leung is known for being one of only handful of chefs in Asia who looked to molecular cuisine, when it was starting to take off in the west, and applied its technique to their local cuisine. I’ve had my fair share of good Chinese food throughout my childhood having lived in Hong Kong and Singapore for a good part of my youth. I had also discovered molecular cuisine through elBulli and the Fat Duck. I must admit, however, that I lacked the imagination to envisage what the culmination of the combined elements would look like. More importantly, I wondered whether it would be another case of style over substance, compromising the all important taste. 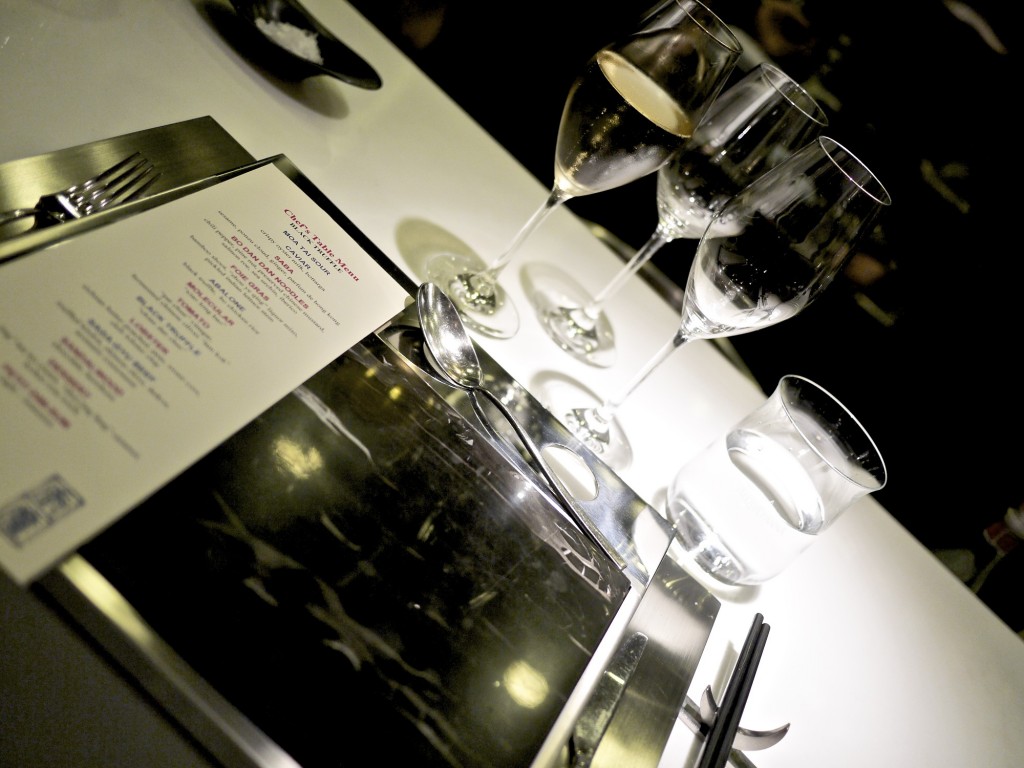 Following a swift journey to my hotel from the airport, I immediately set off for my old neighborhood of Wan Chai. Despite my previous knowledge of Hong Kong, I had some difficulty in locating the restaurant. Luckily, I managed to get some help from a local and, after a brisk walk to a side street and up an inconspicuous lift, I was finally there! I must confess by the time I found my way I was a little flustered. I would therefore advise most people to take a cab. On entering the lift, and after having caught my breath, I left behind the hustle and bustle of the city. I was fortunate enough to have been one of only three people occupying the Chef’s Table that evening, which normally had enough room and space for six. I assume it was a last minute cancellation as the place was packed all night! 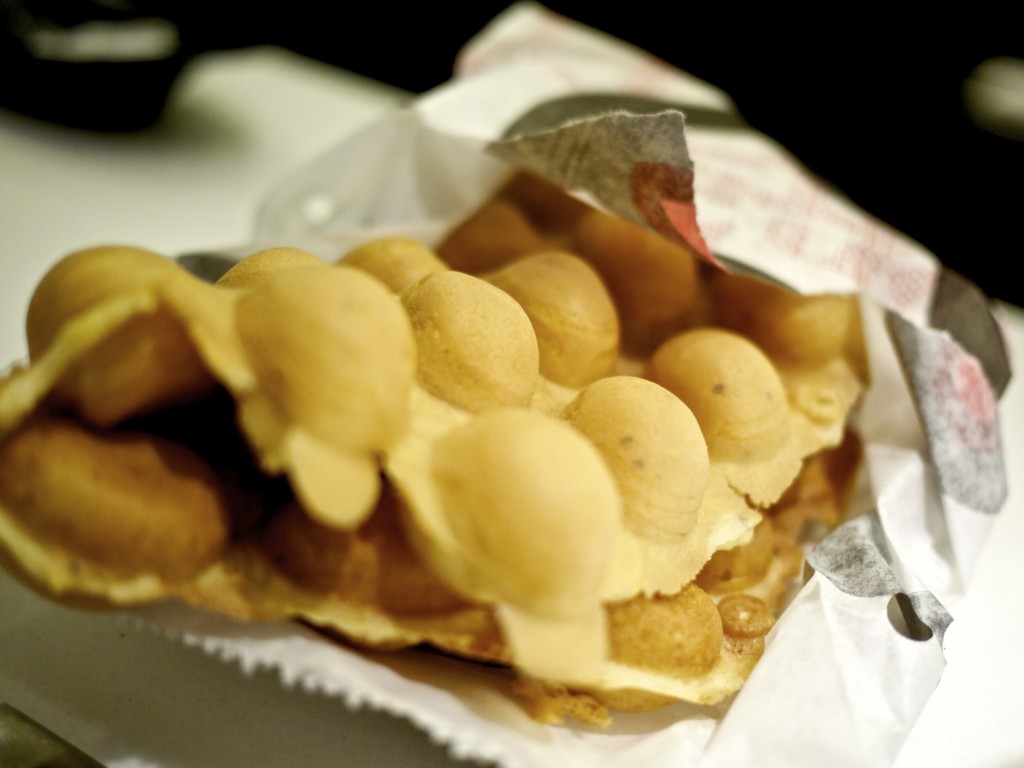 As the sommelier poured my glass of champagne, one of the chef’s behind the counter explained to me that bread was not typically served with a Chinese meal. I frowned a bit, I am a bit partial to bread, but before I could interrupt they offered one of Hong Kong’s iconic street foods, “egg waffles”, as a substitute. Of course, this was not an ordinary egg waffle. This one contained Iberico ham and English custard. The sweetness of the dough married well with the salty Iberico ham and it was difficult to set them aside to avoid filling my stomach before the meal. 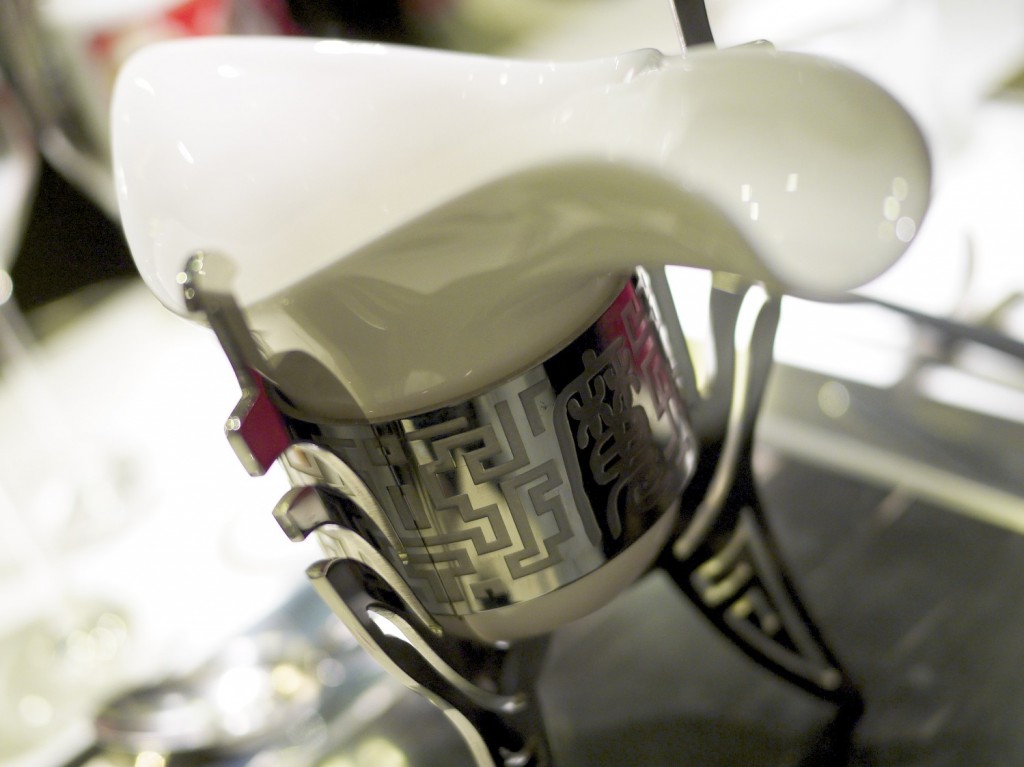 Almost immediately after the explanation, a beautiful vessel containing the amuse bouche of a Maotai (local Chinese liquor) sour was brought over to me. This particular one was made from Kweichow Maotai, one of the most revered of its kind where the tastes were reminiscent of pear, walnut and almond. The addition of the lime, egg white and grenadine made this an extremely refreshing palate cleanser. 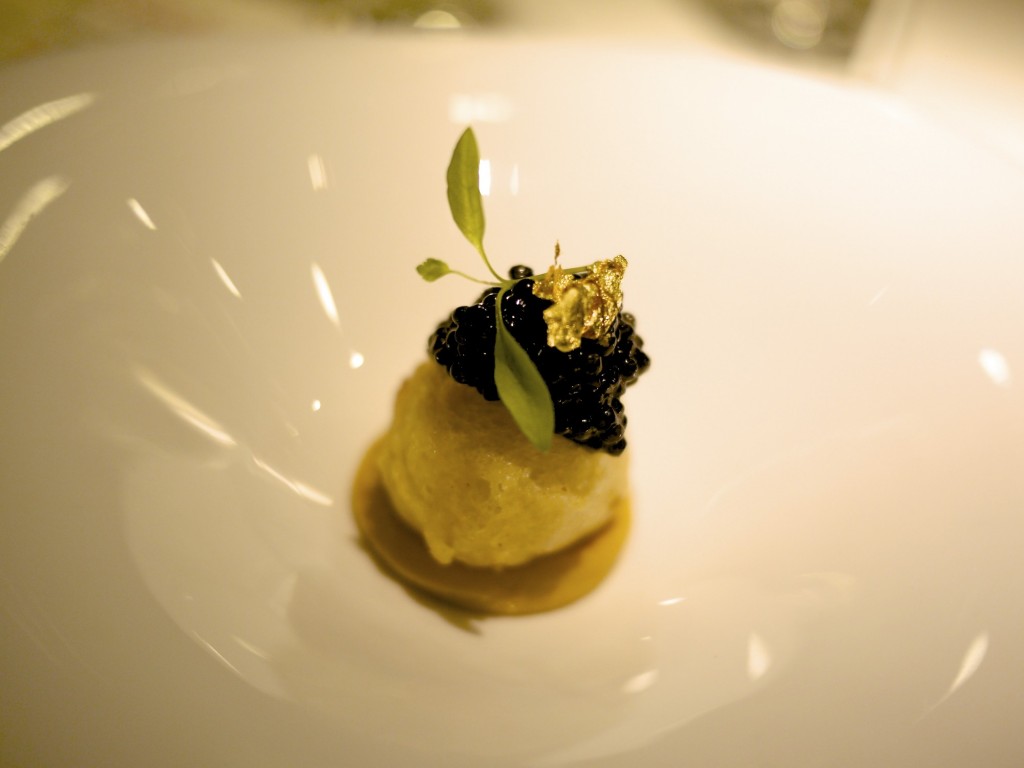 On to the first solid course of the evening and the caviar, crispy oyster milk and bottarga was an immediate success. I was not aware that China produced black caviar and this particular one was sourced from Heilongjian in the Northeastern region. The bite size morsel was beautiful in flavour and the tuna bottarga (cured roe of the tuna) inside the creamy base was not overpowering despite bringing a distinct note to the dish. Combined with the crispy texture and flavour of the oyster milk, this dish had a lasting aftertaste of the sea, washed down perfectly with a glass of the Domaine J Laurens NV. 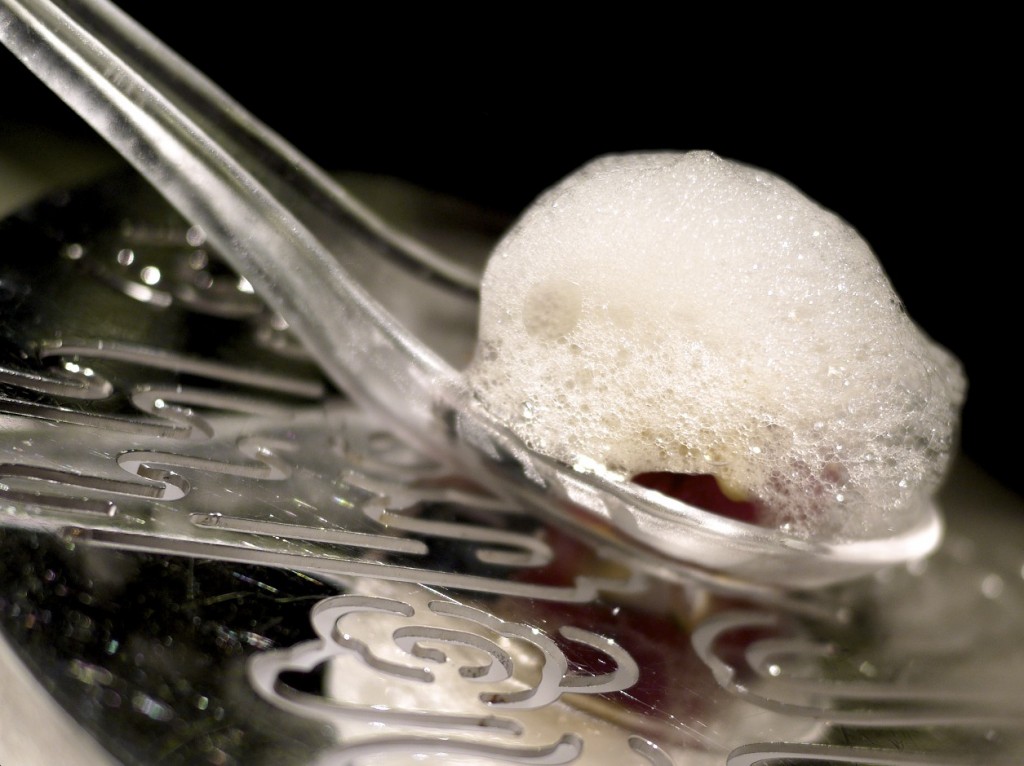 The next course of the Saba, sesame, ponzu cloud and ginger was served on a metal bowl that produced a rose aroma of “parfum de Hong Kong” through the use of dry ice. The oily fish married well with the sesame and melted in your mouth. Ponzu of course is a tried and tested combination that works well with fish and the ginger removed the slight fishiness leaving a clean taste on the palate. 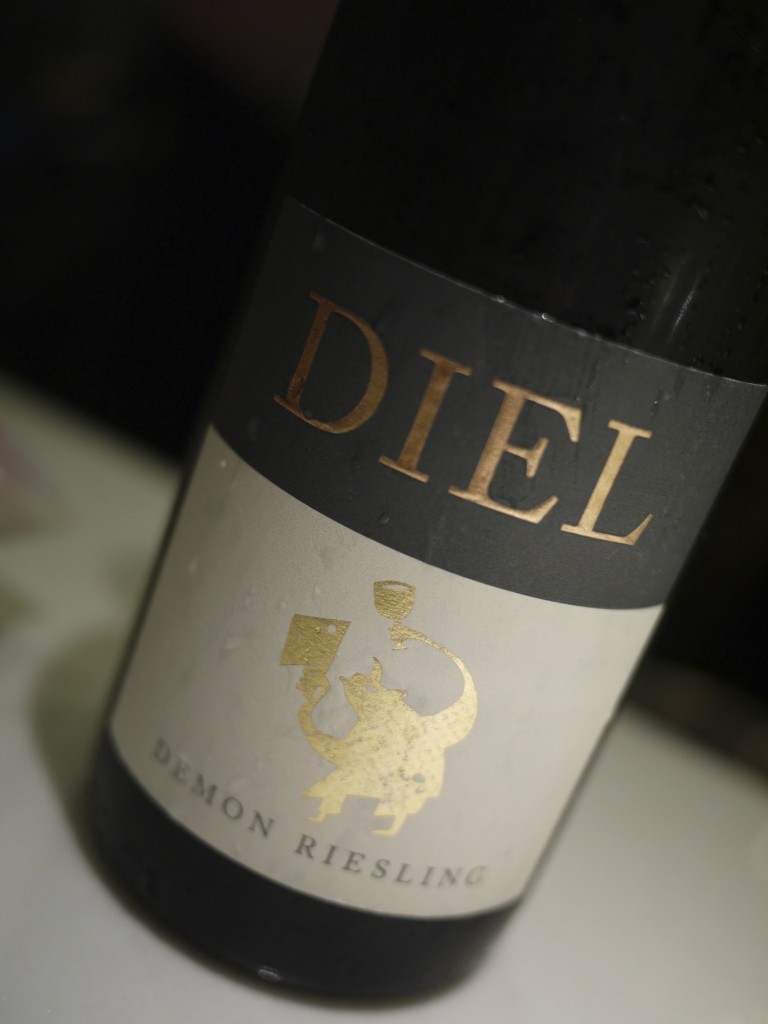 A refreshing glass of Schlossgut Diel – Demon Riesling – Nahe 2010 was then poured for the next two courses. I noticed the logo and immediately realised this was bottled for the Demon Chef! 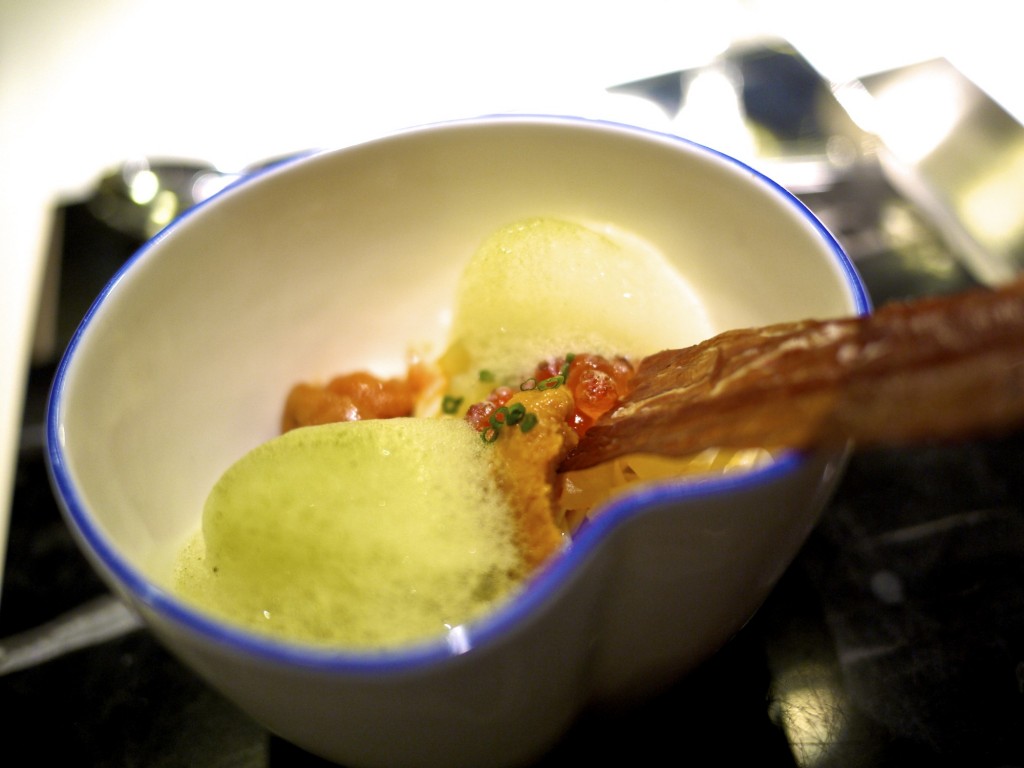 Next up was the Bo Dan Dan Noodles, chilli pepper, pine nut, preserved Chinese mustard, salmon roe, sea urchin, Iberico. The sea urchin from Hokkaido was delicate but not lost in the heat of the chilli. The salmon roe didn’t add much to the dish as it was surprisingly unsalty. The only seasoning component to the dish was the Iberico ham which I probably would have incorporated in smaller portions to spread across the dish. Whilst the flavours were delicate and beautiful, I thought there was a lack of seasoning overall. 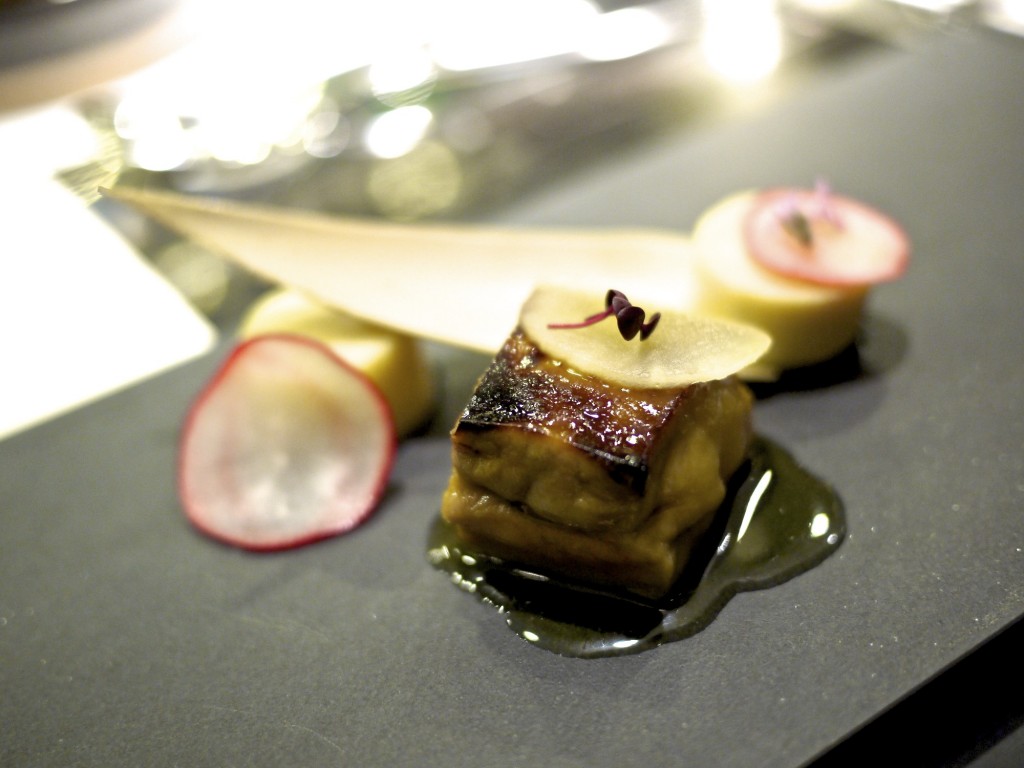 Slightly better was the foie gras, bamboo shoot, “zhou ye qing” liquor miso, pickled Indian lettuce stem. It was a generally sweet dish and the marinade of the liquor infused miso was quite pleasant. The bamboo shoot and pickle added the textural element to the soft foie. 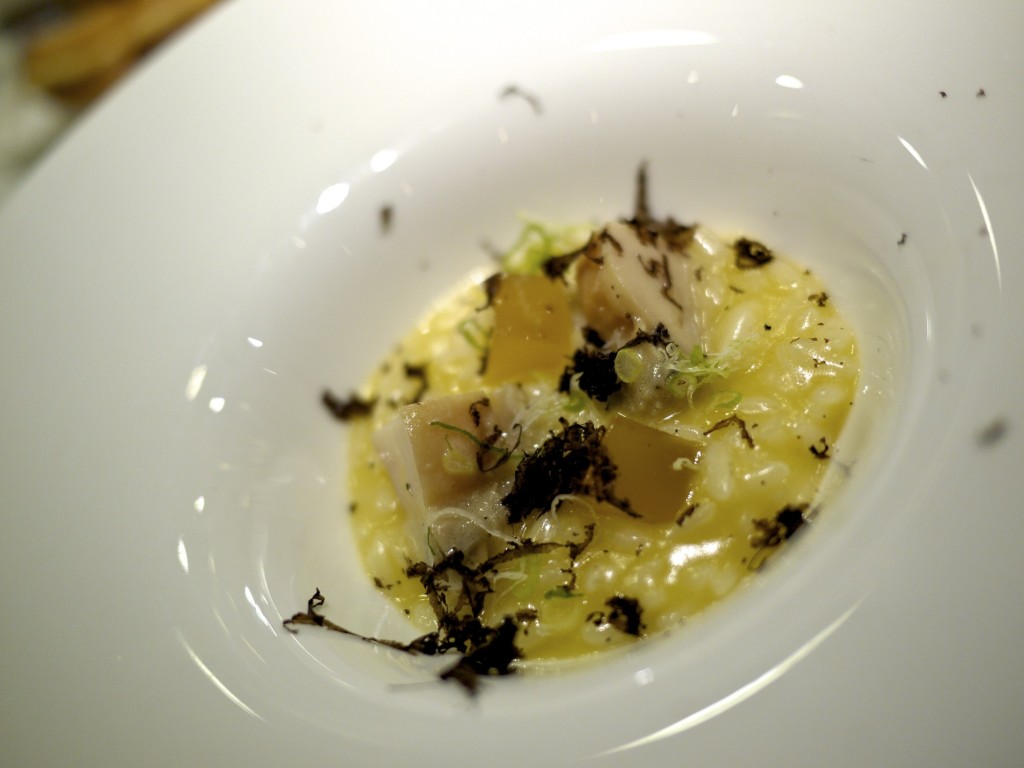 One of the highlights of the meal, with perhaps less visual impact than some of the previous dishes was the Abalone, black truffle and Bo chicken rice. The rice was cooked in a stock containing chicken and Japanese sake and served al dente. The flavour of the South African abalone was further magnified with the accompanying abalone jelly. To top it off, the Perigord black truffle added an earthy canvass to the rice making it a marriage of flavour in heaven! This was indeed ‘X-Treme’ Chinese cuisine without a shadow of a doubt. 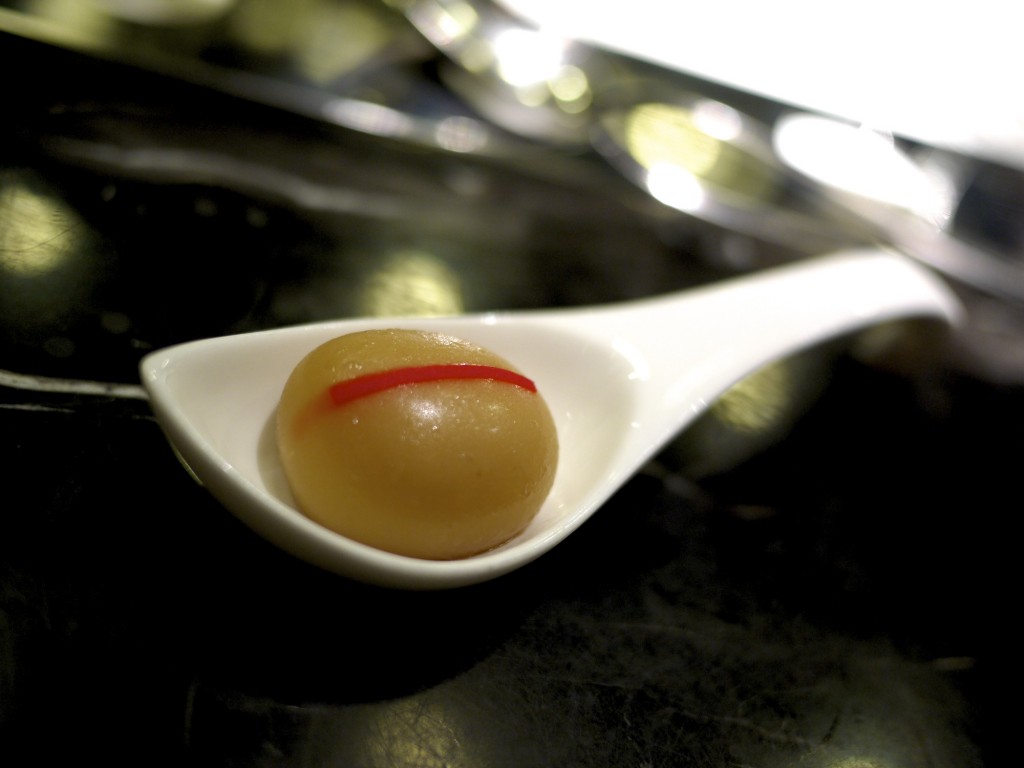 I had heard many people talk about Chef Leung’s signature dish of Molecular “xiao long bao”. I tasted some of the finest xiao long bao’s during my ten day trip to China two years ago so I was curious to see whether Leung had compromised the dish for the sake of style. I was advised to eat this in one bite as it would literally fall apart after the first bite. Sure enough, there was an explosion in my mouth! It was bizarre to have the flavour of xiao long bao with no texture at all but it was sticky and delicious with a long and rich aftertaste in my mouth. 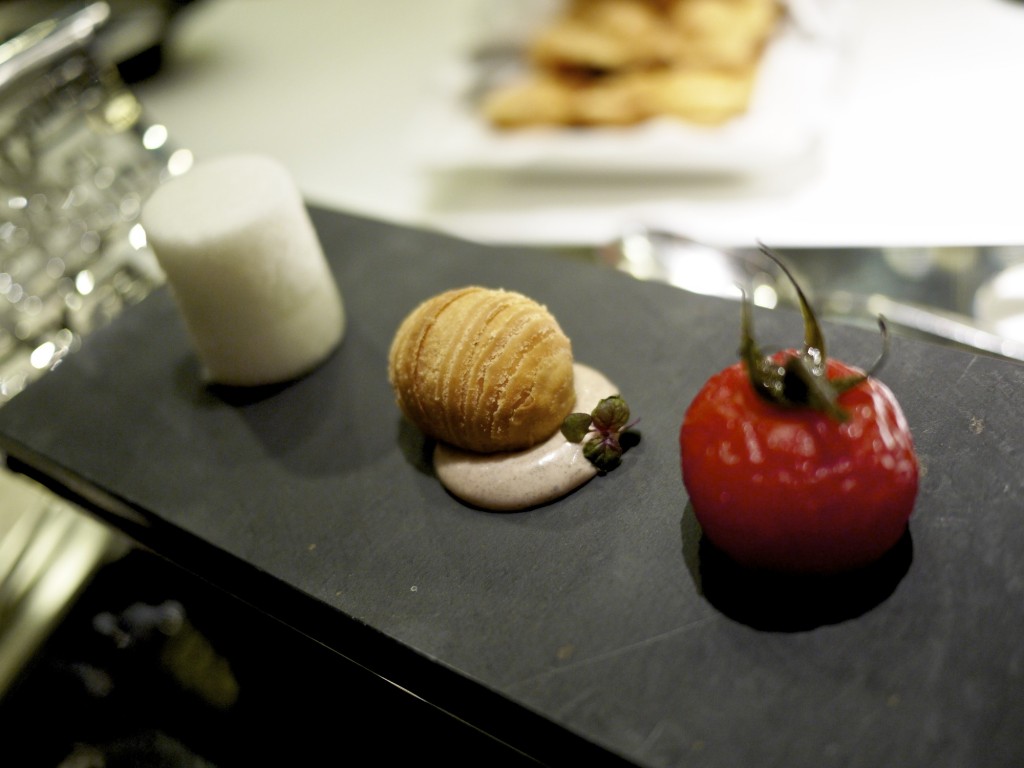 A very refreshing course following the rich xiao long bao was the Tomato, “pat chun” Chinese vinegar, fermented Chinese olives “lam kok”. The tomato on the right was cooked in a sweetened black Chinese vinegar “pat chun”, followed by tomato wrapped in Chinese pastry which was then deep fried with fermented Chinese olives “lam kok”  from Chiu Chow, followed by an airy tomato consommé tower which incorporated gelatin to keep its shape. 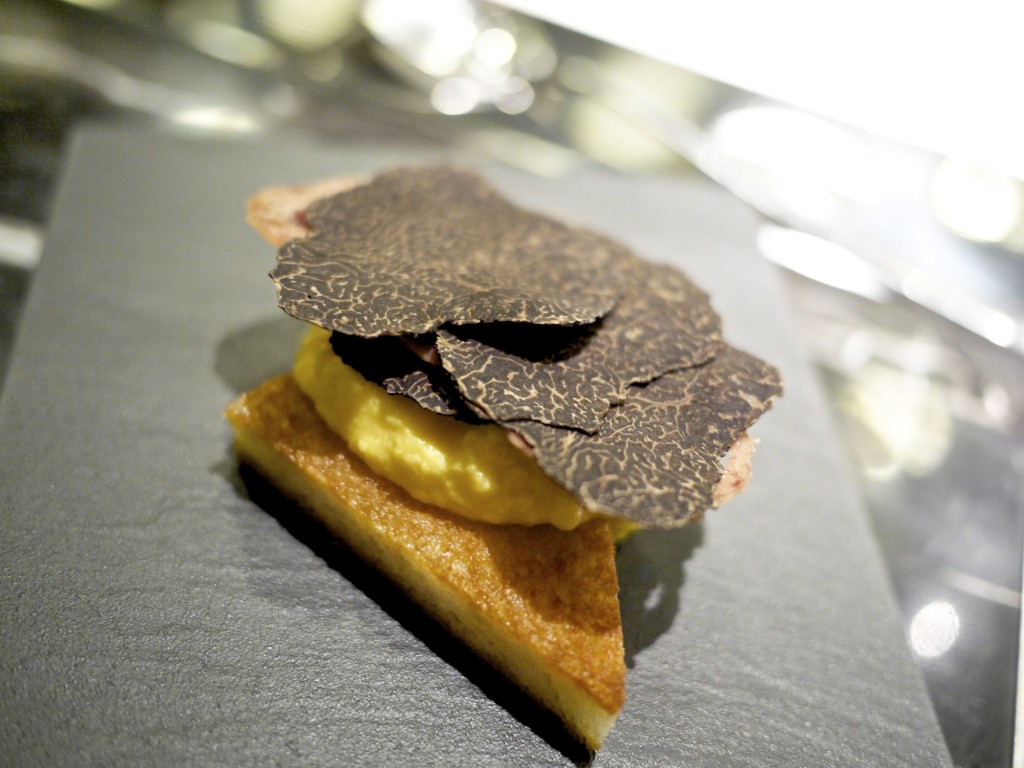 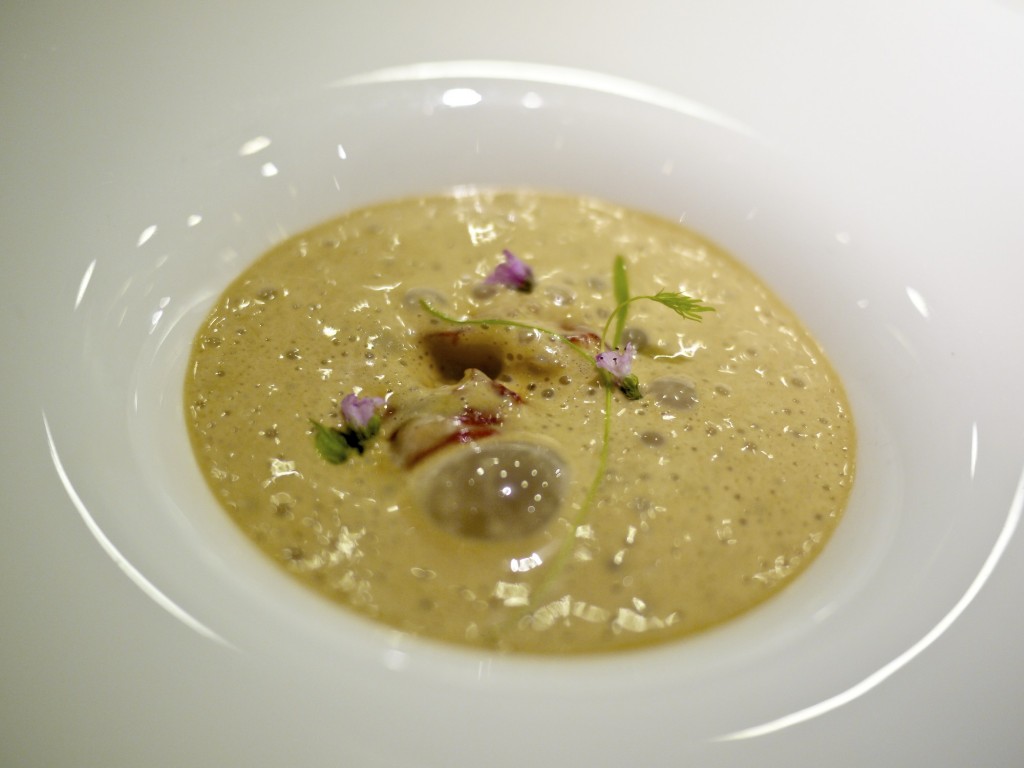 I was much more taken by the next knockout dish, Lobster Sichuan butter poached, peas, sweet corn and chili lobster chips. The juicy Boston lobster had been cooked sous-vide with Sichuan pepper and butter. I loved the moderated spiciness from the Sichuan pepper and the sweetness of the corn and peas, both adding depth and complexity. I’m not good with extremely spicey food like authentic Sichuan cuisine but this had just the right amount of heat for me. 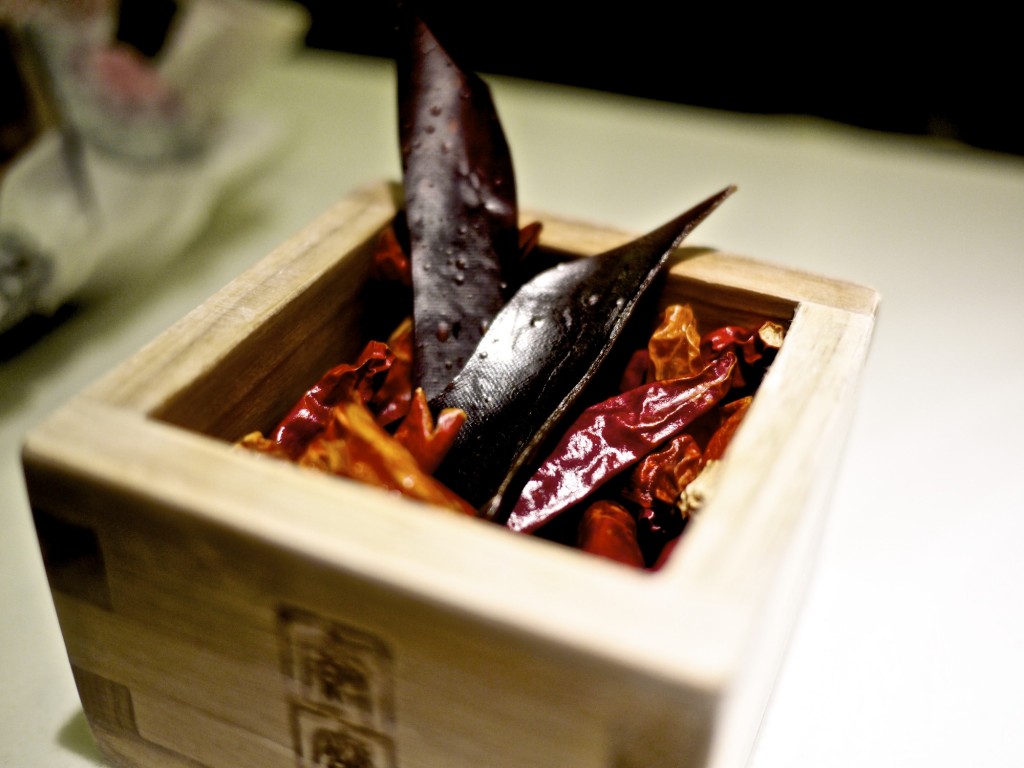 The chili lobster chips reminded me of concentrated lobster bisque. Overall, this was my favourite dish of the evening and this alone was worth the fight against my jetlag during my meal. 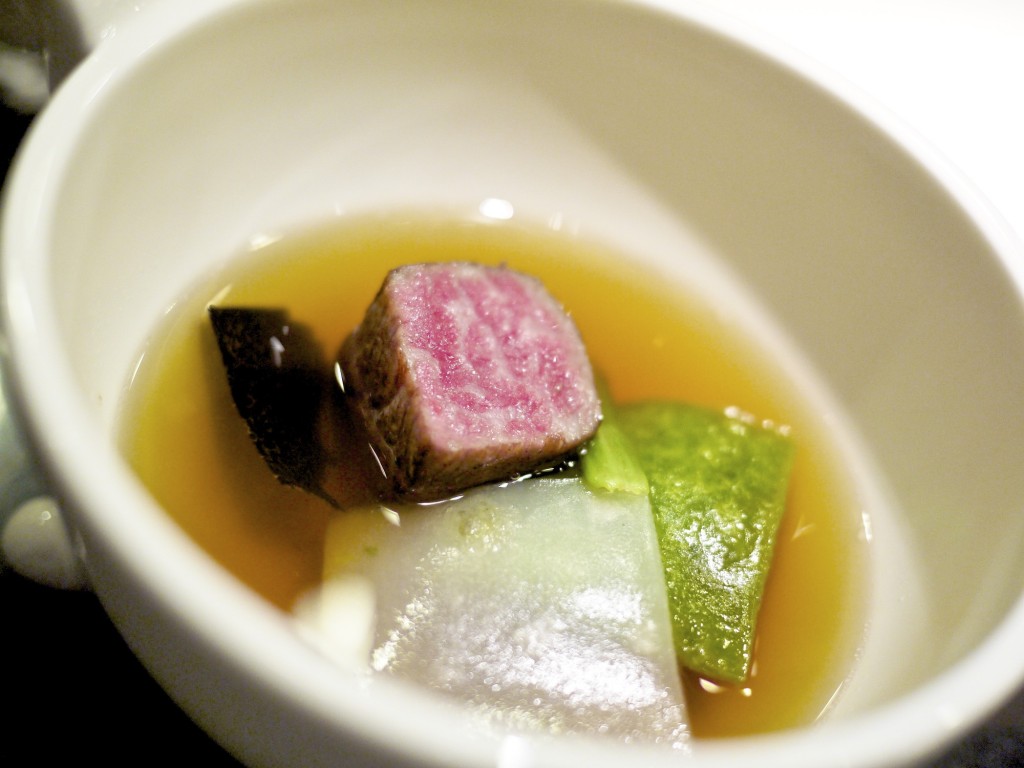 I thought it would be a hard act to follow the lobster dish but I wasn’t let down by Chef Leung on the subsequent meat course. The star component of the Saga-gyu beef, truffled tendon, Chinese chive, daikon and aromatic consommé was however a surprise. The tendon was beautifully infused and cooked with black truffles for three hours, while the white and green noodles on the side turned out to be daikon and Chinese chives, which worked harmoniously with the dish. The texture and flavour of the saga-gyu beef was very good and perhaps the easiest of the components, but it was the deep and rich soup that stole the show. It took 48 hours to prepare this soup, incorporating a good balance of spices including cardamom, bay leaf, aniseed, and cinnamon. This deconstruction of the classic humble Chinese Beef Noodles was the perfect way to end the meal before indulging in dessert. 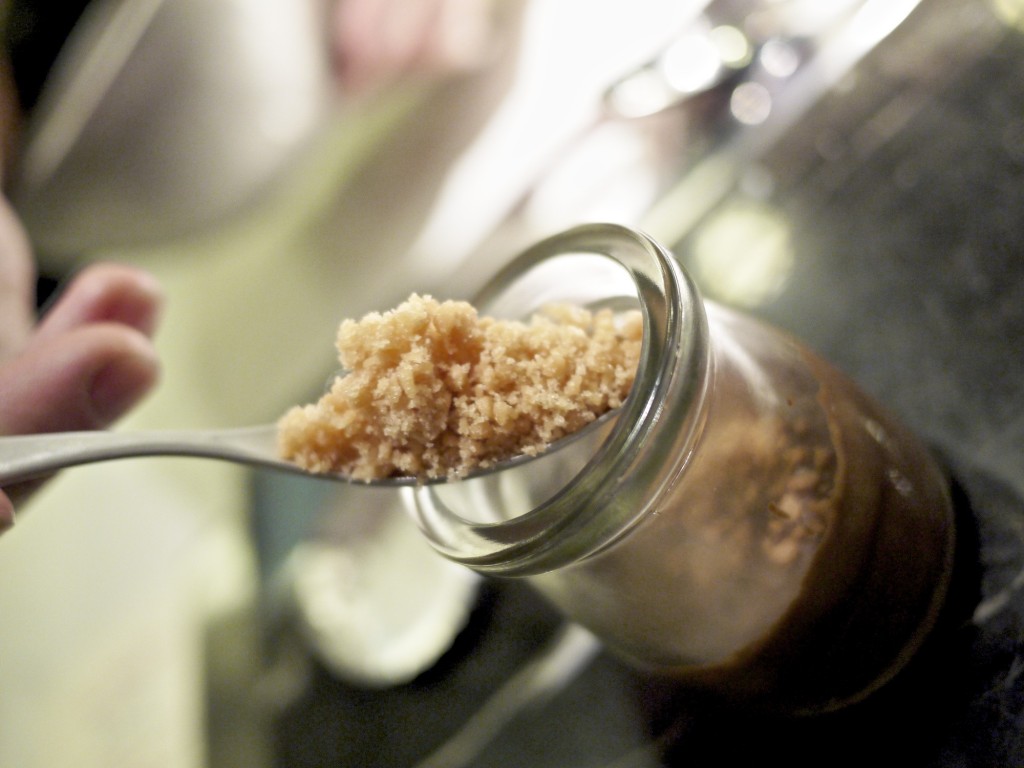 The first of the dessert was the Sandalwood, chocolate and hawthorn. Sandalwood is more commonly used for its fragrance for cosmetic products but in this case its smoke was sealed in a glass tub containing chocolate mousse and dry iced hawthorn. The smoke infused in the chocolate was certainly unique although I wasn’t a particular fan, and I felt the hawthorn was overpowered by the smoke. 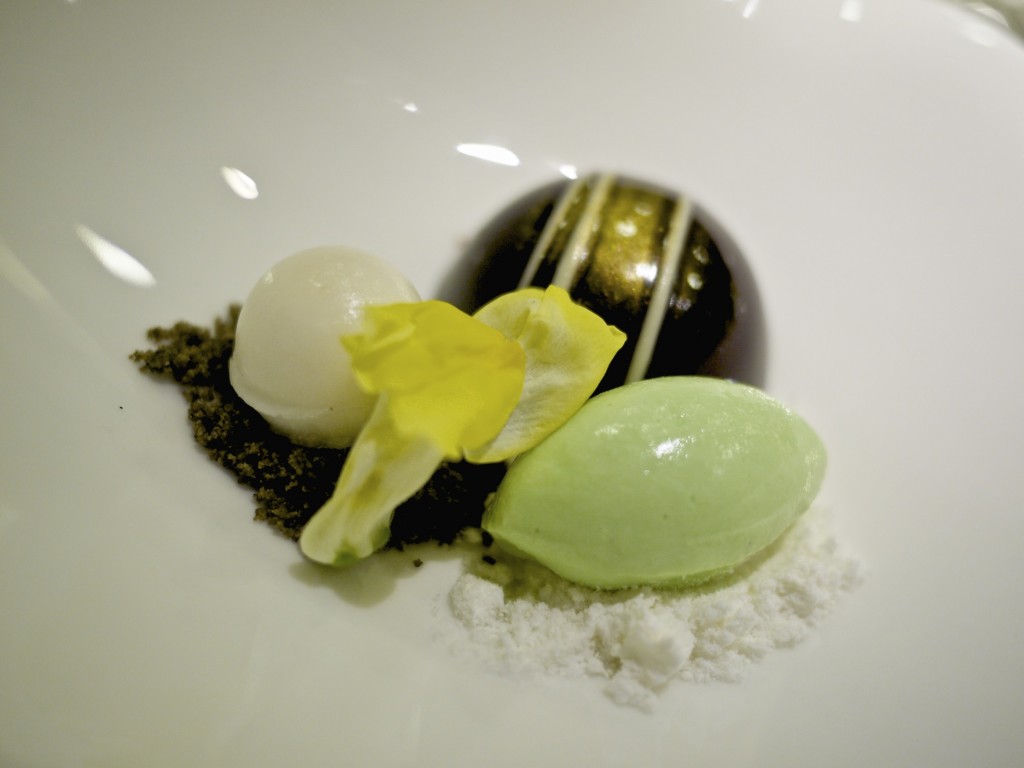 The trio of ‘lung jing’ tea ice cream, ‘shui jing fang’ caramel and lychee rose icicle were unlike other Chinese desserts I had ever tasted and highly original. The ice cream resembled that of macha green tea on a bed of dried white chocolate powder and the caramel had been infused with Chinese spirit that retained a significant sweetness. The icicle exerted a beautiful perfume of rose and lychee flavour, completing the trifecta of flavour, aroma and temperature. This dessert was superb and a great way to finish the meal! 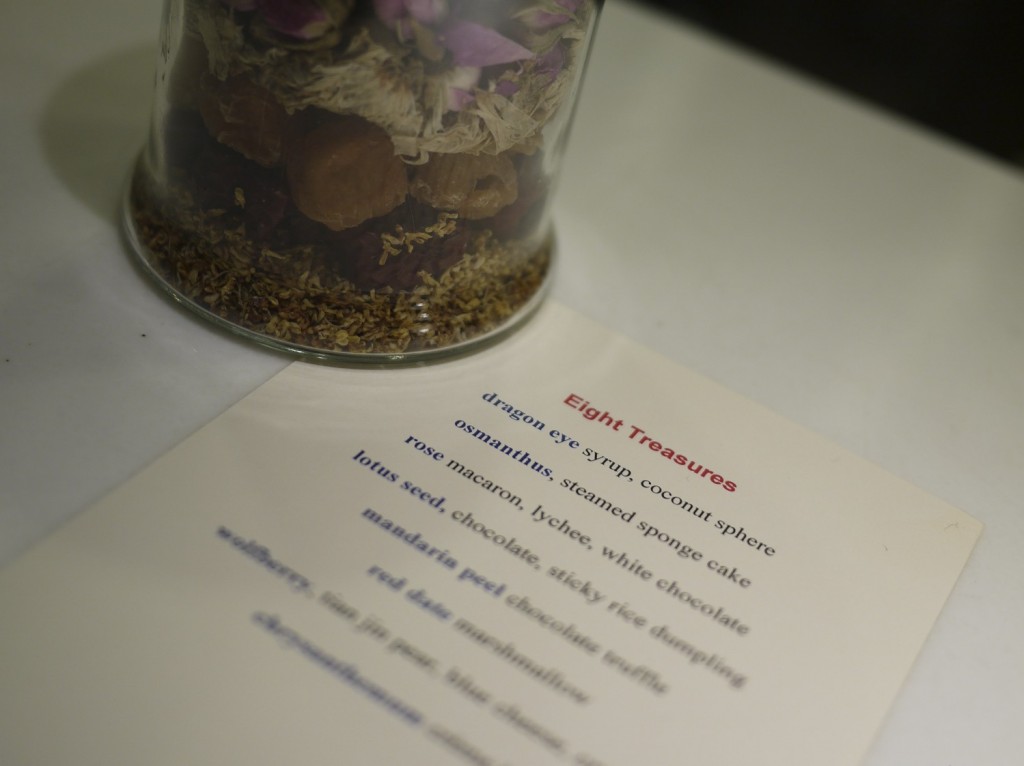 As I nibbled on the petit fours of the eight treasures, I finally succumbed to fatigue. It was quite comforting to end the meal on a familiar sight of miniature delights but with distinct Asian flavours. In particular, I really enjoyed the lotus seed, chocolate and stick rice dumpling and the mandarin peel chocolate truffle. 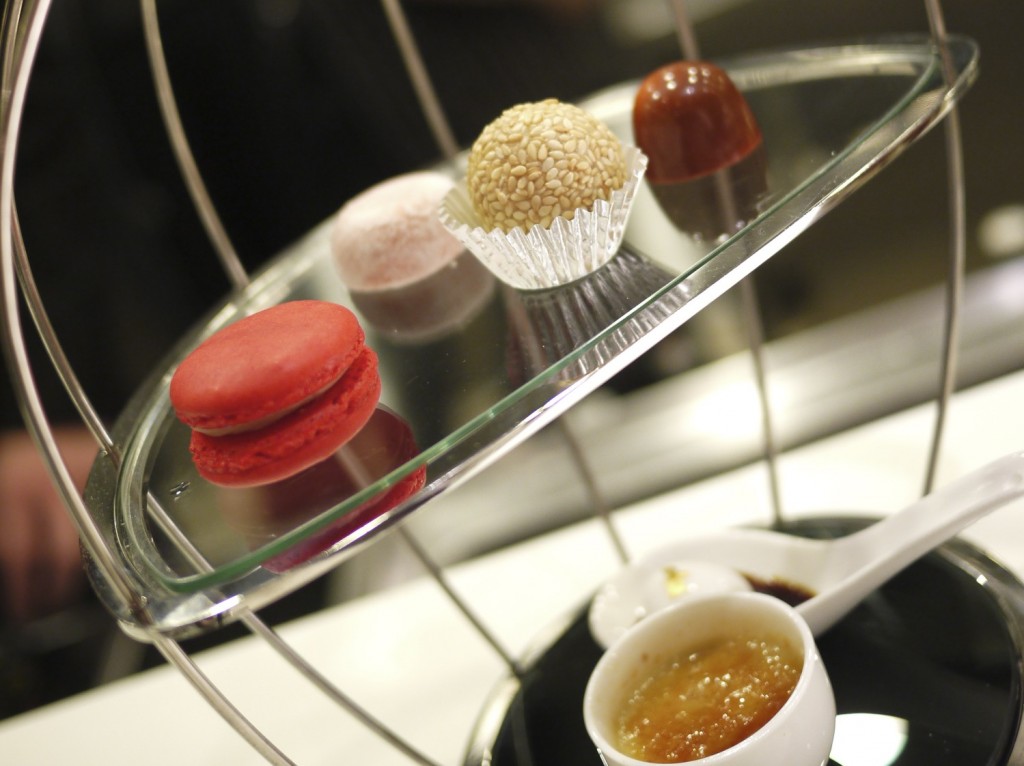 There’s no doubt that the cooking in Bo Innovation was very sound, and I was blown away by most of their dishes. If you took away the Chinese element, the molecular component of the dish was perhaps less dramatic than other places I’ve been to. However, in absence of any gimmicks, the food here is unquestionably serious, real and most importantly delicious. The seamless integration of modern techniques to traditional Chinese dishes using quality seasonal produce has resulted in an unprecedented modern interpretation of Chinese cuisine.

I also couldn’t recommend the Chef’s Table any more highly and I enjoyed the ongoing banter with one of the chef de cuisine, David. I personally found in my journeys across China a lack of interest and discord with the front of house and chefs in fine dining establishments. I was comfortable here dining alone and did not at one point feel either bored or awkward. What Asian cities like Hong Kong need right now are more chefs like Leung and restaurants like Bo Innovation to showcase their diverse cuisine and produce in a much more engaging and personable environment. I look forward to comparing this with the tasting menu in Bo London very soon!