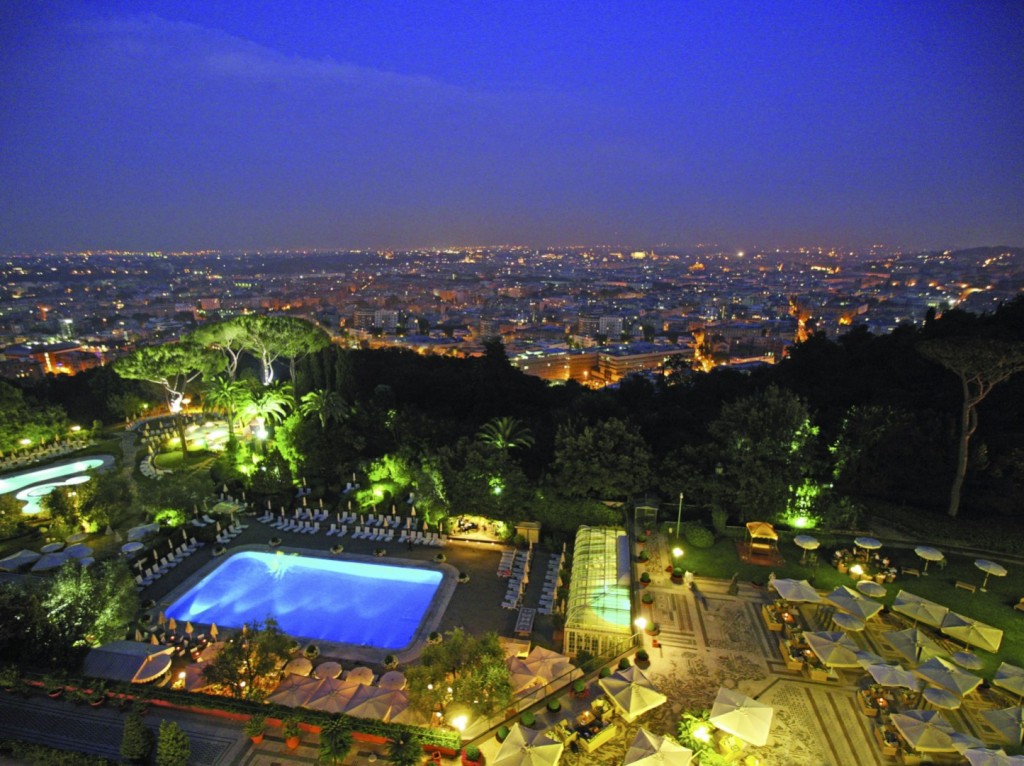 Occupying the top floor of the luxurious art-gallery hotel of Waldorf Astoria, La Pergola is no ordinary restaurant. For one, the interior décor of the restaurant is very bold but elegant. 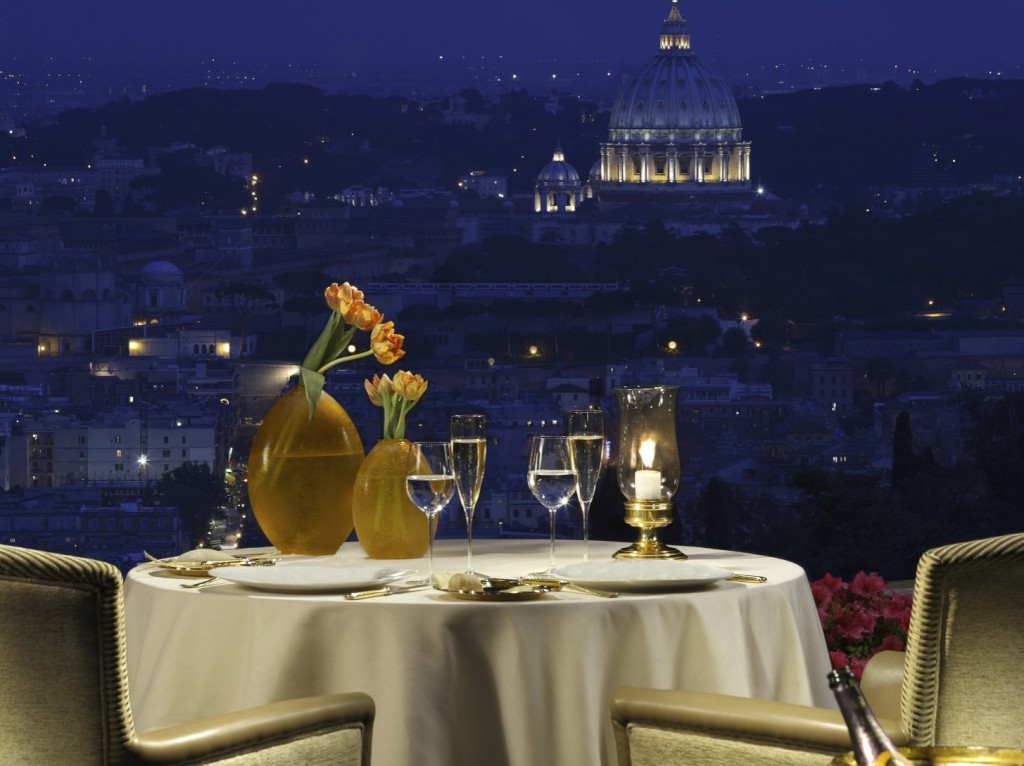 The view over the city of Rome is nothing but mesmerising, with St Peter’s Basilica lit up as your backdrop in the evening. It’s not hard to understand why Beck decided to stay after first arriving in 1994. It was certainly the most spectacular view of Rome that I have ever seen. 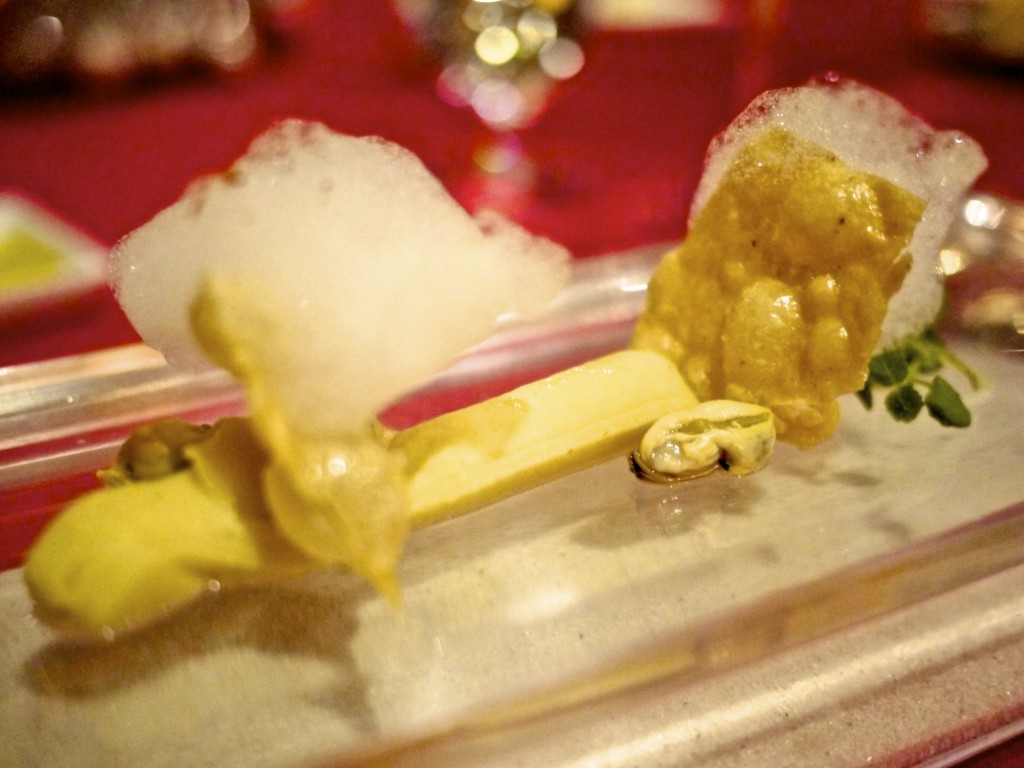 An amuse bouche of Mussels and chickpea puree with pecorino foam. The saltiness and crunchy texture of the parmesan was very appetising and went perfectly with our glass of Dom Perignon 2003. 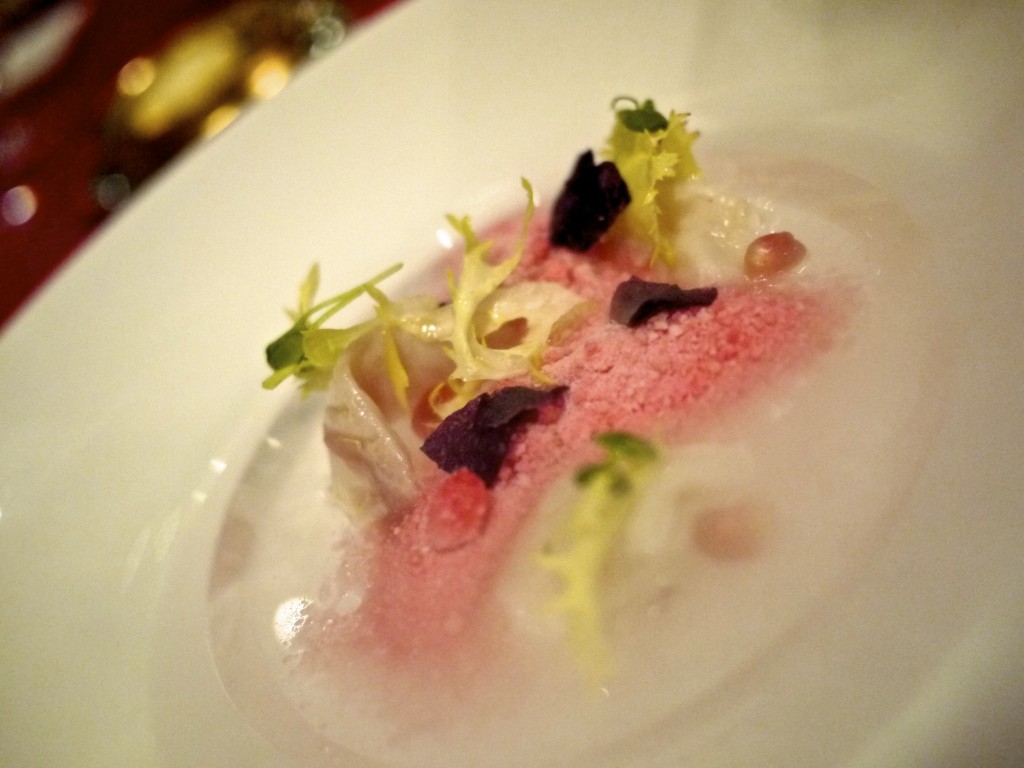 First course of Amberjack marinated in white balsamic vinegar with pomegranate snow. The subtle sweetness of the pomegranate married well with the aromatic amberjack carpaccio, and slight touch of acidity from the balsamic vinegar, overall resulting in a very well balanced dish. I particularly enjoyed the cold component to the dish and the textural contrast created by the crispy violet potato garnish. Accompanying wine was a Planeta Caricante 2010, a mineral driven acidic wine that was refreshing. 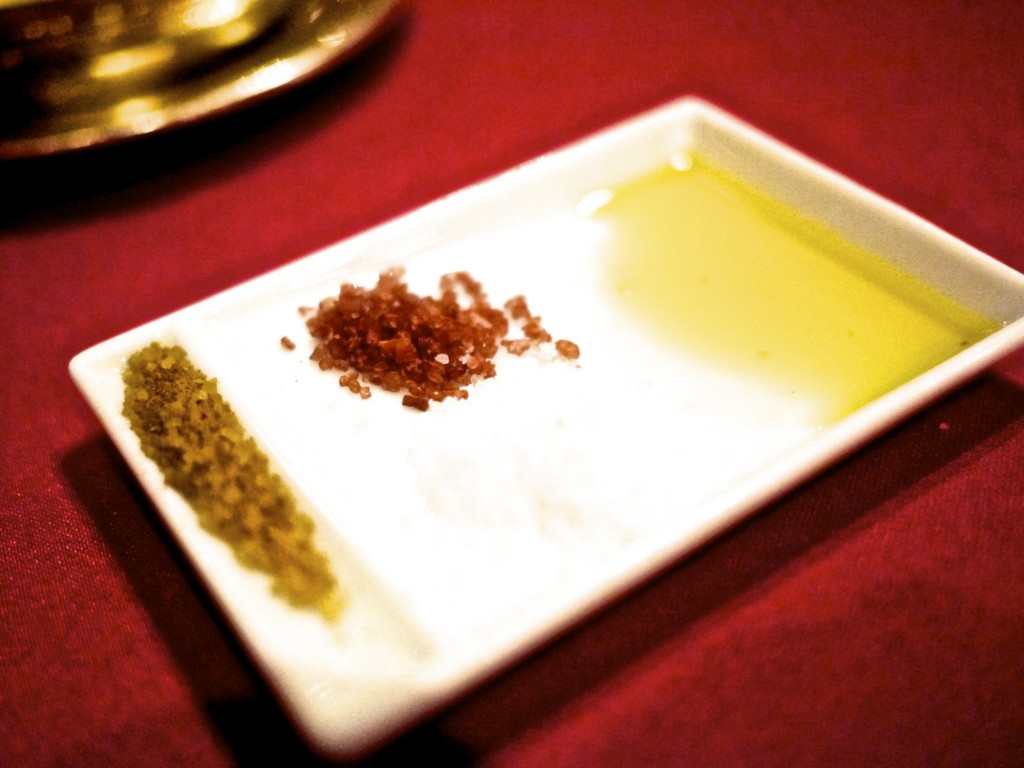 A plate with three different types of sea salts. The yellow Norwegian salt was by far my favourite with a distinct smoky flavour. In contrast, the pinkish-brown volcanic Alaea salt from Hawaii was much more mellow in flavour whereas the white Italian salt from Trapani was rich in minerals. It was delightful to soak our bread in the light Trentino olive oil before dipping into the salt, allowing us to compare and contrast the dramatically varying flavours. 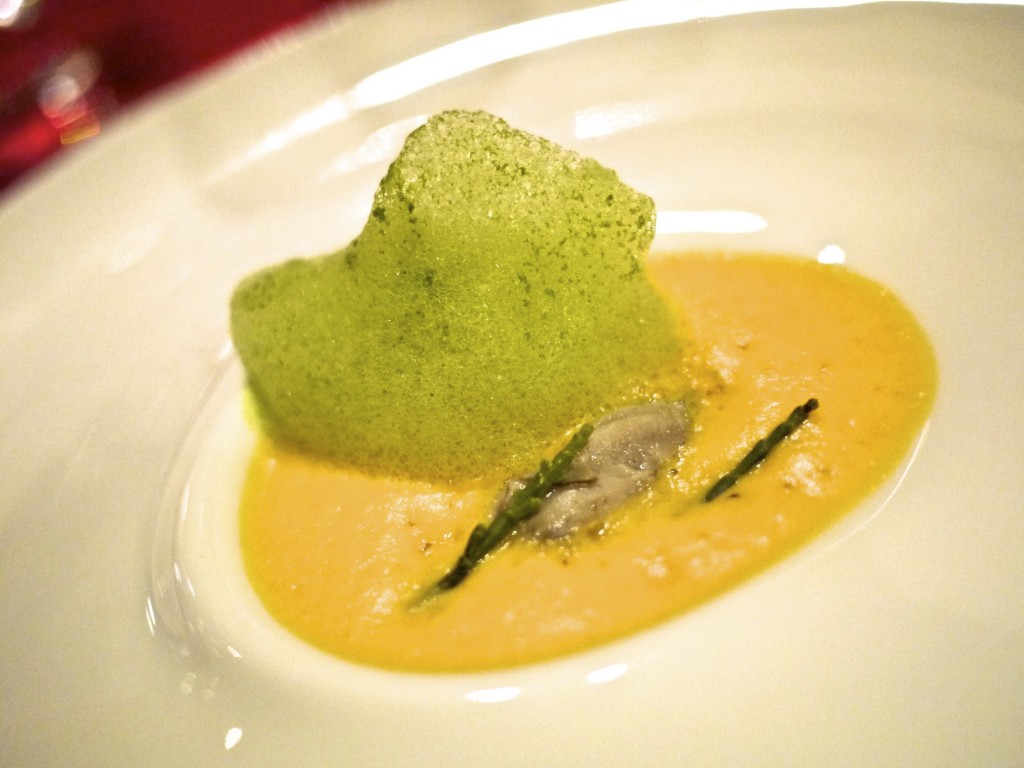 His Grilled “La Perle Blanche” oyster on pumpkin cream with parsley puff was a much heartier dish. Despite my initial reservation over the parsley “foam”(as many chef’s have tendencies to add them for aesthetic reasons only) I must admit, that in this case, it added a lovely fragrance and freshness to the sweet and smoky pumpkin soup. I particularly enjoyed the natural seasoning from the grilled oyster, bringing all the components of the dish together in harmony. 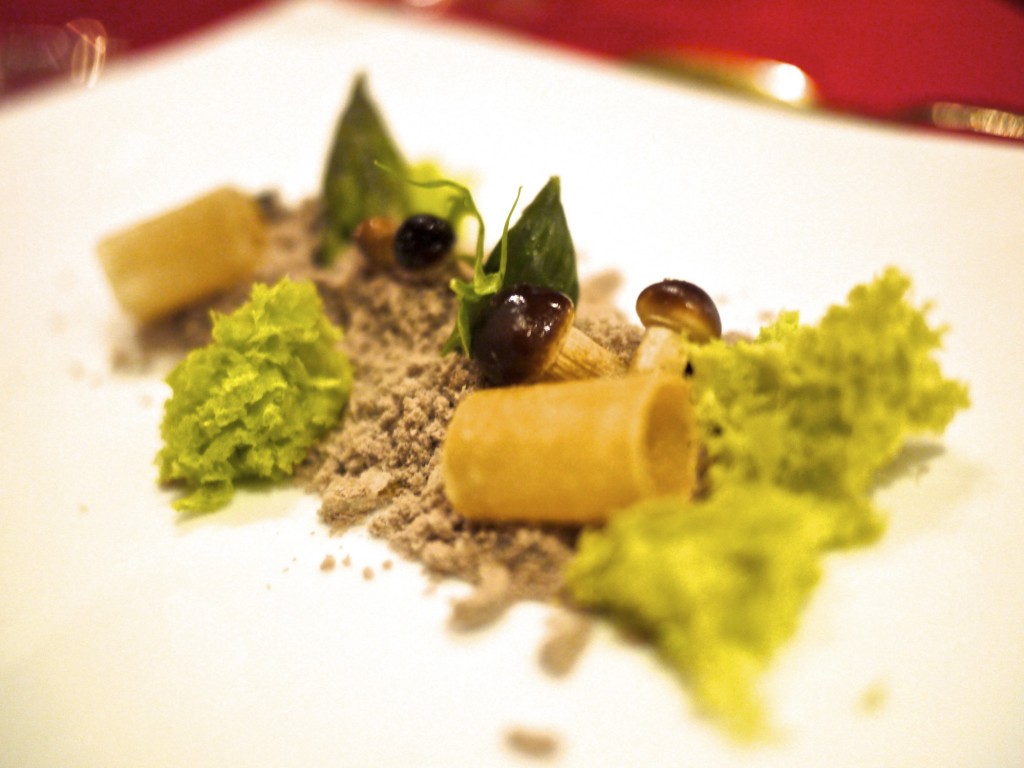 The Earth flavours consisting of a lovely canvass of mushroom powder, meat mushroom and cream of sweet foie gras. The parsley chlorophyll sponge and asparagus refreshingly lifted the dish, and the crunchy and wafer thing bread was critical in adding texture to what would have been a one dimensional dish. The glass of Marisa Cuomo Fiorduva 2010 revealed a hint of jasmine, orange blossoms, ripe apricots, a hint of fig and subtle toasted oak in a layered, with a smooth finish. 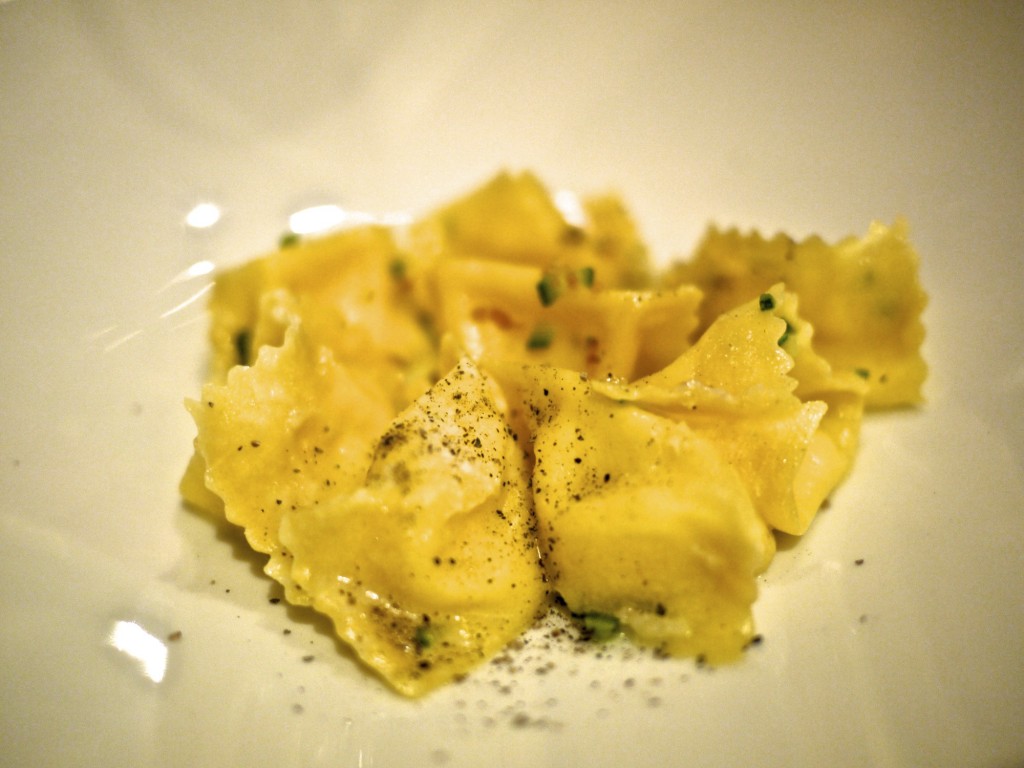 The highlight of the meal, and that which was responsible for leading me here in the first place, undoubtedly was Beck’s signature dish, Fagotelli “La Pergola”. The visual simplicity of this dish was deceptive as the skills required for perfecting the remarkably thin and light parcels of pasta containing carbonara sauce, garnished with specks of crunchy bacon and zucchini, was truly remarkable. I was impressed with Beck’s ability to refine a traditional Roman dish and transform the humble pasta into a sophisticated dish, worthy of a place in a fine dining restaurant. 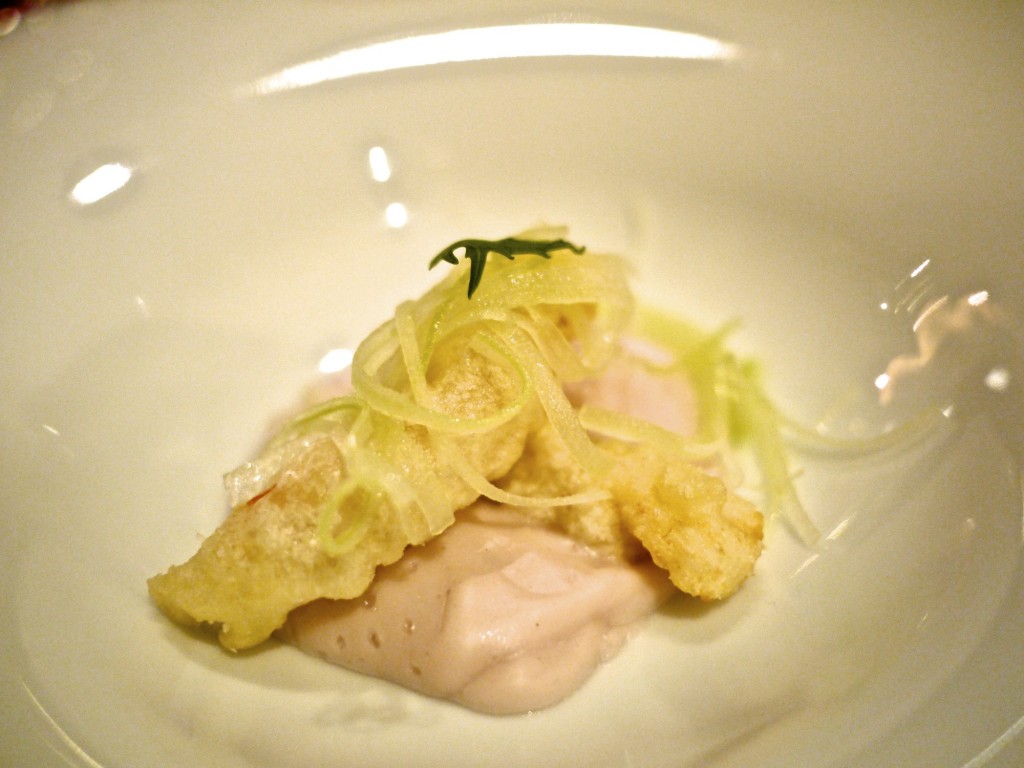 It was difficult to follow the previous dish and I must admit I found the King prawns in tempura on puree of fried squids a little sweet for my liking. However, the celery did add some sharpness to this rich dish and the deep flavour of the fish and squid consomme cream was enjoyable. 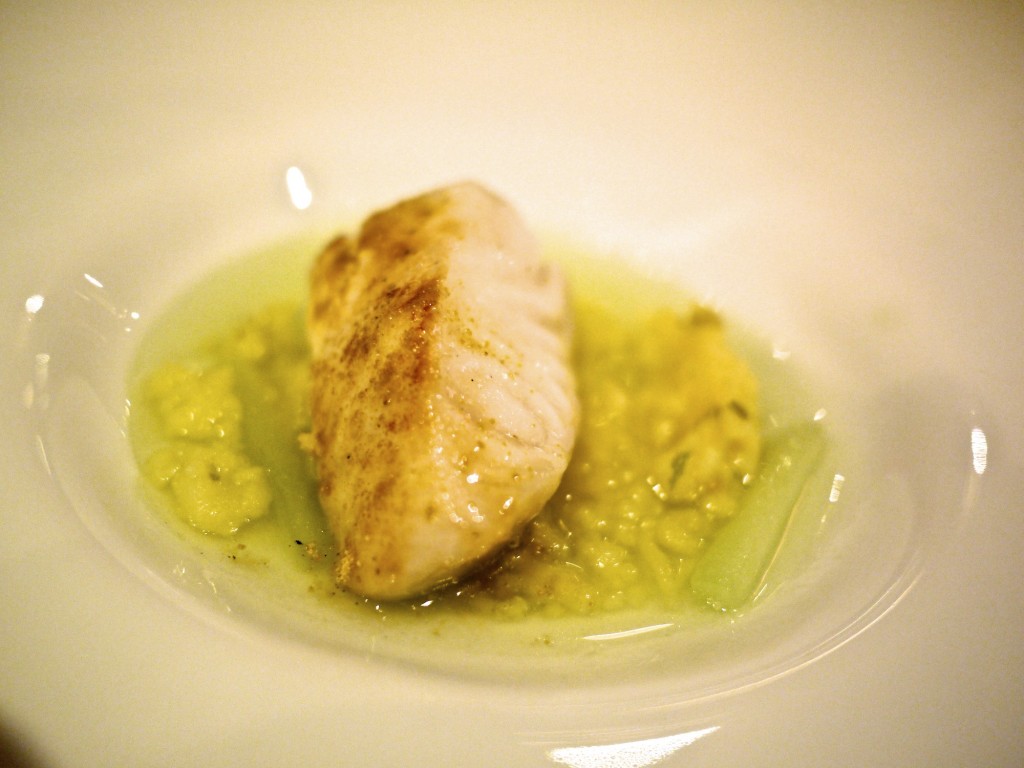 The Black cod with celery sauce and curry crust was the most aromatic fish course I’ve ever had. The delicate cod with perfectly seasoned potatoes had a lovely hint of lime and verbena but interestingly took the fishiness of the fish away, and the sweetness of the celery balanced the dish. Superb! 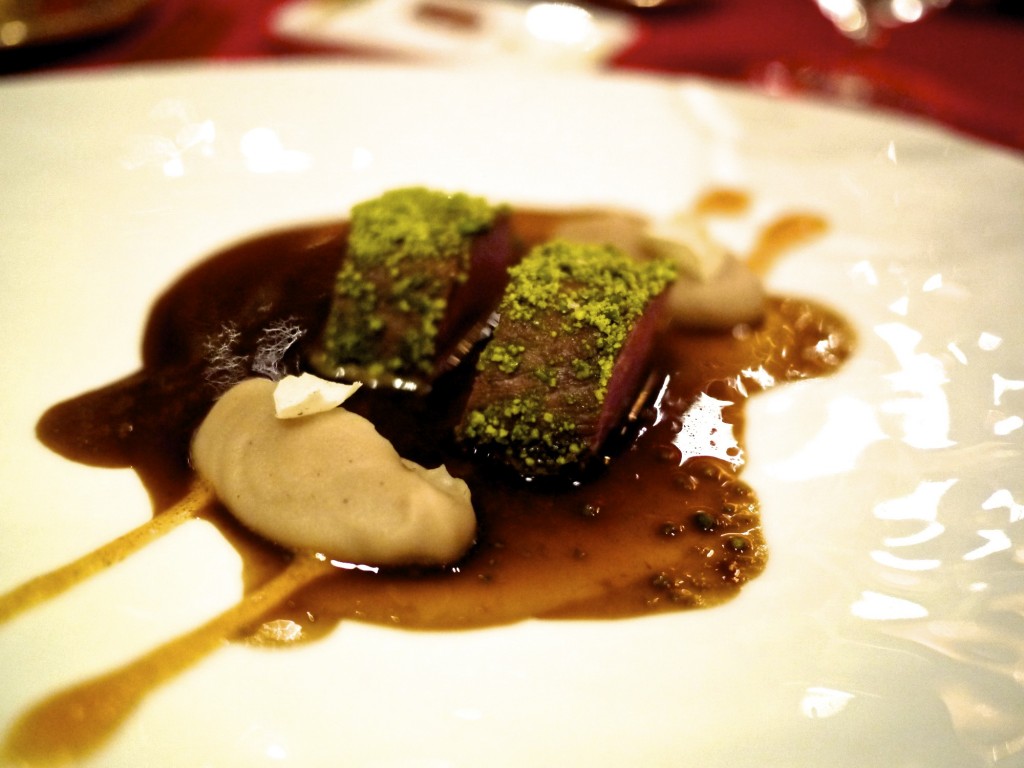 The Venison in pistachio crust with chestnut puree and persimmon jam was a welcomed progression to a richer dish. The venison was cooked perfectly pink and the chestnut puree added a smoky and earthy flavour to the sweet pistachio, topped off with a thick jus. You could just about pick up the sweetness from the persimmon jam although it was possibly too delicate a component to this rich dish. The woodsmoke chocolate note from the Rivera Il Falcone 2007 was a perfect marriage. 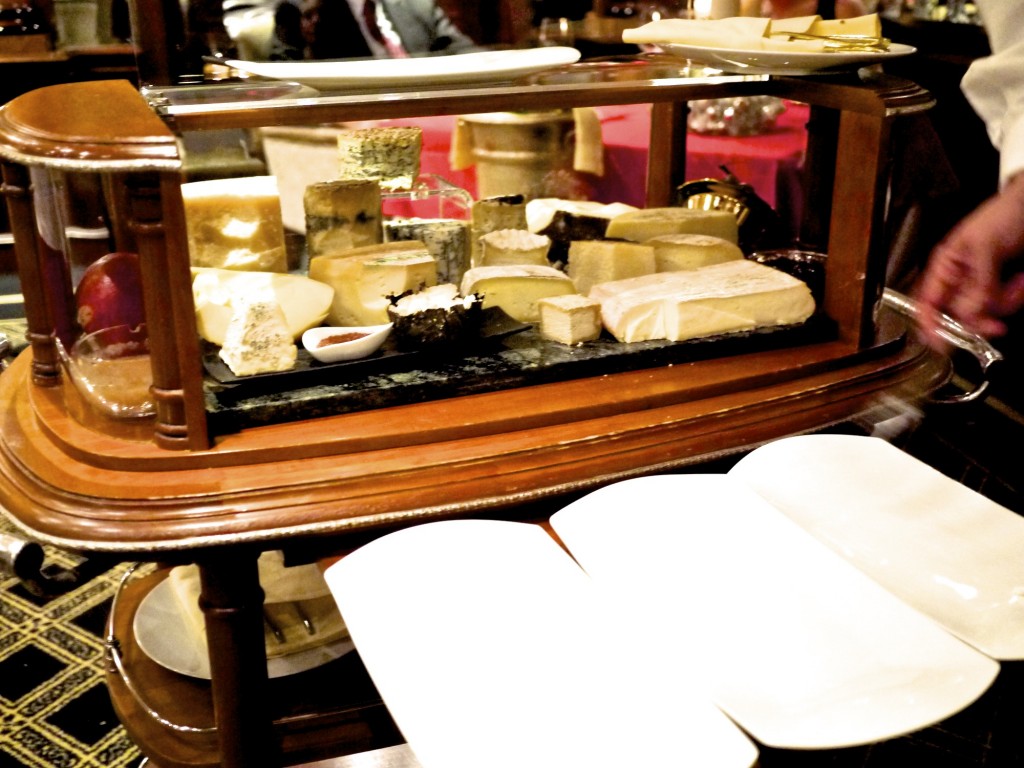 Of course we couldn’t say no to the cheese trolley! Of particular interest was the Bitto cheese from Lombardy that was produced from whole cow milk produced only in the summer months and aged for over 10 years. It was definitely something different and resembled closest to a very matured parmesan. 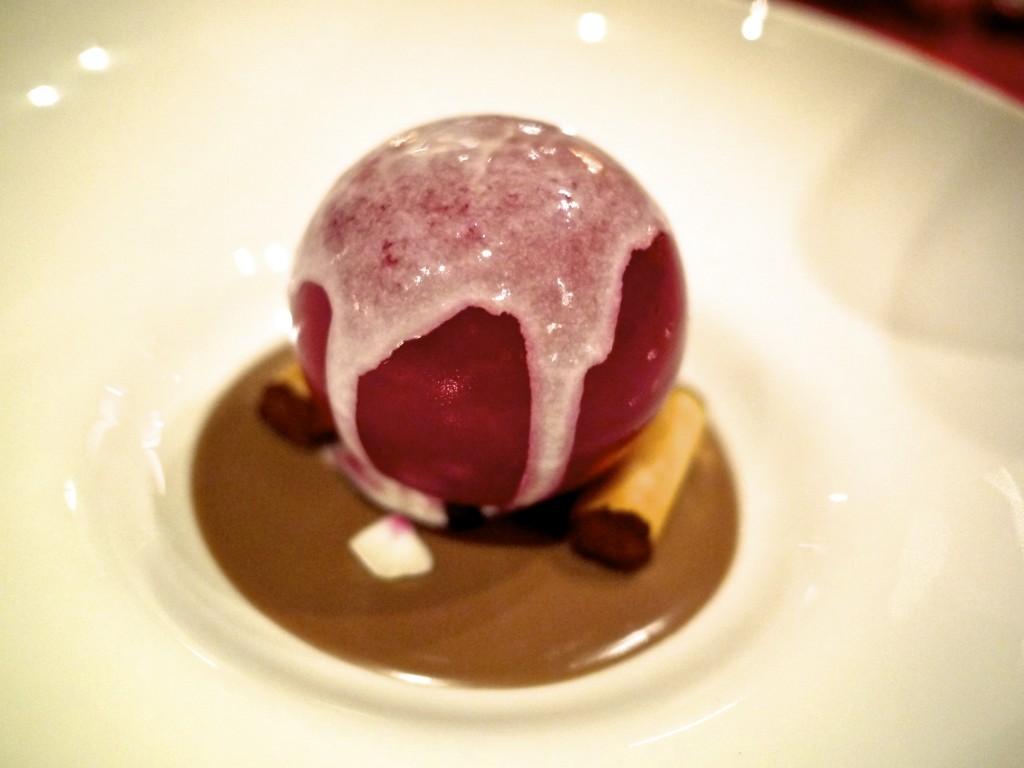 After a quick napkin change we were served with one of the most memorable dessert from 2012. The Iced sphere of pomegranate on gianduia cream and cannelloni filled with salty pine-seed Chantillywas the best surprise of the night! I thought I had misheard pomegranate for cherry because the depth of sweetness from the sorbet sphere did not resemble that of any pomegranate I knew. Beck later explained that the sweet juice was extracted by delicately squeezing only the outer flesh of each seed, resulting in a concentrated sweet flavour similar but superior to that of cherry in season. It was a superb finish to a memorable meal. 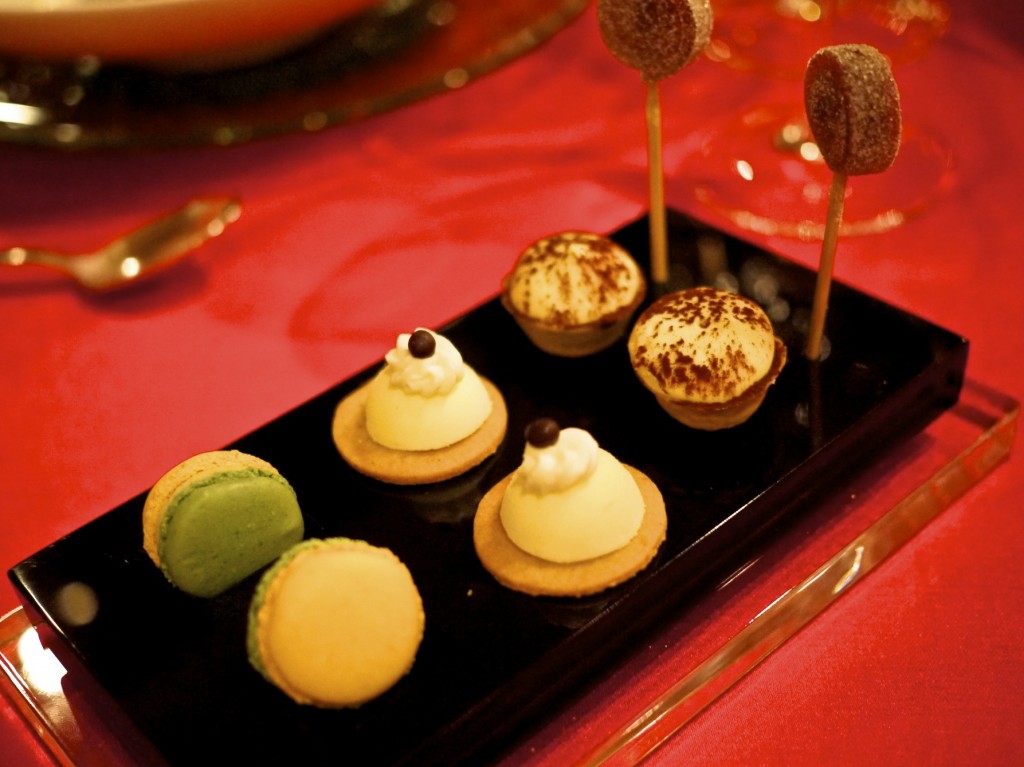 Obviously we thought it would be rude to turn down the lemon and lime macaron, lemon mousse on short biscuit with crunchy chocolate drop, Tiramisu cupcake and raspberry jam as they looked so pretty. The flavours yet again were clean and fresh, and we could have easily managed another round. 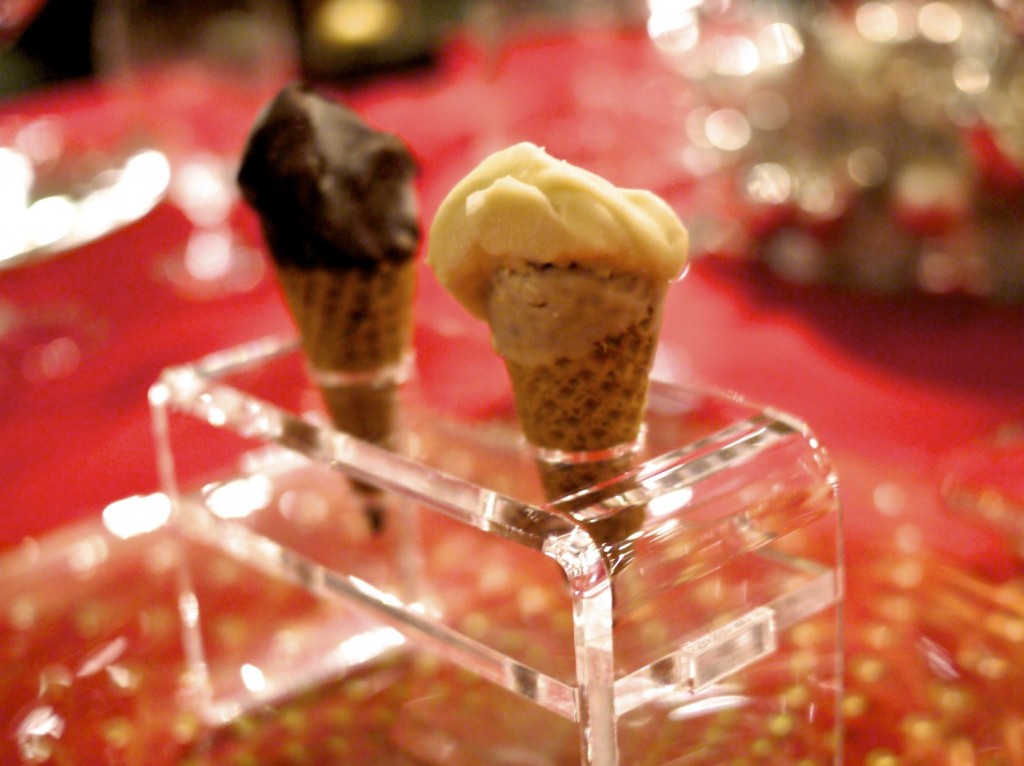 Luckily for us there was a final treat of hazelnut & mango ice cream to go with our espressos before partaking in the Cuban delights in their designated cigar tasting room! 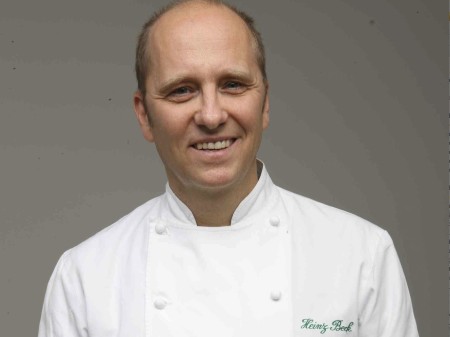 I never thought that classic Italian dishes like a plate of pasta could be elevated to such a sophisticated level. Achieving such feat is no ordinary matter and we could easily overlook the tremendous amount of determination, skills and hard work that went into refining every dish. I also appreciated Beck’s extra attention to detail to his dishes, ensuring his diners have a light and healthy meal whilst delivering high notes on the all-important flavours.

One thought on “La Pergola, Rome”