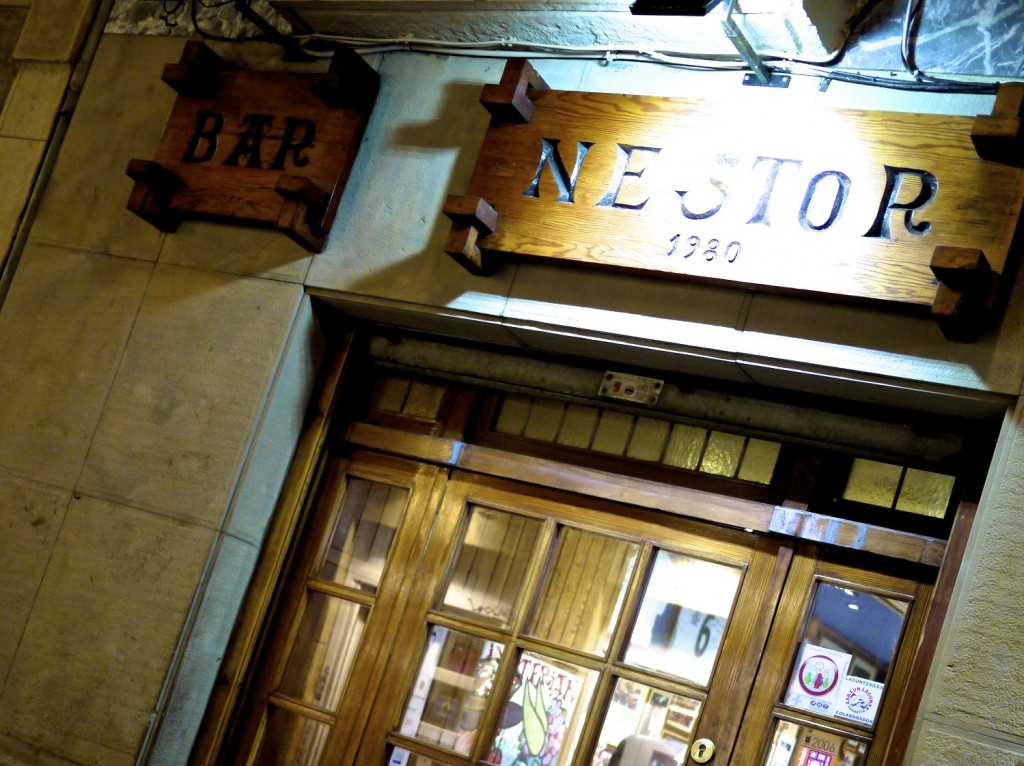 The city of San Sebastian is synonymous with fine dining where one is spoilt for choice from various Michelin starred restaurants including Spain’s first 3-Michelin starred Arzak. Whilst fine dining was on our agenda, we surely could not leave this city without sampling some of the best pintxos that made the city famous in the first place. After weeks of researching into the casual dining scene, we came up with a pintxo route that allowed us to sample the specialities from various taverns.

The Spanish are notorious for dining late but there is one tavern in San Sebastian which everyone has to arrive early in order to avoid disappointment. 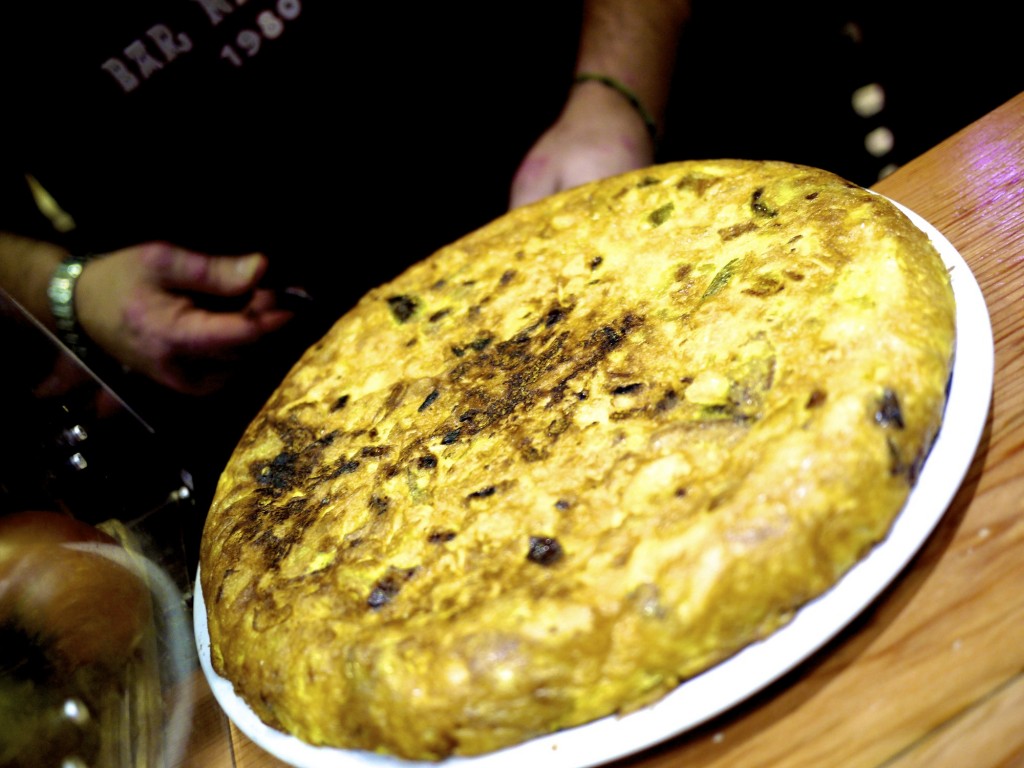 The tavern of Nestor on Calle Pescaderia, 11 serves the most amazing tortilla and tomato salad. Only a couple of tortilla’s are made every day at 1pm and 8pm, and we were lucky to have just made it in time to snap up the last three portions amongst four of us. 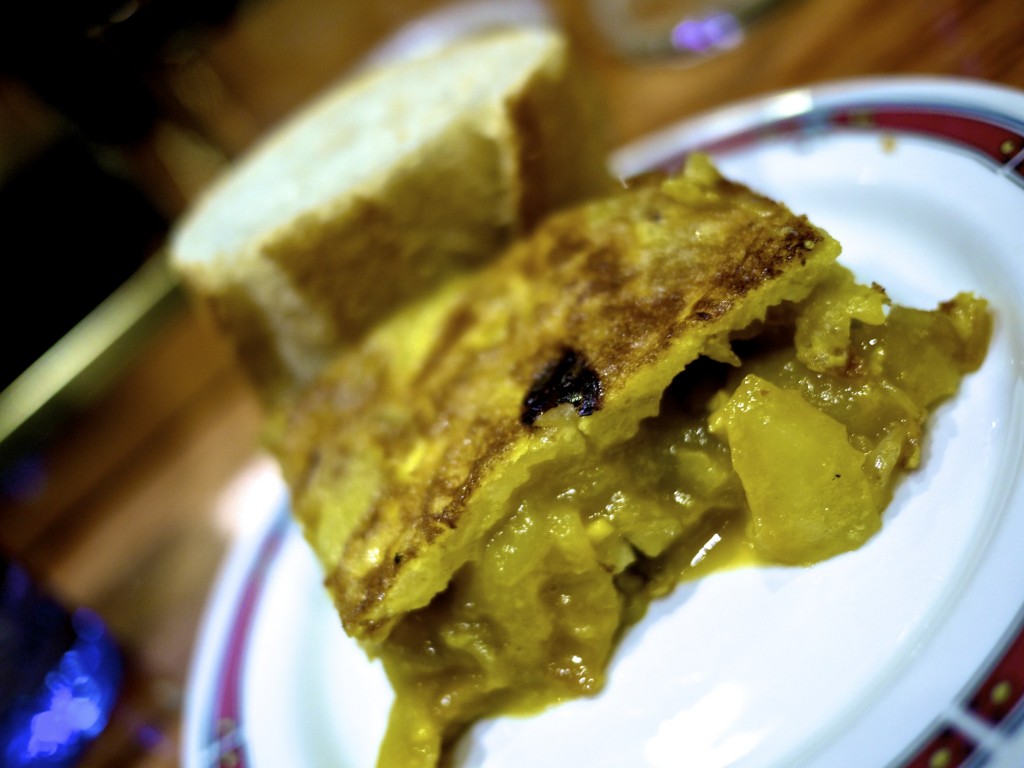 I’ve had my fair share of tortilla’s but this one was just superb. It was creamy, the seasoning was perfect and the layers of potatoes still held its shape and texture inside. The difference here was the caramelised onions which added depth to the flavour with it’s sweetness. What a great start to the evening! 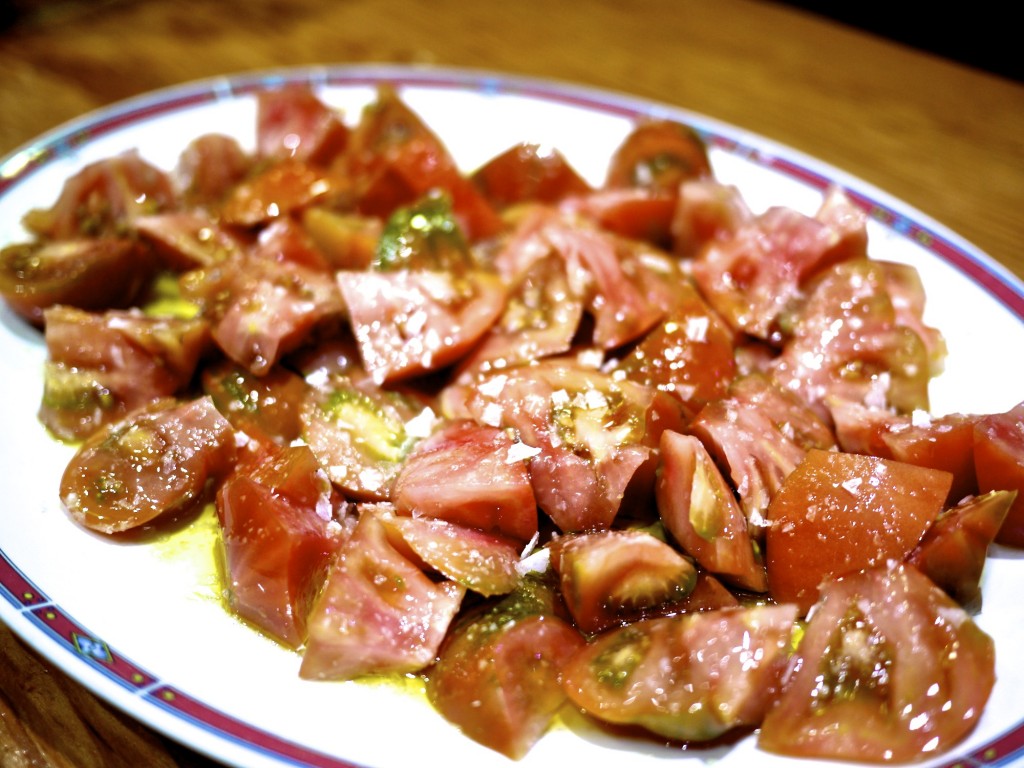 Their tomato salad with olive oil and Maldon salt was so simple yet a perfect accompaniment to the tortilla. The tomatoes were so fresh and full of flavour, and the olive oil had none of the bitter aftertaste. Naturally, we were soon mopping the plate up with bread. 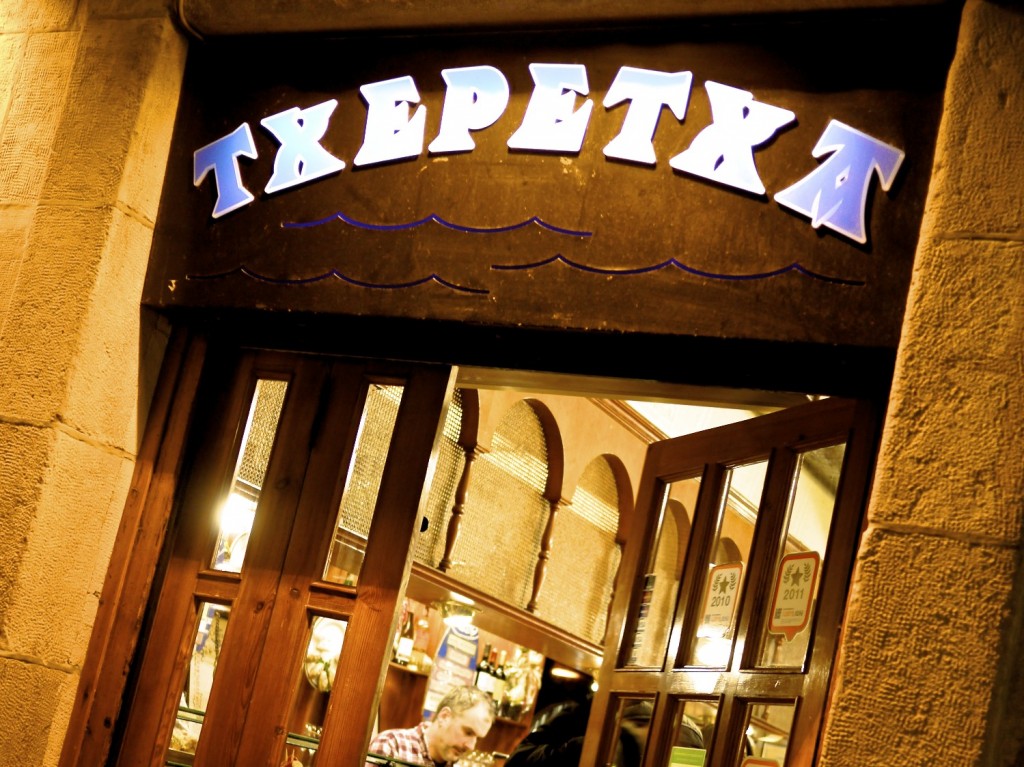 Our next stop, Txepetxa, is located on Calle Pescaderia 5, which is literally a few metres away. This place is all about the anchovy pintxos; to be precise there were more than ten dishes. I was curious to compare them to the famous ones from my mother’s town of L’Escala and they did not disappoint. 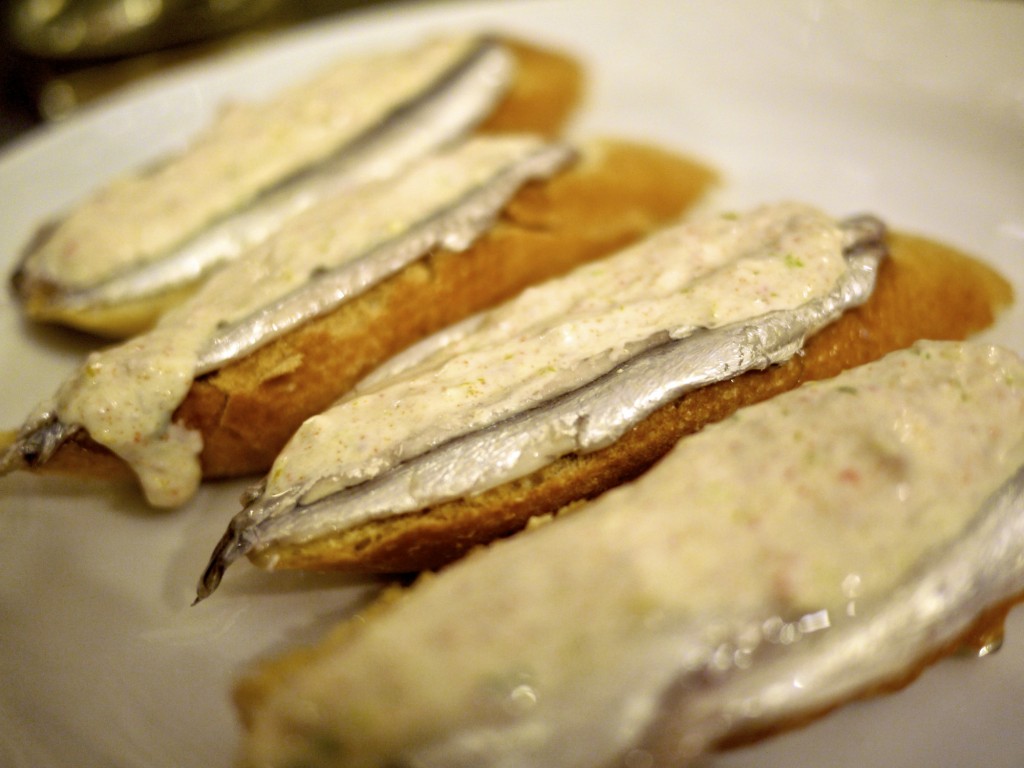 As we had a few places to visit this evening, we didn’t quite want to get full so early. We therefore decided to go for their famous anchovies with majid crab sauce, served on bread. The flavour of the anchovies that had been cured in vinegar really stood out and it was surprisingly unsalty. The crab sauce was so fresh and the slight seasoning from the anchovy brought the flavour out. This was definitely one of the highlight of the evening! 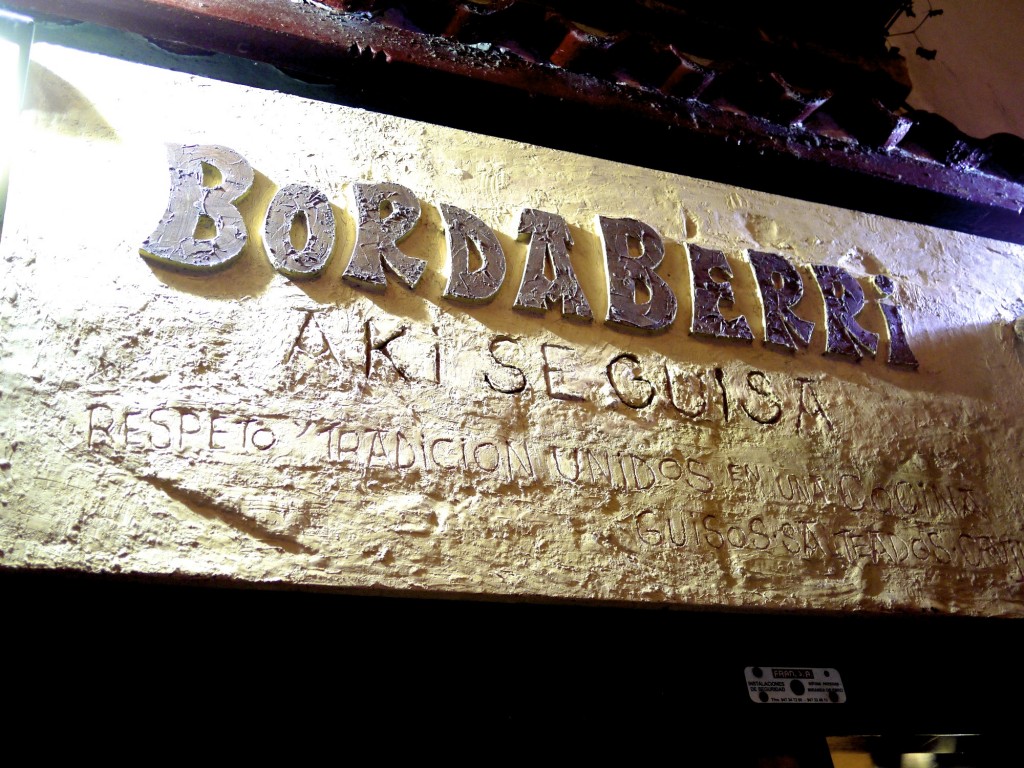 On to Borda Berri at Fermin Calbeton 12 where I was told we would find the best meat course of the evening. 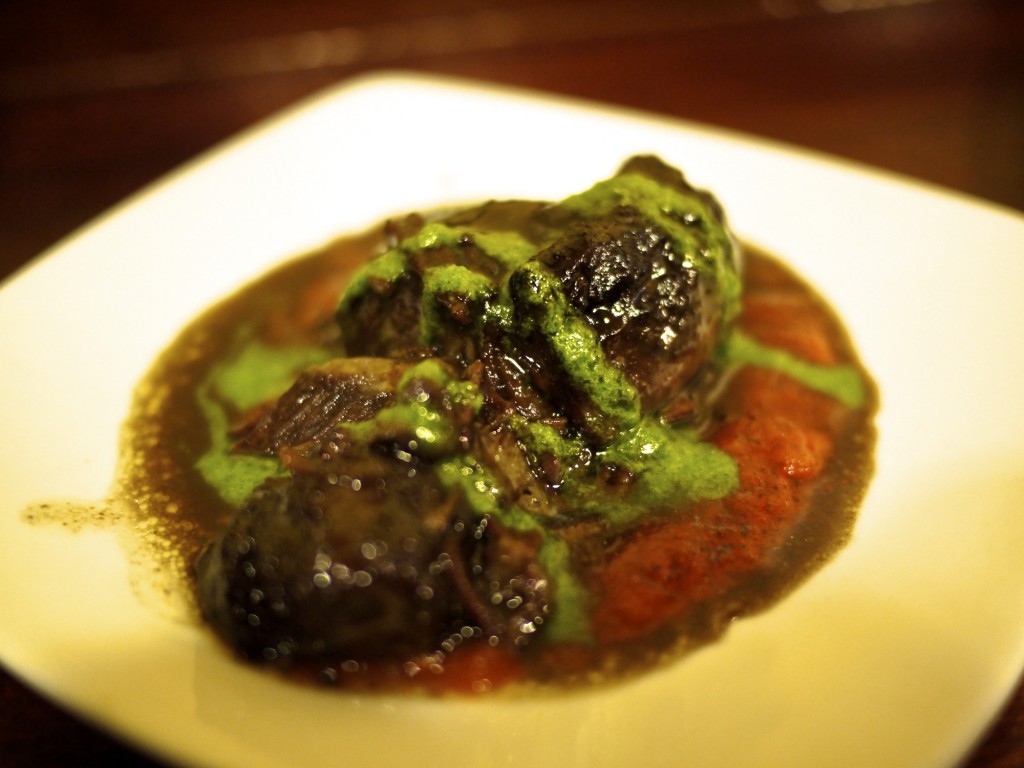 The veal cheek certainly was rich and soft in texture but I was rather disappointed to find it over seasoned. A glass of beer washed it down really well but this certainly was not as good as the one I had tried in Mas Pou in the province of Girona. 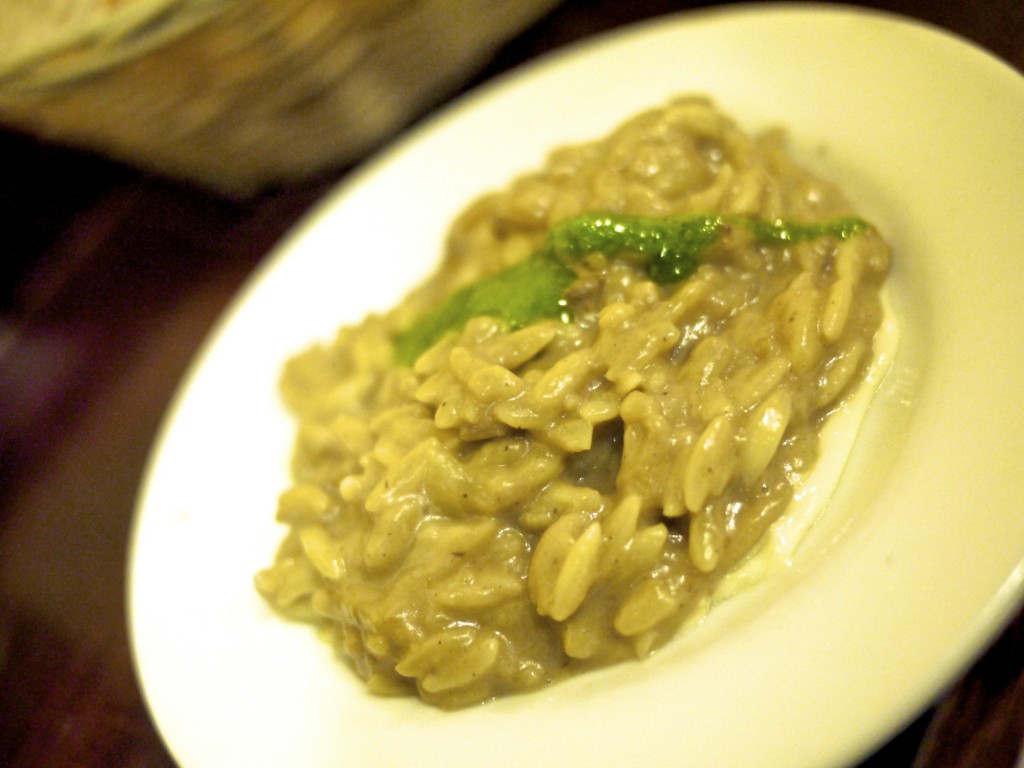 The mushroom risotto was much better. Similar to the cheeks, it was cooked perfectly with a bit of bite. The mushroom flavour really came through and I had no issue mopping this up. 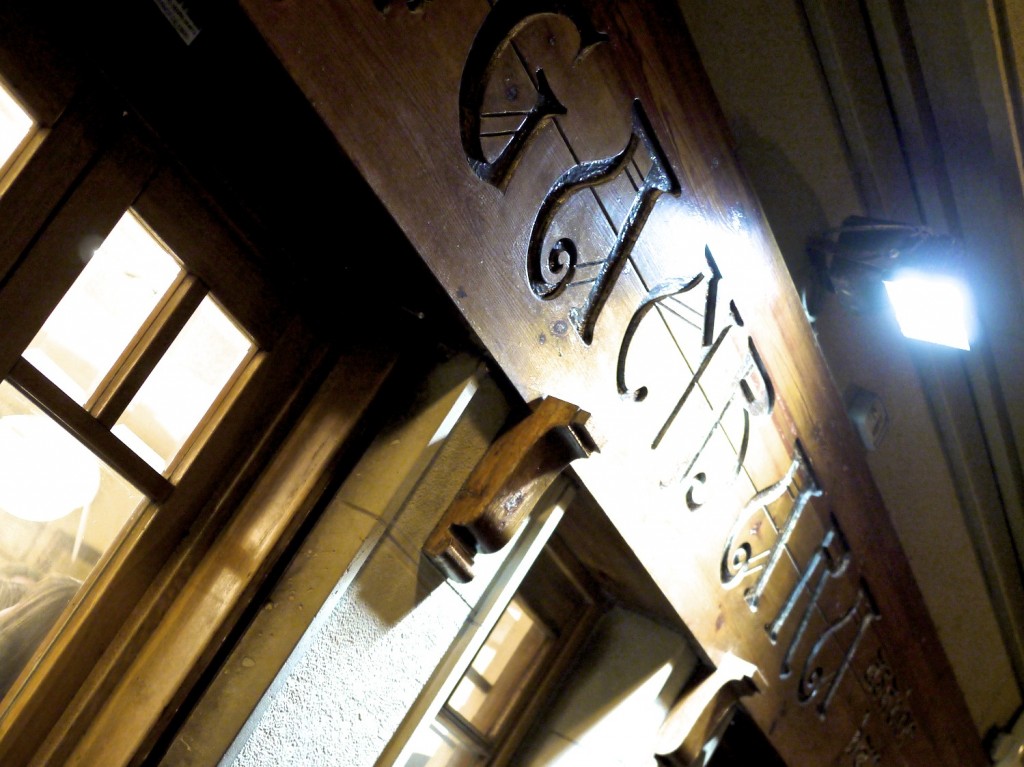 After a somewhat mixed feeling, we headed over a few streets down to Ganbara on San Jeronimo Kalea, 19 to try their famous mushroom pintxos but we were unlucky to find out there wasn’t much left and the place was completely heaving! 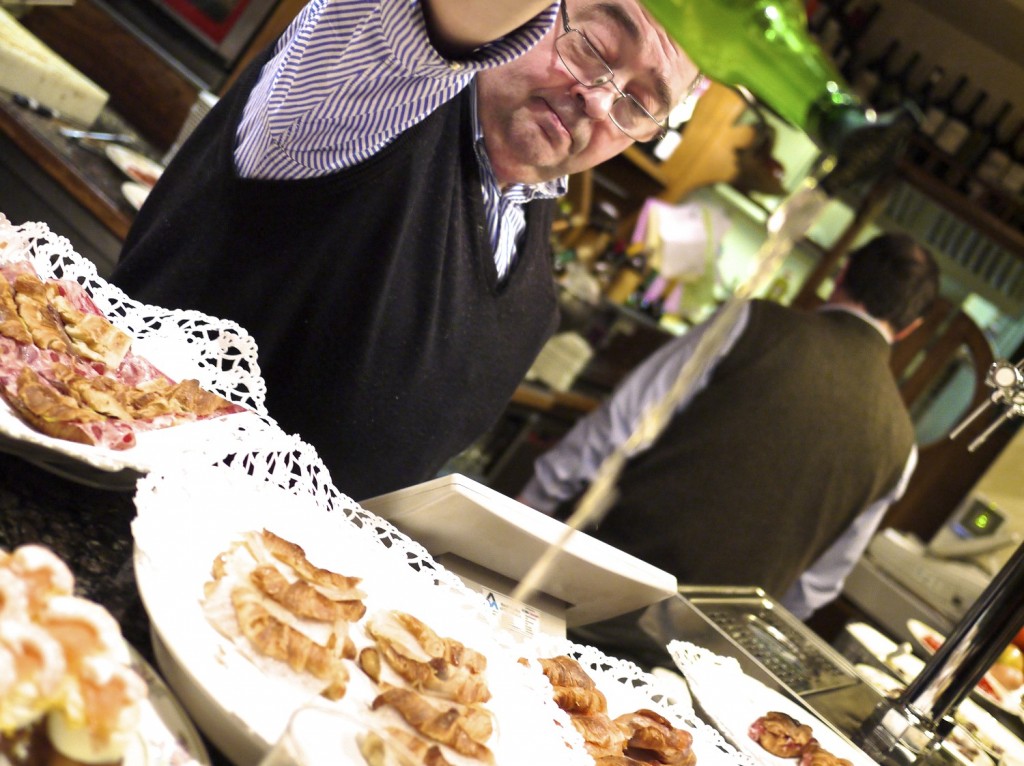 I was still feeling quite thirsty from the cheeks so immediately ordered a bottle of local cidre before deciding on what to eat. 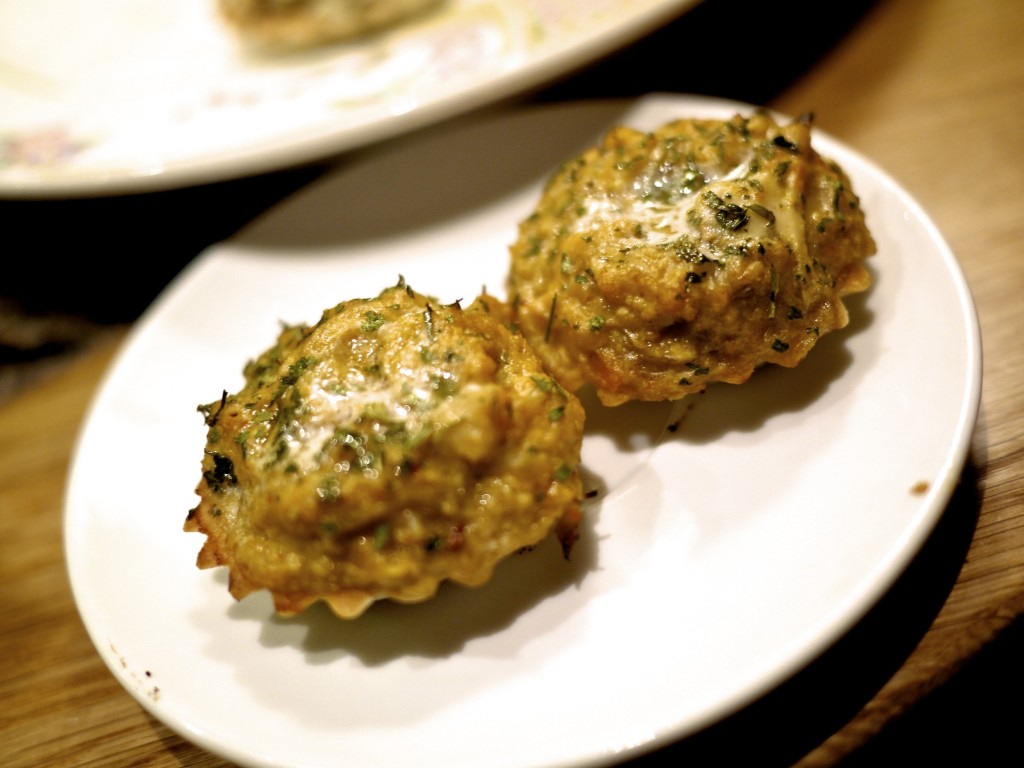 After much deliberation, we made the right choice by opting for the sea crab tartlet which was warm and full of flavour. The size was perfect for one bite as it was oozing out of the crust. 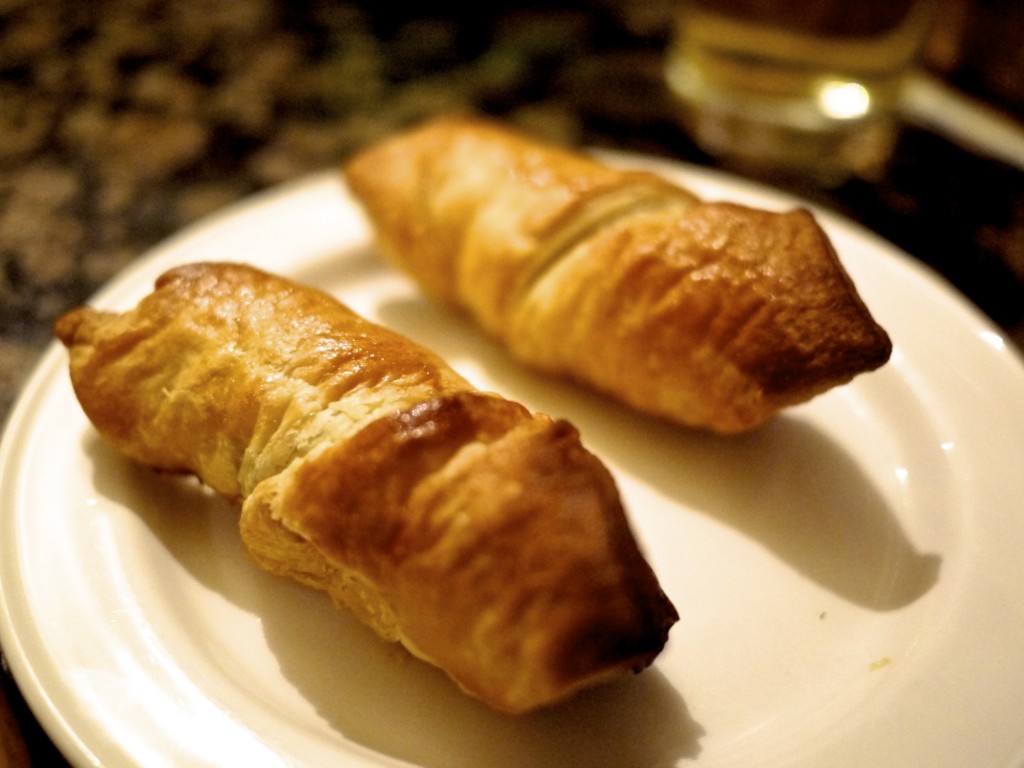 And some chistorra (fast-cured sausage from the Basque region) in puff pastry. It was served fresh from the oven and the spiciness of the sausage was just right. 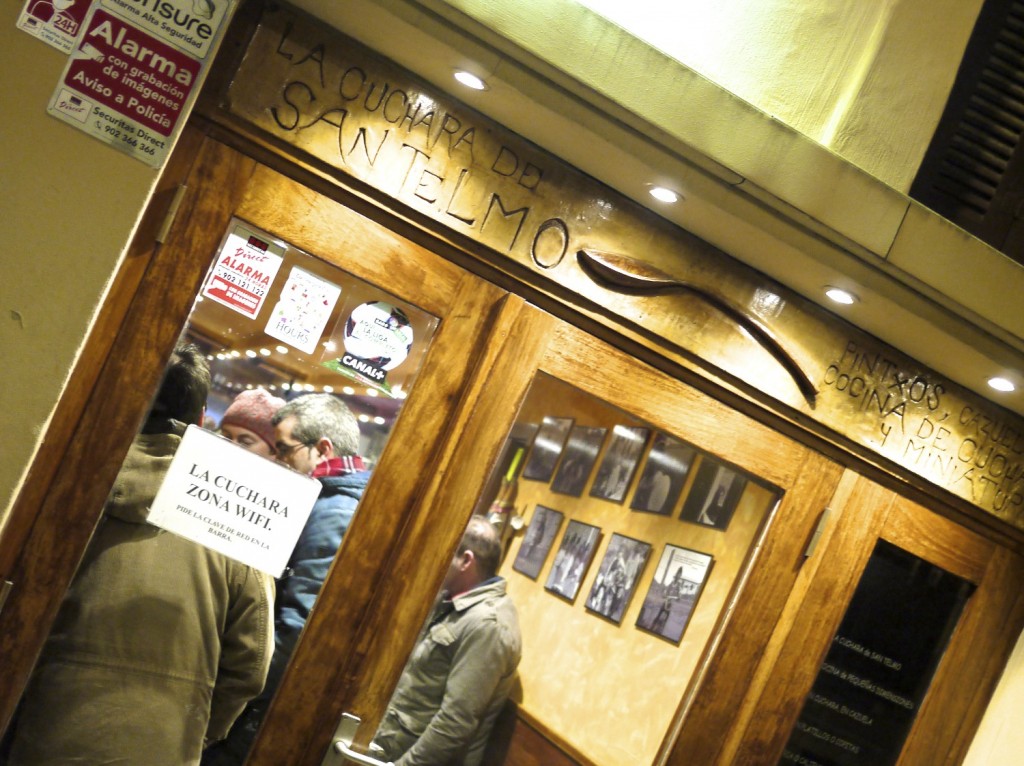 The seared foie gras with a green apple jelly was very good and I was astonished to find it was so reasonably priced at 3.60 euros only (Feb 2013)! It was great to see that luxurious ingredients were affordable to everyone in San Sebastian. The apple jelly was perfect to cut through the foie. 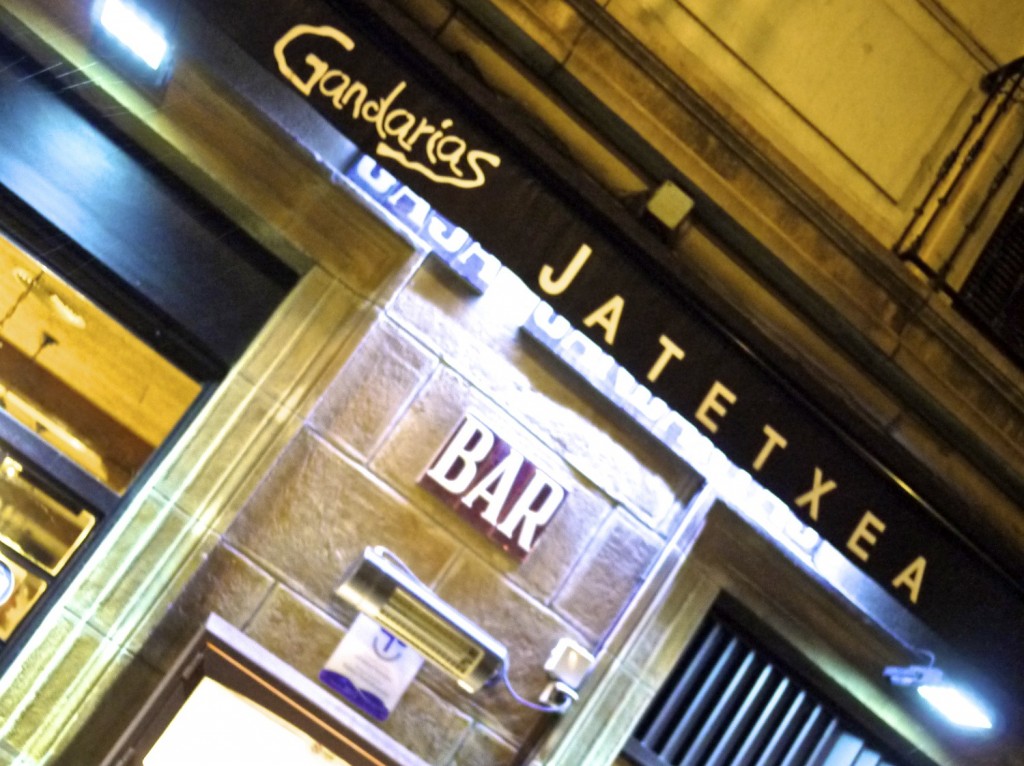 Unfortunately, the last place on our list A Fuego Negro, which serves kobe beef mini hamburgers was shut! Luckily a local overheard us conversing in Spanish and gave us a few more recommendations. Had it not been for her we would have walked straight past Gandarias Jatetxea on Calle 31 de Agosto 23, which is famous for steaks. 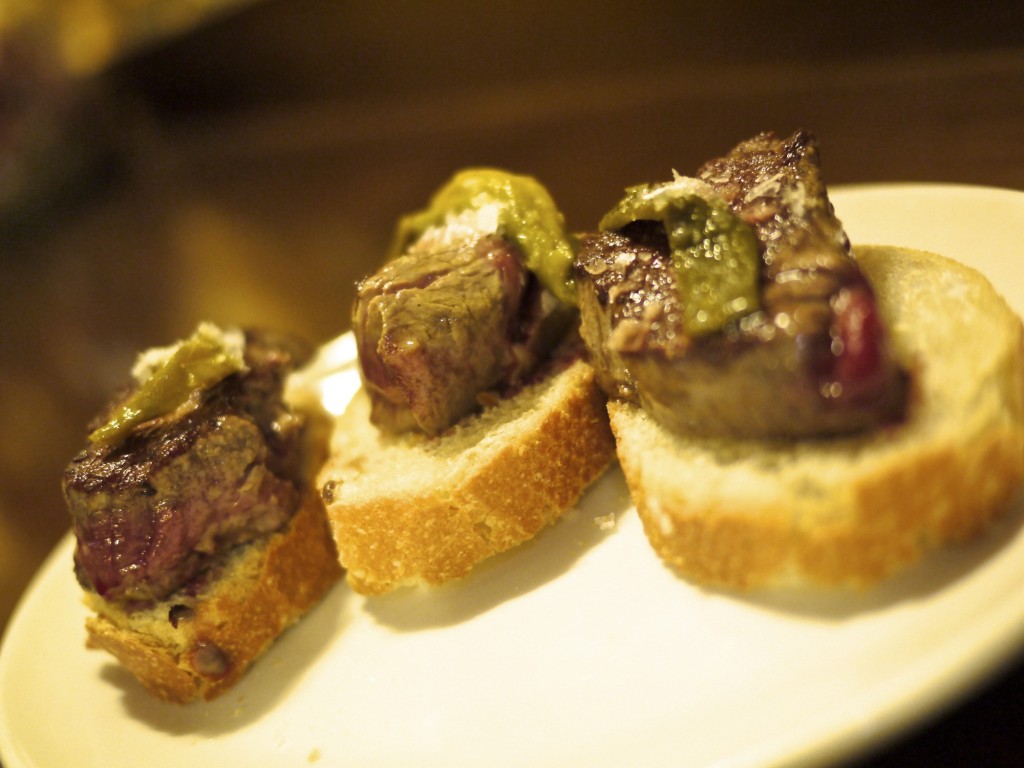 We were quite full at this stage, or so we thought, and opted for the solomillo (sirloin) with green peppers on bread. The meat was so soft and cooked exactly the way I like my meat; medium-rare. This was so good we decided to stay here and order another three pieces each before heading to a bar for some cocktails.

I can see why so many people flock to this city for the humble pintxos. Although the concept of pintxo dining is very casual and laid back, the locals here take food very seriously and it is evident wherever you go. One could easily spend a week here and hardly make a dent to trying all the amazing restaurants the city and the surrounding region has to offer. The solution? Move there permanently of course!