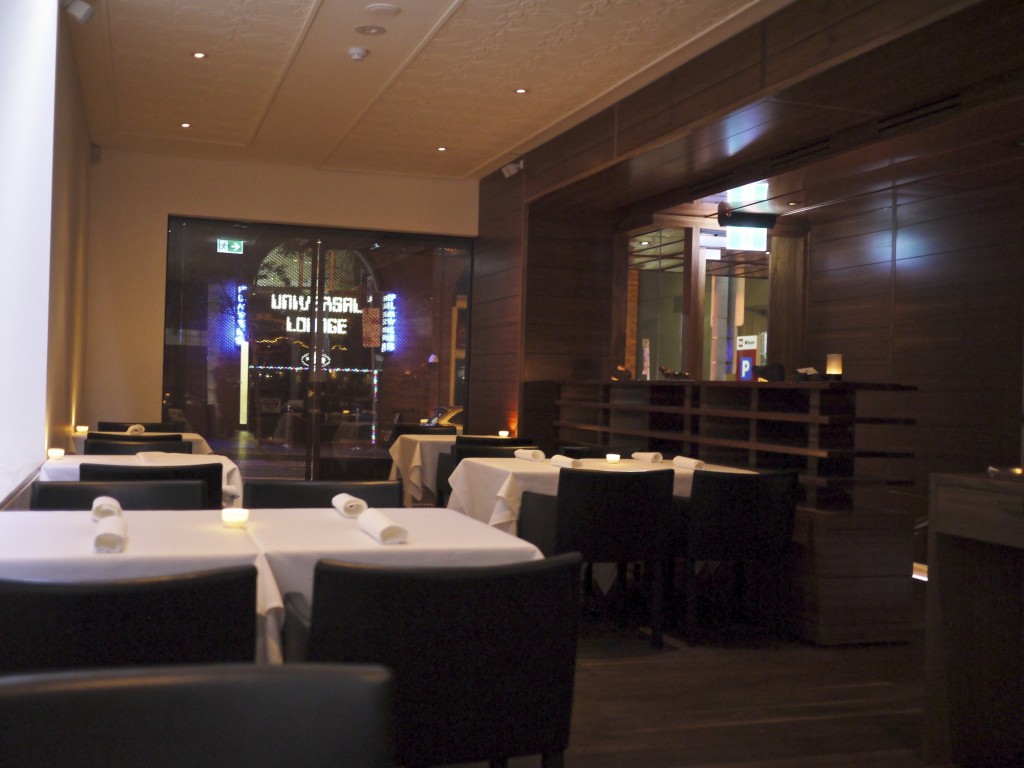 At the tender age of 29, Alejandro Cancino already has an impressive résumé having amassed a wealth of knowledge and experience at big names like Mugaritz, Le Manoir Aux Quat’ Saison and Noma. To top it off he’s even added a Michelin star to his name in Japan. But he is not one to sit on his laurels. In just over a year since his arrival to Brisbane in 2012, Cancino has attracted quite a bit of attention from the culinary world in Australia, snapping up the title of Gourmet Traveller 2013 Best New Talent. What’s more, he has successfully retained Urbane’s Two Hats, and based on my meal in October 2013 it’s not going to be long before he gets the third. 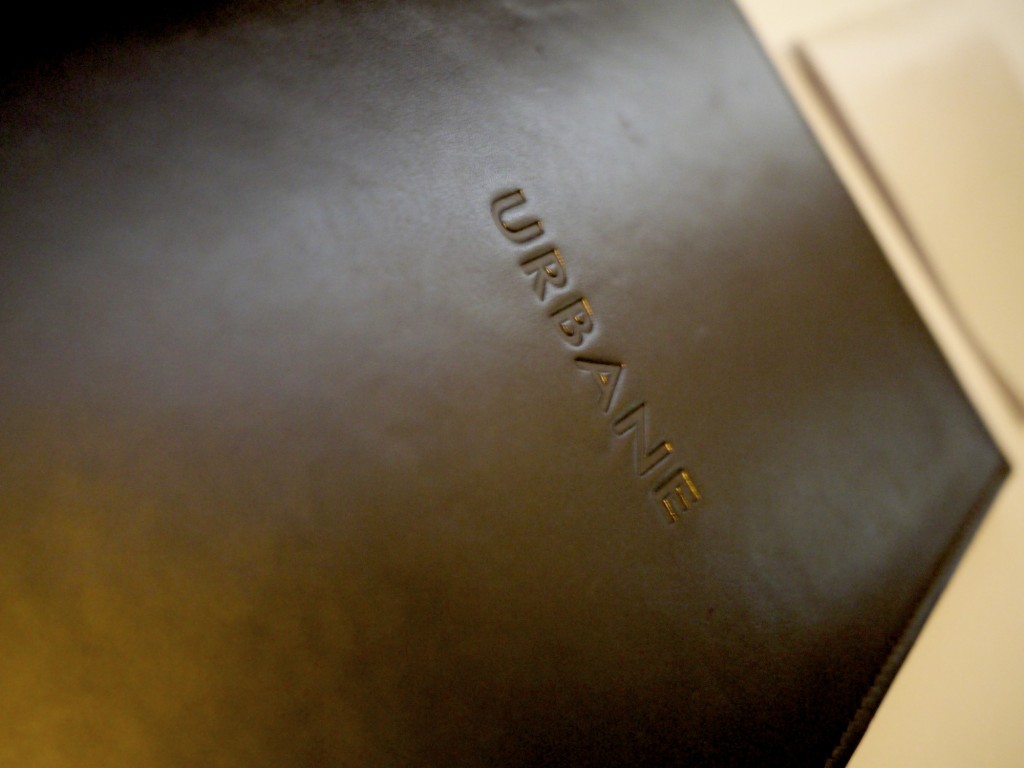 I must have walked past the restaurant a handful of times before succumbing to the inevitably embarassing call asking for directions. I was told to look behind and sure enough it was there, 10 metres away. Having regained my composure, I entered the modern dining room which only had two tables occupied. I was the last person to arrive that evening; not a good omen. I knew Cancino was well known in Brisbane for hosting vegan events. Was that playing against him in a meat-loving nation? Given it was a Tuesday night I gave it the benefit of the doubt. After all, there was hardly anyone walking in the city. Little did I know what I was about to experience… 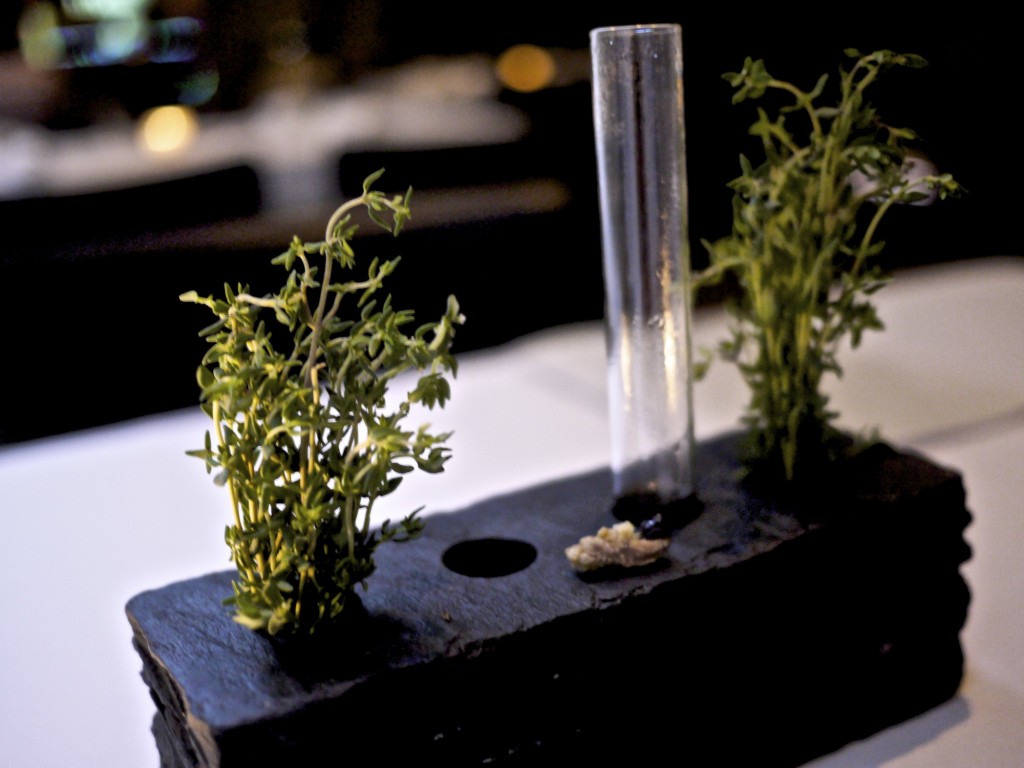 To kick off the evening my friendly waiter for the night brought over a delectable range of amuse bouche starting with Duck Consommé, Tongue. I was advised to eat first the crispy tongue that had been sprinkled with a pink ginger and soy concentrated sauce before washing it down with the consommé. The intensity of the flavour of the duck was superb. A very modern twist to some classic flavours. 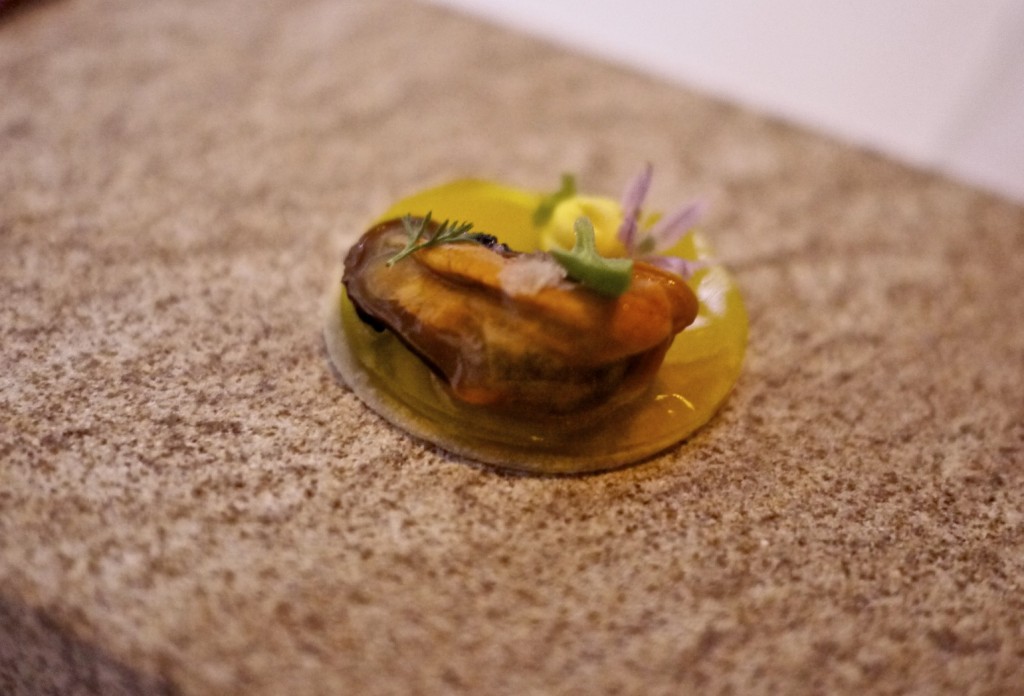 Another delicious morsel of Mussel, Saffron, Rye followed immediately after. The plump mussel from Noosa was perfectly complemented by the seasoning from the soy jelly and the thick texture of the rye crouton disc, finished off with a subtle saffron aftertaste. 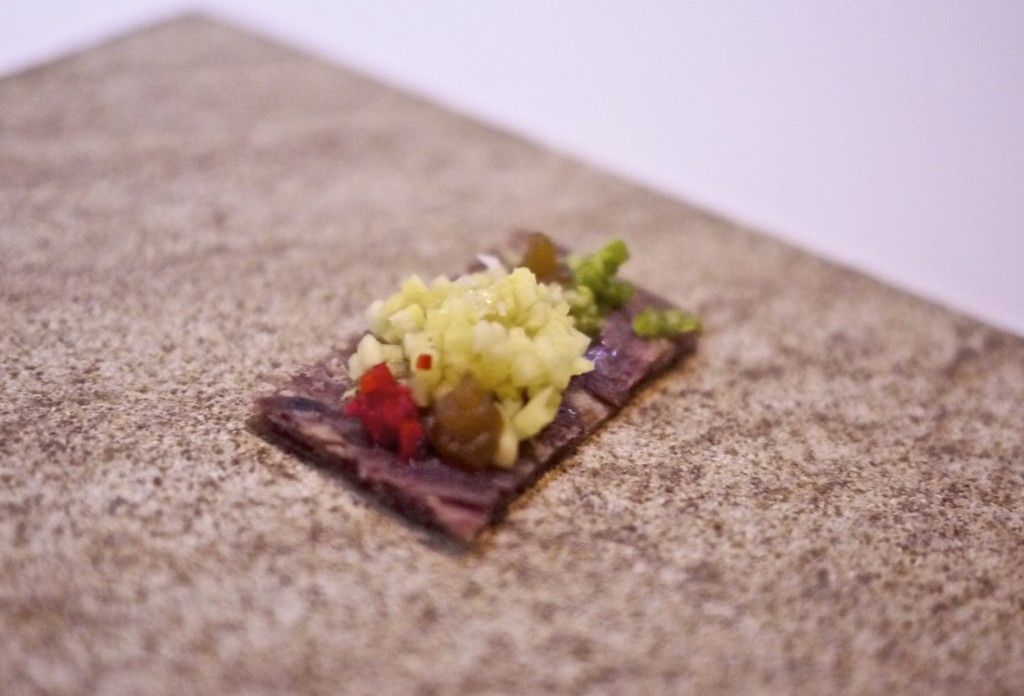 Another bite size Pork Tail, balanced well with ginger and coriander with a ginger glaze. The dried pork jerky base released ample flavour and the small dose of tanginess from the coriander cut through the meat without overwhelming the palate. 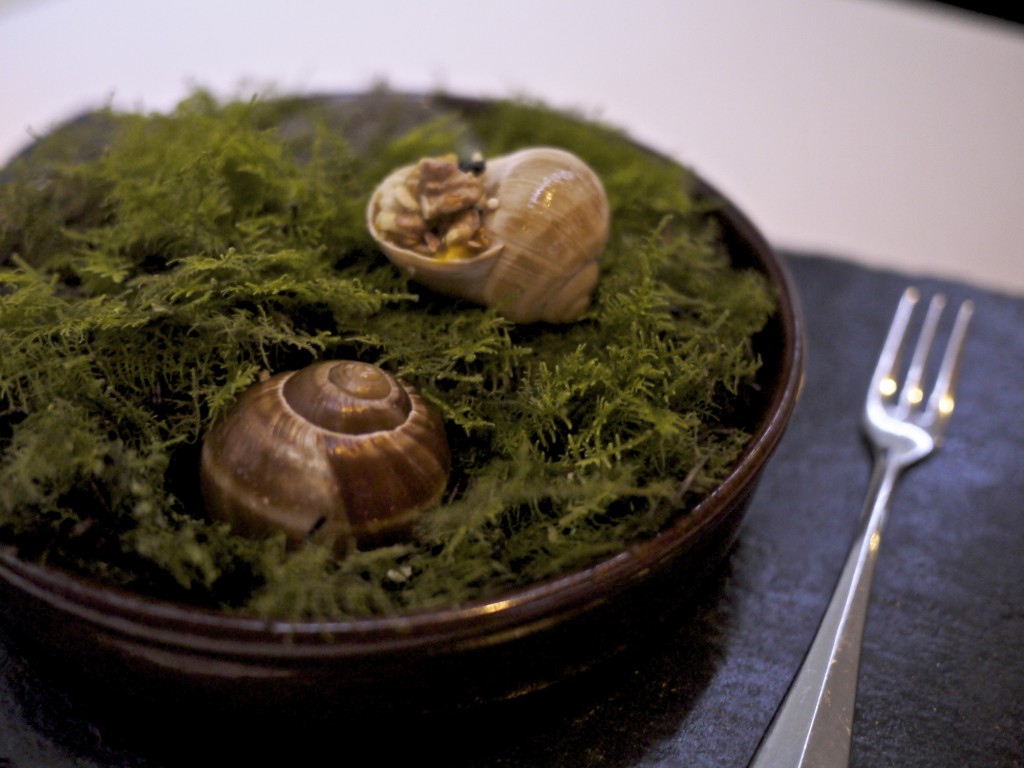 If you’ve never tried snails, then Cancino’s Snail, Carrot would be a perfect introduction. It was a bit messy to pick up but the combination of the caramelised carrot purée with chicken glaze, garlic and walnut purée worked, in fact very well. 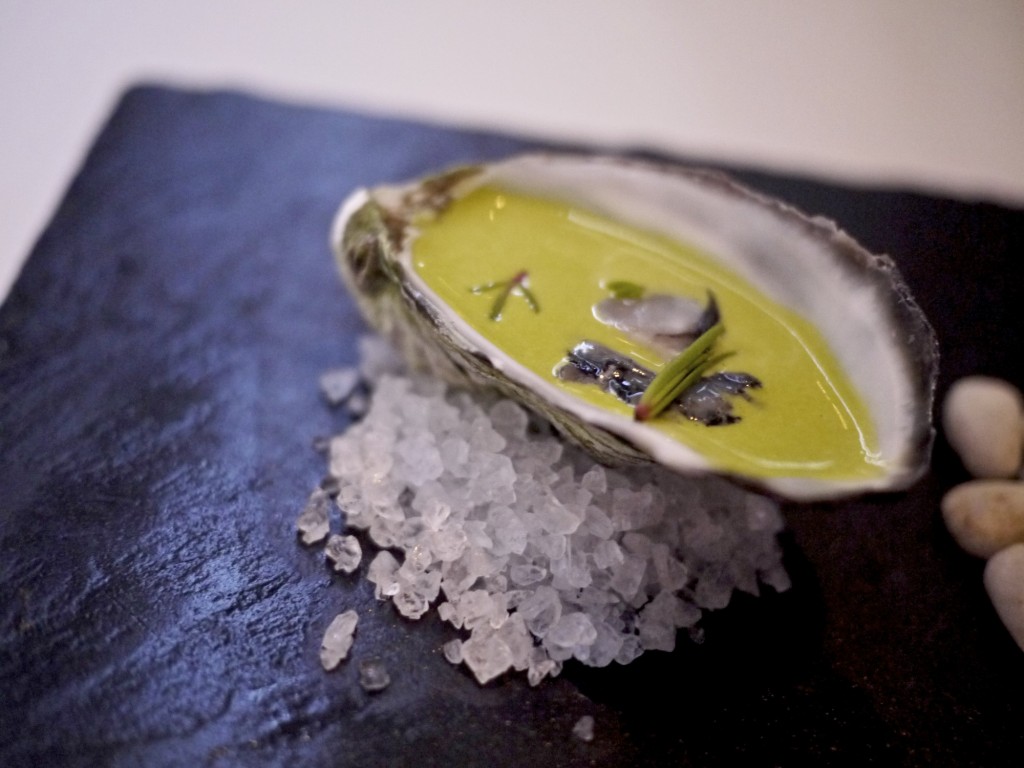 I couldn’t believe that none of the amuse bouche had disappointed yet, including the Oyster Wasabi. It was ingenius. The wasabi beurre blanc took the slight fishiness away from the Coffin Bay oyster with a momentary kick of heat, leaving only the sweetness and taste of the ocean. 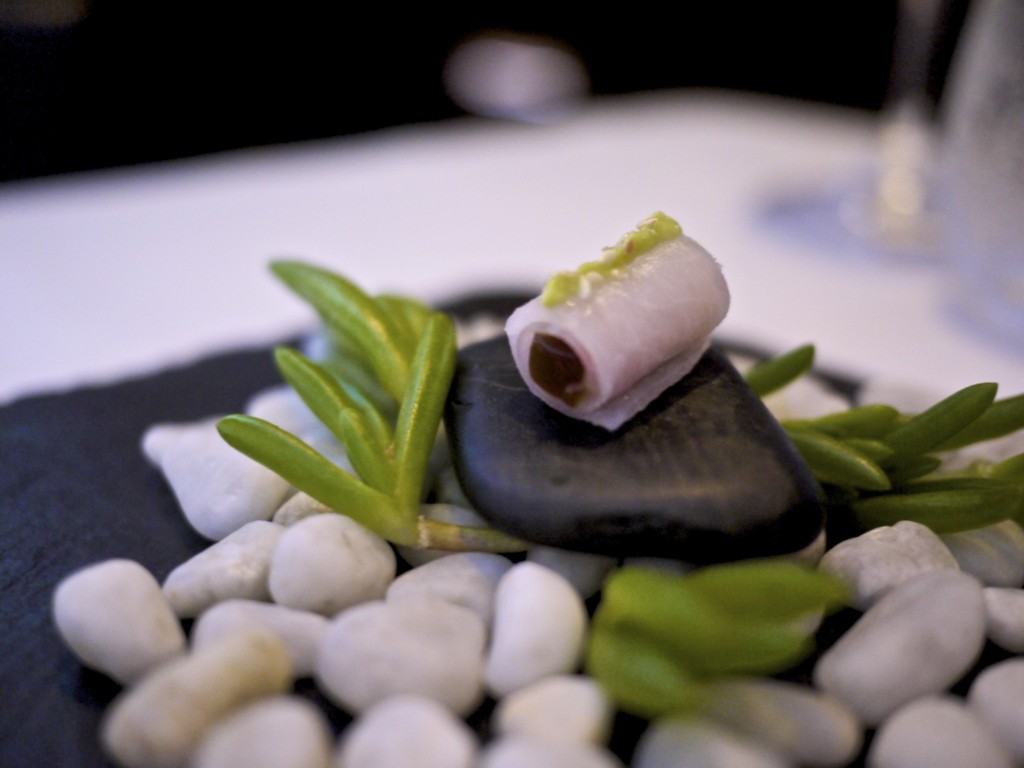 The finale of the amuse bouche was the Cobia Sashimi rolled around a jelly of ponzu and soy sauce, topped with some freshly grated wasabi. The ponzu jelly cut through the fatty fish and left a very clean aftertaste. I was thoroughly impressed with the opening act but equally worried whether he would be able to maintain this standard across the rest of the menu. 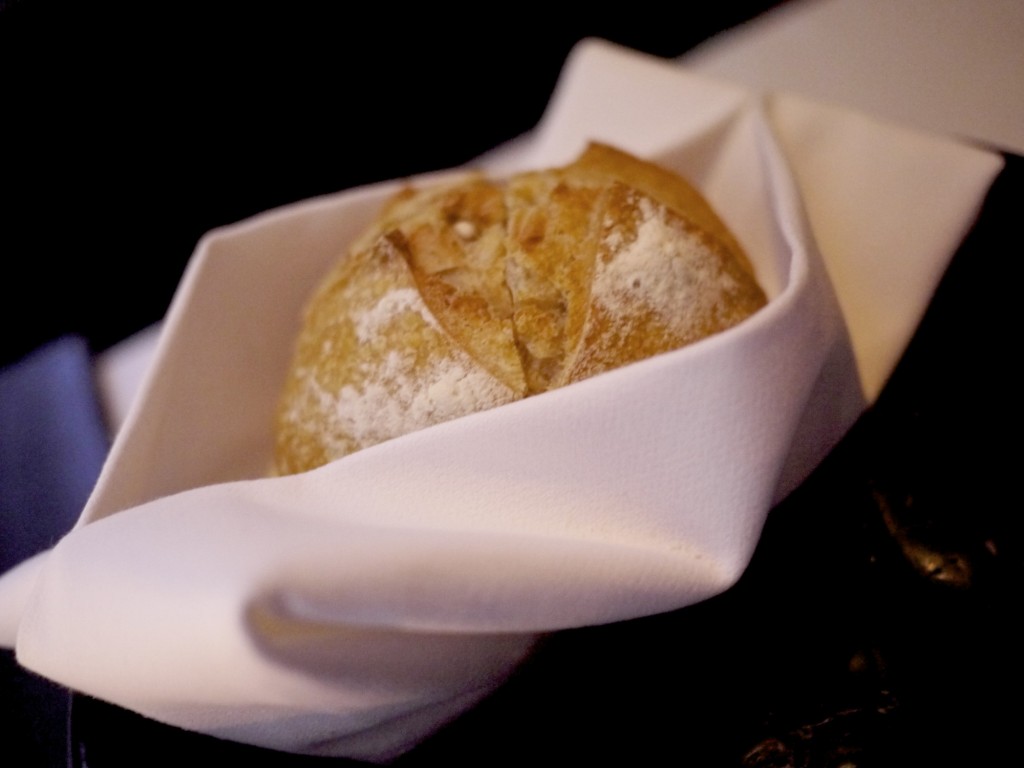 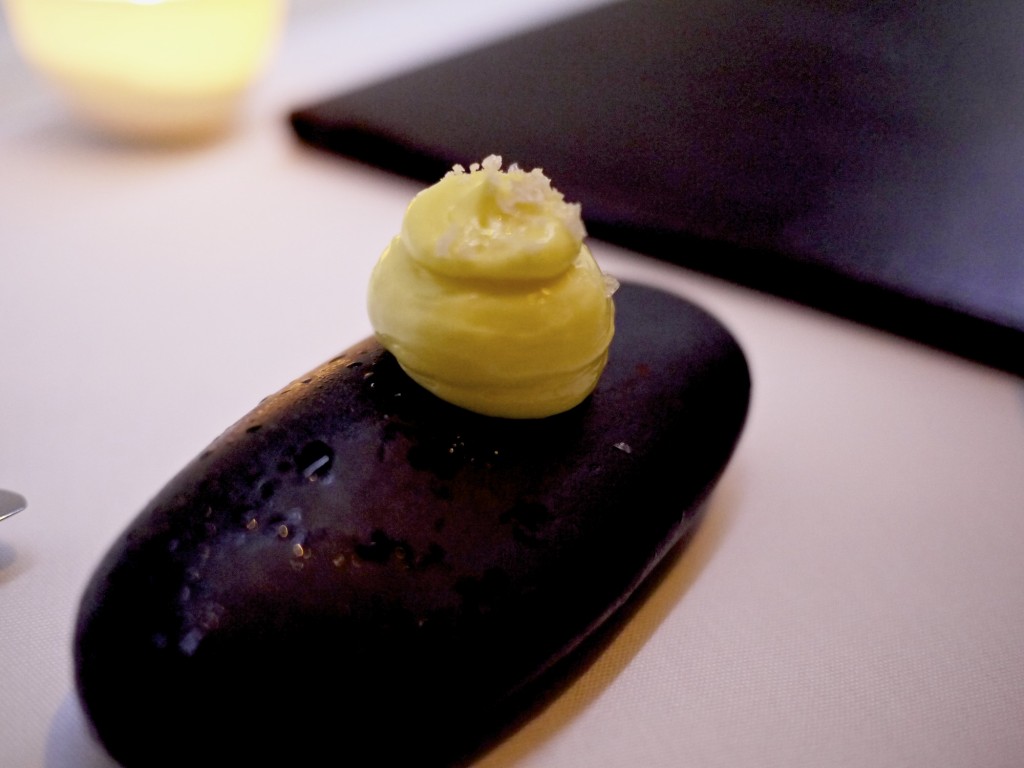 … served with whipped butter. The bread was nothing special and slightly disappointing. I must admit that good home made bread is something which I have found to be lacking across fine dining establishments in Australia. 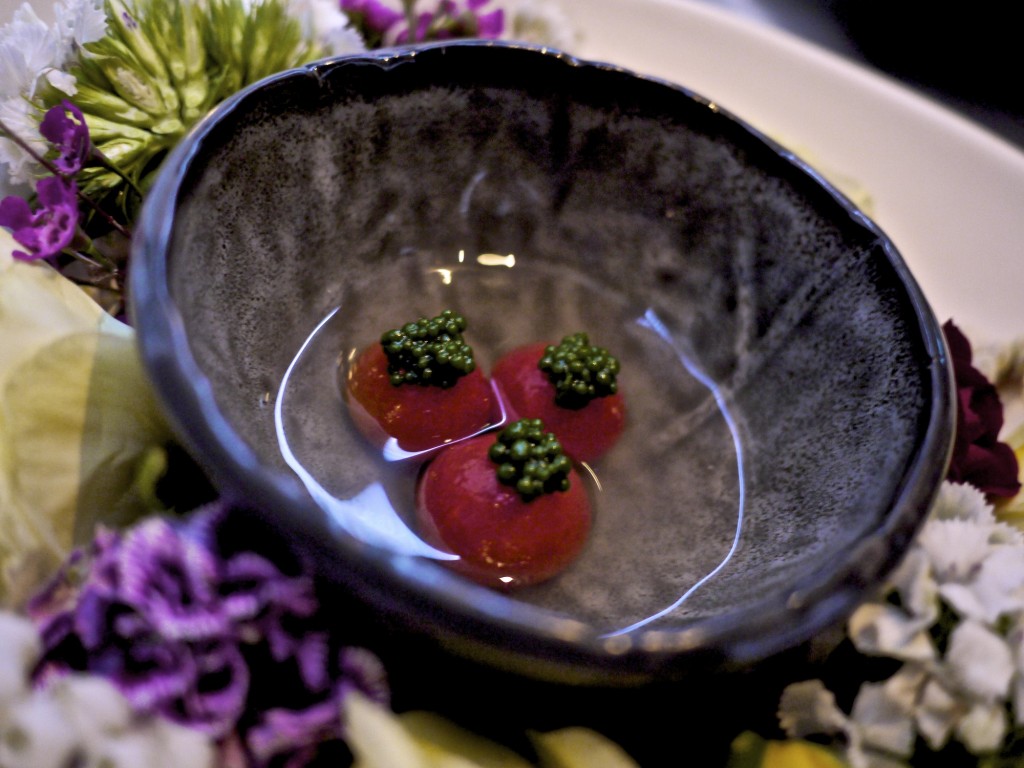 Cancino came out briefly to introduce himself before the main part of the meal commenced. I had to do a double take as the humble chef who came out looked so young. After a brief chat he excused himself before returning to the kitchen to prepare my first course of the evening, Spring, which consisted of a colourless tomato water, peeled heirloom tomatoes and spherified basil purée. Very clean on the palate and extremely refreshing. It came with a side of… 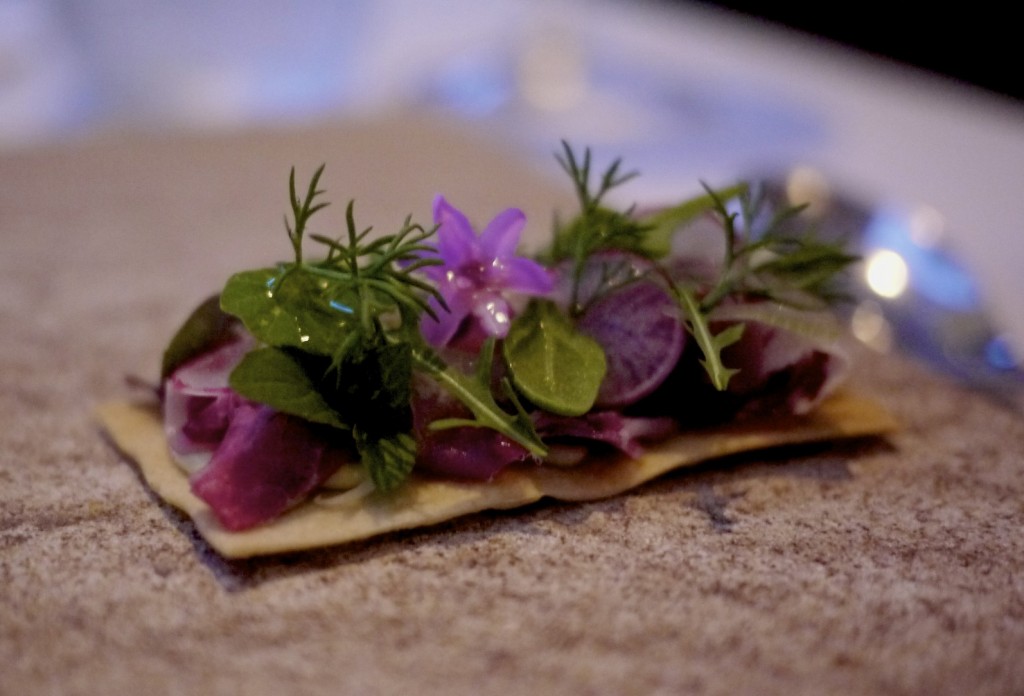 … Crouton mounted with a glossy Jamon Iberico, anchovy paste and herbs from Cancino’s garden in the alleyway. I couldn’t fault the quality of the produce but I found the anchovy’s fishiness dominating the ham. 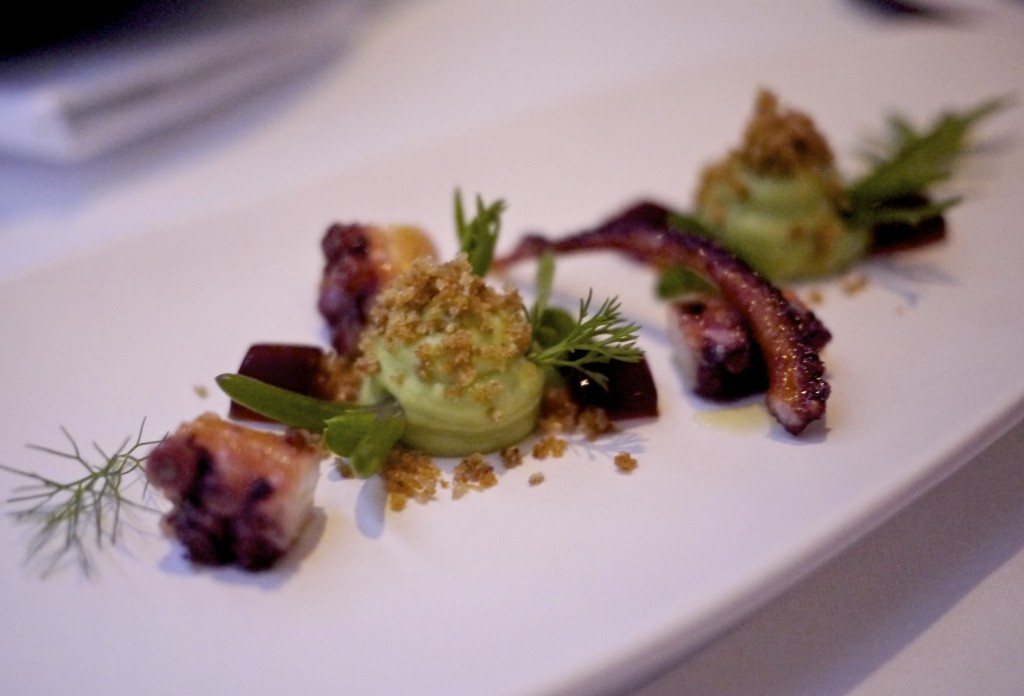 It was apparent that Cancino was taken by ponzu as he incorporated it another jelly form in the Octopus, Beach Herbs. The mollusc was seasoned by the jelly and salty rye crumbs that had been scattered over the avocado mousse. It was overall a bit salty but the textures and flavours of the dish were spot on. 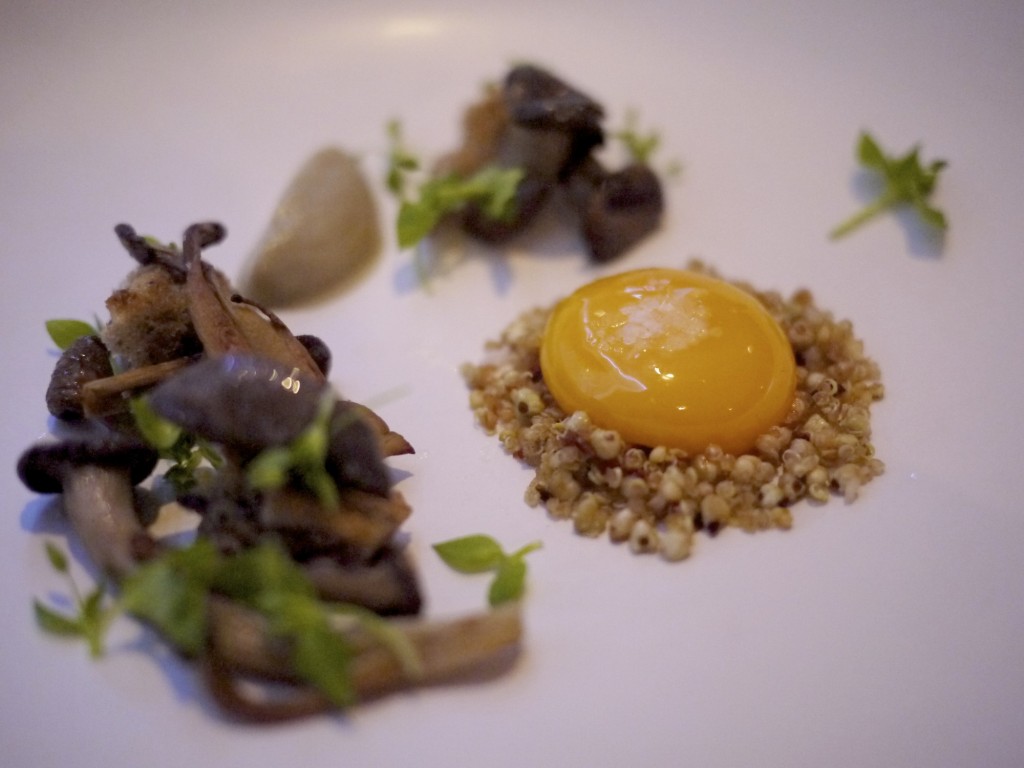 A much more delicately balanced dish ensued with the Egg Yolk, Buckwheat, Shimeji. The earthy elements of the slow cooked hen’s egg and shimeji mushroom blended harmoniously with the smokey aubergine purée and salty lumps of chorizo. In case the buckwheat wasn’t enough to soak up the yolk there was also some fresh walnut bread. Divine. 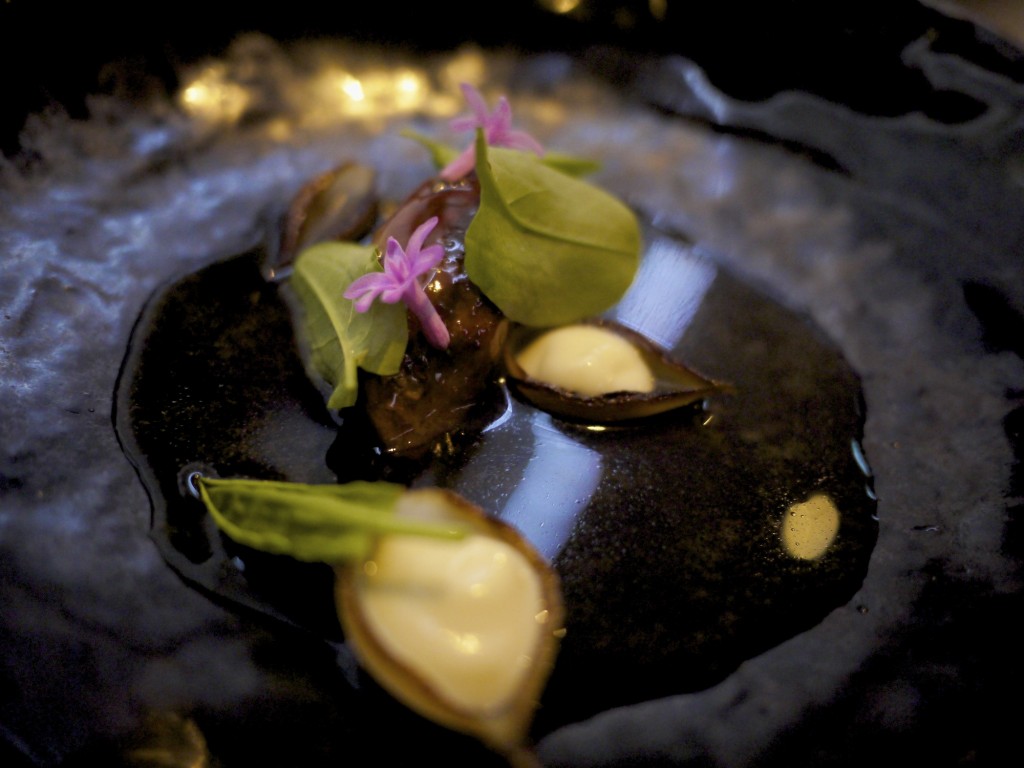 The penultimate savoury course of Pork Cheek, Onion, Garlic was all about the alliums. From the variety of onion preparations including purée, consommé and roasted, to the garlic flower, garlic purée and ginger, this dish delivered punchy flavours. The consommé actually did remind me of the soba noodle sauce (tsuyu) although I was reassured that wasn’t the case. 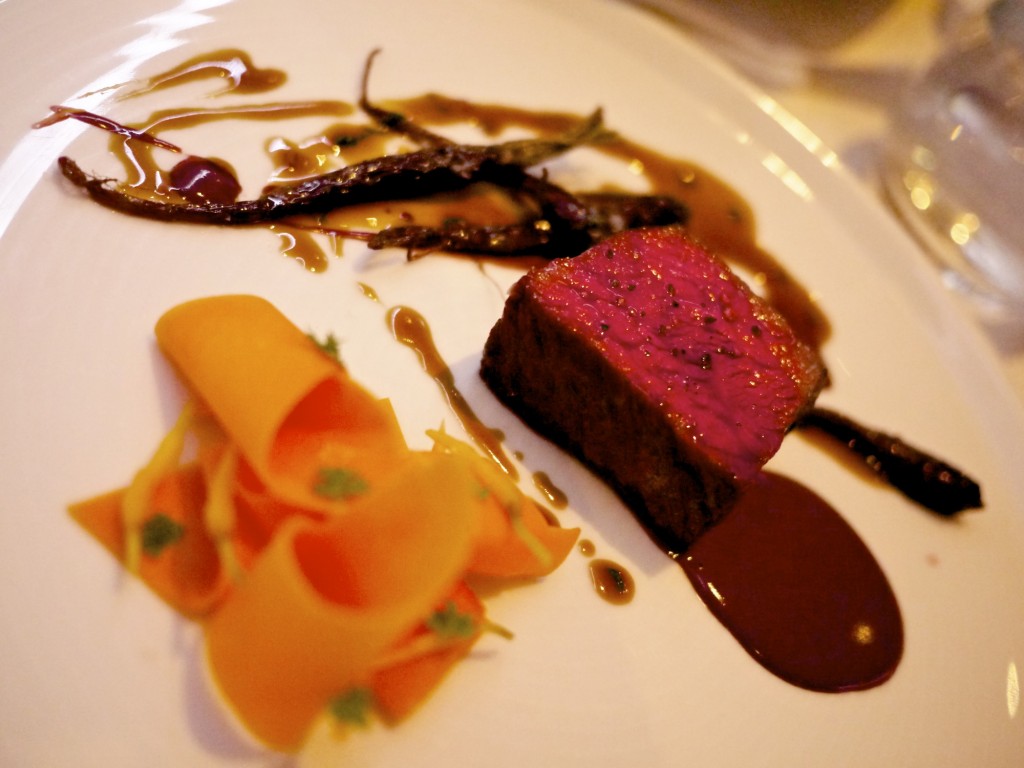 The best dish of the evening was without a shadow of a doubt the Wagyu, Black Pudding, Carrot. The cut of the wagyu, sourced from Cabassi & Co in Queensland, was a pillow of the cube-roll and it was served with a black pudding sauce and carrot two-ways; pickled and roasted. The marbling of this cut was superb and took me back to the phenomenal dish I had at Ledoyen in Paris. The slight sharpness from the pickled carrot sliced through the rich beef. In my honest opinion, this steak was far superior to anything I’ve previously had in Australia including the big names. 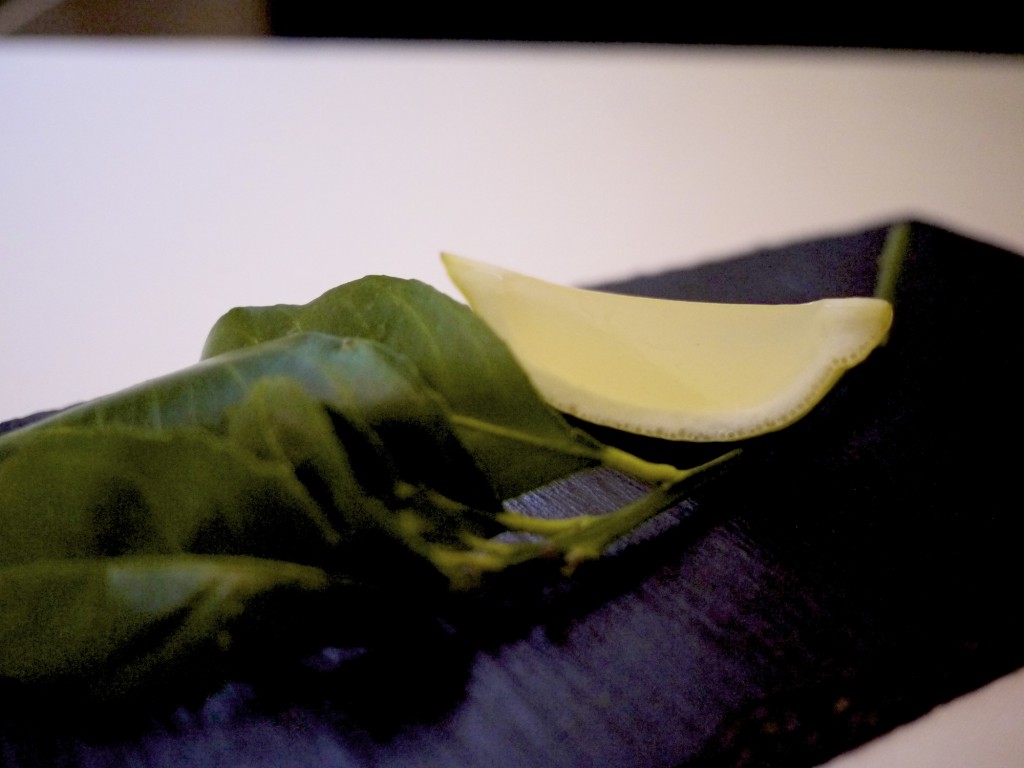 As a palate cleanser a reconstructed Grapefruit was served. It was essentially grapfruit jelly set back on the skin of the grapfruit. It was very refreshing and not too bitter. It was so well made I initially thought that I was being served a slice of grapefruit! 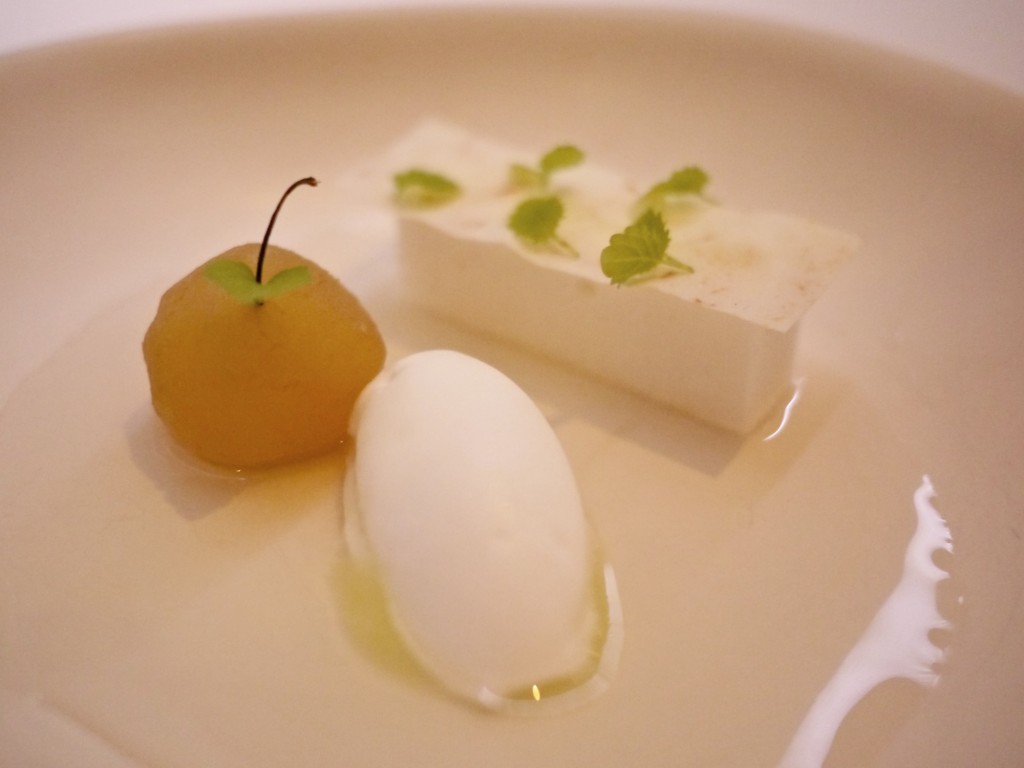 Based on the first dessert, Local Pink Lady Apple, Lemongrass, Ginger, I assumed that pink lady apple was quite popular this time of the year! I had the apple served as a sorbet and also fossilised (dried using chemicals) although the texture of the skin was not to my liking as it felt a bit leathery. The ginger was nice and left a slight tingle on my tongue. 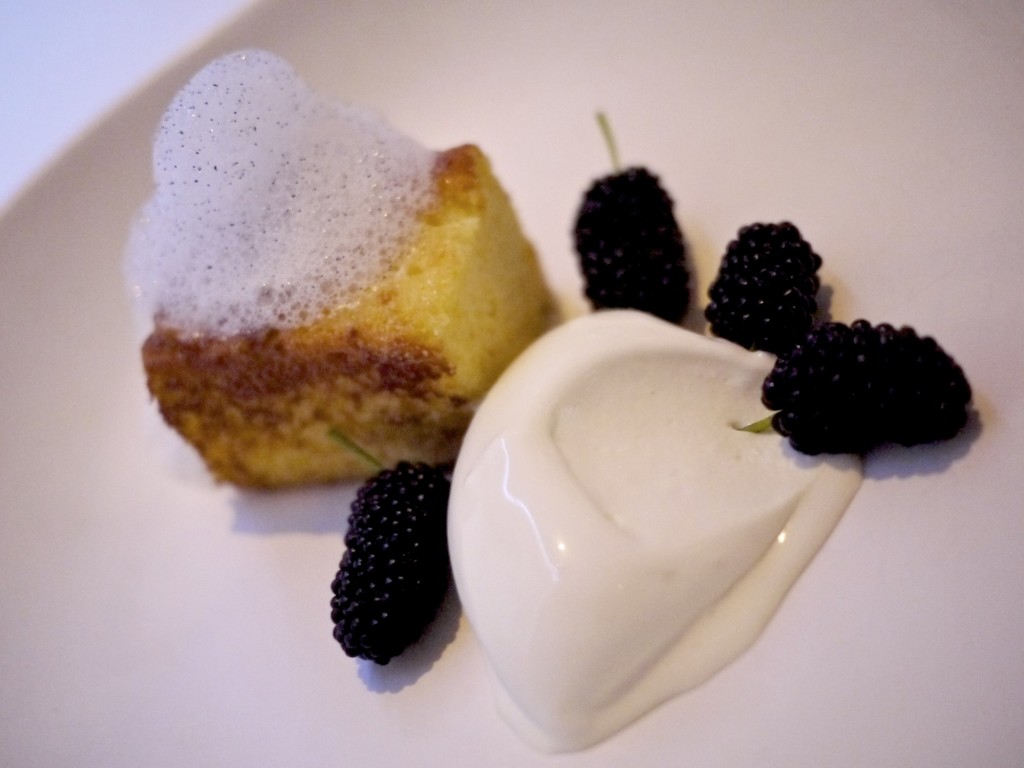 The final dessert course was Eucalyptus, Pain Perdu which I found rather uninspiring compared to his savoury dishes. The eucalyptus ice cream was delicious but I felt the mulberry foam and fruits did not belong on the same plate as it was bitter enough already. 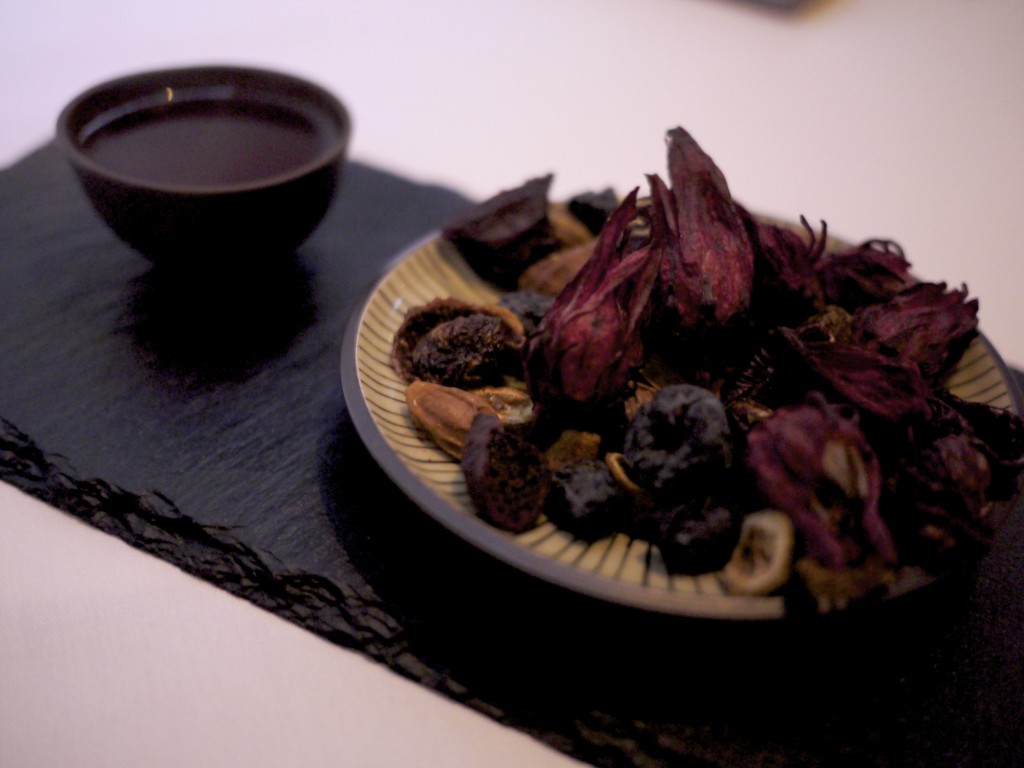 Some tea made from Native Fruit Infusion to sip whilst I reflected on the meal I just had. The native fruits used were displayed by the tea for educational purpose only and included Quondongs, Rosela and other familiar fruits I came across at Attica a few months ago. I was surprised at how sweet the tea was. 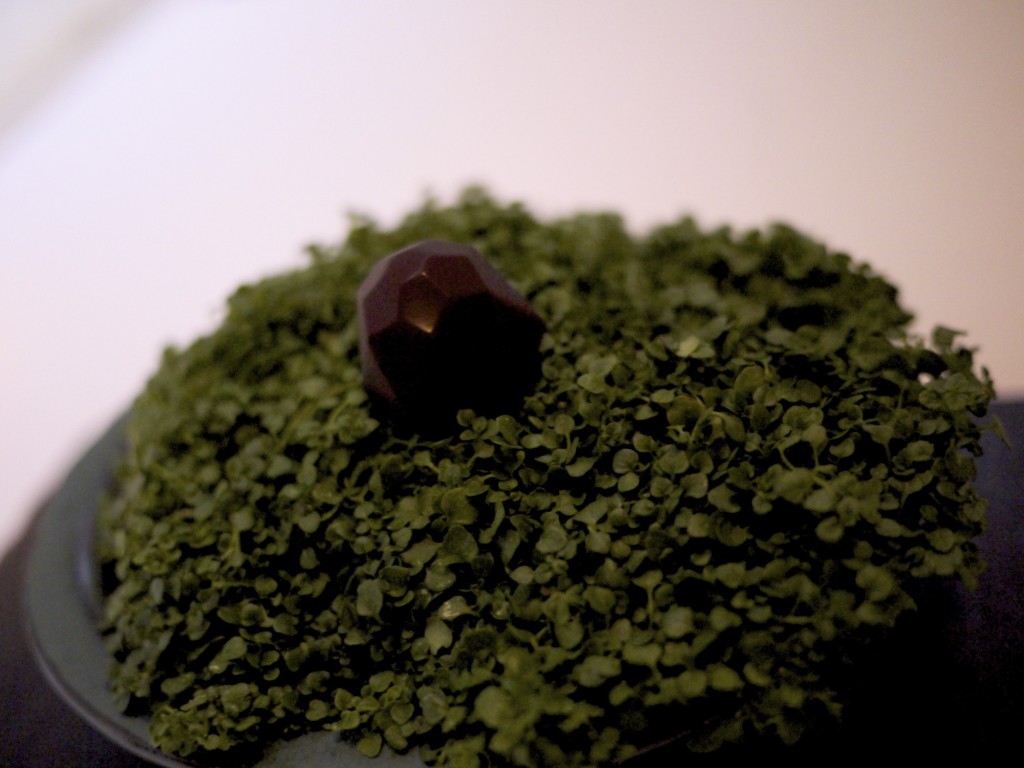 The tea came with a valrhona white chocolate with Corsican mint. It was good as far as minty chocolates went but mint chocolate has never been my thing and I wasn’t going to change that night. 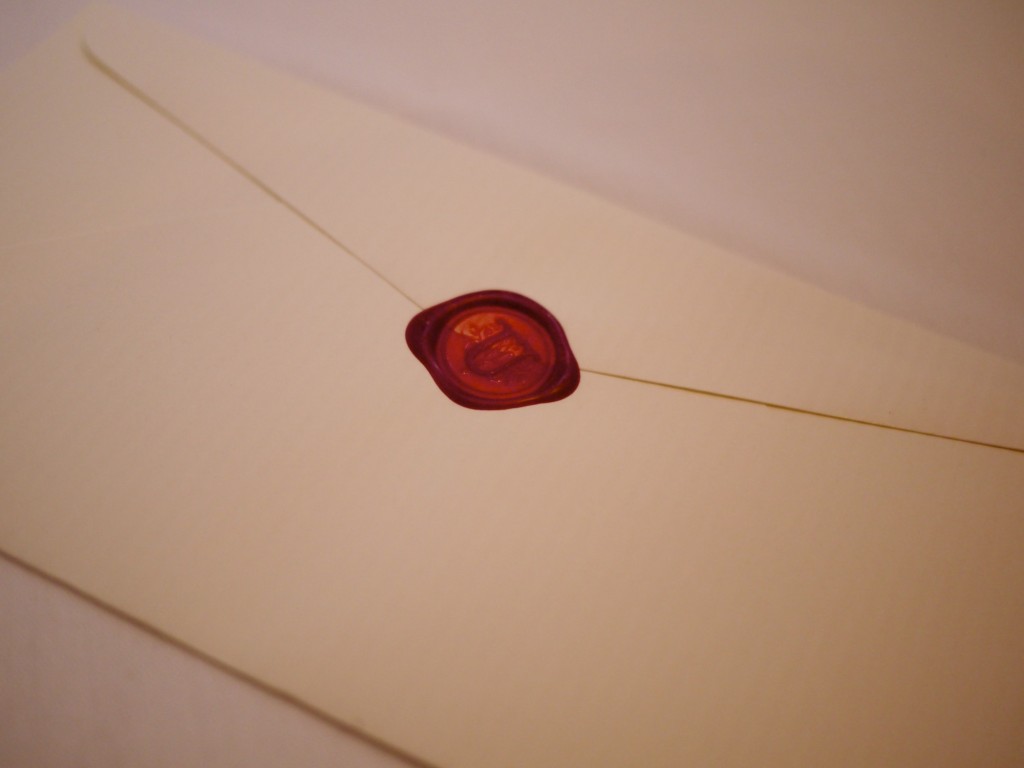 I went to Brisbane with little expectation and left the city enchanted. For a city that has never really been associated with fine dining, Urbane is a breath of fresh air. Despite his youthful looks, Cancino brings a wealth of knowledge, experience and passion to the local dining scene and he is a force to be reckoned with in Australia. And from our brief chat after dinner, I reckon he has only just got started here and is definitely one to watch. His enthusiasm for sourcing fresh produce and ingredients was contagious and his discovery in such a short period of time impressive. Let’s hope he sticks around for a while. If he felt like a change in scenery I’d be the first one to welcome him down to Melbourne!