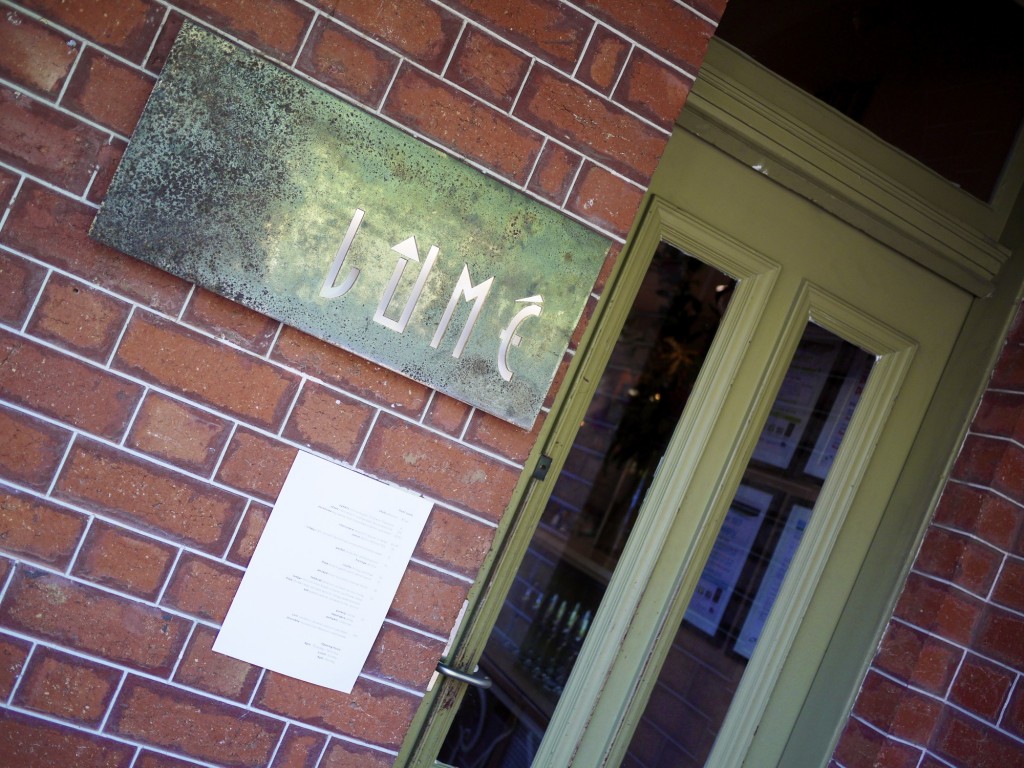 Amidst all the excitement and hullabaloo that surrounded the Fat Duck’s short stint in Melbourne, it wasn’t until they closed their curtain in August that I realised that a team of three talented individuals were quietly embarking on establishing a world class restaurant in South Melbourne! Ambitious you may say, but their credentials speak for themselves. Collectively they’ve worked across a number of top fine dining establishments like Bo Innovation, Chateaubriand and Royal Mail.  They looked pretty serious on paper, so naturally I had to put it to test. After all, how many restaurants in Australia can boast a generous and constant supply of wine from AP Birk’s Wendouree Wine cellar? 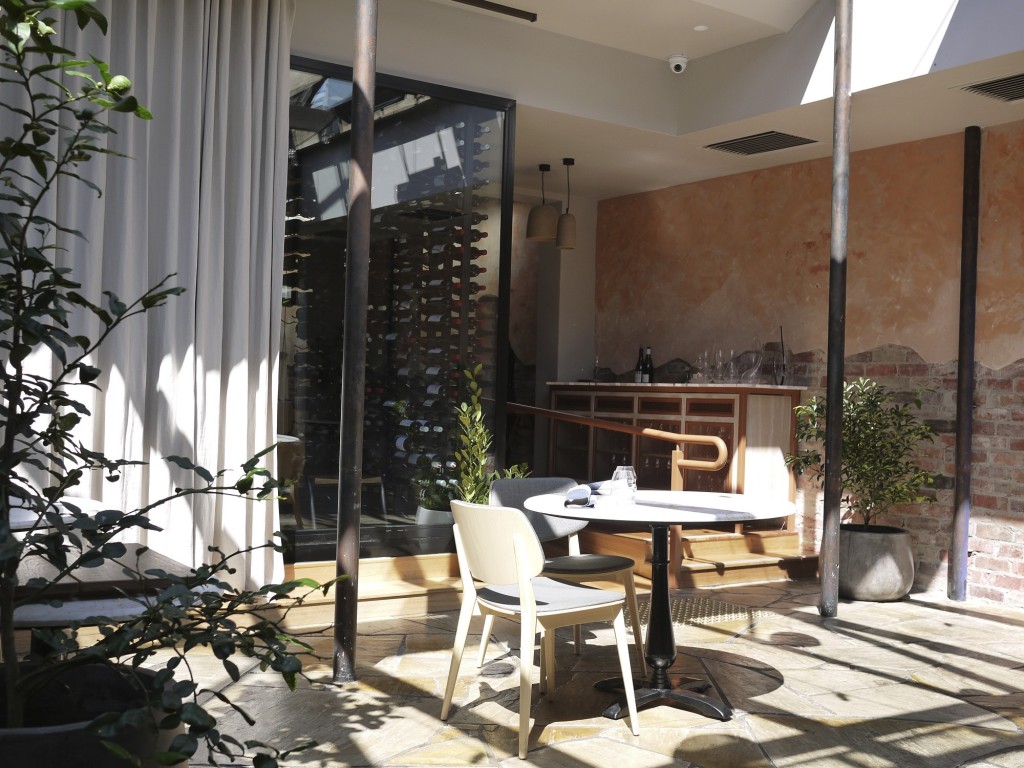 The history of the premises is rich and colourful. It used to be a bordello before the Bohemia Cabaret Club and, I believe, an Indian restaurant moved in at the same time. There has certainly been a big transformation. From the street however it is still very unassuming and one would be forgiven for walking past it without batting an eye lid. The interior of the restaurant is a whole different story with a relaxed but stylish designer feel. The atrium space they created at the back of the restaurant was a wonderful surprise. Covered with a retractable glass roof, it was a well of beautiful light, with green vertical walls creating a peaceful oasis. I normally like sitting in front of the kitchen and the pass, but given the glorious weather we had on Grand Final weekend, I was very happy to be soaking up the sunlight for the four hour experience we embarked on. 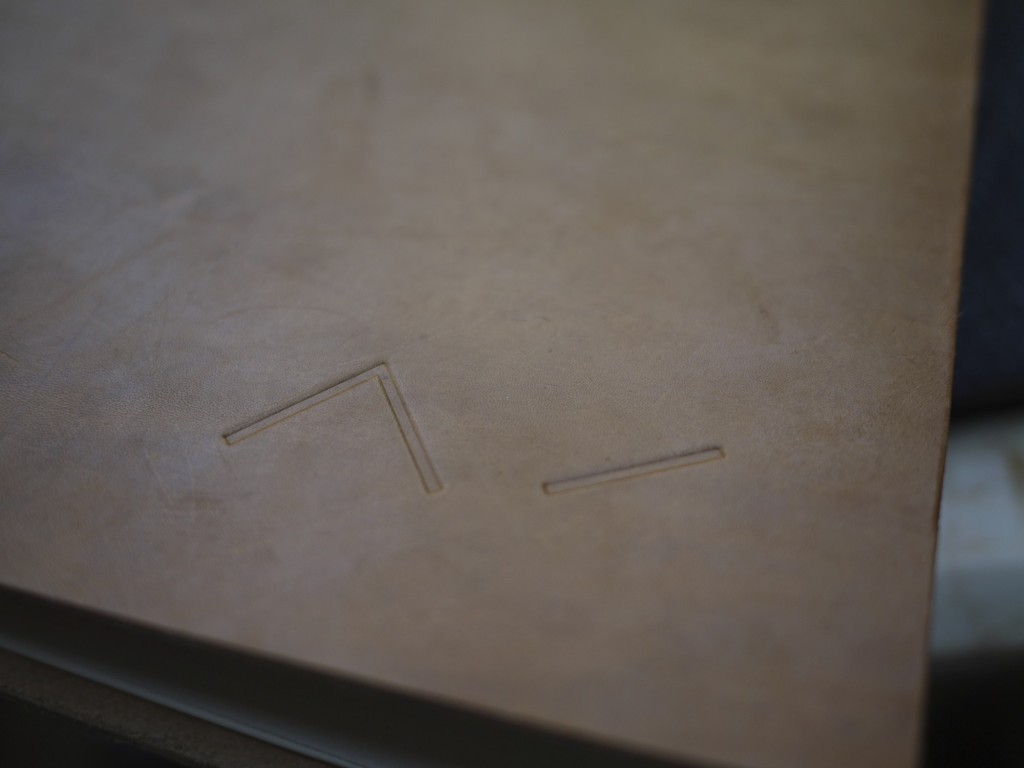 The choice was pretty simple. The formal end of the dining room at the back only served one tasting menu consisting of 15 courses, with an option to match each course with a splash of alcoholic beverage cleverly chosen by Sommelier Sally Humble. I opted for the full matching option, particularly after I was advised the beverage options were diverse and not only confined to wine.

We were initially worried as this was our first fine dining experience in Australia with our 10 month old daughter but the staff were ever so accommodating (this was a nice change from Vue de Monde, who had previously flatly refused to accept a friends very food literate 8 month old daughter!!). We did promise them that she was well versed in fine dining. After all, she had already survived a number of Michelin starred meals in France! 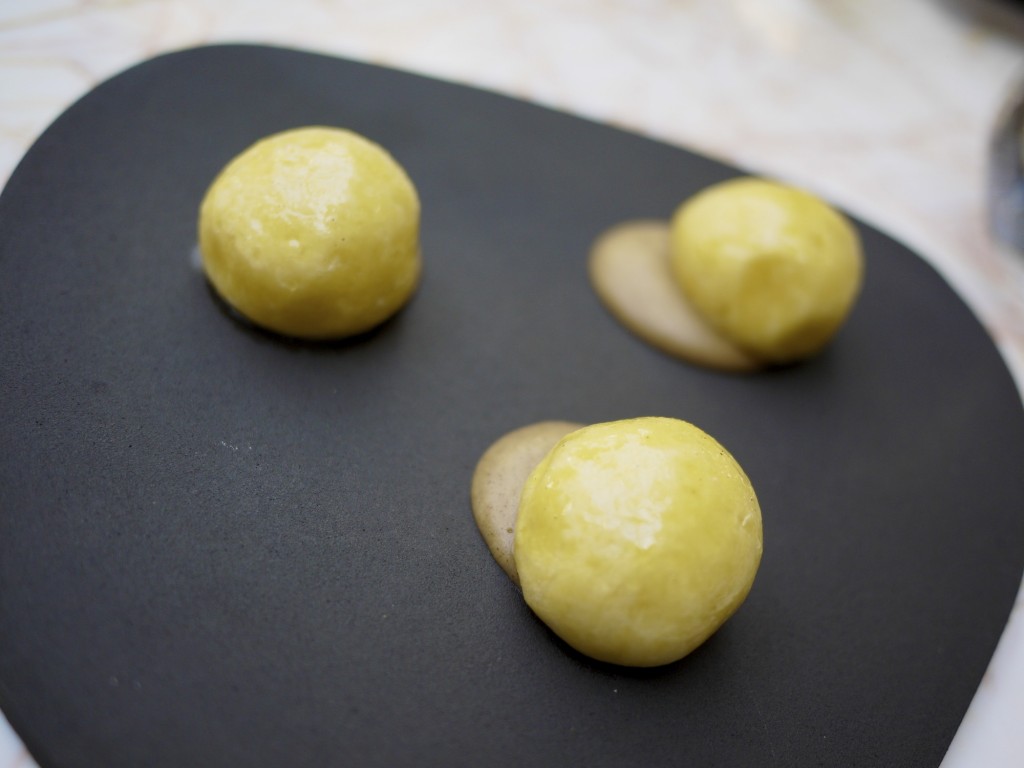 First course – Warm buttered dough with a burnt and sour crust. The texture was quite similar to that of a brioche; fluffy, moist and pleasant. However, I felt the flavour was one-dimensional despite the burnt and sour crust purée, and it could have benefited from a stronger contrasting flavour to the dough. 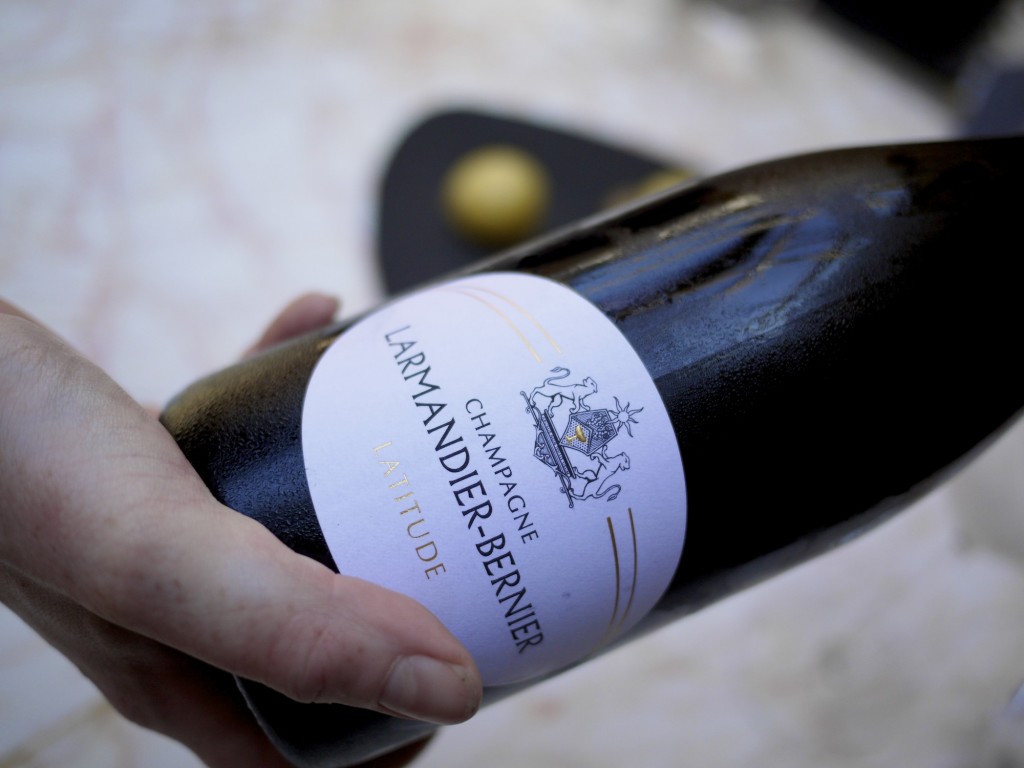 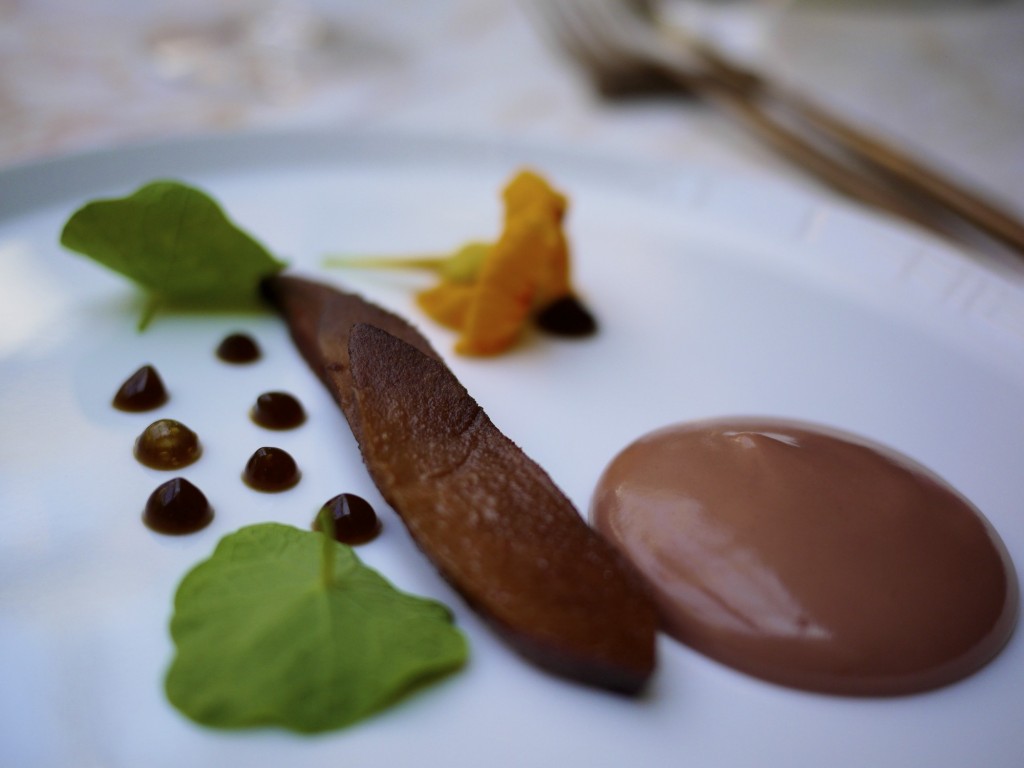 Second Course – Rare roasted quince with notes of chamomile and honey, duck liver and nasturtiums served with Georg Breuer Auselese Riesling, Rheingau, 2013. This was a rather deceiving dish as the juicy looking slices of duck liver turned out to be roasted quince. It had been cooked in butter and sage, and was served with a a very rich duck liver parfait, dollops of honey and chamomile. I thought it was a very clever use of texture and flavours. 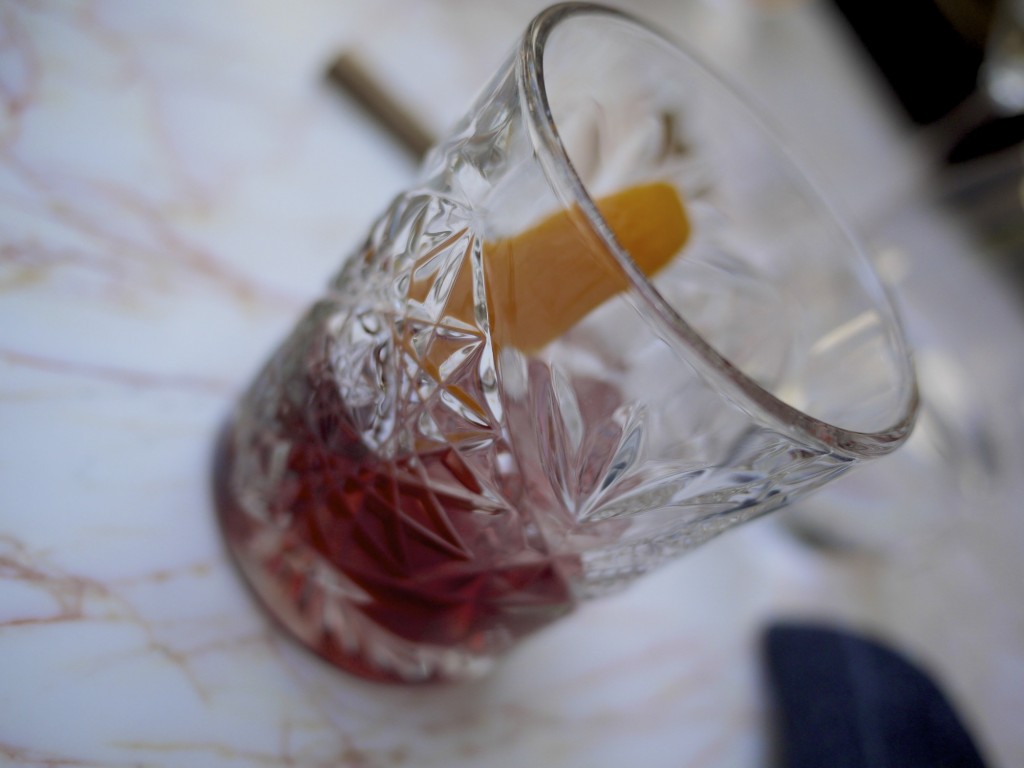 A glass of Maidenii ‘classic’ to go with the next course. We were told that the Maidenii Vermouth was a collaboration between French wine maker Gilles Lapalus and Australian bartender Shaun Byrne. It was what they thought was the ‘perfect’ vermouth. It was certainly not bad at all… although I’m not a big vermouth drinker so I am probably not the best person to judge! 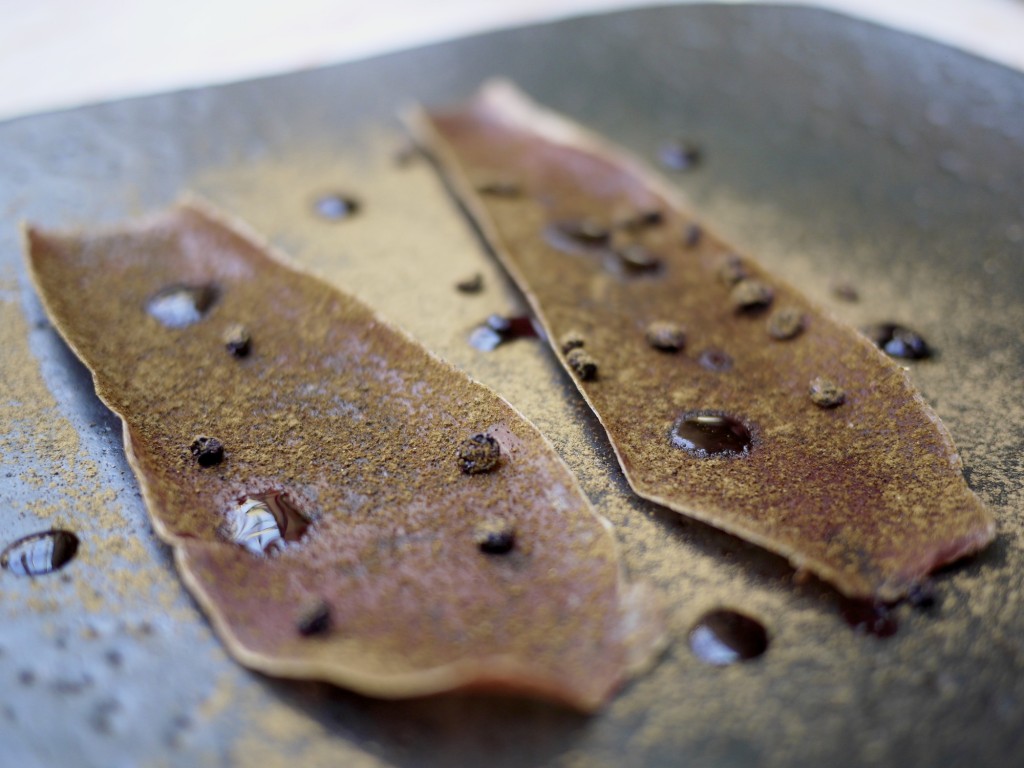 Third Course – Native bird dressed with white soy and hibiscus. The bird of choice here was an emu that had been air dried, cured in sour cherry and hung for six weeks. It was dusted with a sweet white miso powder, tangy hibiscus drops and chewy dried native berries. One thing I would have appreciated here was a wet towel afterwards, as it was nigh on impossible to avoid having sticky fingers! 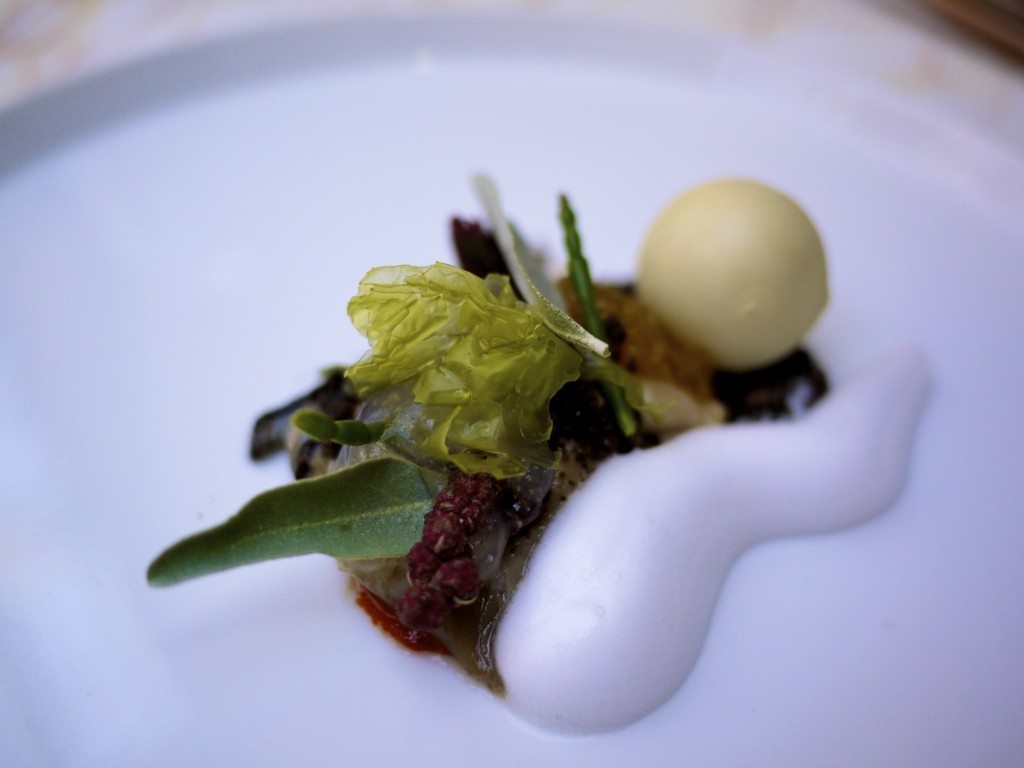 Fourth Course – Pearl on the ocean floor paired with a Uehara Shuzō ‘Soma no Tengu’ 2012, Usunigori (shaken to serve). This was a mouthful of the ocean and I mean that in a good way. The little cold ball was recommended to be consumed first to clean the palate and enjoy the flavour of the oyster which was hidden underneath the sea lettuce and other succulents. The glass of sake was ever so perfect to wash the salty flavour down. 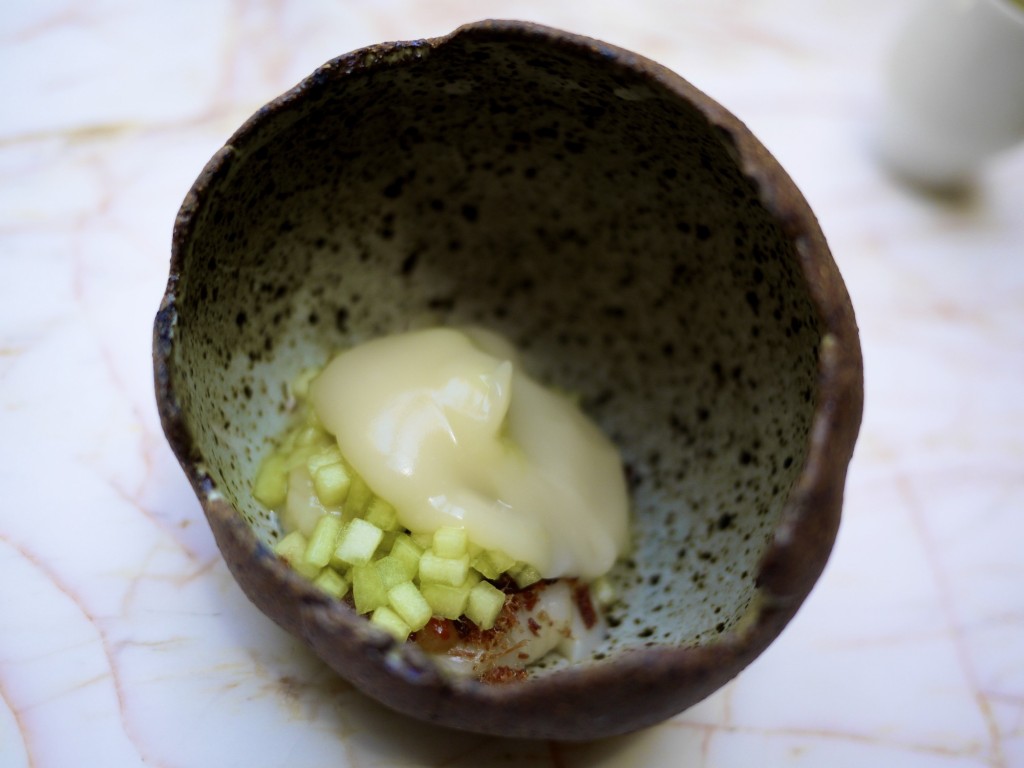 Fifth course – Scallop dressed with Jamon, dashi, honeydew and roe served with Naka Shuzo ‘Asahi Wakamatsu’ 2008, Tokushima, Japan. Another delicious dish, and one of my favourites of the day, again with flavours of the ocean, drawing out the umami with the jamon, dashi and roe. The honeydew was texturally pleasant but perhaps the sweetness of the scallop was slightly overshadowed by the natural fructose. The jamon and scallop was a classic match made in heaven. 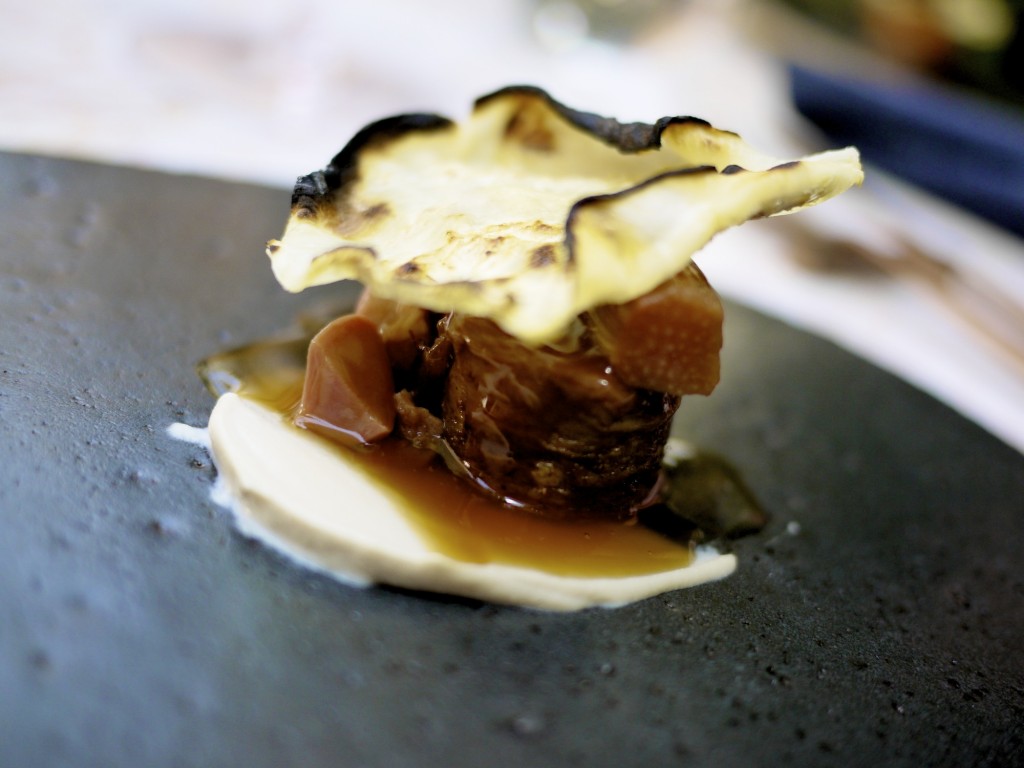 Sixth course – Saltbush lamb perfumed with cherry wood ash, macadamia cream and rhubarb paired with a 2012 Passopisciaro, Nerello Mascalese, Terre Siciliane, Sicily. This was another one of my favourite course. The lamb was perfectly executed, with a just a hint of smokiness, and was served on a creamy bed of macadamia purée. The slightly tart rhubarb cut through the rich and salty lamb well. 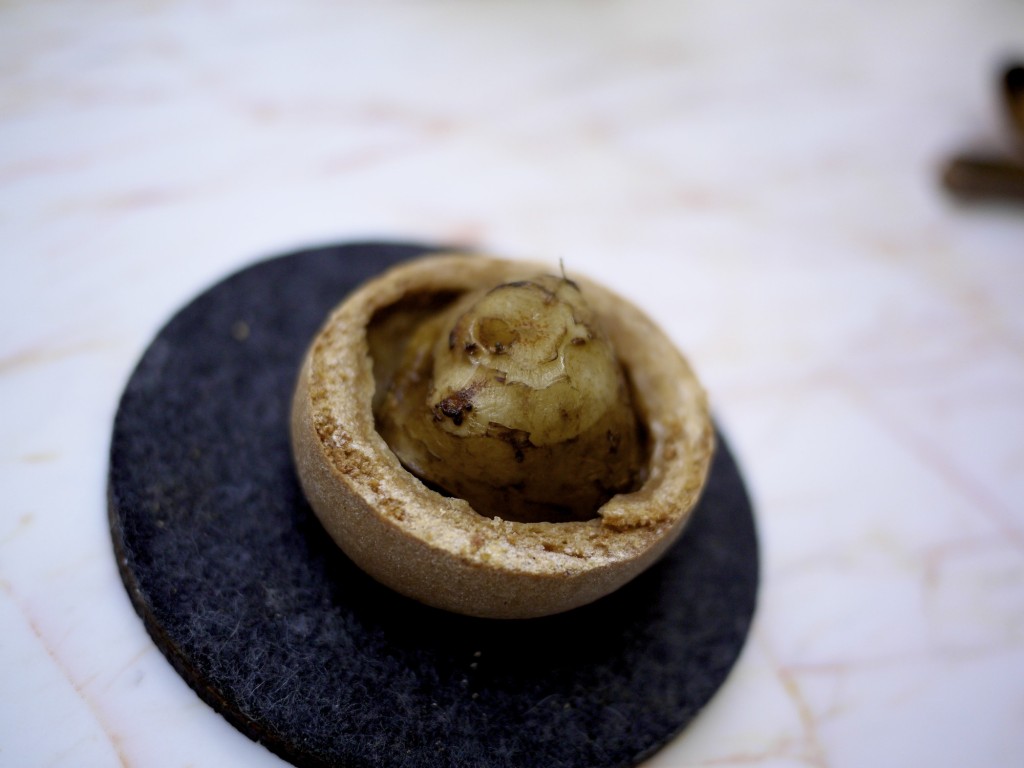 Seventh course – Jerusalem artichoke, La Sirene Parline and quince peelings paired with a Maidenii ‘dry’. I appreciated the jerusalem artichoke was cooked in a salt crust. However, despite best efforts to follow the instruction to not eat the salt crust, I did find the course just a bit too salty for my liking. I did however enjoy the texture which was not too dissimilar from a baked potato; soft and creamy. 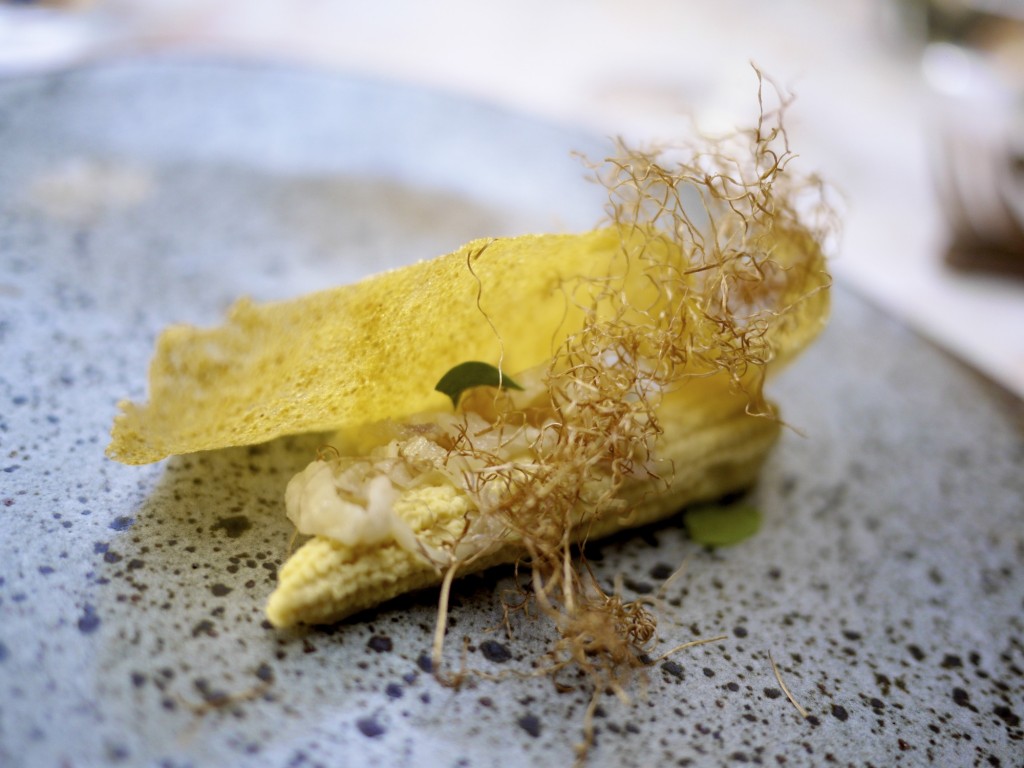 Eighth course – Sea corn and dairy cow paired with 2014 Sentio, Beechworth Chardonnay, Beechworth, Australia. Possibly another contender as the best dish of the meal and yet another visual trick. The ‘baby corn’ on the plate was actually crab that had been skillfully converted into a custard that was set in a baby corn mould. What appeared to be crab meat was actually salted cow udder that had been shredded and blowtorched. In fact the only true corn element on this dish was the crunchy fried corn silk. That’s right, even the crisp on top was made from polenta, not corn, though it tasted like corn. Whilst this may sound all gimmicky, trust me the flavours and textures really worked. 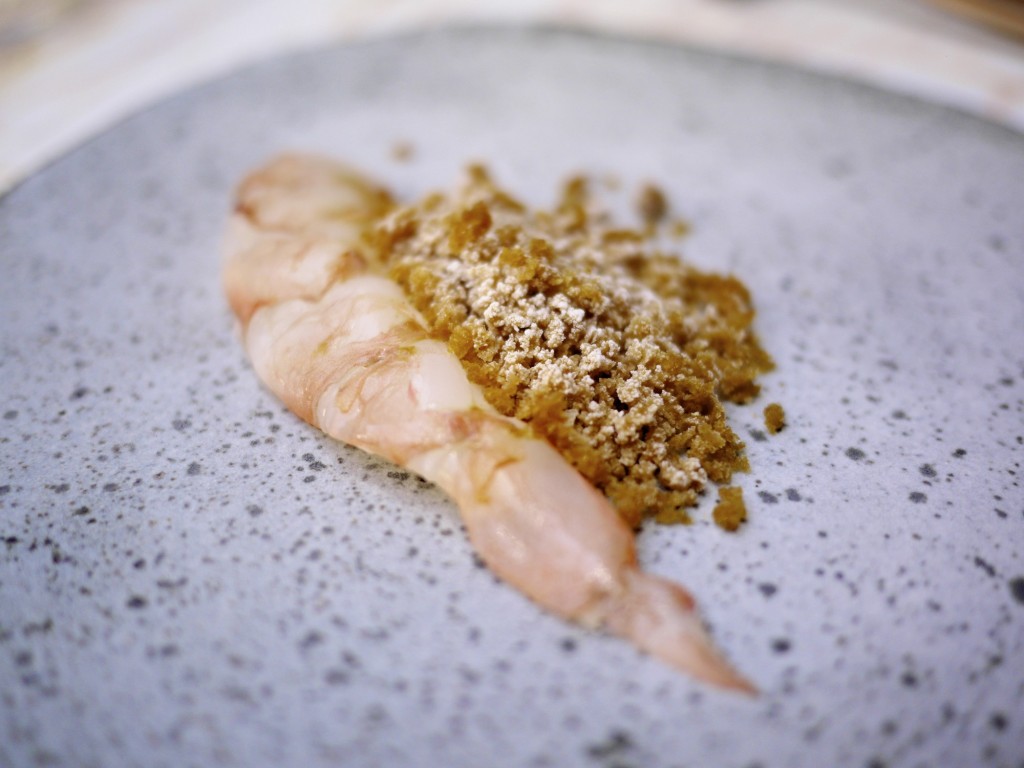 Ninth course – Raw barbequed prawn paired with Holgate Road Trip IPA, Wood End, Victoria, Australia. I was settling down my daughter to sleep at this stage and missed out on the introduction to the course as we explored the internal vertical herb garden, so many apologies for my lack of detail. What I did however enjoy was the marriage of the sweet raw prawn and the cold malt like granita that went down ever so well with the hoppy beer. 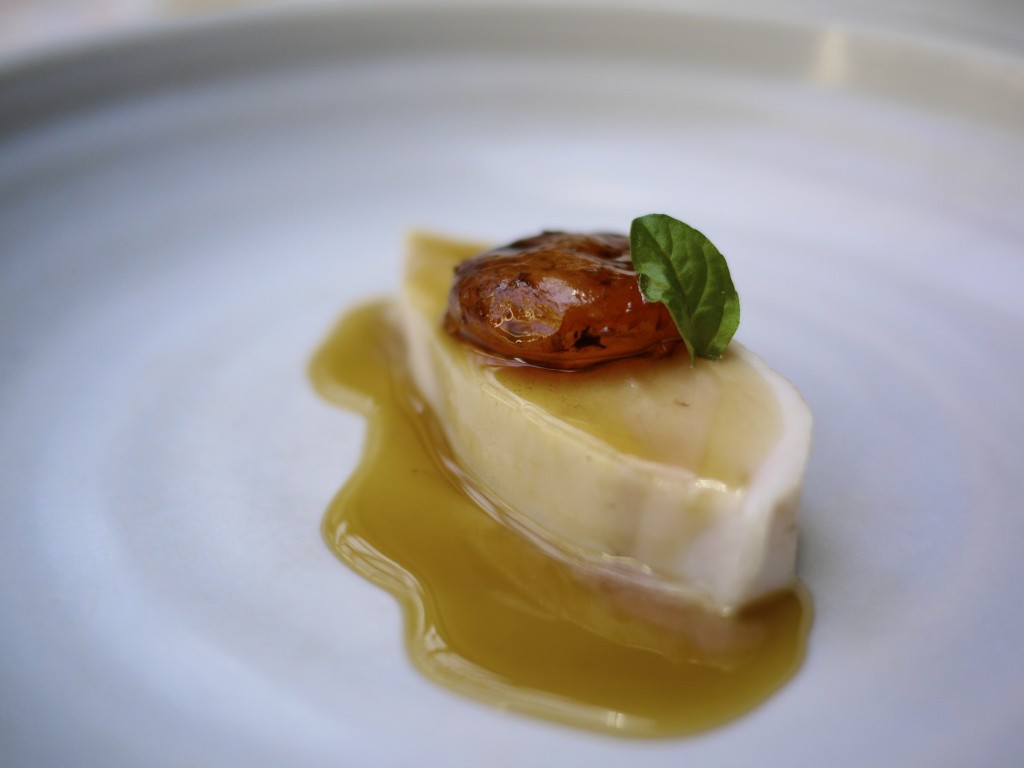 Tenth course – Hen cooked in chamomile, acidulated wild violets and salted yolk paired with Nakano ‘BC Chokyu’ 1999 Koshu, Aichi, Japan. Possibly the best chicken course I’ve had in Australia, cooked sous-vide in chamomile and served with a caramel-like salt cured yolk that just melted on the tongue. I’m still not decided on the pennyroyal juice as it had a hint of medicinal after taste but it didn’t distract the dish itself. Simple but perfectly executed. 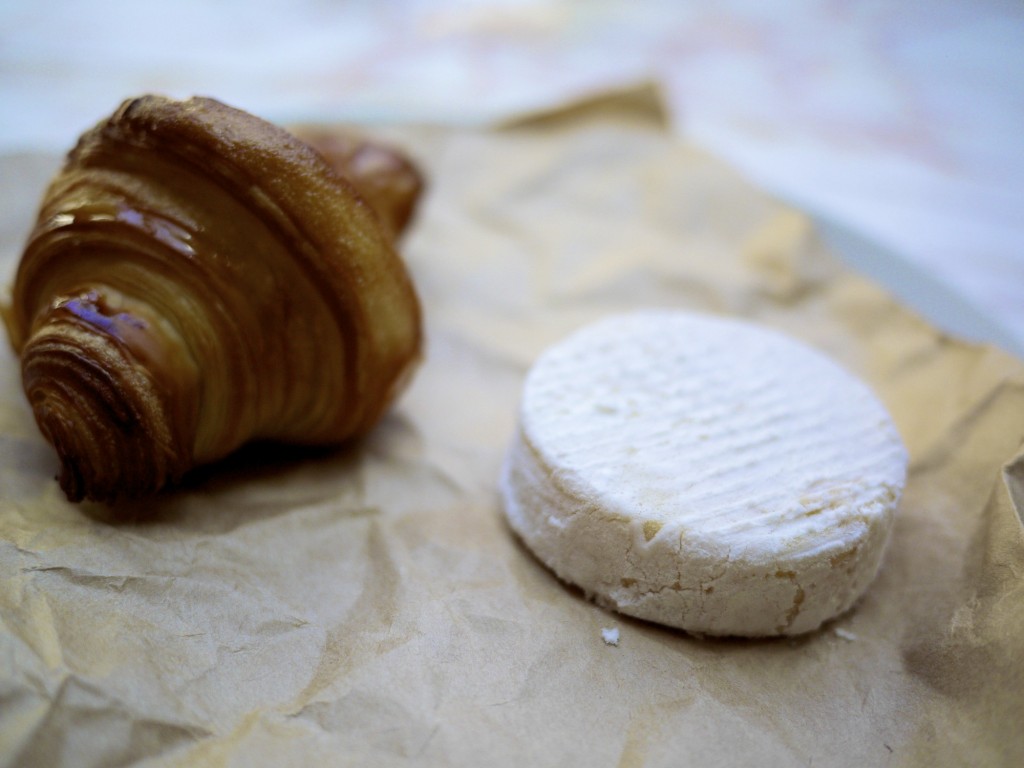 Eleventh course – Cauliflower cheese with a pastry smoked over pear wood paired with 2013 Heidenboden White, Claus Preisinger, Burgenland, Austria. One last illusory trick with what looked like a convincing washed-rind cheese turning out to be a rich cauliflower purée with parmesan oil served with a croissant. I liked the concept but did think the portion could have been smaller as I was over the cauliflower flavour as I scooped the last morsel on the croissant. The croissant was beautifully buttery and a delight to eat. 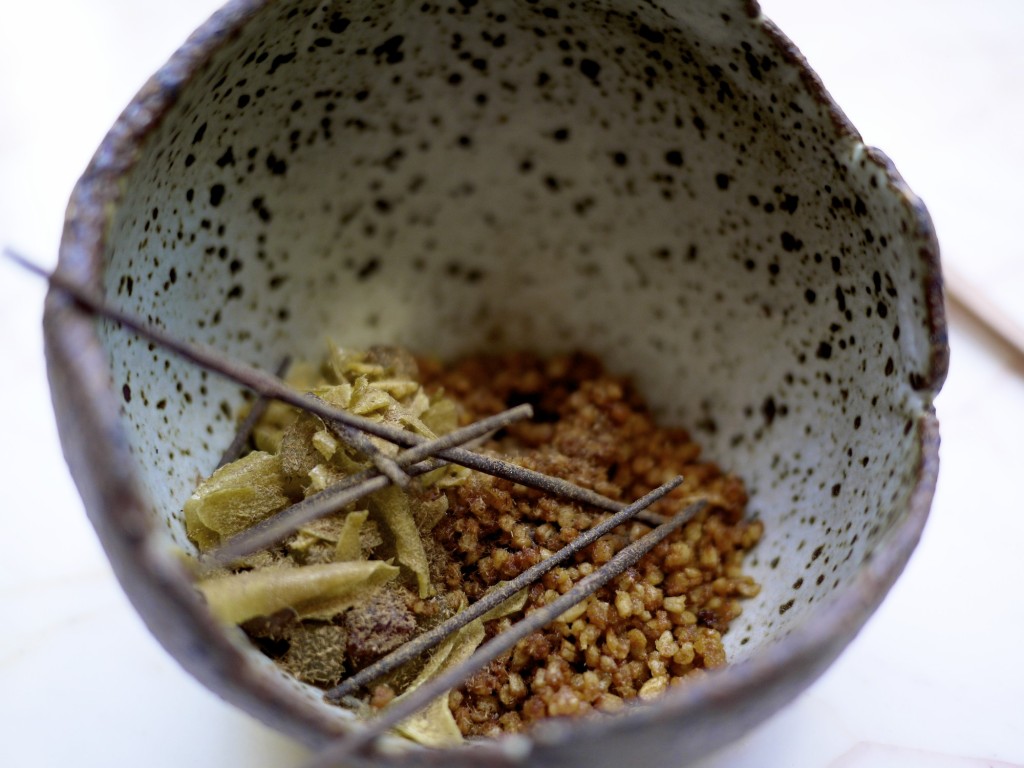 Twelfth course – Lambs blood ganache rolled in maple oats, native apple jam and riberry pepper paired with Custard & Co. Barrel Cider liquor 13 years old, Donnybrook, Western Australia. Come again? Yes that’s right, lamb’s blood. Nothing was out of bound and I liked the fact that the chefs were happy to push the culinary boundary here. The dish represented a transition from the savoury to sweet courses, where black pudding met apple crumble. I thought the textures were pleasant from the crunchy maple oats to the candied apples. 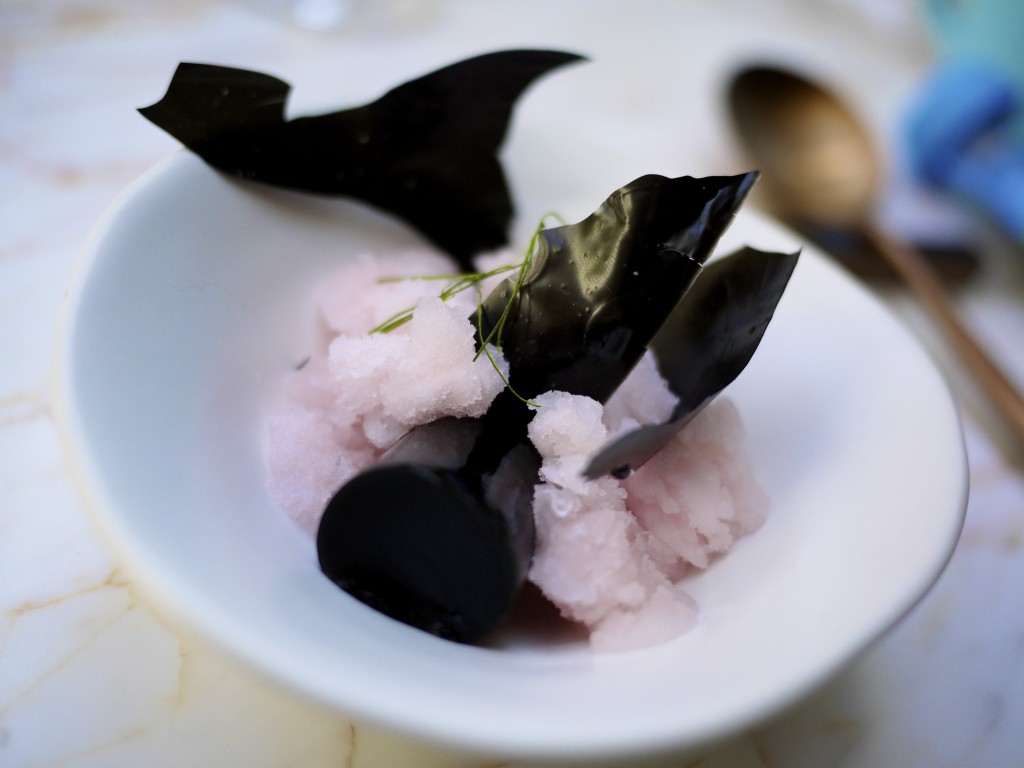 Thirteenth course – Liquorice, violence and lime. A very pleasant palate cleanser and despite not being the biggest fan of liquorice I thought it worked well. The liquorice flavour was ever so light and the refreshing note of lime was key here. 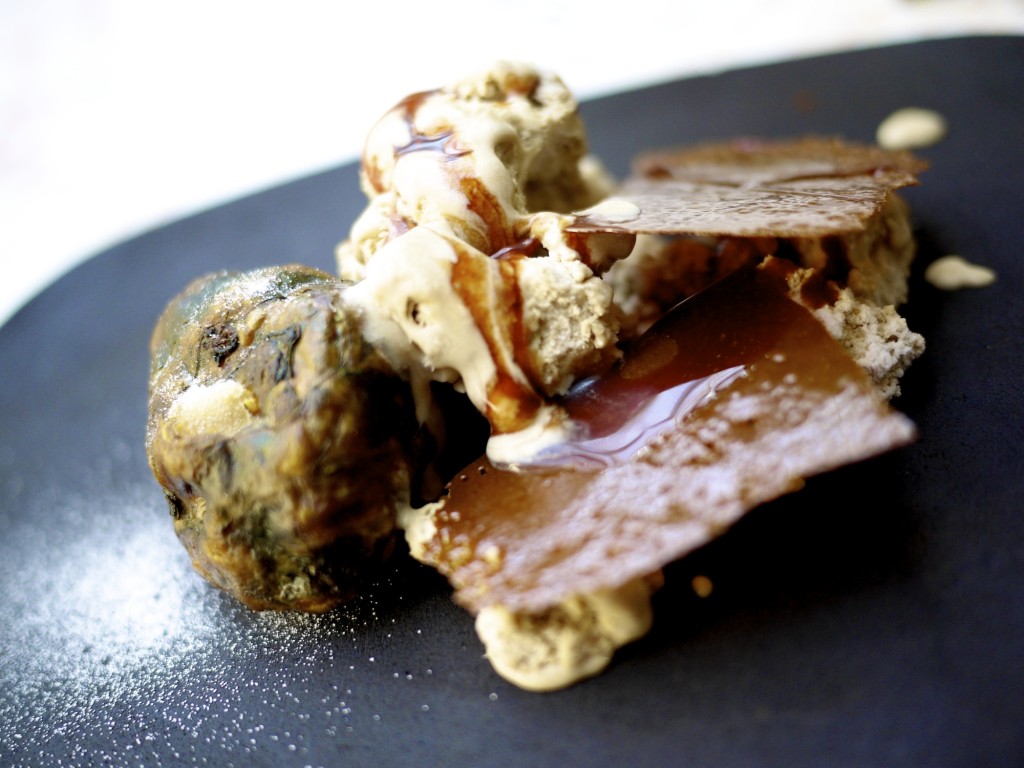 Fourteenth course – Jerusalem artichoke, La Sirene Praline and quince peelings paired with a local stout brewed with vanilla, hazelnuts and Mexican cacao charged with a splash of Romate Iberia Cream Sherry, Jerez, Spain. This was a very brave dish as the penultimate course… and I absolutely loved it. The ice cream was made from a local stout brewed with vanilla pods, hazel nuts and cacao nibs. It was gooey, rich and a novel flavour combination. 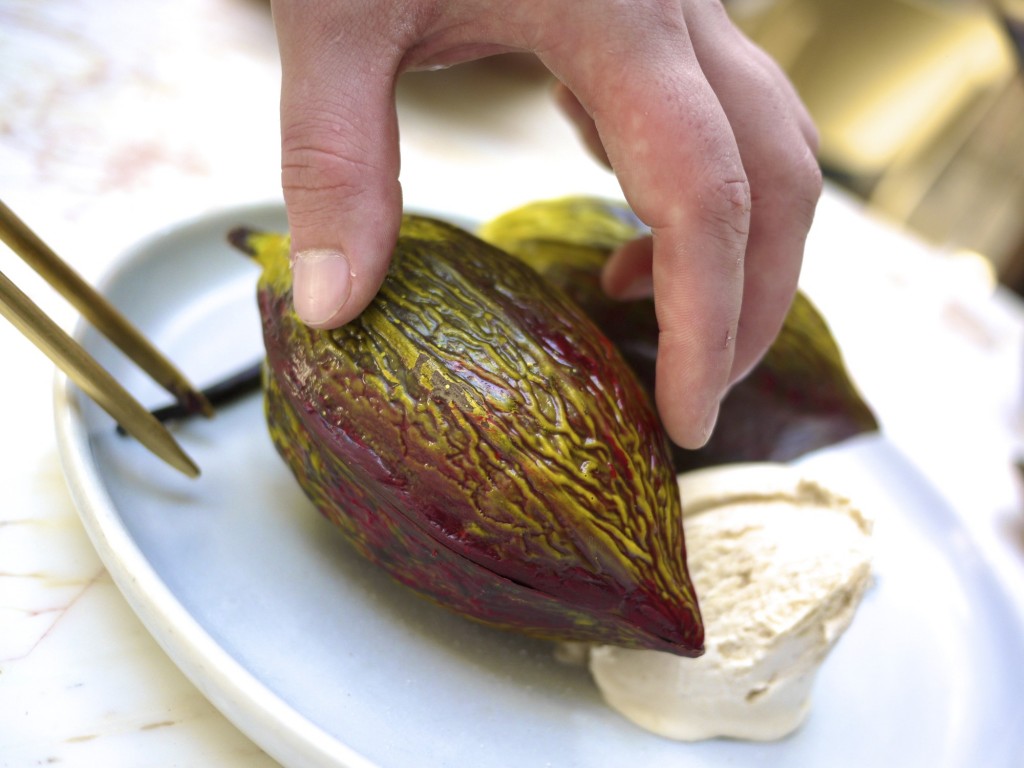 Fifteenth course – Cacao pod from Maralumi with notes of tobacco, green banana and currants paired with 2014 Simão & Co, Alpine Valley, Victoria, Australia. Our waiter proceeded to assemble the last course by placing what appeared to be vanilla beans, ice cream and a large cocoa pod made of chocolate on the plate in front of us. 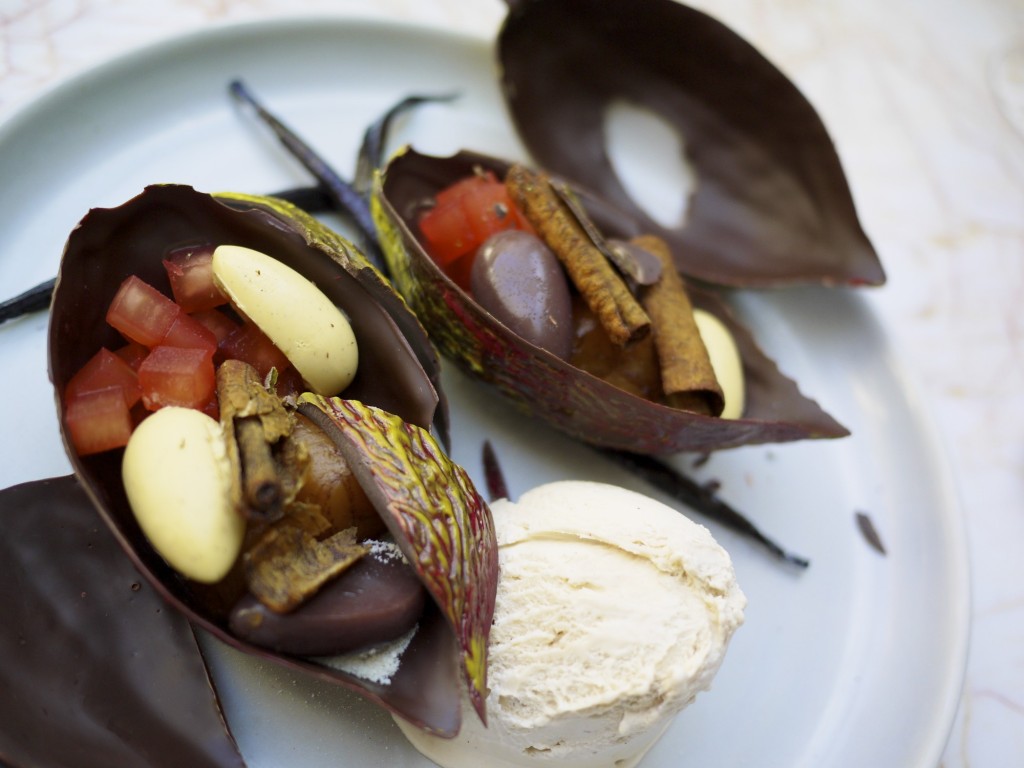 The chocolate pod was smashed to reveal several goodies including currant jellies, tobacco wizz fizz, orange crema catalana and Granny Smith apples compressed in strawberry syrup and absinthe. The “vanilla pod” underneath was my favourite item as it was actually vanilla poached rhubarb juxtaposing tart and sweet flavours as you chewed it. The whole dish was quite a show stopper.

It would be premature for me to say that Lûmé will become a culinary destination but it certainly shows great promise. The chefs are talented and their creative dishes do not compromise on flavour. What’s more, the price is very reasonable compared to other fine dining establishments in Melbourne producing similar caliber dishes. The staff are equally knowledgeable and enthusiastic as the front of house at Attica. Only time will tell if they can continue on this trajectory. I for one am glad they are only ten minutes away from my new home.