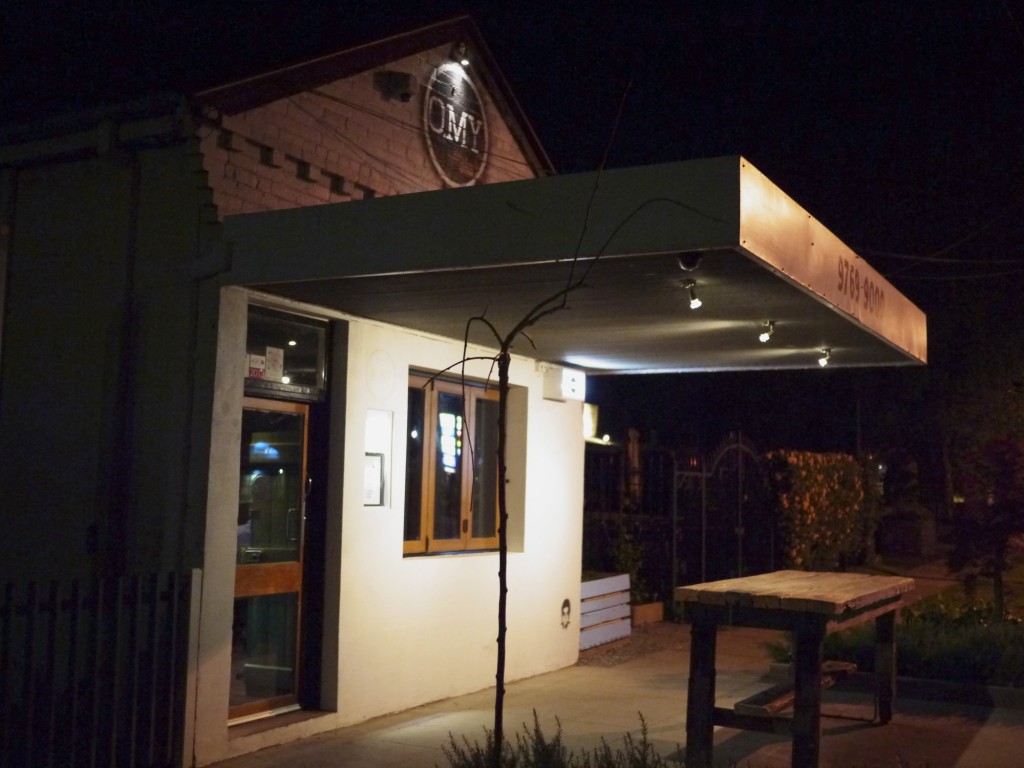 I wouldn’t trade anything for the 20 acres of land my wife and I currently live on east of Melbourne, but living an hour outside the city does come with some drawbacks; namely the proximity to a fine dining establishment and therefore the limitation to the amount of wine one could consume as taxi is certainly out of question. I was therefore genuinely surprised to hear from a local foodie only last week that there was a new fine dining establishment only 15 mins away from us. It offered degustation menus only and made reference to their own vegetable garden. It sounded exactly like the type of place my wife and I love. The rest is pretty much history. A reservation swiftly ensued the same day and we had a booking for later that week. 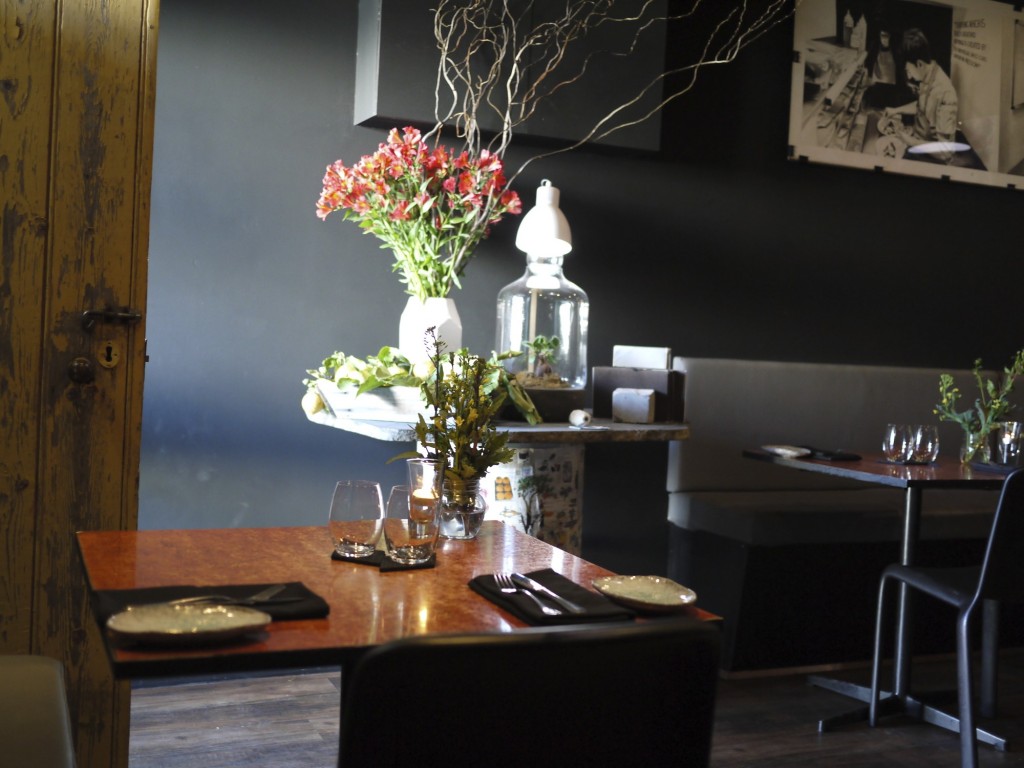 The restaurant is housed in an old building that had previously served as a butchery. The two brothers, Tyson and Blayne Bertoncello, transformed the interior into the type of funky modern restaurant you’d stumble upon in central Melbourne but not usually in Beaconsfield. The two brothers are today joined by their up and coming sommelier and younger brother Chayse, and supported by a handful of passionate and friendly front of house staff who are equally professional and attentive. 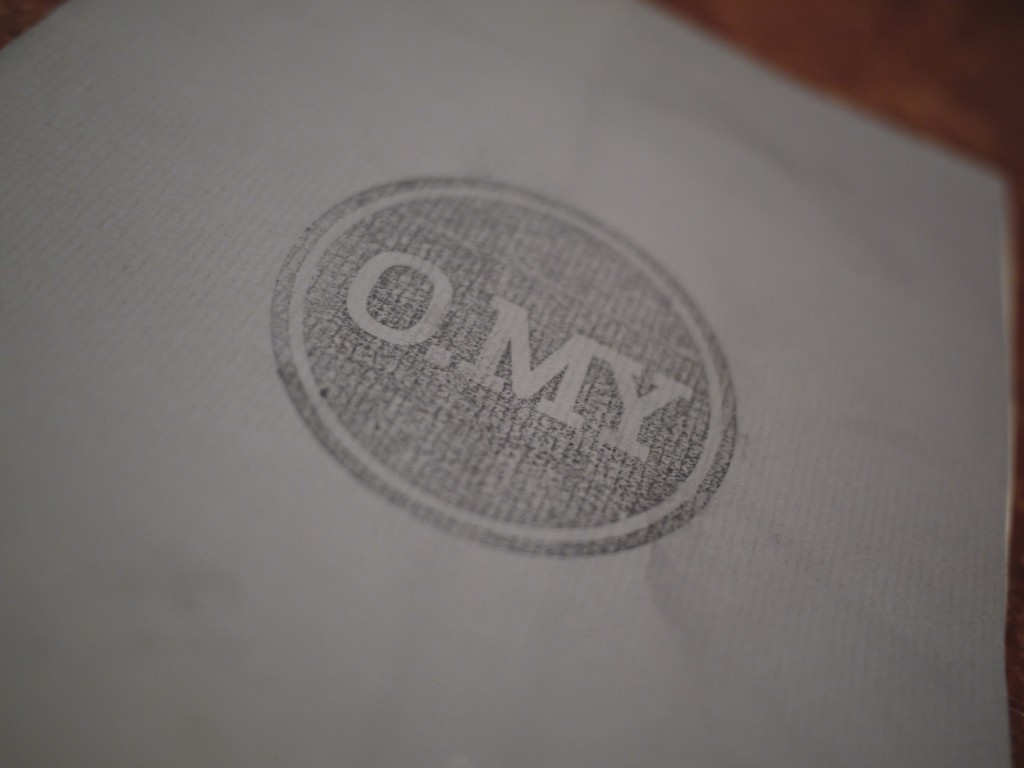 The restaurant only opened 18 months ago but appeared to already have a a loyal group of followers who have sworn by the degustation menu. Caving into their diners demand, they’ve done away with the à la carte option, which in hindsight makes much more sense given their menu is entirely dependent on the harvest of the day. It certainly takes a lot of skill, experience and creativity to adapt to the availability of the produce and ingredients every day. As expected, we opted for the extensive 8 course menu, coming in at a very modest $100. I even managed to get a half pour of wines matching my menu. Perfect. 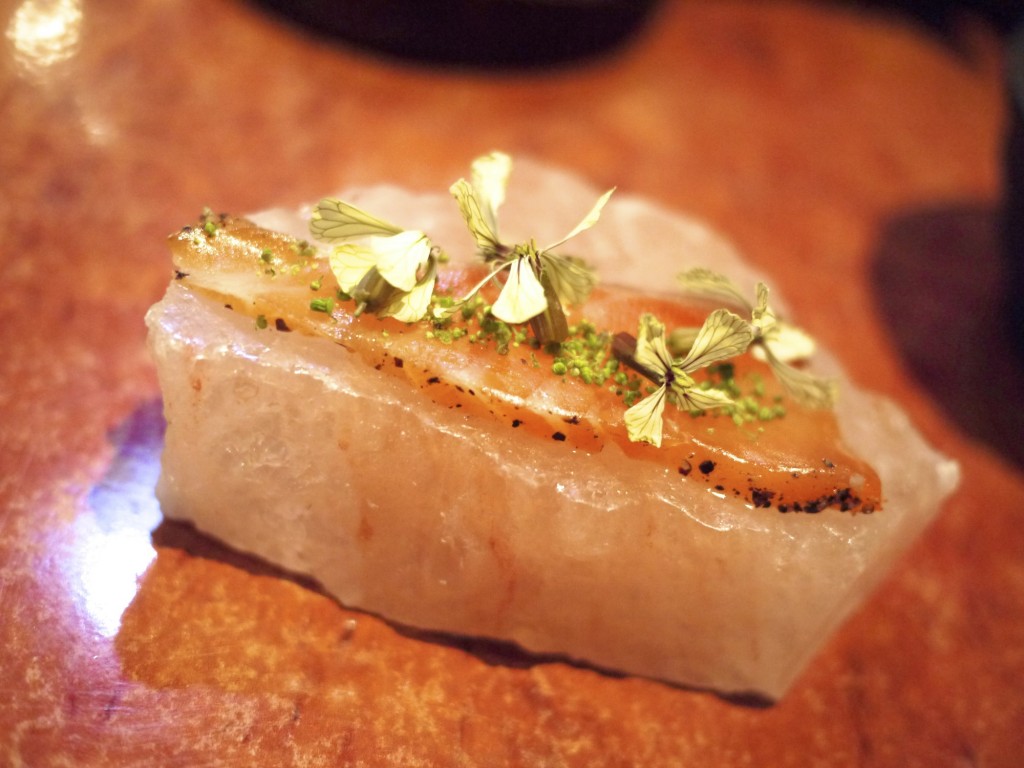 Our meal commenced with an array of savoury amuse bouches that was served with a glass (or rather half in my case) of one of our favourite Dominique Portet Brut Rosé NV, Yarra Valley. First up was a Salmon pastrami, angelica seeds, rocket flowers which had a good level of heat and salt to whet the appetite. 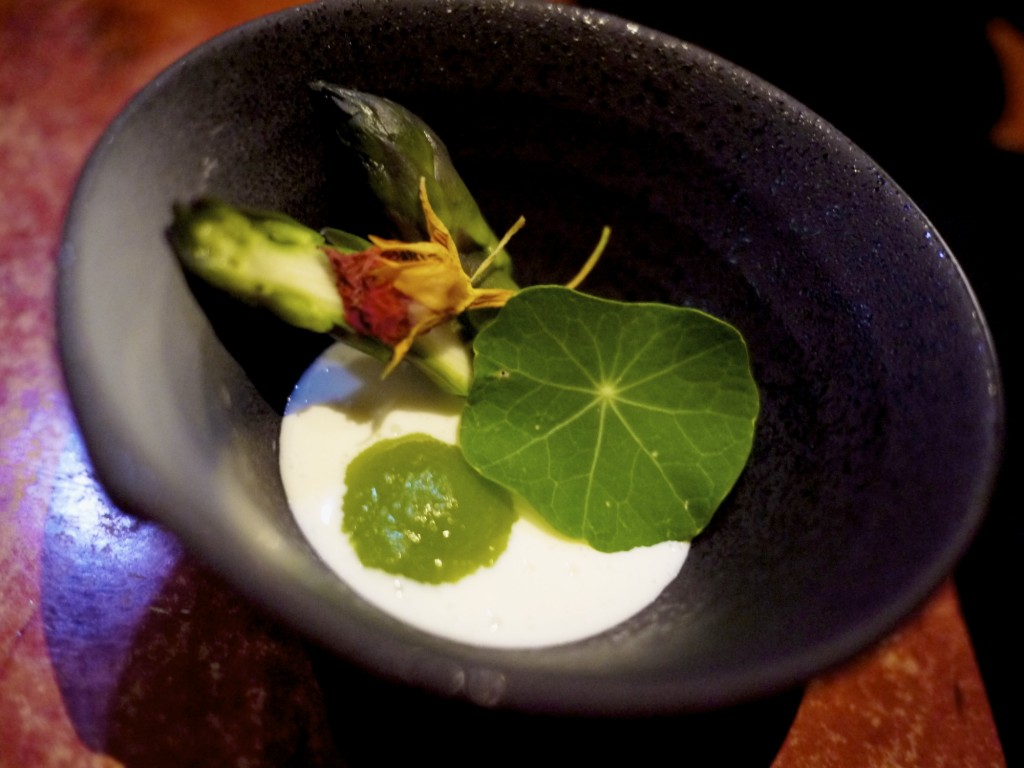 Up next were some fresh and crisp Asparagus, yoghurt and nasturtiums. It was a good way to showcase the quality of their own produce. Good crunch to the asparagus. 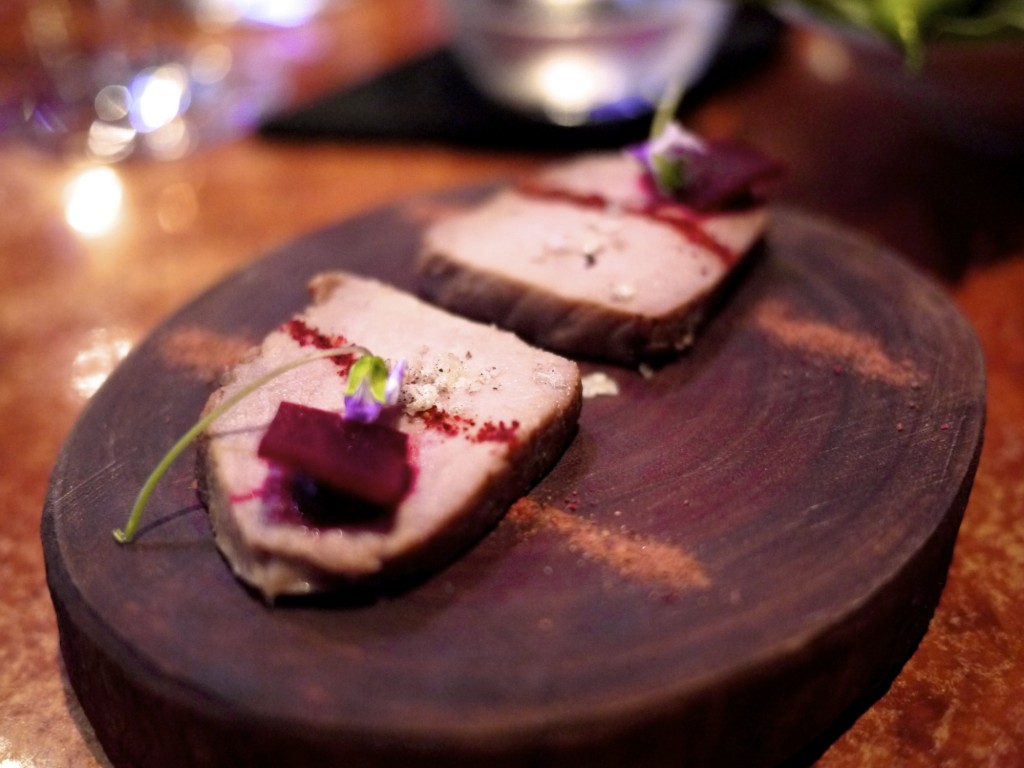 A couple of slices of Smoked venison, beetroot / pickled that had been prepared sous-vide. I was particularly surprised to find that the beetroot powder had such a nutty flavour and there was initially some discussion between my wife and I as she was initially convinced it was a spice mix of sumac and nutmeg. It went particularly well with the smokey venison. 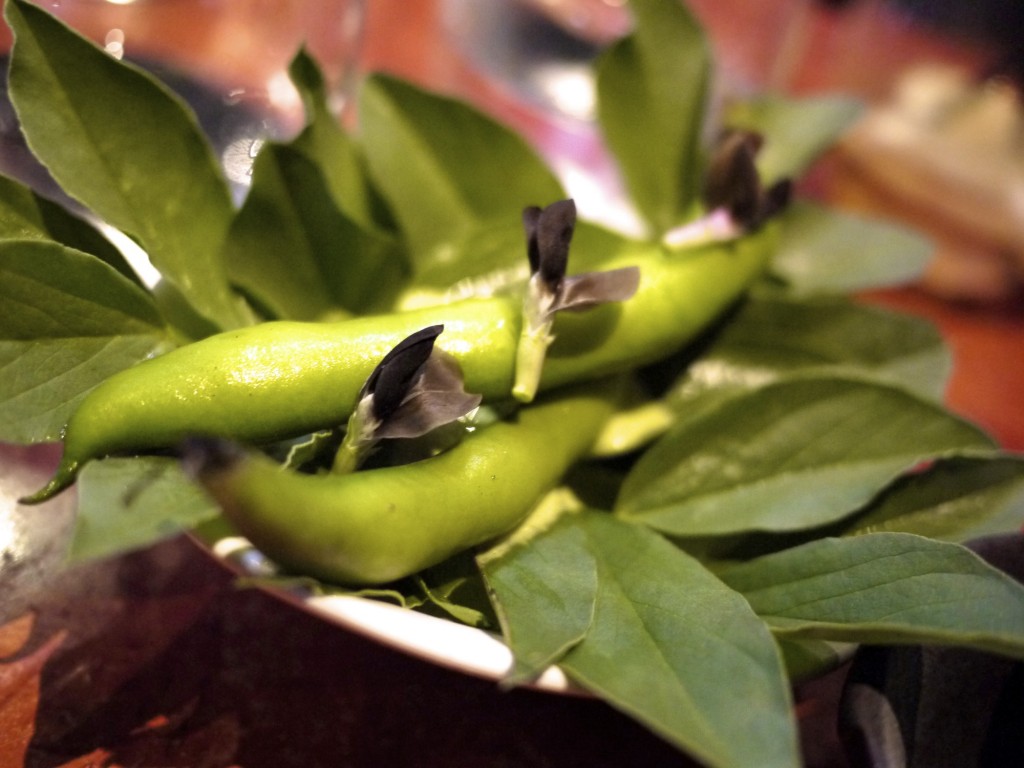 The last of the amuse bouches was all about the Homegrown broad – beans, leaves, chervil flowers, vinaigrette, broad bean purée. You really needed to be confident in your own produce to serve such a dish but it worked well. Everything on the plate was edible. Despite its simplicity, I thought it was quite clever using texture and flavour contrasts from the sweet and crunchy beans to the sharper vinaigrette and smooth purée; all whilst showcasing the freshness of the produce. 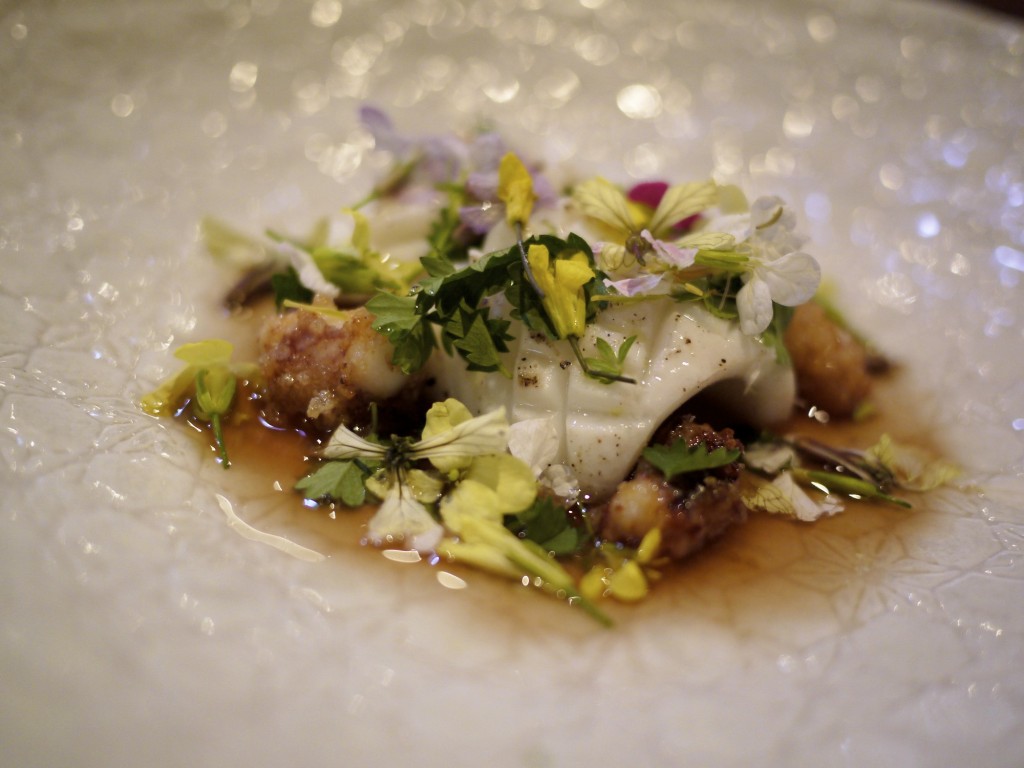 Our first official course of the evening of the Steamed squid, fried squid tentacles, squid stock, burnet leaves, edible flowers, lemon herb oil went on to demonstrate that the food here wasn’t only about the quality of the produce but equally about the skill that went into the cooking. The crispy fried squid tentacles were particularly enjoyable with the stock. The only thing I wasn’t quite convinced with were the edible flowers which looked pretty but, on balance, I felt added little in terms of flavour. 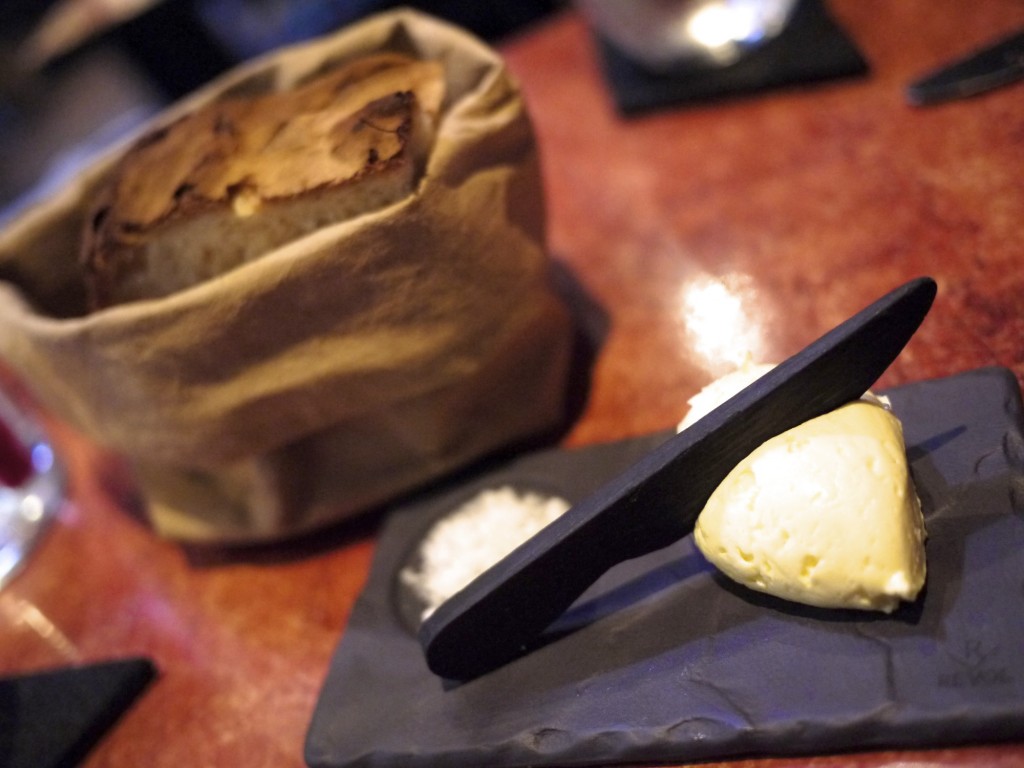 I had mixed feelings with the Home made bread and butter. The bread hardly contained any salt and I found it rather dense, almost like damper. However, there was a interesting smokiness to its crust. The butter was also very creamy and delicious, and its application with a pinch of salt on the bread worked well. 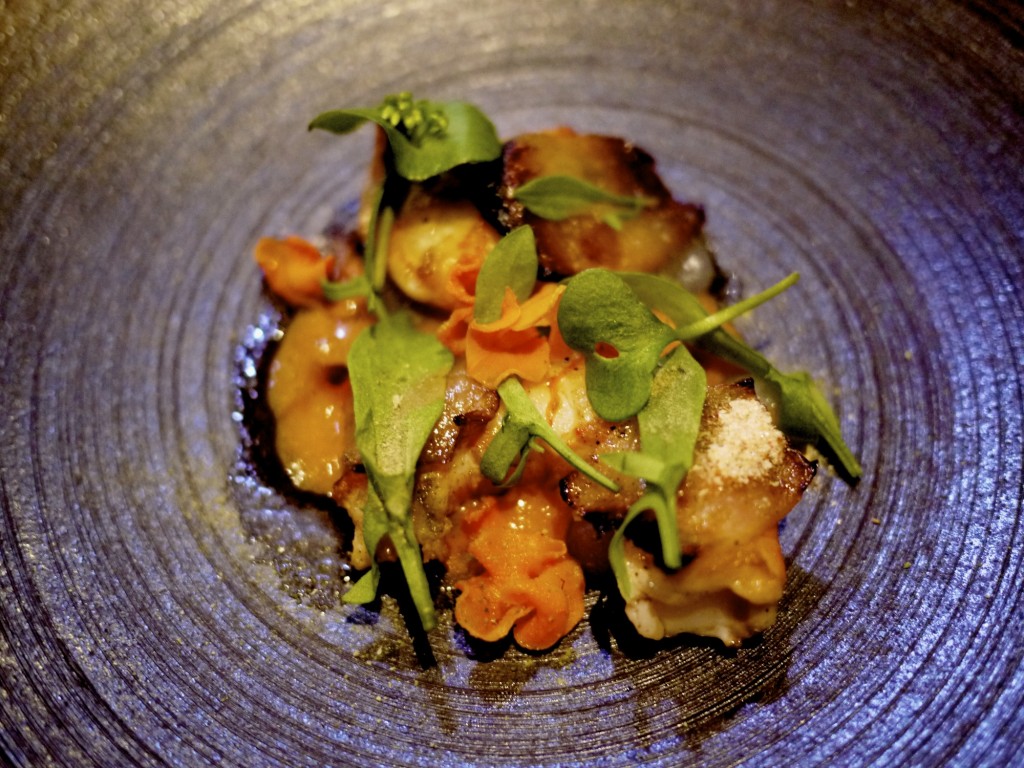 The bread did however come handy to mop up the delicious thick jus left from the Prawn seared, oil shell salt, onion shells in prawn oil, lemon gel, carrot sauce, carrot raisins, chive flowers, sheep sorrel, Miner’s lettuce. The lemon gel provided a subtle but sufficient amount of fresh tangy notes to the prawn, thick jus and caramelized onion shells. The miner’s lettuce, essentially a succulent, burst with a salty juice as you bit into it to dress the sweet prawns and the crunchy carrot added that textural dimension. The dish was matched with a glass of 2013 Valere, Riesling, Mansfield. 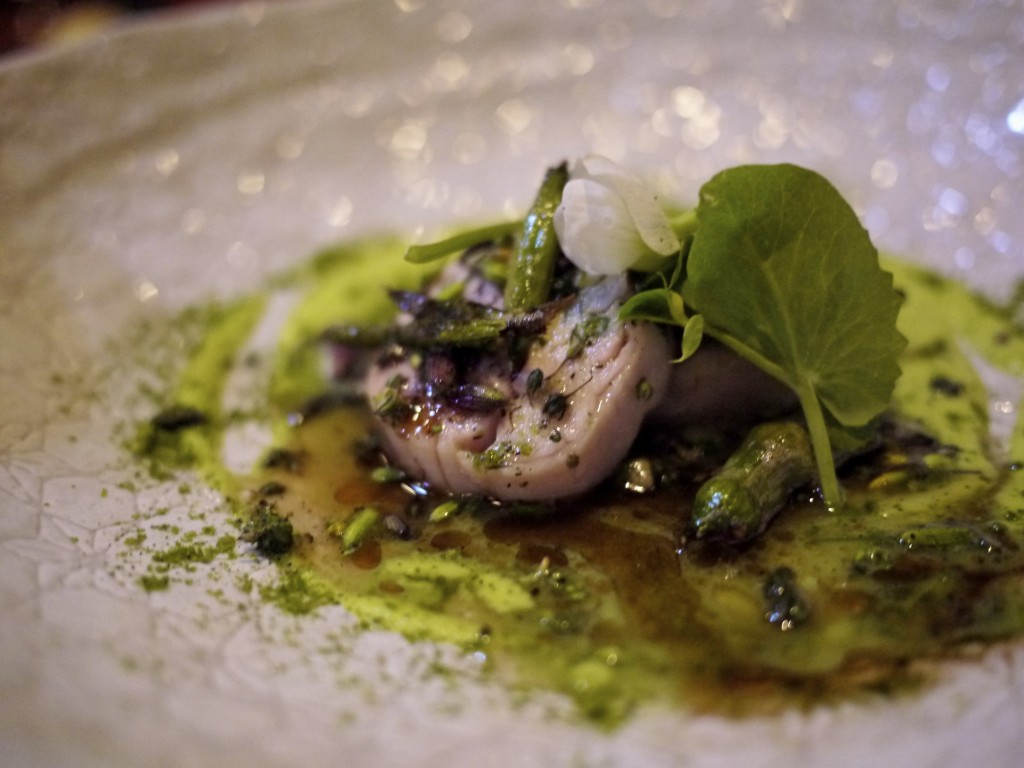 One of my personal favourite that evening was the Chicken thigh, white chicken sauce, pea purée, pea pod juice, baisted seeds / peas, seed granola, pea tendrils and flowers. The chicken cooked sous-vide in a rocket purée had an almost raw like texture but was perfectly cooked. It was an odd sensation in the mouth but the flavours were superb. The mouth feel was balanced by the crunchy garden granola made from a variety of seeds and seed pods. One of the best and surprising wine pairing of the evening was the 2011 Witness point, Pinot Noir, Yarra Valley. 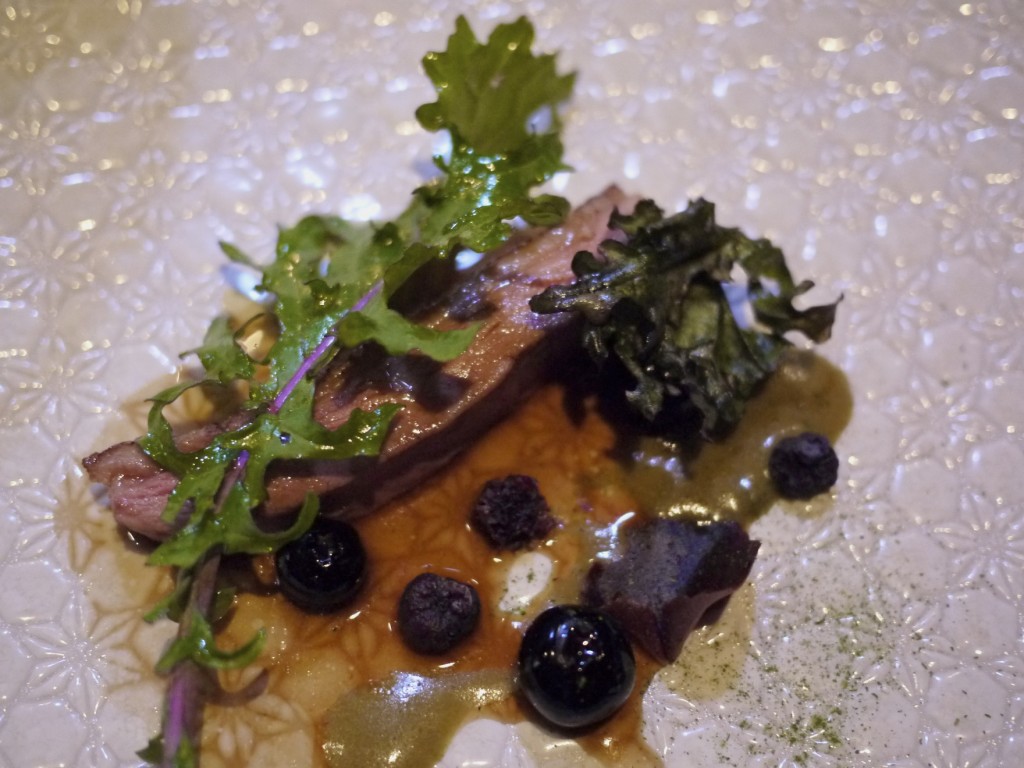 There was a change of pace and a brief pause before the Duck breast, begonia leaf, blueberries dried and fresh, duck jus, fresh kale served four ways in vinaigrette, flowers, sauce and fried was brought out. I absolutely loved the thick sticky jus and the dehydrated crispy fried kale chips though I did prefer my mallard to be served slightly more rare. I blamed it on my wife’s influence, given she was in her 39th week of pregnancy, as I suspect they had adjusted the cooking time for her requirements. 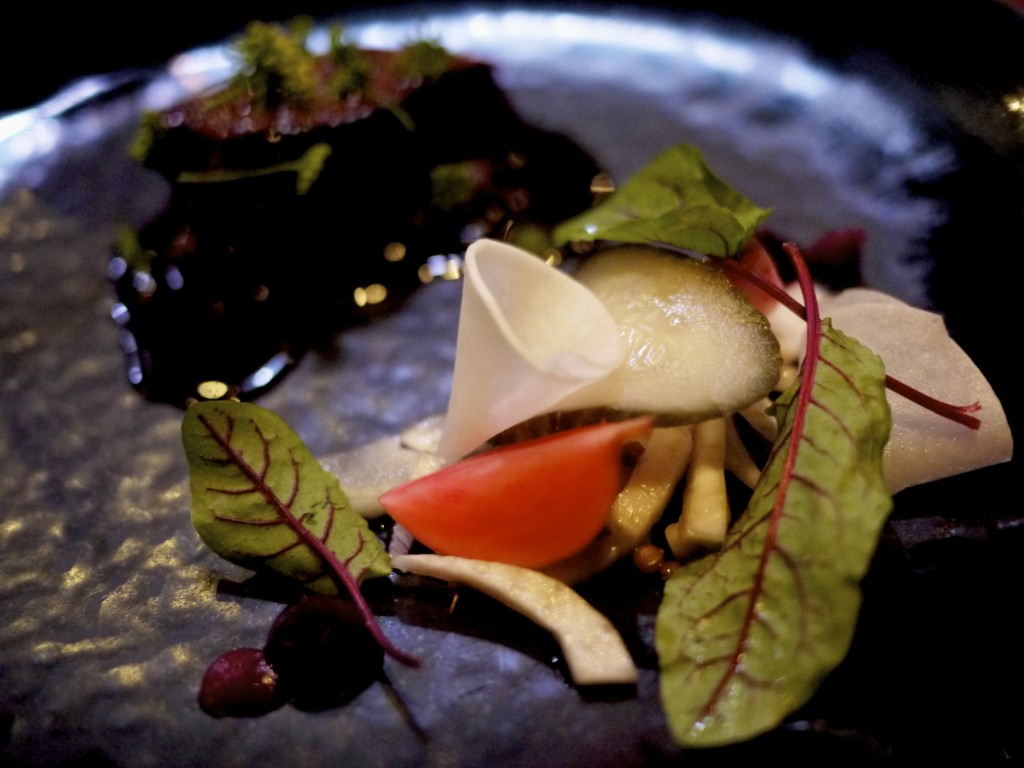 The  slow cooked Beef cheeks, braised red cabbage, radish, pickles, mustard seeds, beetroot was in my opinion two dishes that had been forced together. The pickles, been made and preserved from an earlier harvest from their garden, were spectacular with a superb level of crunch and sourness which I could have eaten on its own. The addition of… 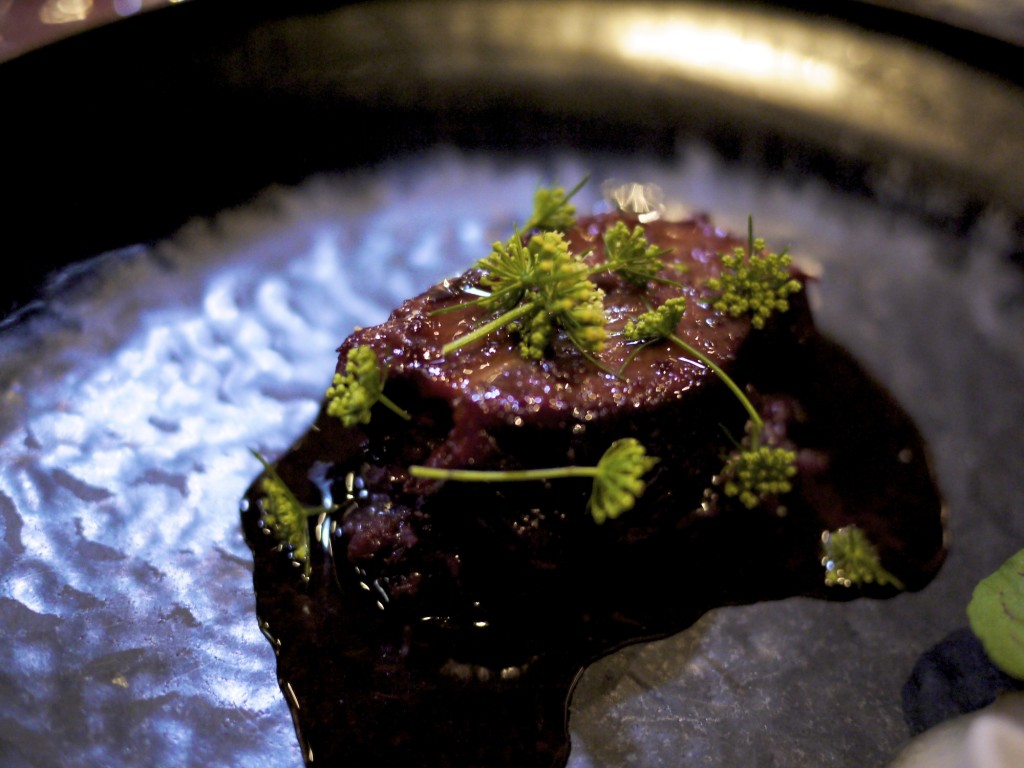 … the slow cooked beef cheeks sourced from their local butcher for me was unnecessary, albeit delicious on its own as well. I just found the sweet sticky glaze and the sour pickles a little mismatched in flavours.

In comparison, the last savoury dish of the evening was another cracker of a dish with the Pork neck, cheek, apple tapenade, granola, apple compressed and powder, nasturtium leaves and flowers, pork crackle and jus. As with all their meat, the pork had been cooked sous-vide to retain the flavours and moisture. The charred cheeks with its smokey notes just melted in your mouth with hardly any effort, but the neck was by far the best cut with its perfect fat-to-meat ratio. The crackling, which I normally get excited about the most, could have done with a tad bit more salt but the texture was decent. 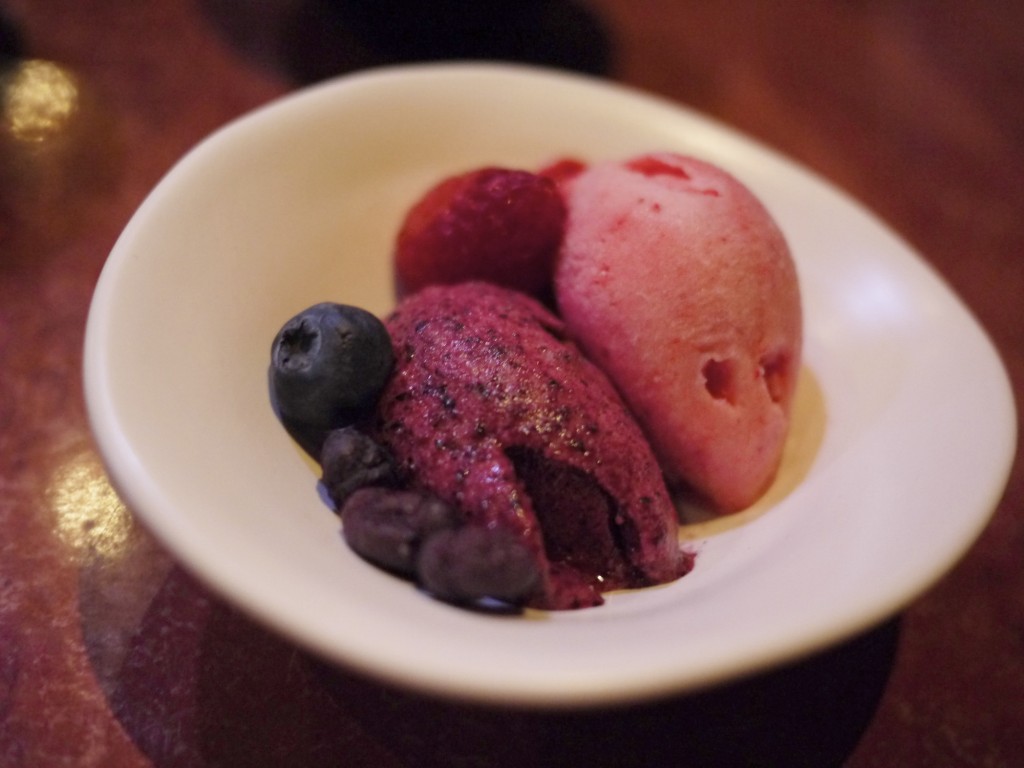 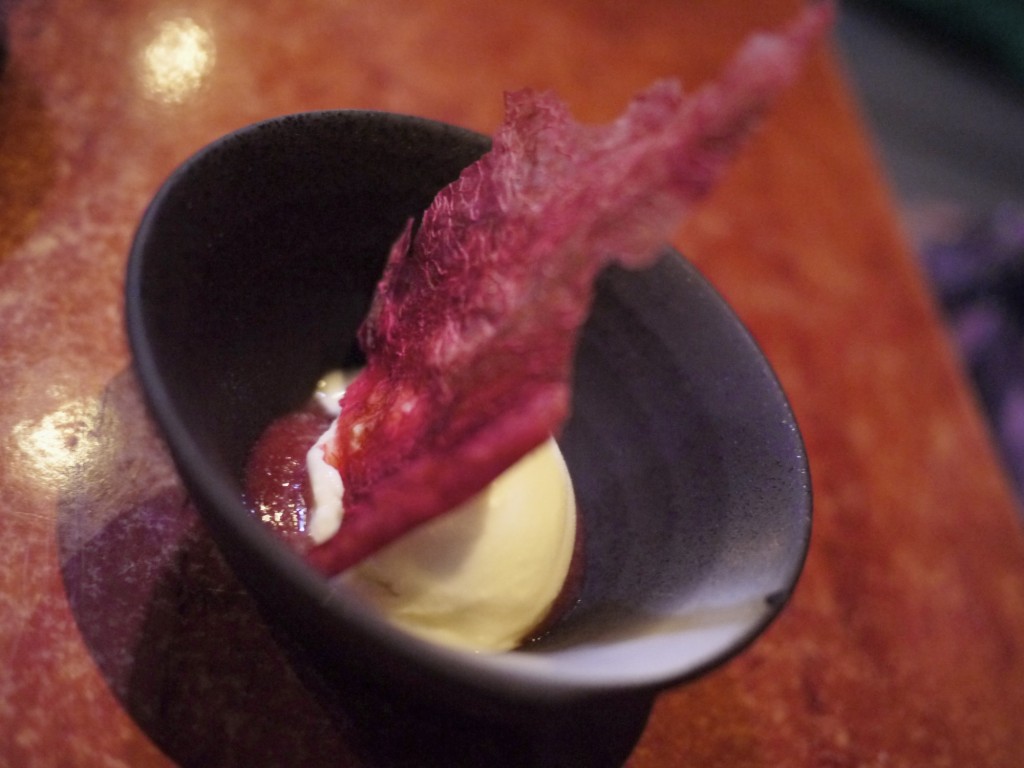 A very sweet and creamy Buttermilk sorbet and rhubarb shard…. 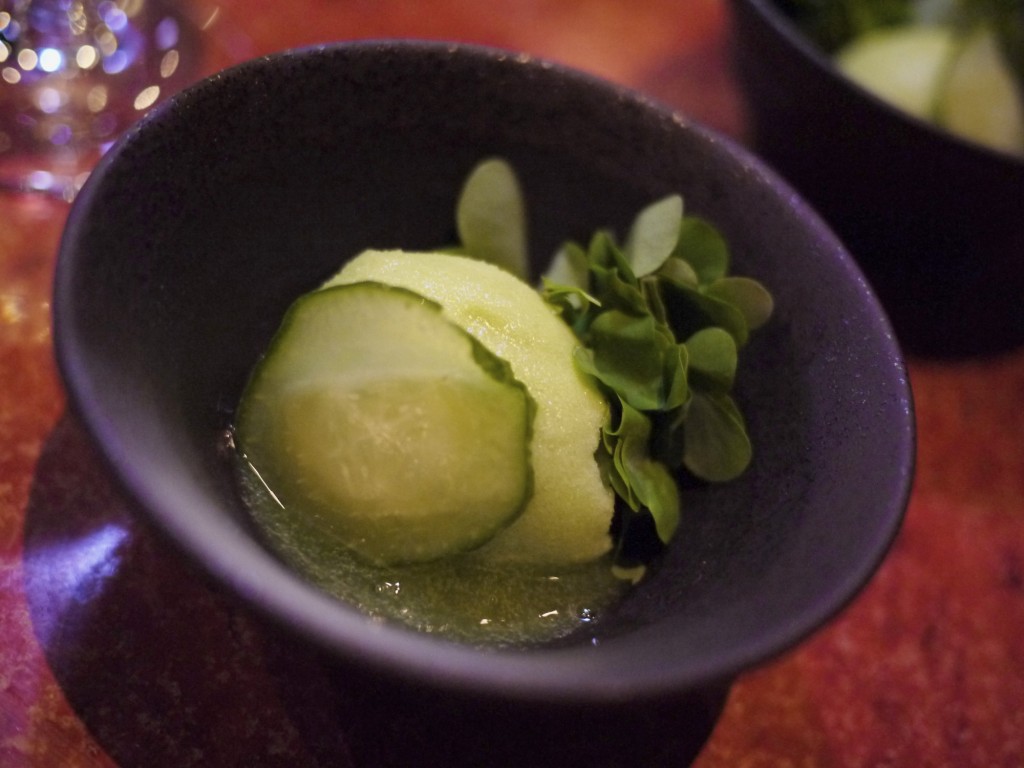 … and finally a refreshing Cucumber sorbet and oxalis. The oxalis was slightly tangy yet strangely sweet with the sorbet. It was definitely the most interesting of the three. 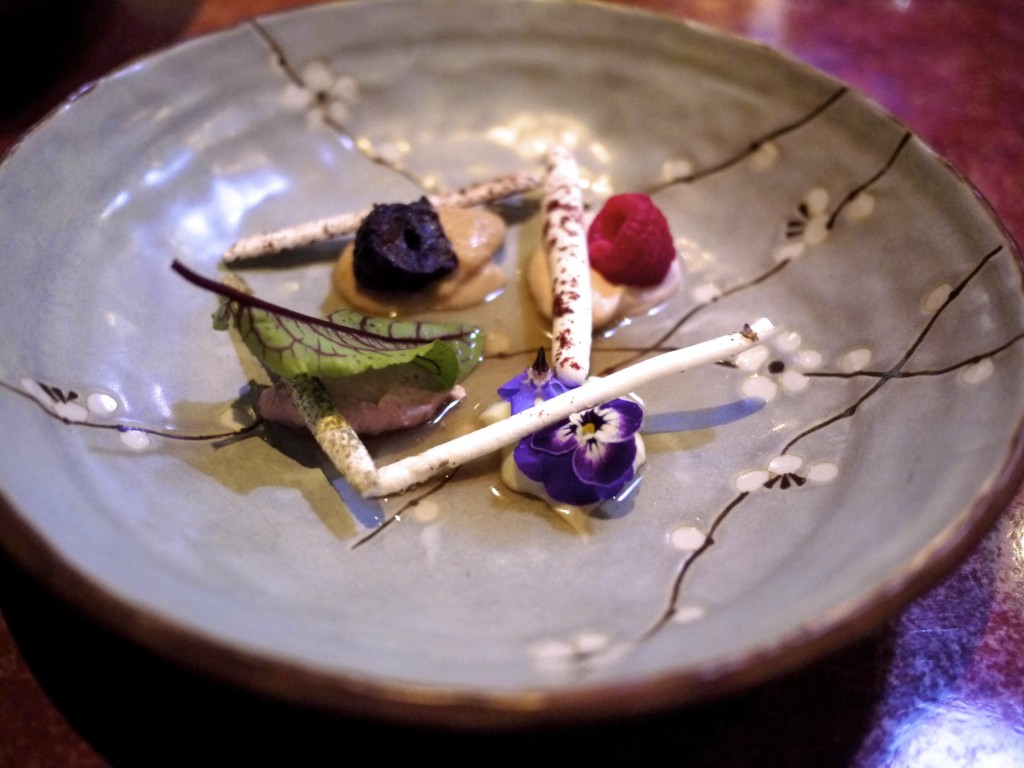 We unanimously agreed that the Infused creams of prune, raspberry, wild flowers, red vein sorrel with concentrated prune jus and meringue sticks was the best dish of the evening although we had different opinions about the components. My wife’s favourite was the caramel like flavoured prune and infused meringue but I thought the tobacco and chocolate like flavoured sorrel meringue was ingenious and hands down the winner. We agreed to disagree on the minutiae but overall we both agreed the dish was superb. 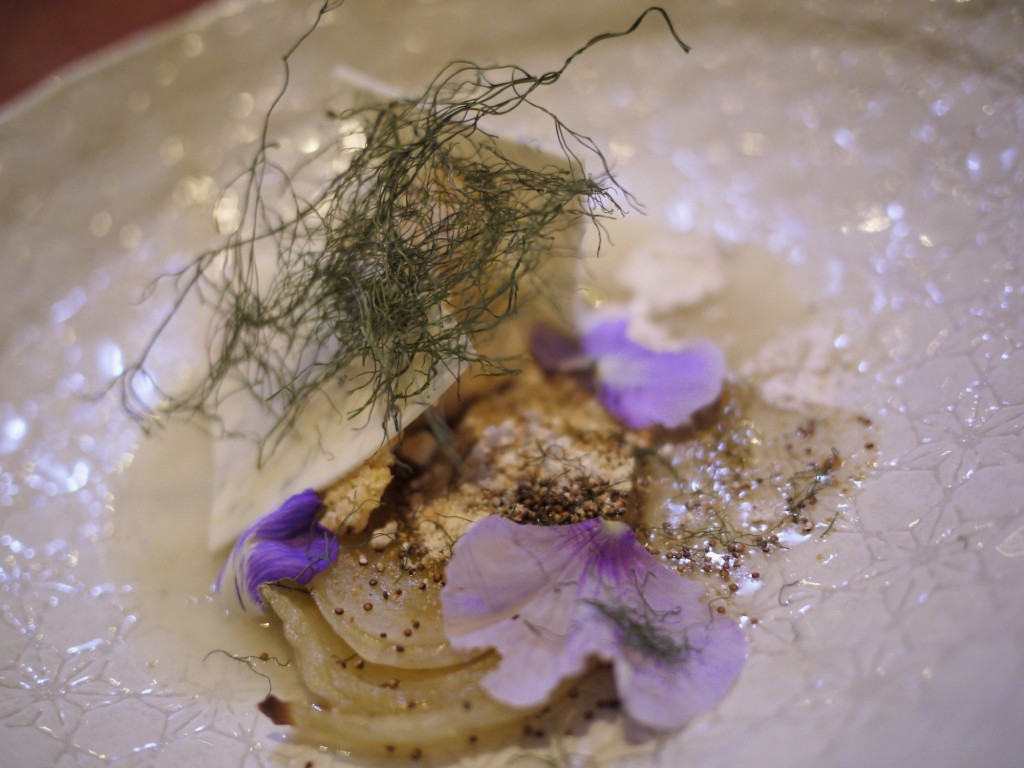 The finale was a rather bold and daring dish of the Cauliflower ice-cream, powder and candied cauliflower, fennel candied, dried, syrup with lemon and fennel, and fennel with white chocolate shard, puffed amaranth. The key to this dish was the balance in the flavour of the fennel and cauliflower. Ultimately I thought the dish could have benefitted from less fennel as its sweetness overwhelmed the plate. However, I did enjoy the flavour combination of the two unconventional elements in a dessert. What I particularly loved about this dish was the candied cauliflower that had the flavour and texture of a brittle vanilla tuile. A slight adjustment could make this dish perfect. 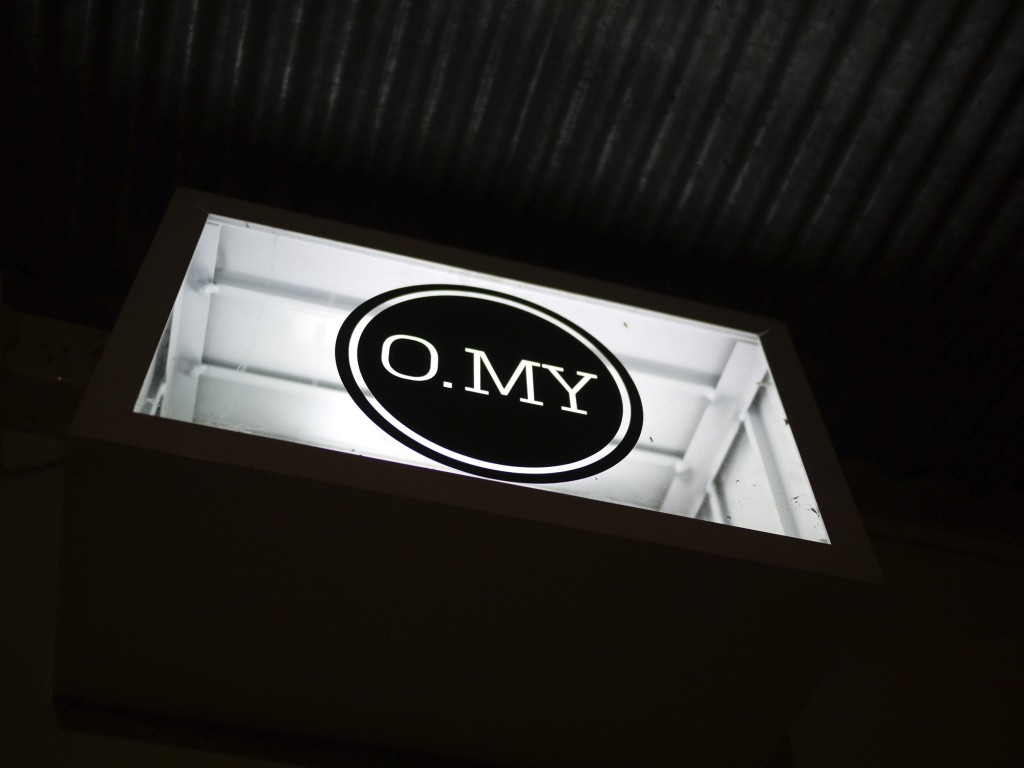 Our experience at O.MY certainly lived up to the expectation. Whilst the food in general was great, it was the creativity and potential the three brothers had that really excited us that evening. For a relatively young restaurant, the cooking here was rather adventurous and ambitious. Creating a tasting menu every day based on the produce you harvested is not for the faint hearted chef and takes locality and seasonality to another level. Coupled with the young vibrant front of house and sommelier, O.MY may possibly be the most exciting up and coming restaurant I have been to this year. It is certainly worth a trip out of Melbourne for a meal. I look forward to witnessing how their cooking will evolve in the forthcoming years.