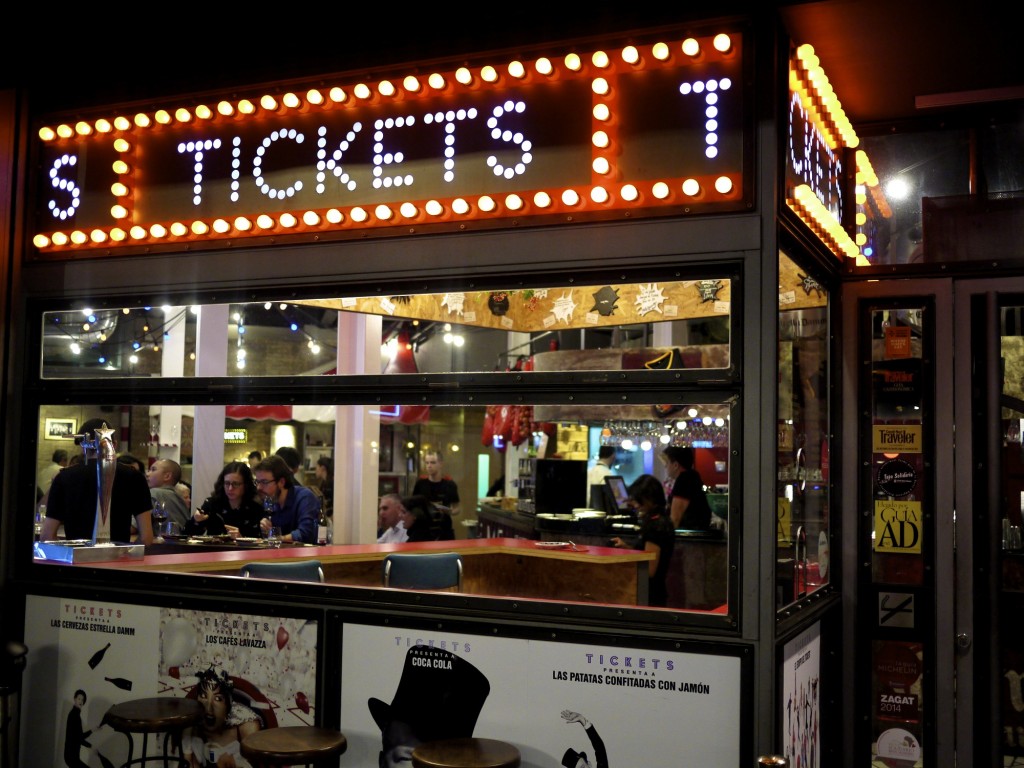 elBulli’s closure in 2011 marked an end of an era. There was a shift in the global culinary direction away from molecular gastronomy and towards foraging – thank you Rene Redzepi. It was therefore reasonable, in my view, to be skeptical about the longevity of the Adrià brothers molecular tapas venture in Barcelona, Tickets. After all, people are fickle. Of course, there were a few thousand people who had missed out year after year on a reservation at elBulli (I was one of the fortunate ones but only just), but surely the hype would have died four years on? Is molecular gastronomy a thing of the past? 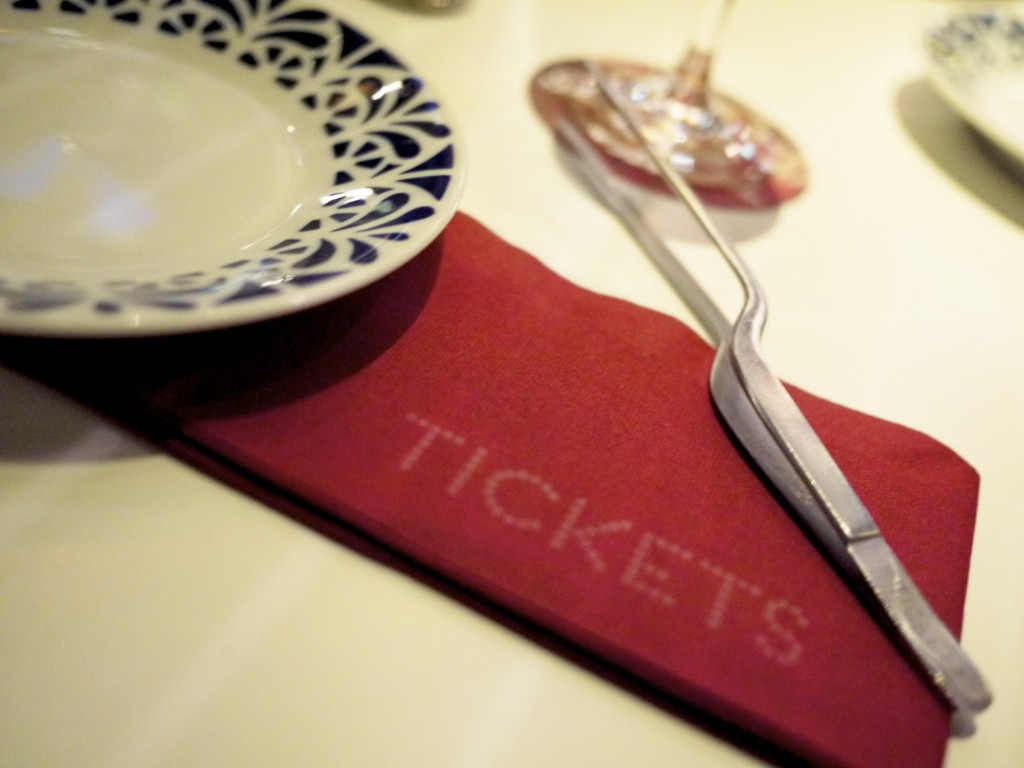 I was initially intending to go to 41 degrees but unfortunately it had closed before I could come back to Europe, but don’t get me wrong, I wasn’t disappointed when I managed to secure a table at Tickets. I had only visited elBulli once (4 years ago, just prior to its closure) so I saw this as my chance to try some of the other elBulli classics that had evaded me over the years of unsuccessful reservation attempts; Tickets, I understood, also had some of the classic elBulli dishes so my chances were good.

So, after flying 32 hours from Australia, I was finally here outside waiting eagerly to reignite that magical meal from four years ago. This time however, there was one difference… I was with my 11 month old daughter… 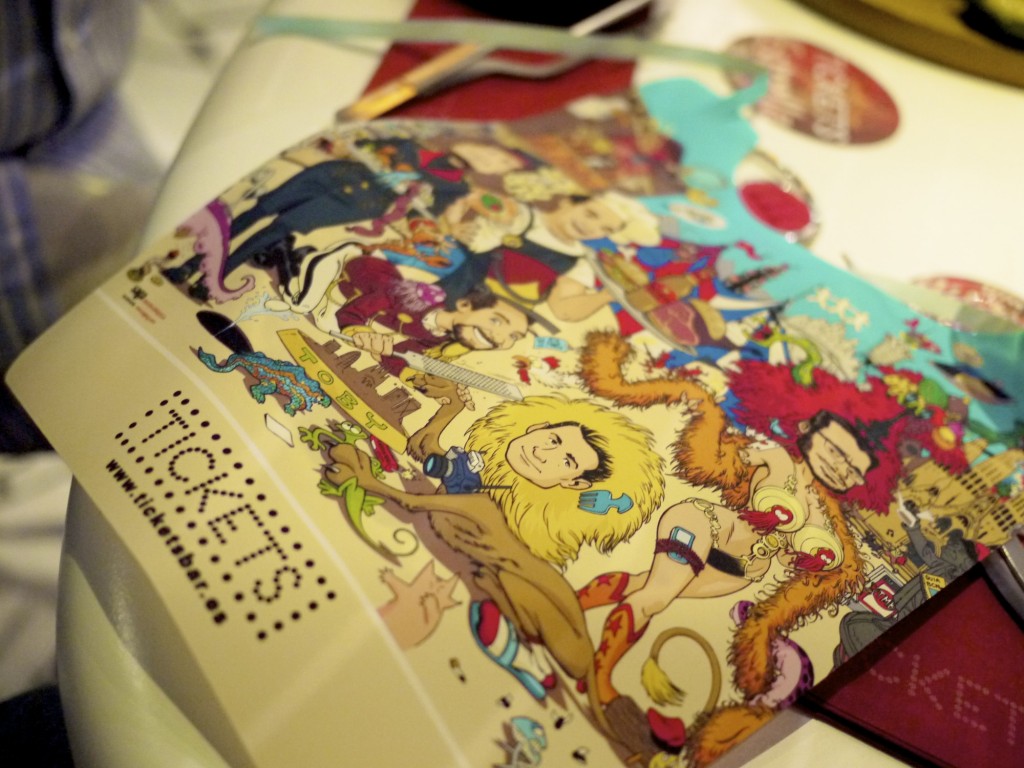 I was surprised (but also relieved) to find that a child seat was an option when making a reservation. Of course it was music to my ears, and if anything it highlighted the cultural difference between Australia and Europe when it came to dining out (cough, cough, Vue de Monde). My daughter was even given a very colourful bib for her meal. I was initially worried about inconveniencing other diners if she cried but the festive atmosphere in the restaurant muffled any noise. Much to our relief, this was not one of those quiet Michelin starred establishments. 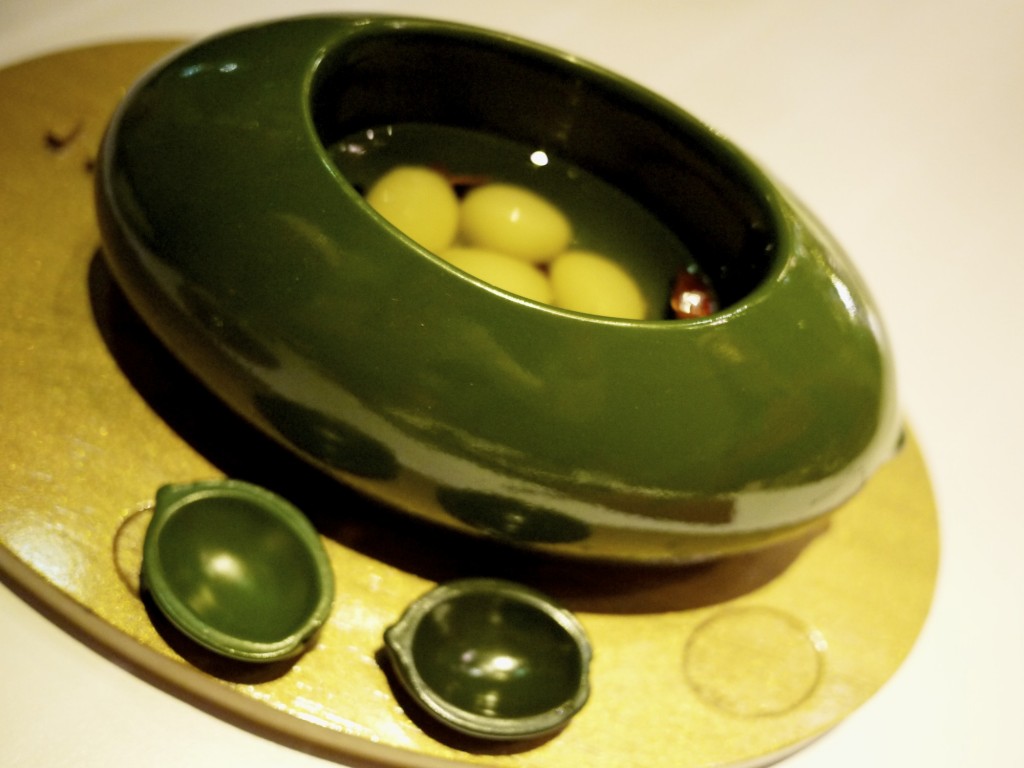 1st Course – Tickets’ Olive-S: I wasn’t surprised to find the reverse spherified olive at Tickets given Ferran Adria was the pioneer who invented the technique. 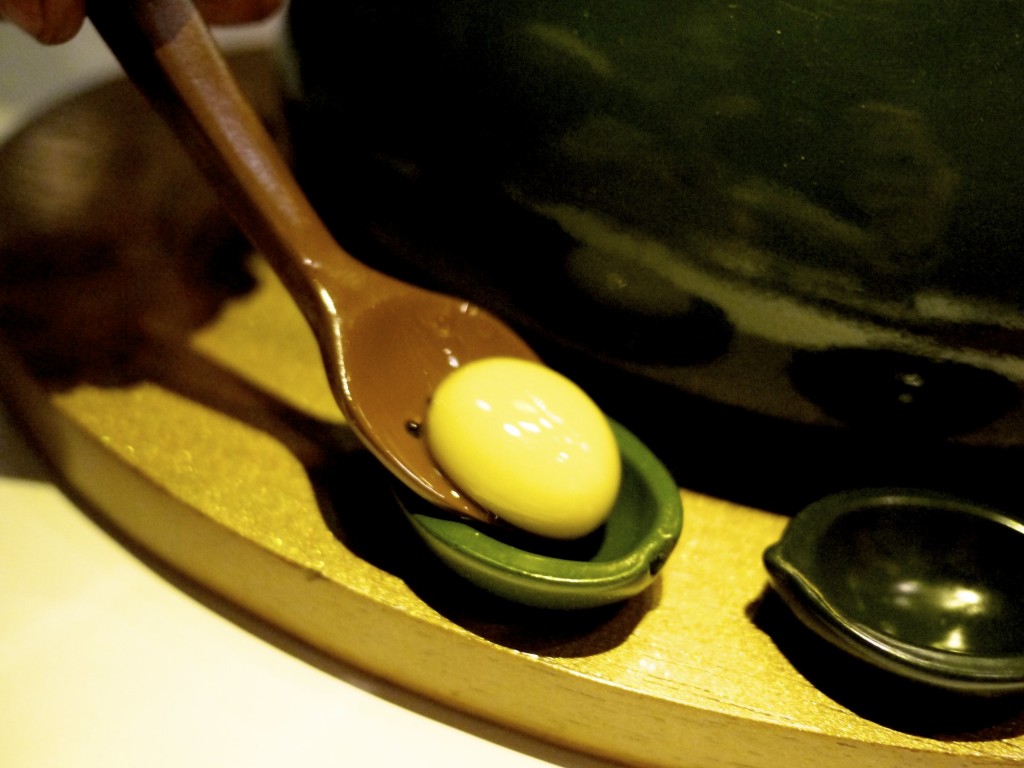 They were very delicate spheres that had to be scooped delicately to avoid breaking the membrane. The flavour was… well… not too dissimilar to that of a high quality virgin olive oil. Left to our own device to serve them, it was inevitable that there were a few casualties. However, the ones successfully devoured were delicious and fun when they popped in your mouth. 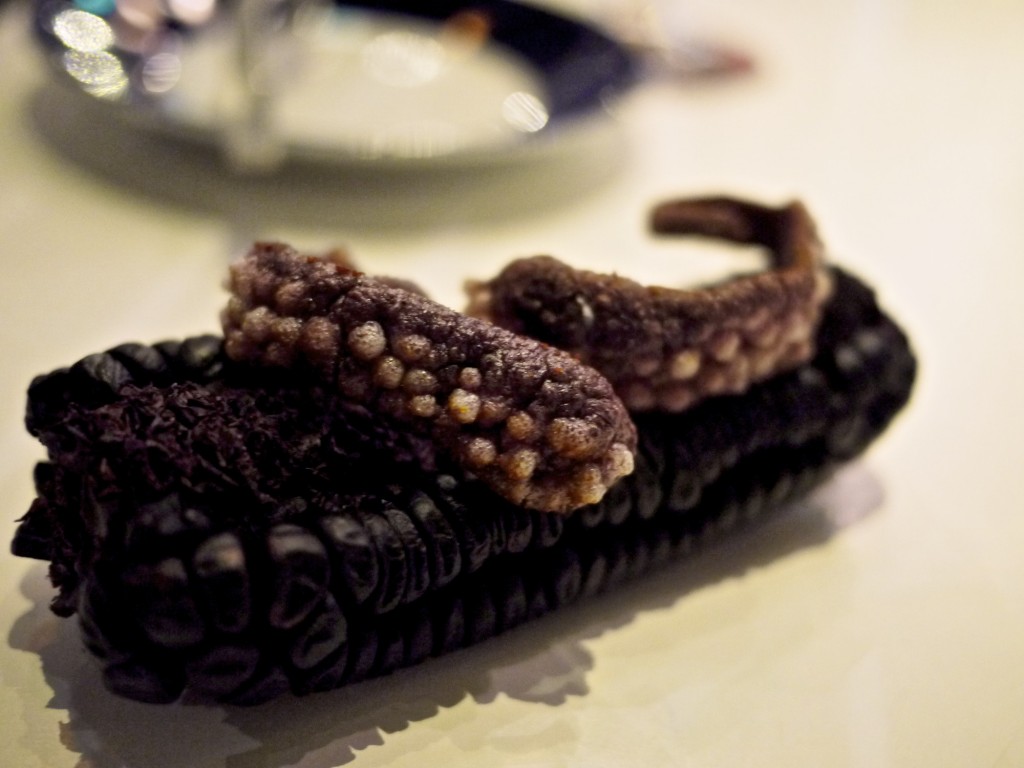 2nd Course – Spicy corn tentacles: Crunchy corn crackers with a mild level of heat from spices. Airy and crispy. I could easily have had a bag of these with a cold glass of beer. 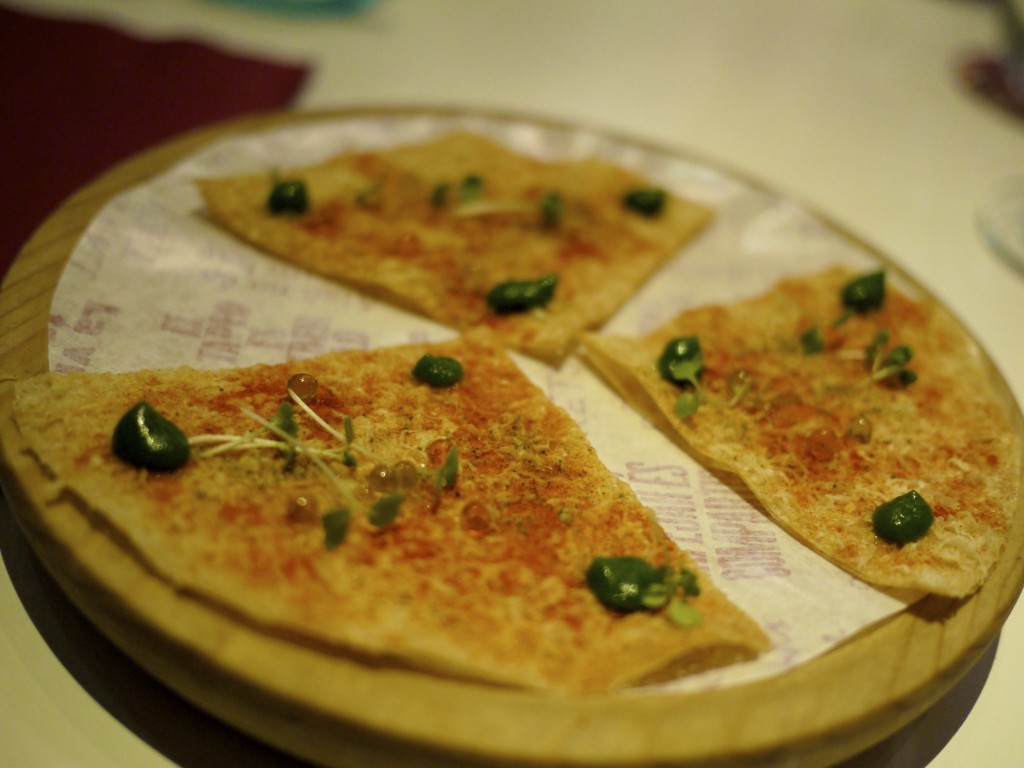 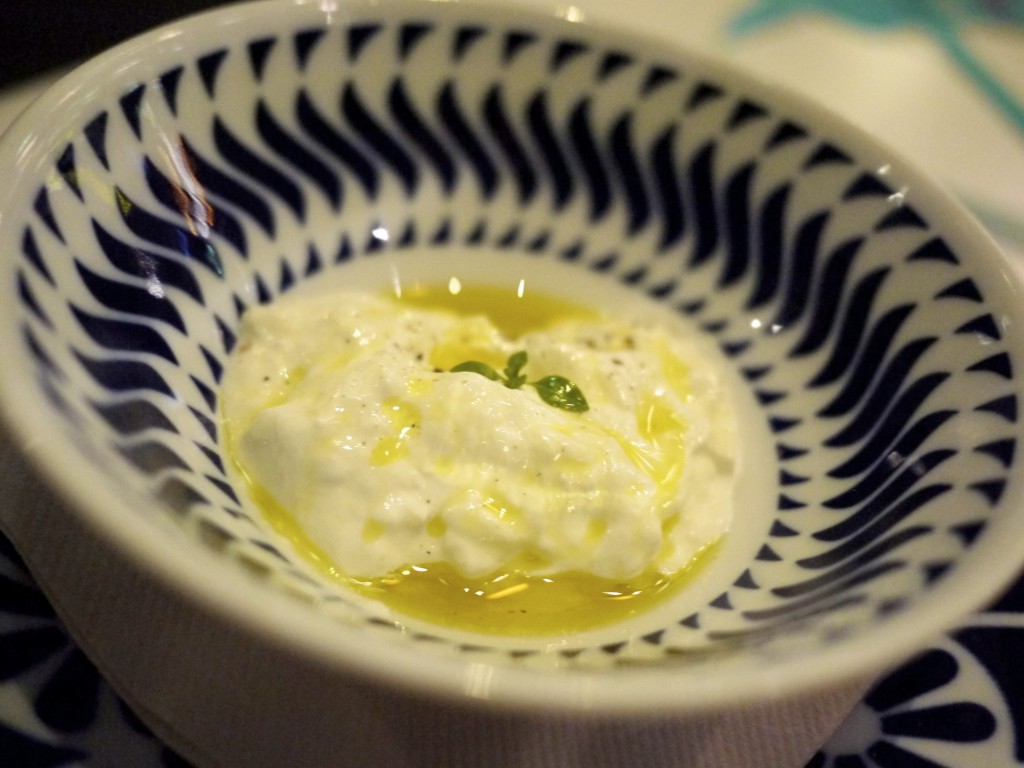 … Bufala Straciatella to dip into. The pizza base was wafer thin and crispy, topped with a dust of dehydrated tomatoes, microbasil and spherified basil oil. The creamy bufala was a much needed component that was cleverly added last minute to avoid the pizza base losing its crunchiness. Delicious. 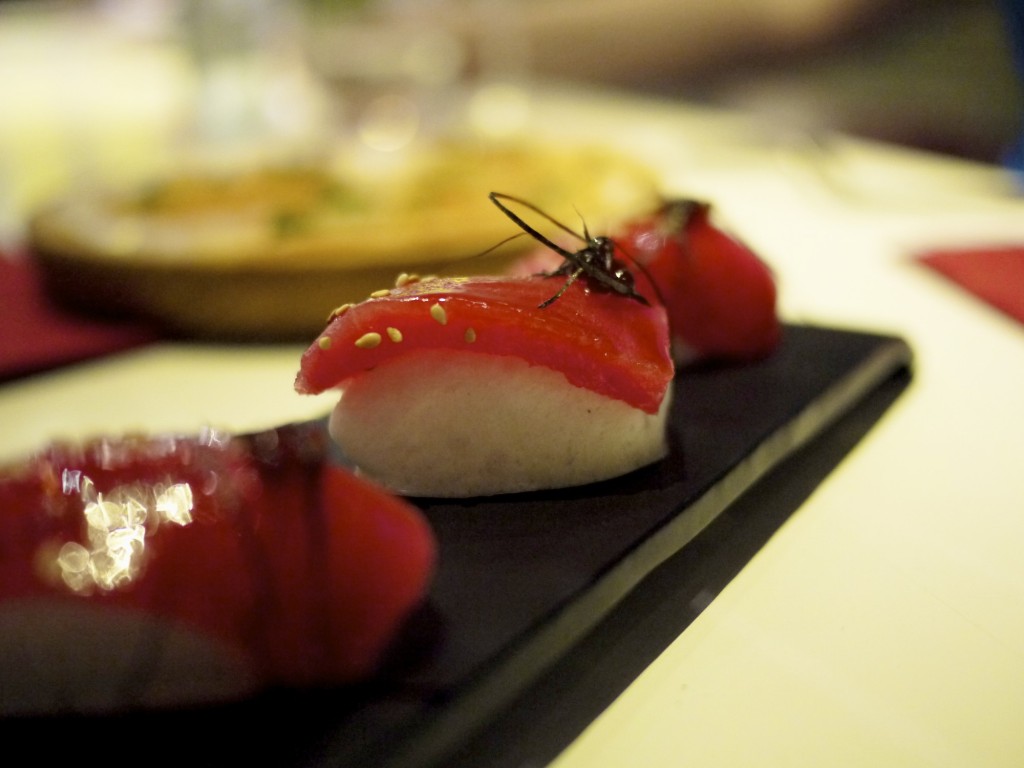 4th Course – Nigiri of Tuna: A slice of the akami (red lean meat) of the tuna served on a puffed up lemon meringue made to look like a ball of rice. The combination surprisingly worked well with the lemon meringue providing a sharp contrast to the cold slice of tuna. Certainly not a traditional “sushi” course but enjoyable nonetheless and a bit of fun. 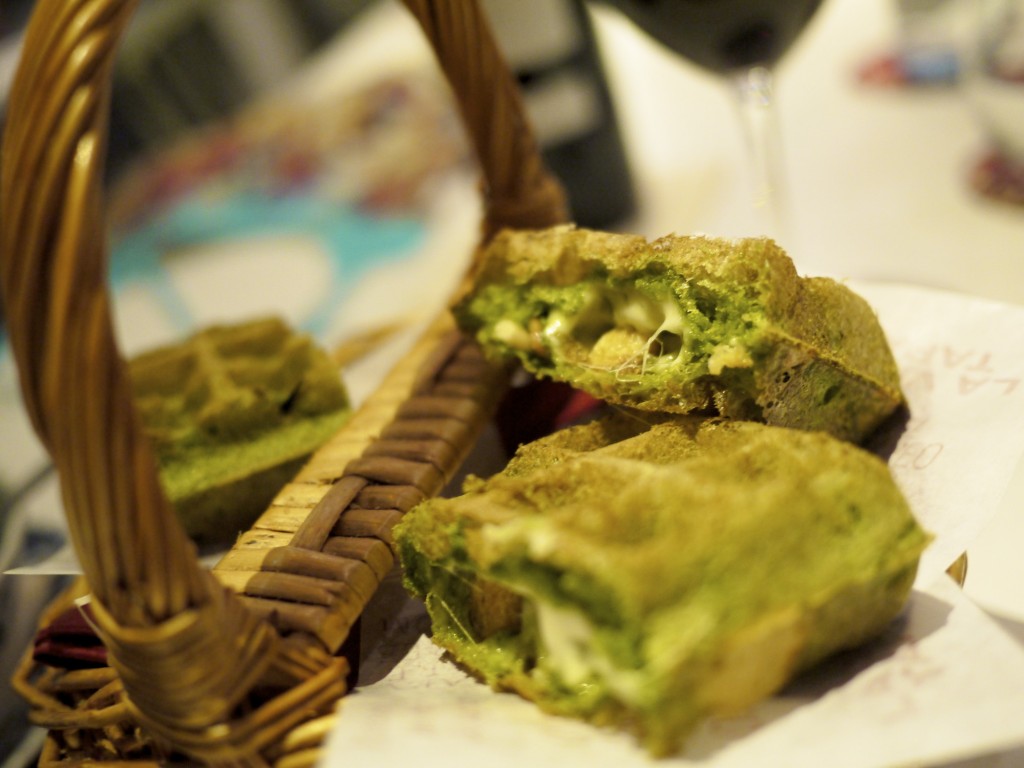 5th Course – Basil Air Waffle: Light and fluffy waffle with melted cheese inside. The basil worked very well with the cheese, not too strong but clearly present. 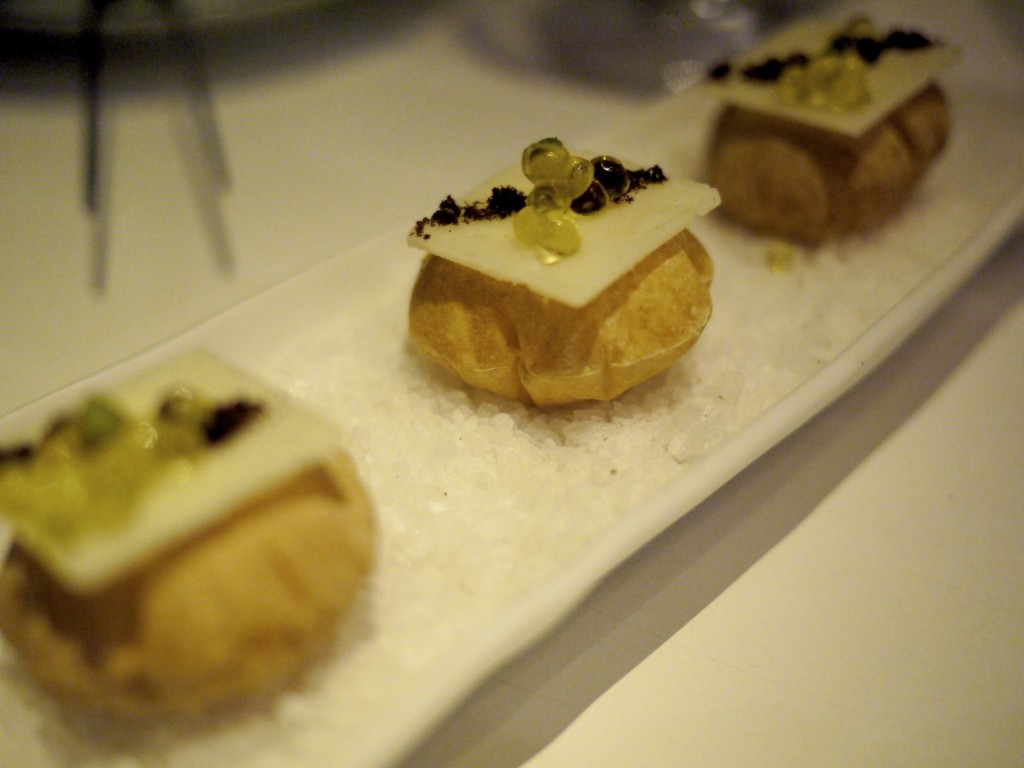 6th Course – Mini Airbag with Manchego cheese foam: It was an incredibly delicate dish that packed a bag of flavours. The mini airbag was exceptionally thin and the manchego foam had an intense flavour of matured cheese. The dehydrated line of iberian ham and hazlnut oil added some extra dimensions in flavours. 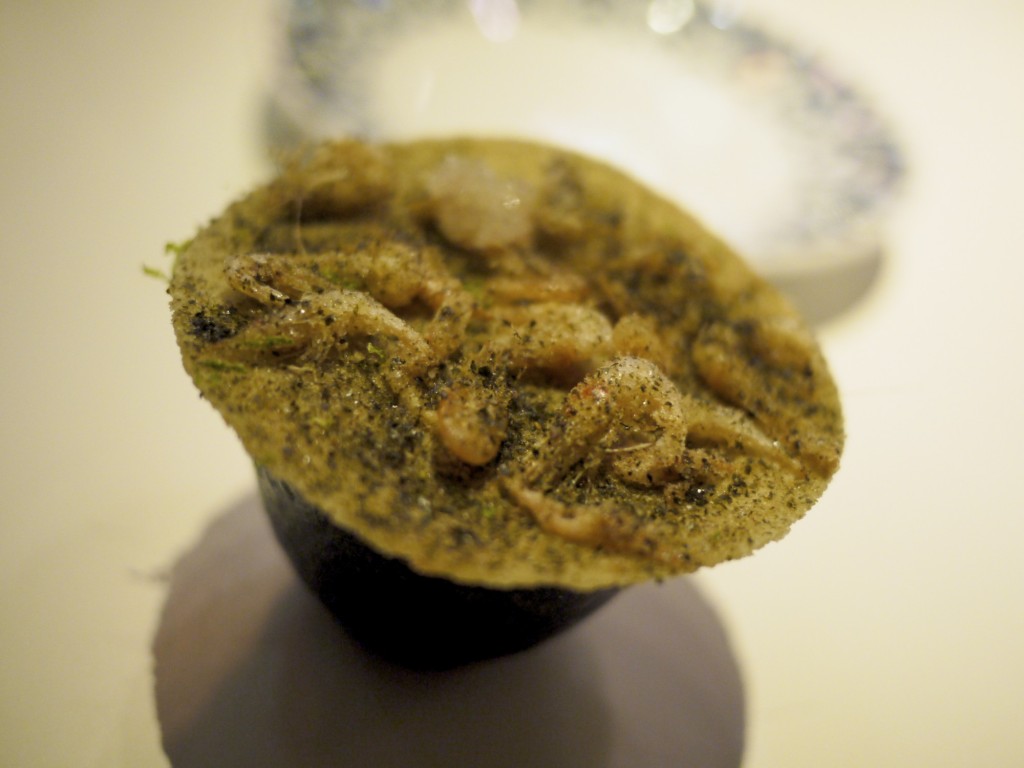 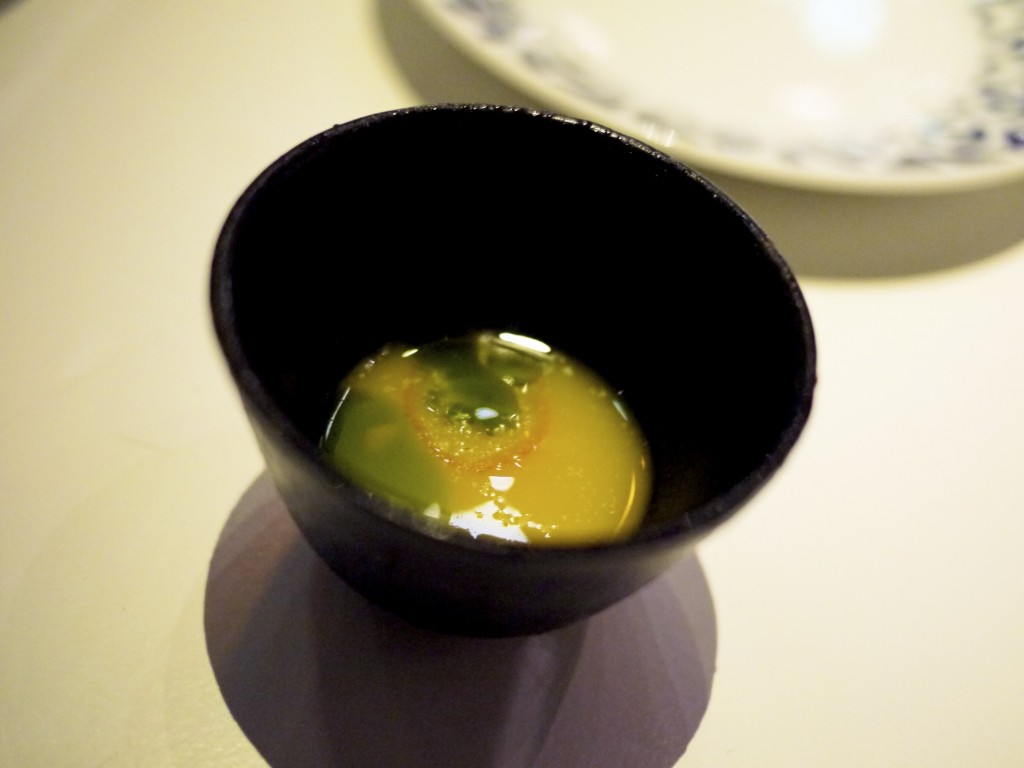 … a citrus sauce typically used for ceviche. It wasn’t a particularly memorable course and I found the citrus sauce slightly too sharp. 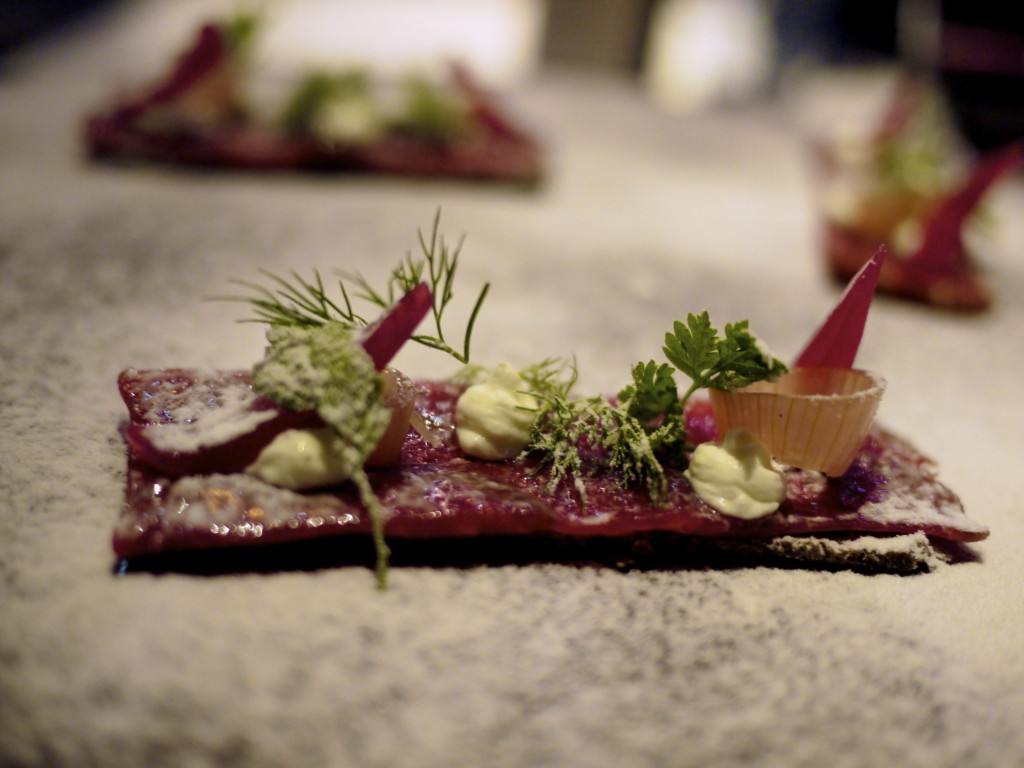 9th Course – Nordic Landscape with smoked cheese: A bed of crispy rye bread with a layer of veal tartare, lingonberry, slice of shallots, soft smoked cheese and some carefully scattered typical Nordic greens. It was finally dusted with a powdered vinegar ‘snow’ to cut through the rich meat. Perhaps a pointed reference to the foraging trends…? 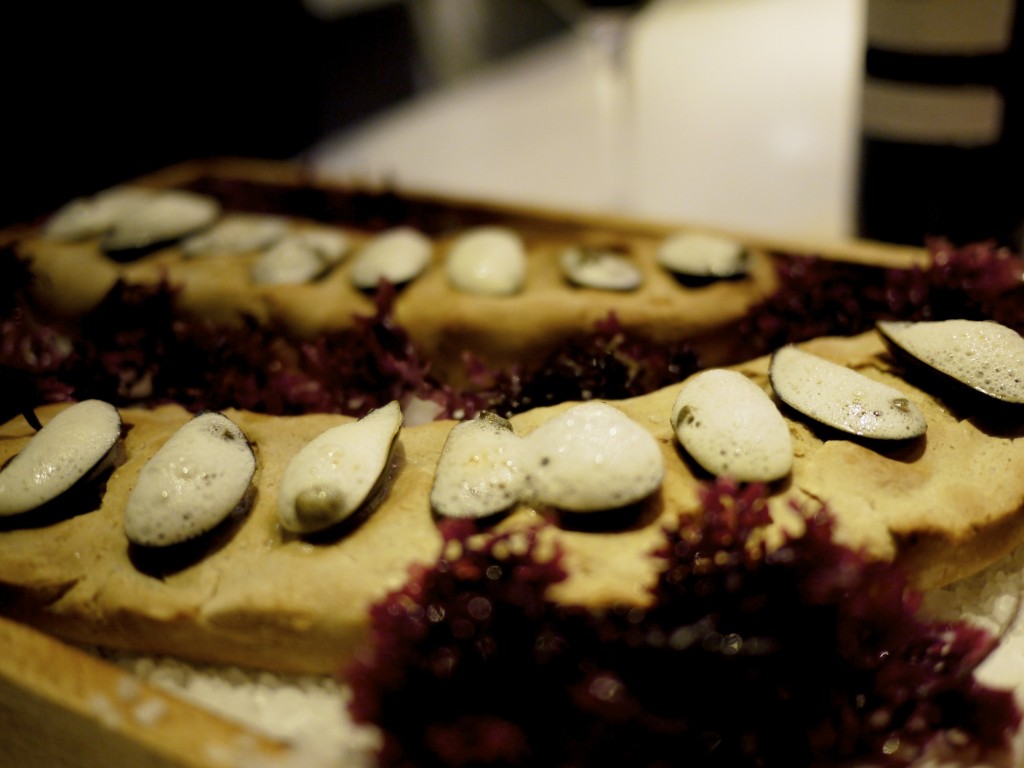 10th Course – Mini mussels with beurre blanc air: A generous portion of tiny mussels dressed with a thick and creamy beurre blanc foam with a hint of yuzu. They were delicious, impressive considering I prefer my mussels to have as little intervention as possible. We could have eaten many more. 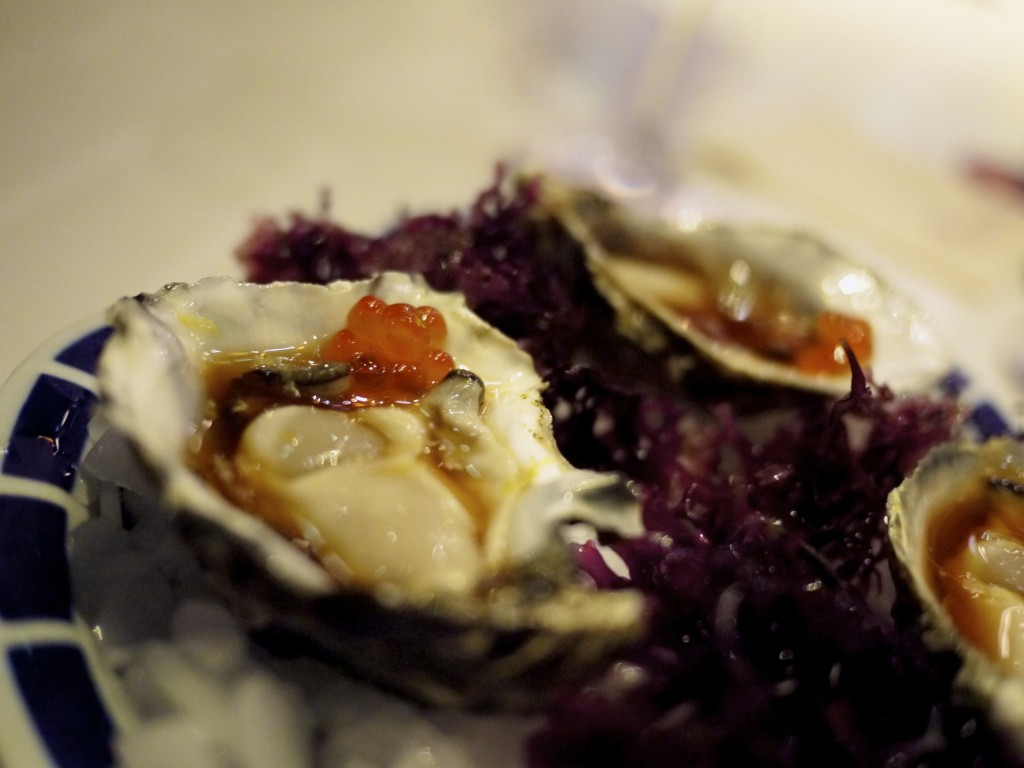 11th Course – Trip to Tokyo, oyster with ponzu sauce: Top quality Gillardeau oyster with a splash of ponzu and dashi sauce and salmon roe. Whilst I normally prefer my oysters naturally served, this was not a bad dish. The balance of the ponzu sauce and the natural saltiness of the oyster and salmon roes was spot on. I could see why the waiter recommended this oyster amongst the many other choices we had. 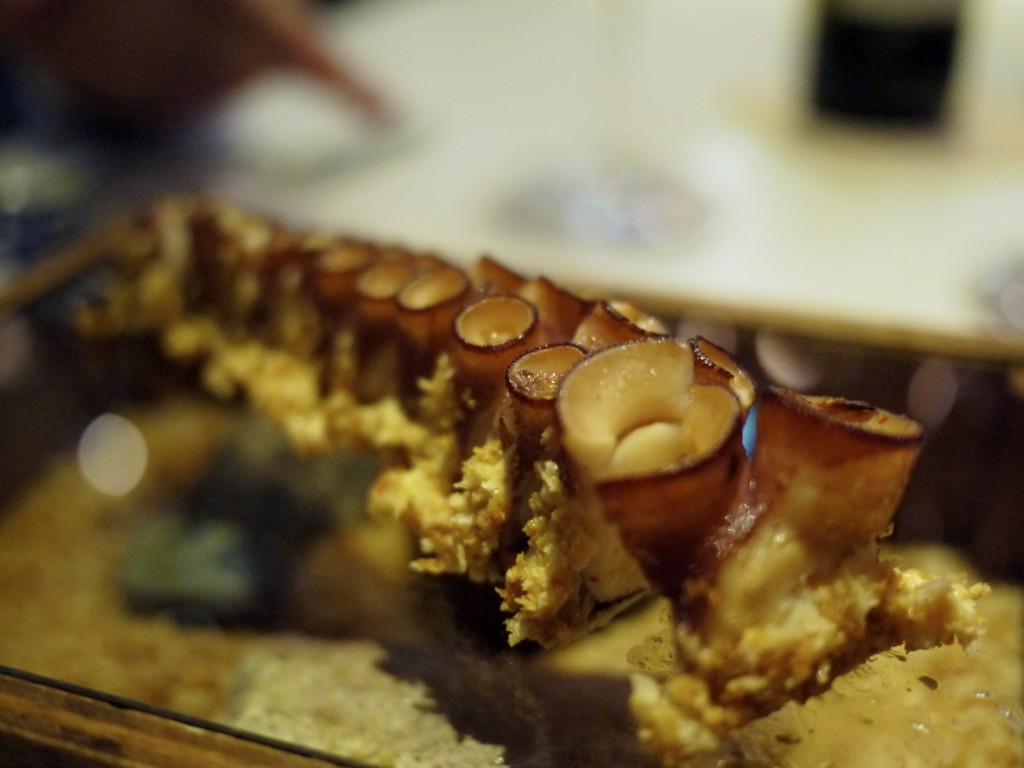 12th Course – Crunchy Octopus with pickled Piparra: La piece de la resistance and by far the best dish that evening. The octopus grilled octopus was served on a bed of slightly hot kimchi butter and some crispy panko bread crumbs that worked ever so well for textural contrast. This was a very rich dish and the portion was just right for three adults. It went ever so well with the occasional bite of… 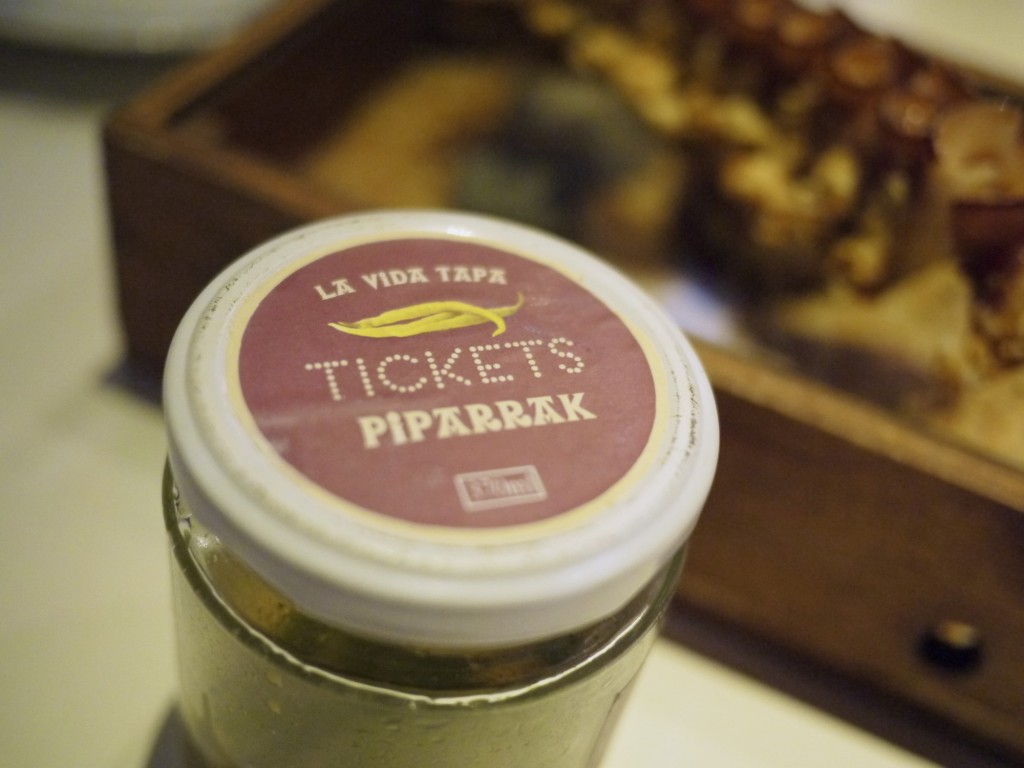 … traditional Basque long half pickled green chili’s called Piparra. Any Basque Pintxo aficionado will know how addictive these chili’s can be. The vinegar cut through the rich octopus beautifully to occasionally clean the palate. 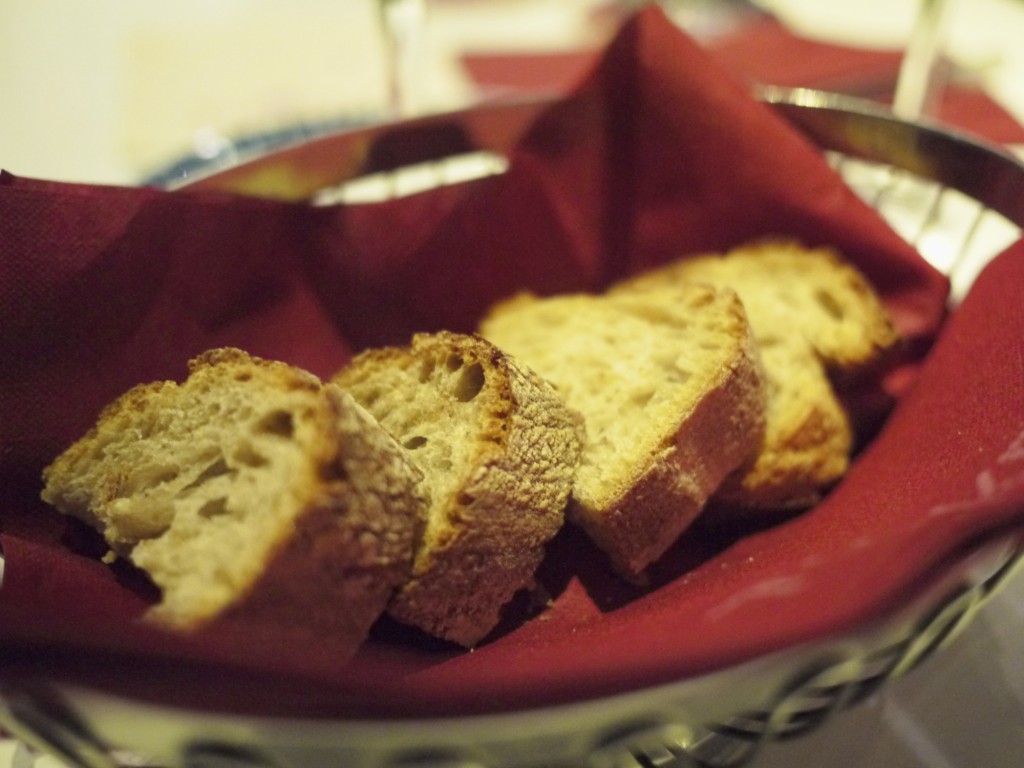 Some bread to go with the next course of… 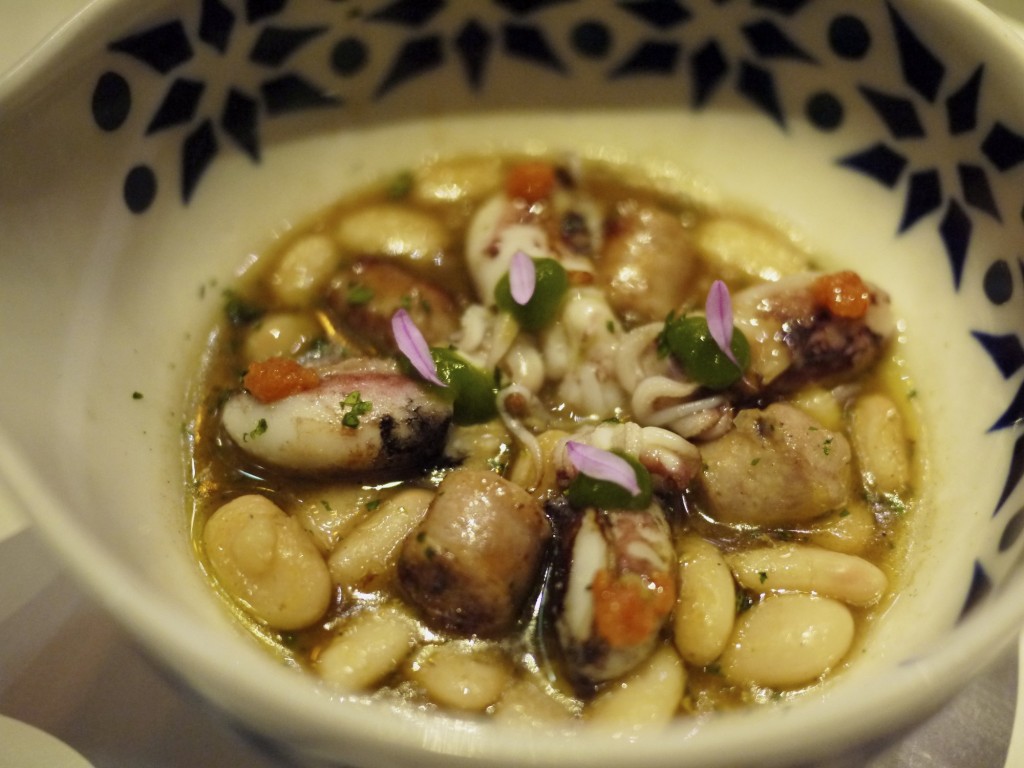 13th Course – Surf and Turf with baby squids and Iberian sausages: A typical Catalan dish which requires one to know the region to truly appreciate it. I loved the fact that this humble dish had a place on Adria’s menu. Each of the elements were cooked well from the baby squid and white butifarra sausages to the beans. It was, however, an odd dish to have in a molecular cuisine restaurant and felt slightly visually ‘ordinary’. 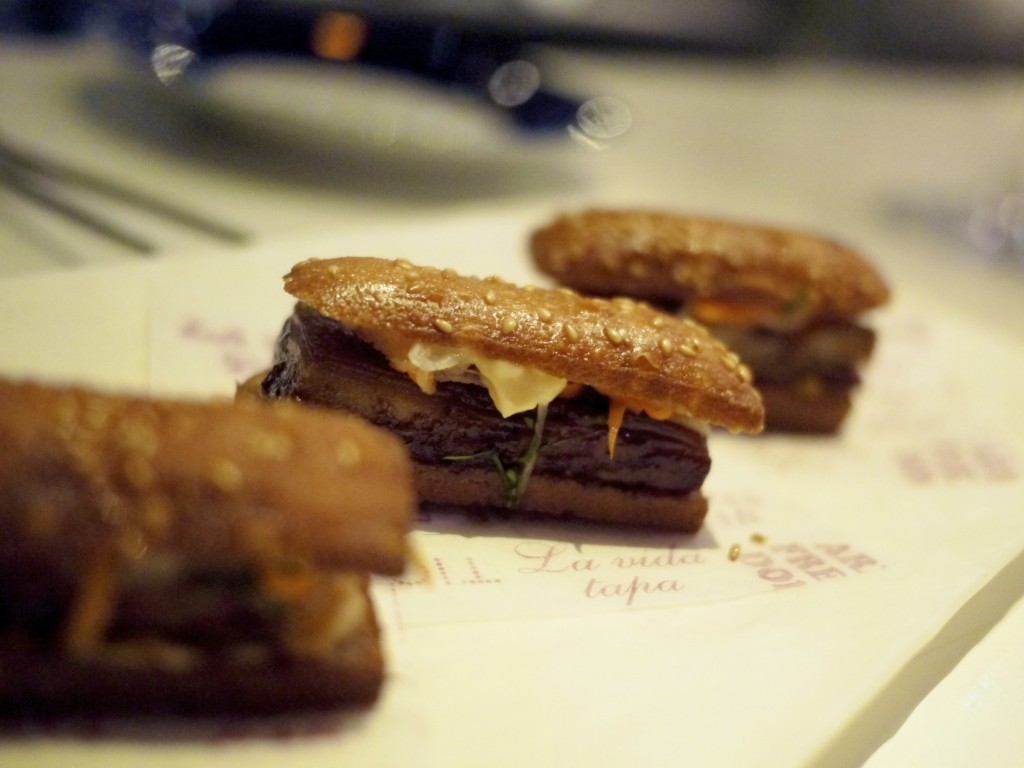 14th Course – Mini ciabatta with crunchy suckling pig: We felt we could order a few extra dishes so proceeded with some additional recommendations. The suckling pig sandwich was fatty, spicy and quite filling. Though the ciabatta was a bit thick it didn’t detract the flavour of the pig. 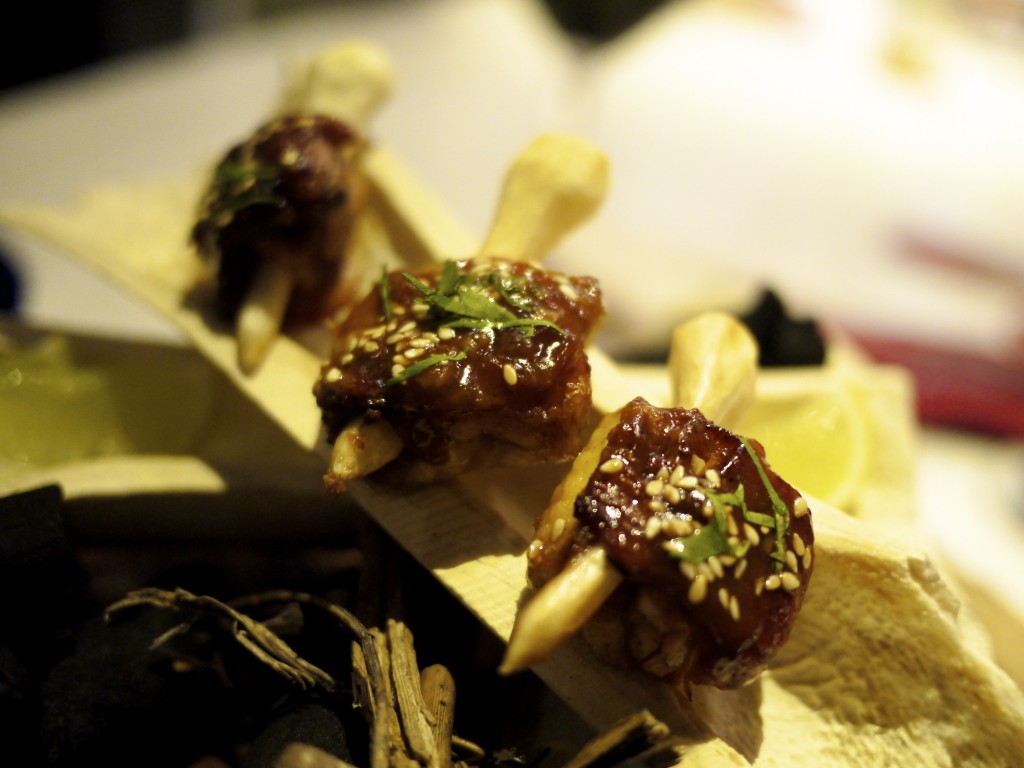 15th Course – Cannibal chicken with Chinese barbecue: Chicken thighs were served with a ‘bone’ made from yuca (cassava) chips over smoking coals. The Chinese barbeque sauce was nothing out of the ordinary but the chicken was tender and juicy. 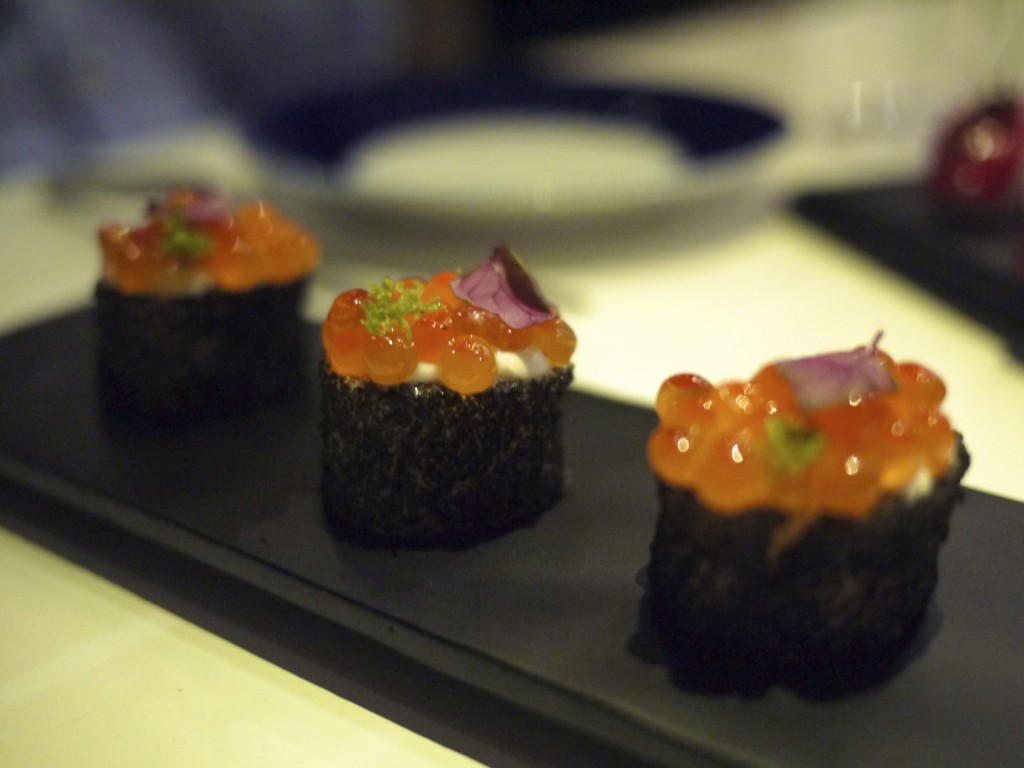 16th Course – Gunkan with trout roe: The dashi foam formed the base of the ‘rice’ element, dressed with some trout roes and shiso leaves. I didn’t enjoy the texture as it felt quite mushy and the nori was rather soggy. The flavour was however quite enjoyable, especially as each roe burst with its sticky juicy content. 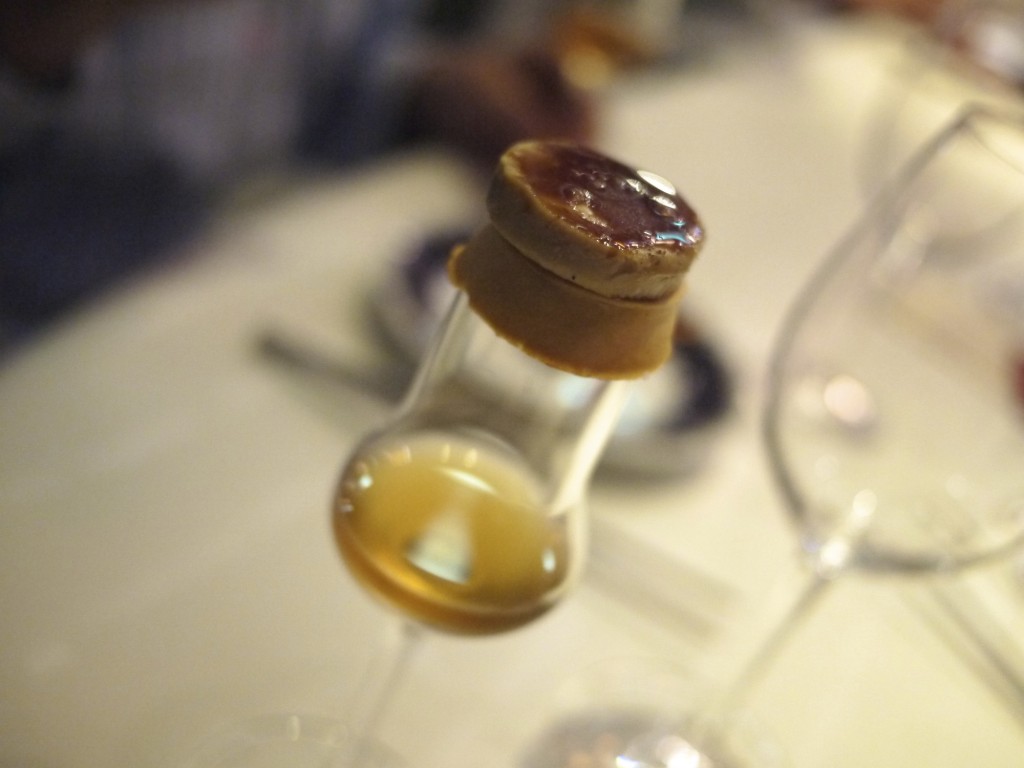 17th Course: Foie gras tapa with its “palo cortado”: A rich disc of foie gras resting on top of a glass of semi-dry sherry. Loved the combination and a perfect transition into dessert. 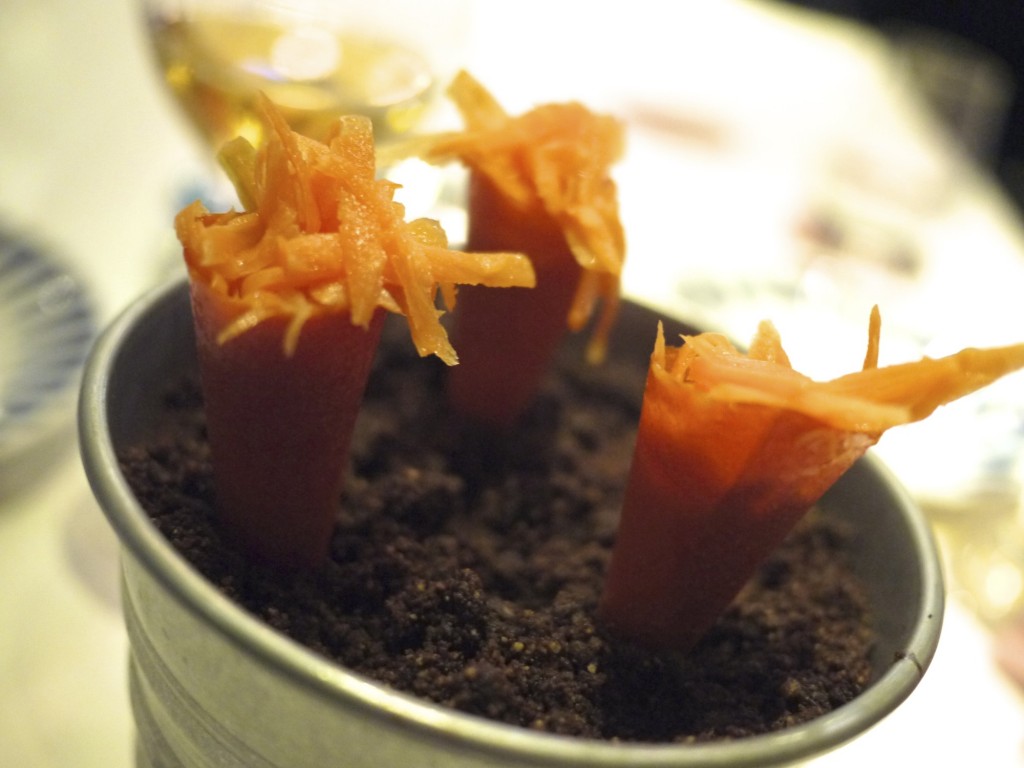 18th Course – Carrot cone, cardamom yoghurt, sugared sesame, and mango and carrot ice cream: A pre-dessert of all things orange. Refreshing and a great palate cleanser. I couldn’t decide whether I liked the texture of the raw carrot shavings but I thought the dish was overall well executed and different. 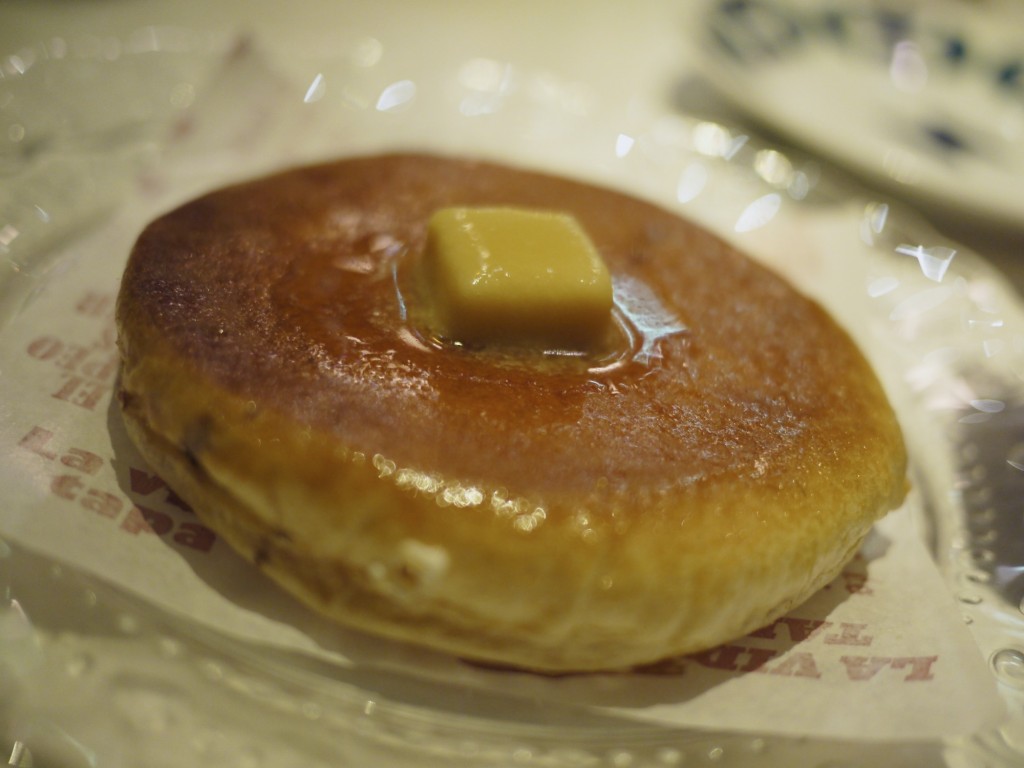 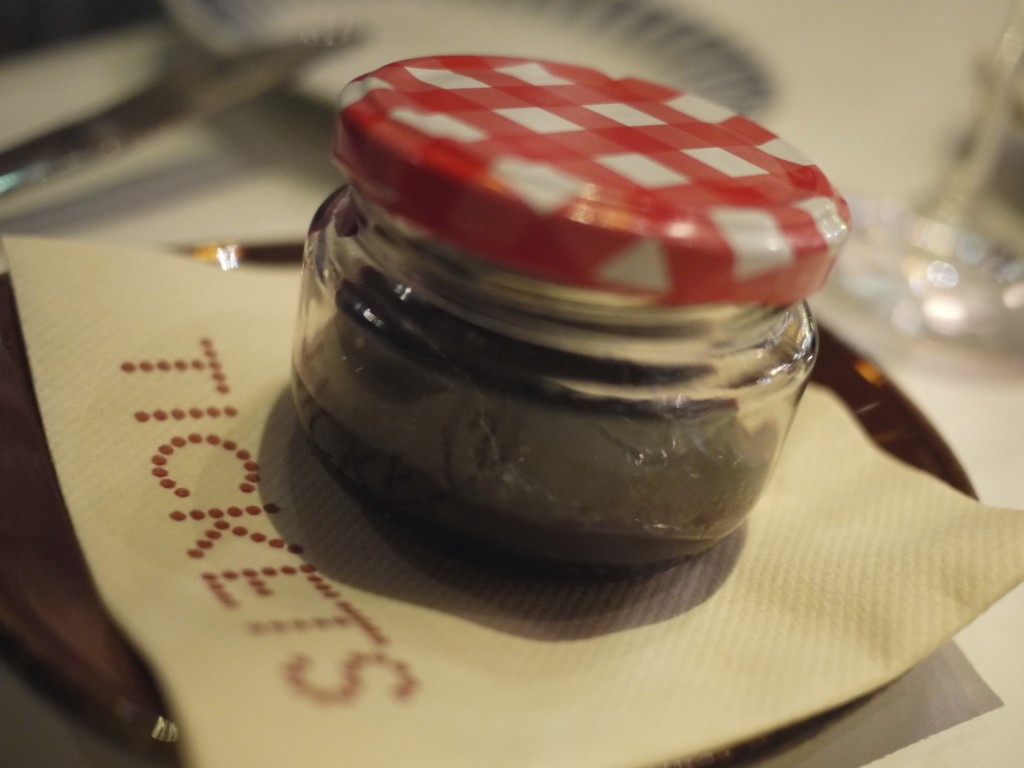 … a jar of blackcurrant preserves. We were then instructed to smear the preserve over the pancake 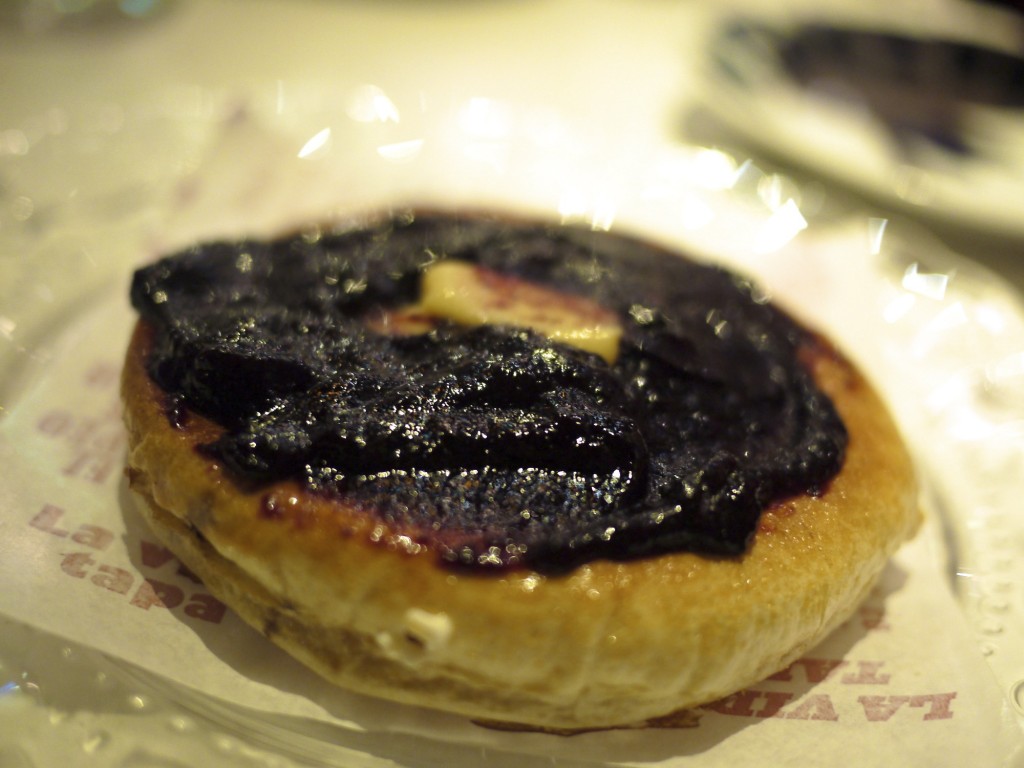 I wasn’t quite sold on this dish and felt it missed the mark. Sure, it was a deceivingly light dish but the flavour became one-dimensional after a couple of bites. I’m not a big fan of preserves generally and this sadly was not an exception. 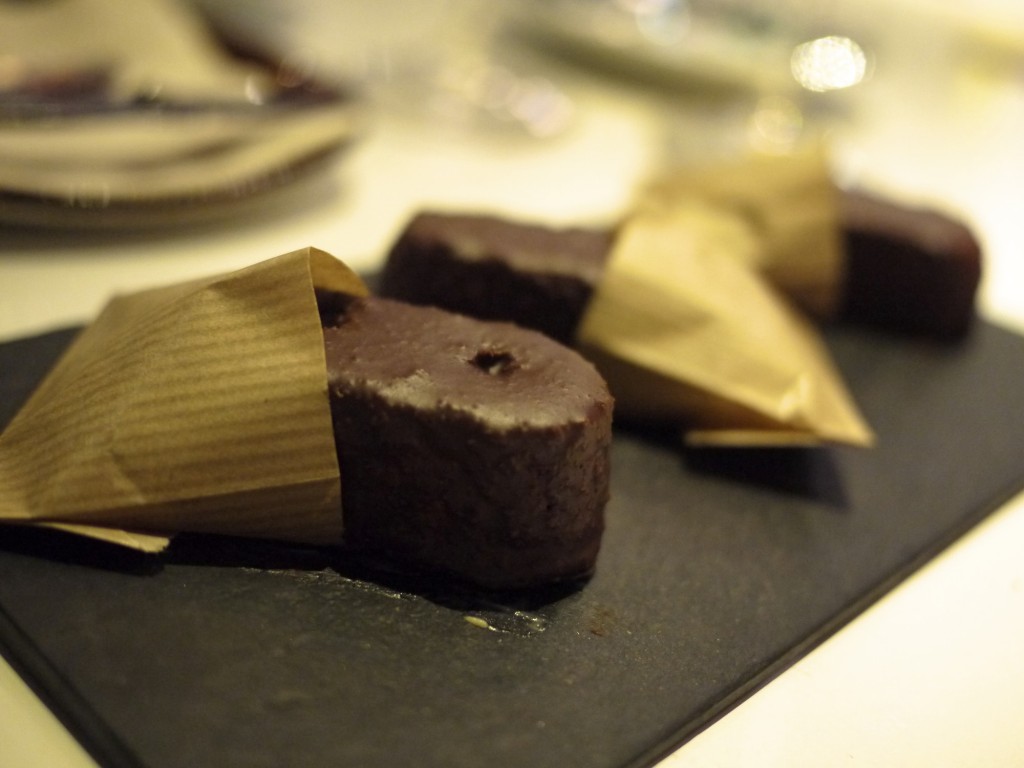 Course 20 – Chocolate eclaire with hazelnut and royaltine: The hazelnut cream core and the crunchy chocolate royaltine were enjoyable, making this one classy ice cream sandwich. Overall however the dessert courses felt weak and lackluster in performance compared to the savory courses. Had it not been for my 11 month old daughter waking up and showing her discontent that she was not in her bed, I would perhaps have ordered a couple more dessert dishes but alas I had pushed the friendship far enough and it was time to get the bill. 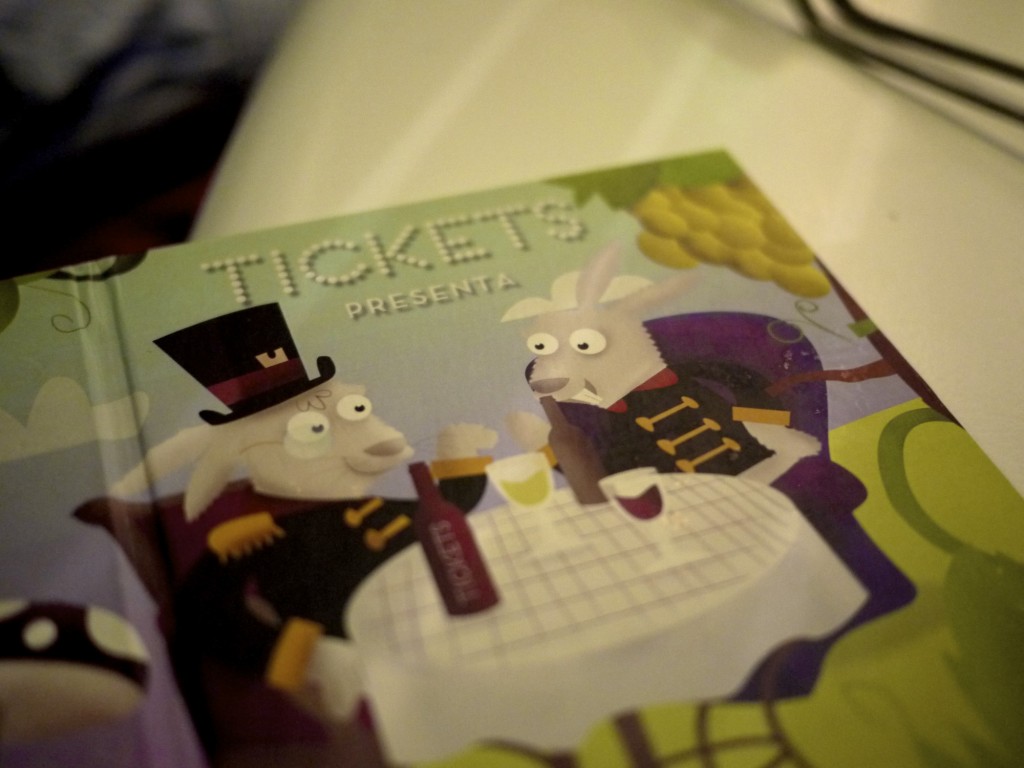 Tickets was a whole lot of fun and the chaotic atmosphere surprisingly played to our advantage with a little person in tow. Jokes aside, the food here was well thought out, perfectly executed but never too serious and almost always delicious. It was the type of place you’d want to randomly rock up to with a few friends after work or bring your family after a day out. This also highlighted my main criticism of Tickets, it wasn’t the type of place I wanted to book three months in advance, exhaustively fighting other people for a reservation. There is no sense of occasion that comes with the venue or the experience other than the connection to elBulli. Perhaps the latter explains why it remains one of the most difficult places to get a table in Barcelona four years on. Don’t get me wrong though. If you are in Barcelona you must give this place a try at least once.