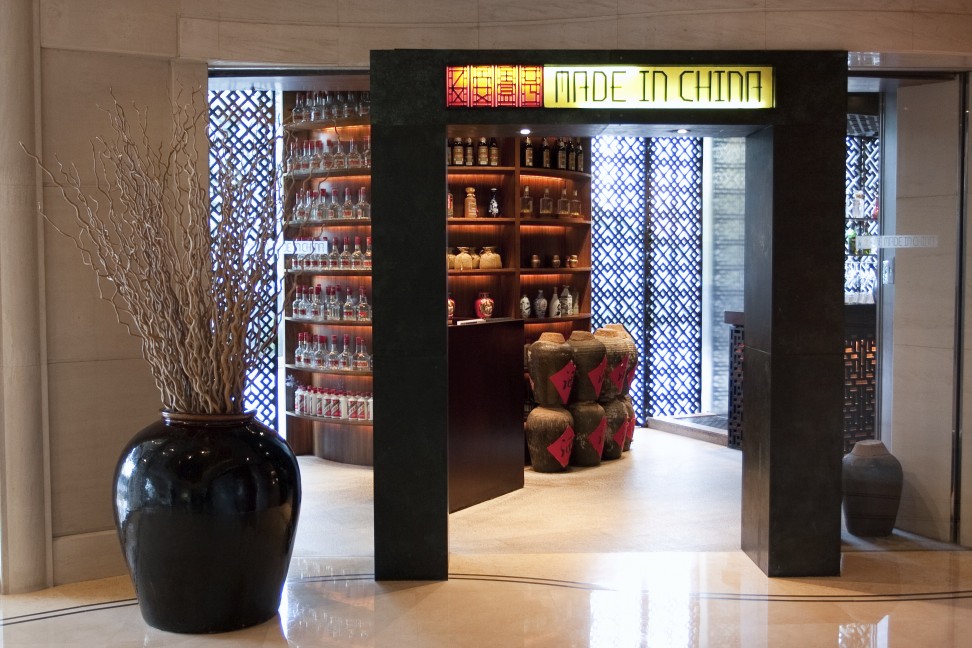 What does one do when in Beijing? Eat Peking Duck of course, and that’s exactly the first thing I did with Fine Dining Explorer when we arrived…. and repeatedly…. during our short stay. But there was a reason for our quest. We were not looking for just any Peking Duck. We were looking for the best, and it came to us as a surprise that finding a good Peking Duck in Beijing was a far more difficult feat than we initially imagined. But the search was finally over when we arrived at Made in China, located in the premise of the Grand Hyatt, Beijing. If there was anything I took away from my two week gourmet blitz trip across China, it was that majority of the fine dining establishments in China were located in the five star hotels. A rather odd concept! 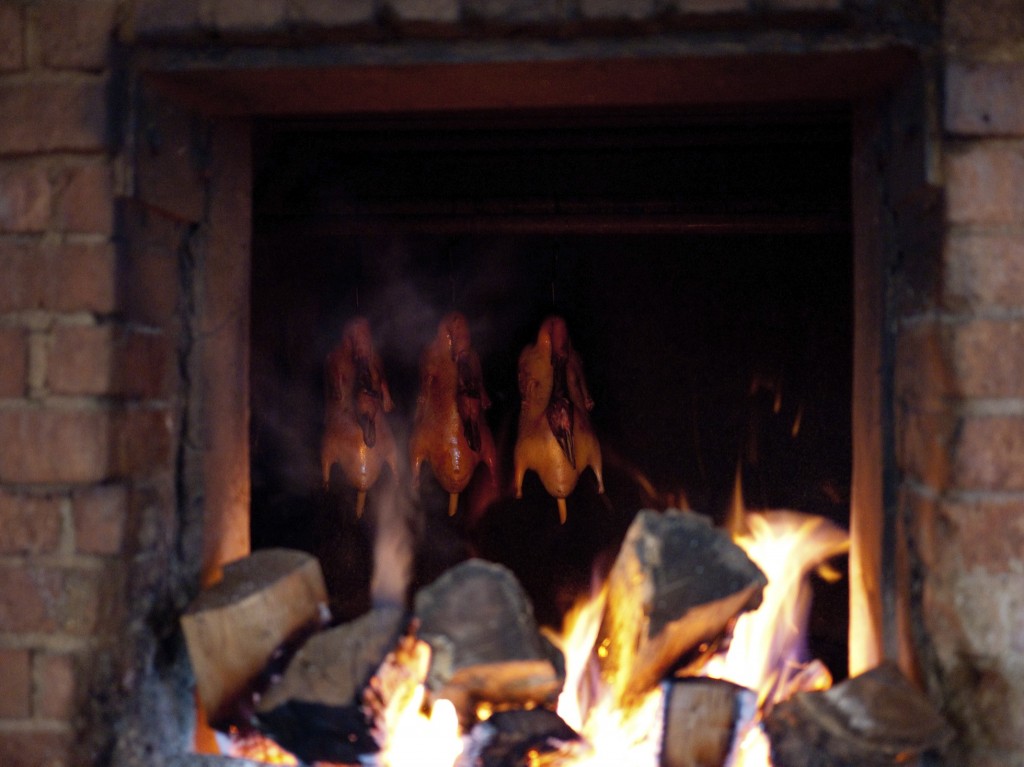 As it turned out, given the lengthy preparation required for each duck, the restaurant had a limited number of 70 ducks on offer every day so reservation for a duck was paramount when securing a table. Lucky for me that Fine Dining Explorer organised everything up front so we had nothing to worry about. I flared my nose in olfactory anticipation as we walked past the ducks that were being given the final touches of an hours cooking in the wood oven. The manager told us that they had been inflated and the hung overnight in the fridge to separate the skin from the meat. 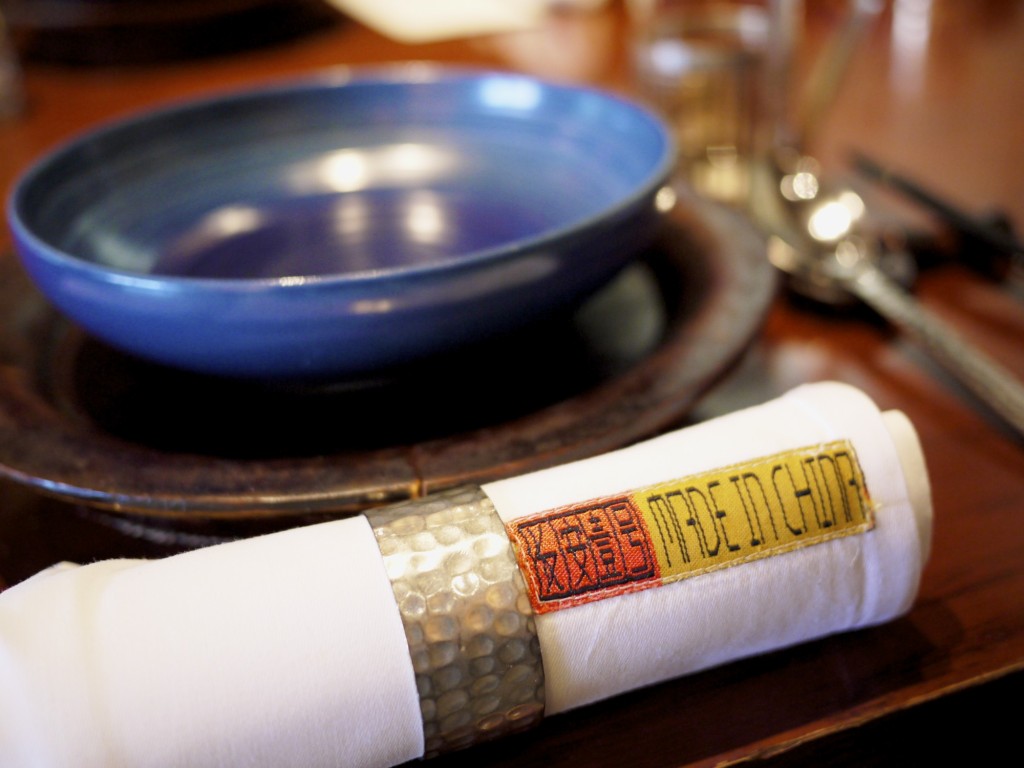 Given we were four very hungry people, it made sense to also order some additional dishes on the side. After all, we were having a duck between us as post-meal snacks on the days leading up to this meal… 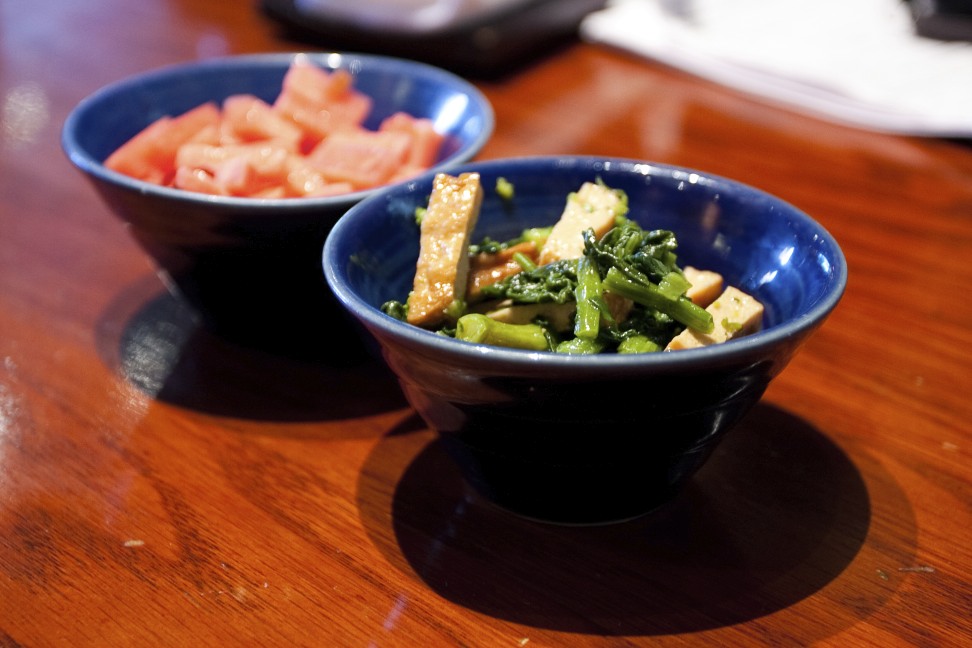 We started off with some pickled radish and dried bean curd as we waited for our dishes to arrive. 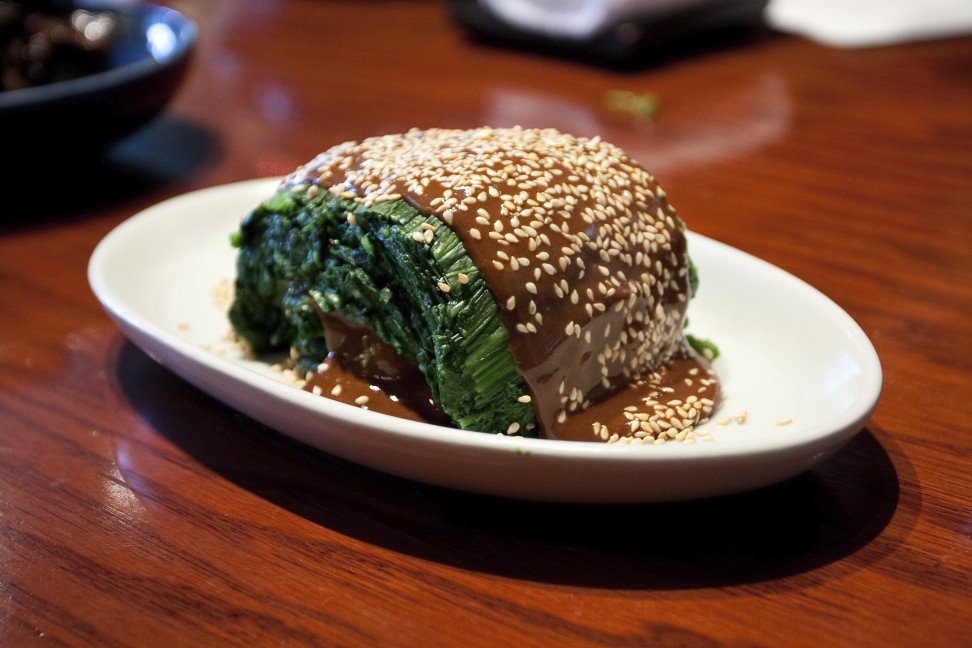 We had an assortment of three entrées starting with the Spinach leaves tossed with sesame sauce and Chinese rice vinegar, which had a lovely nutty flavour and toasty aroma. The flavours for me were more reminiscent of Japanese cuisine. 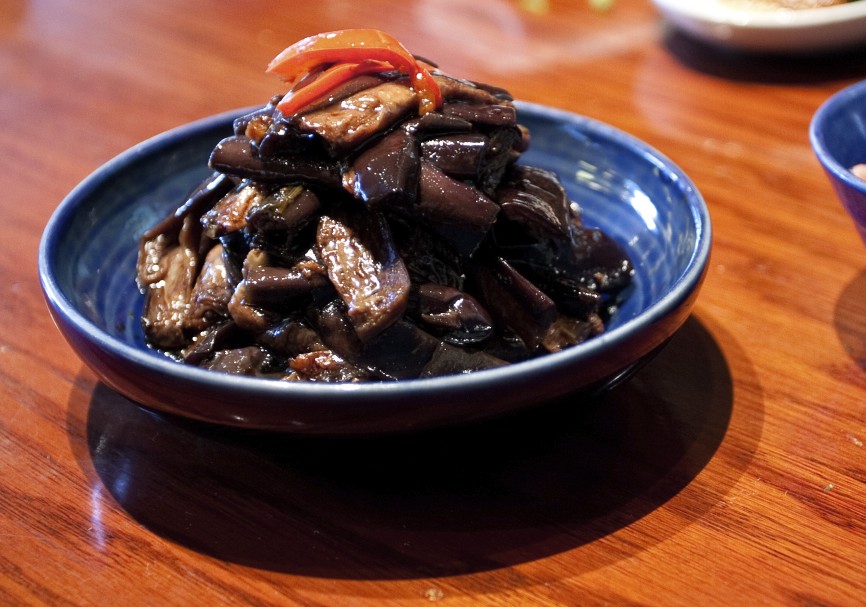 Some Steamed eggplant with Chinese rice vinegar which had a lovely texture and plenty of flavours. I particularly enjoyed the sharpness from the rice vinegar against the earthy mushroom. 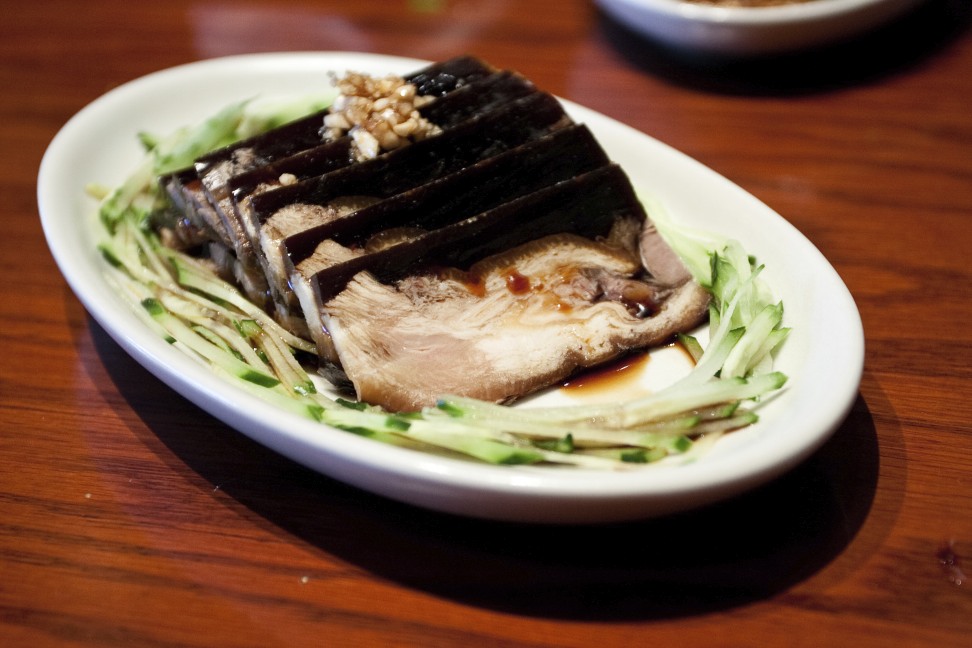 The last of the entrée was a rather disappointing Braised pork knuckle served with pickled cucumber, which had very little flavour and hardly any seasoning. 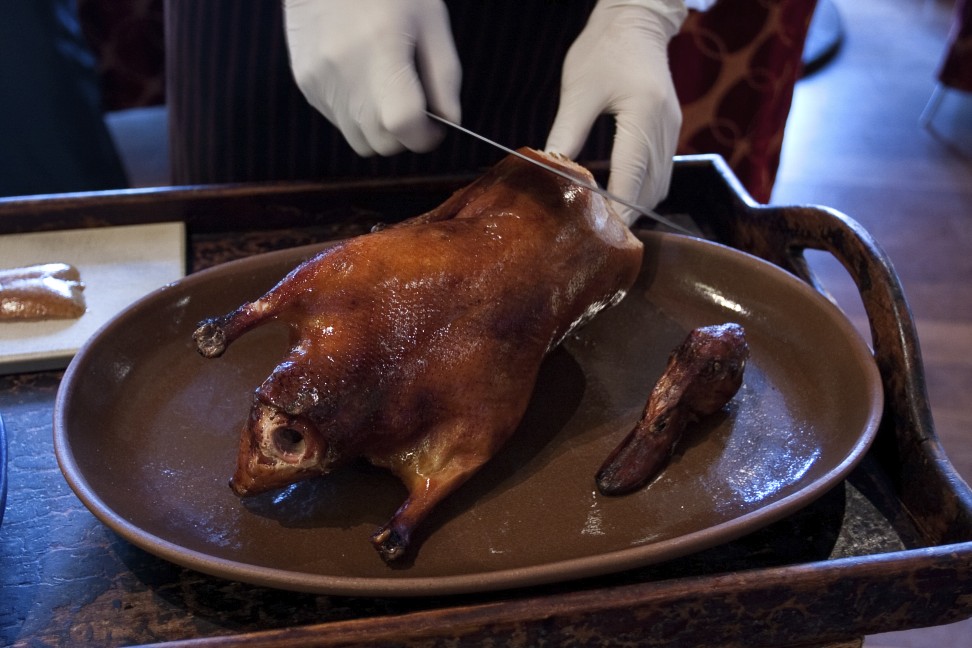 On to our main dish of the evening, the Old fashioned Peking duck from the wood fired oven with classic condiments. We were told that the skin around the wings and neck were the crispiest and most delicate, and therefore prepared first. 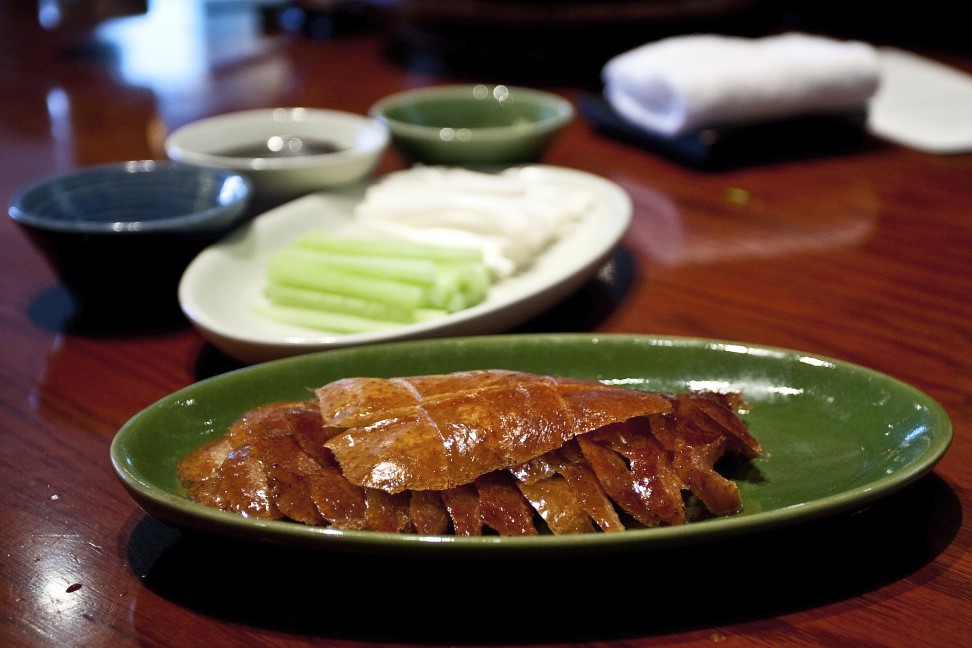 We were advised to have the crispy skin with sugar only. It was remarkably light, flavoursome, and, contrary to expectation, not too oily. 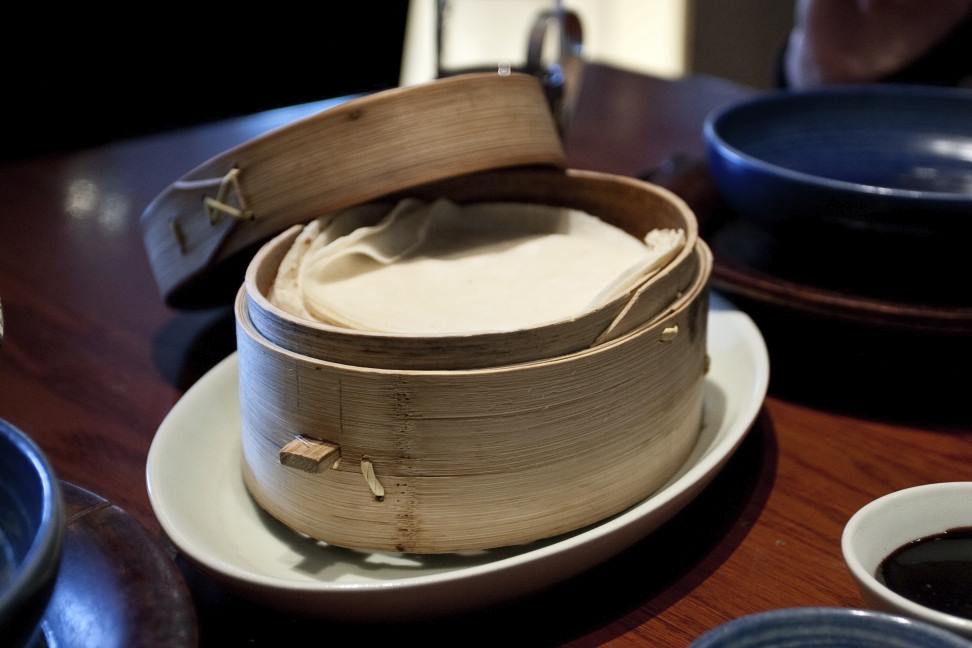 Some pancakes were presented on the side to wrap the other parts of the duck, starting with… 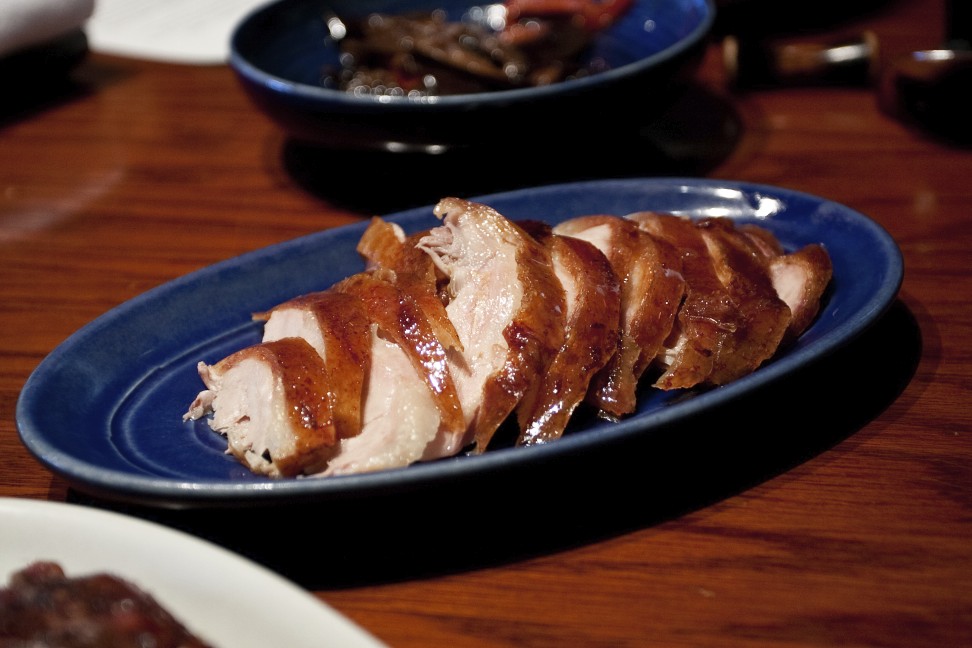 … the leg of the duck with the skin. It was deliciously succulent with a good contrast between the tender meat and the crispy skin. We were again advised to have it with the pancake and the garlic sauce. I preferred this cut far more than the… 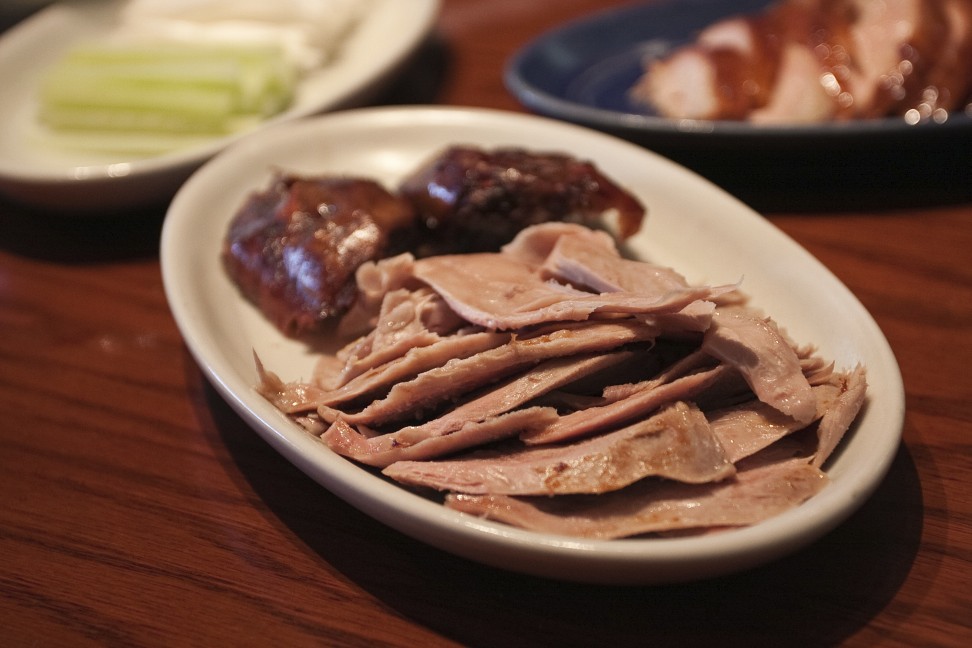 … Breast meat which also was tender and juicy but lacked that dimension of flavour and texture from the crispy skin. 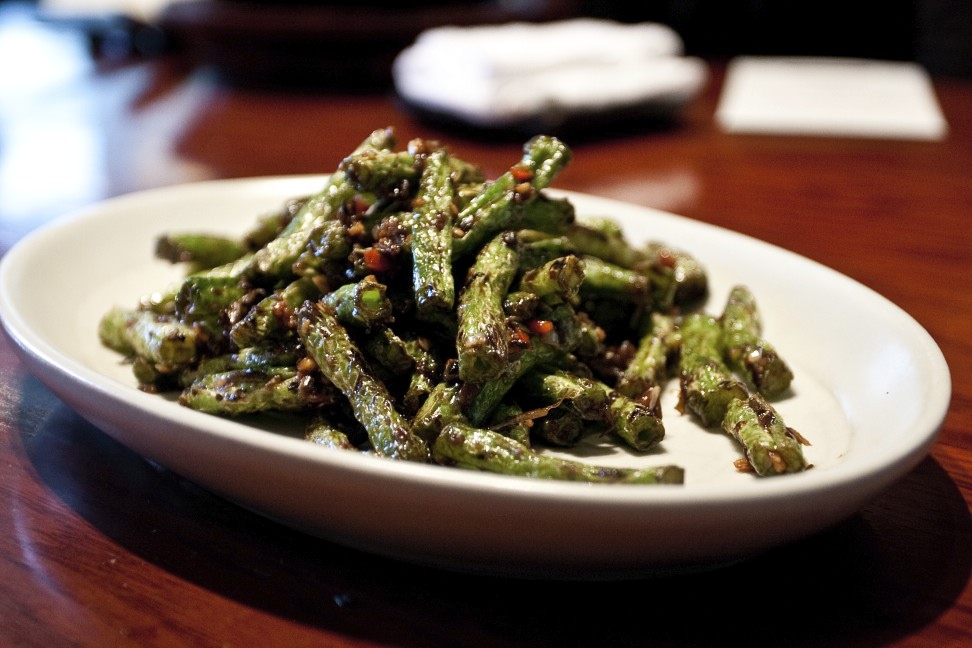 Some extra courses followed starting with Fried dried string beans with minced pork and preserved vegetables. I absolutely love fried Chinese vegetables and this was no exception. Great crunch, good level of heat and a generous amount of garlic. Divine. 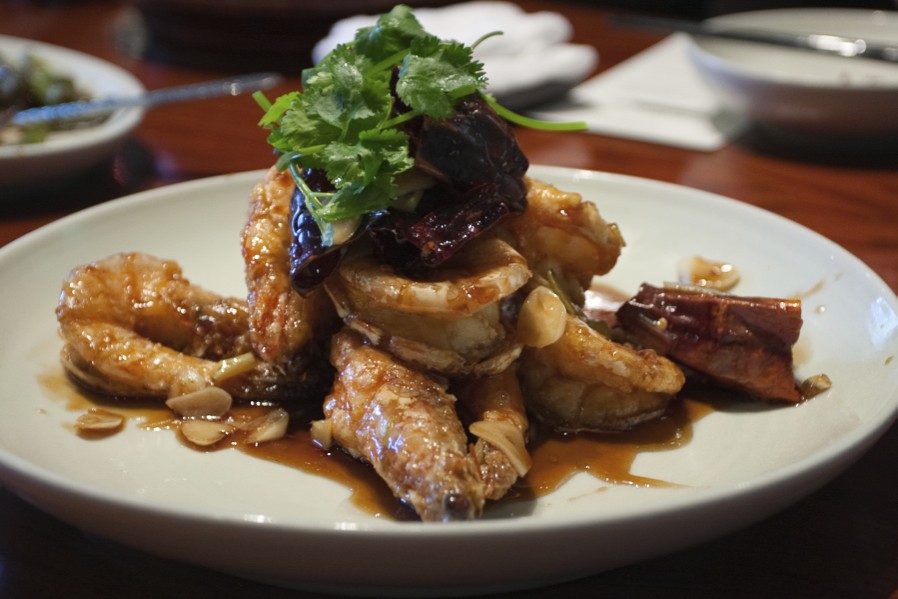 The Honey glazed king prawns with dried chilli, ginger and sliced garlic was a pleasant surprise. The crispy prawn had been deep-fried enough to allow us to eat the skin as well. I couldn’t remember the last time seeing such gigantic prawns! 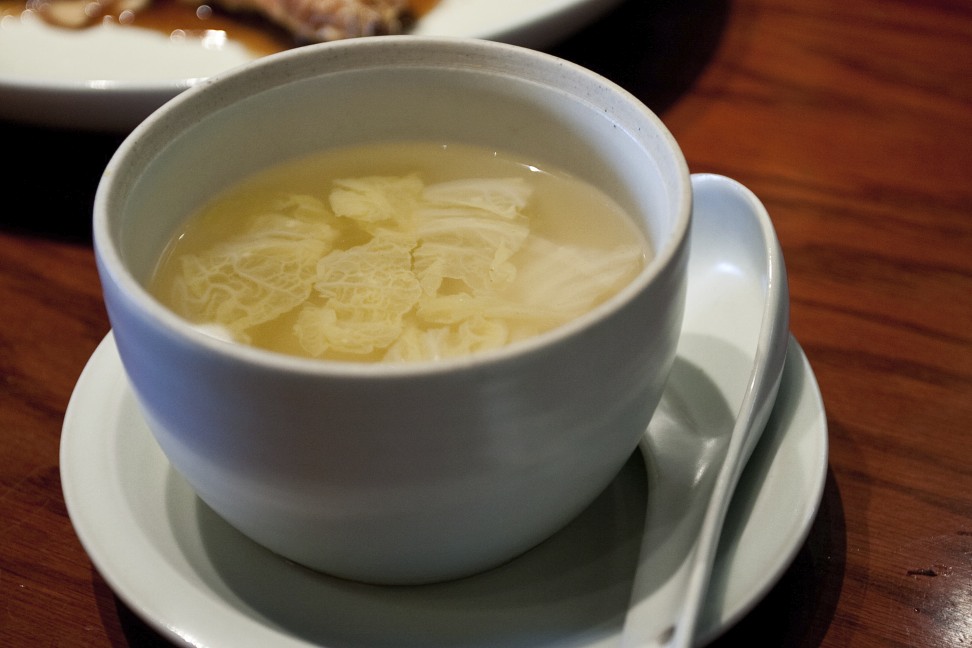 A bowl of Duck soup made from the bone which was completely absent of flavour. Perhaps it was served at the wrong time as the preceding fried courses had a lingering flavour dominating my palate. 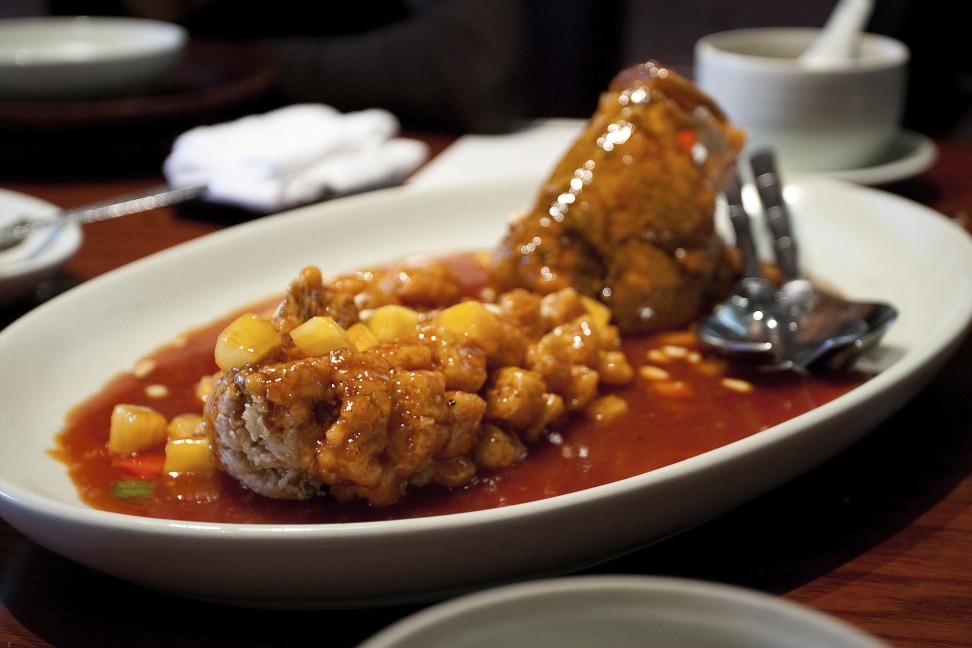 A favourite dish from Hangzhou, the Crispy Mandarin fish with sweet and sour sauce, served without bones. I’m not very keen on sweet and sour dishes primarily due to the fact that I always found an imbalance between the two elements. On this occasion, the balance of sweet and sour was spot on and consequently delicious. 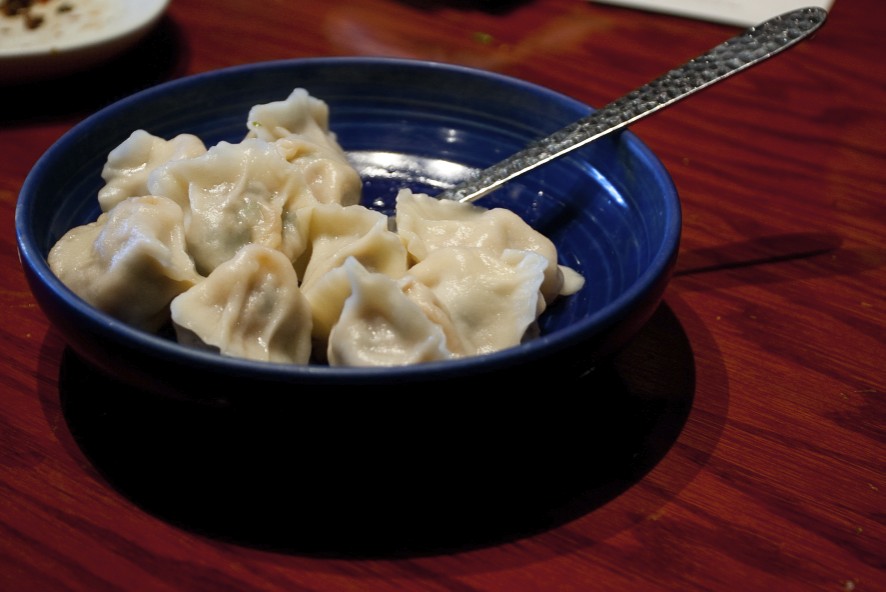 Rather than going for the conventional options of white rice as a side dish, we had some Boiled dumplings filled with mince pork Beijing Cabbage and yellow chives to go with food instead. It wasn’t bad but was no contender to the phenomenal ranges fo dumplings we had in Shanghai the subsequent week. 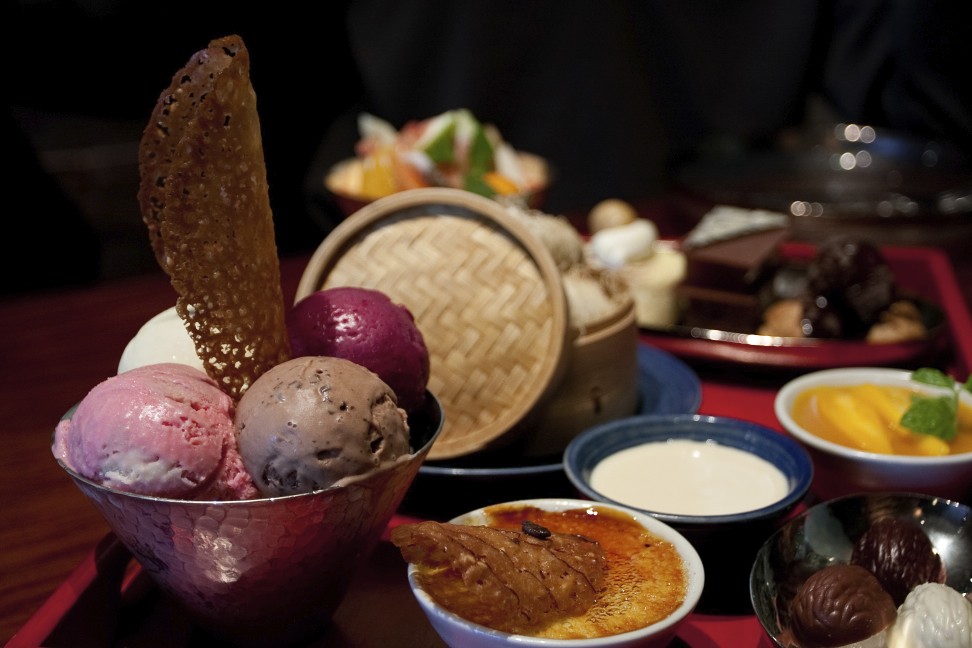 Dessert took us all by surprise. We had an assortment of desserts from the banana chocolate spring roll, cheesecake with apricot compote, a decadently rich chocolate mousse with brownie, profiteroles, ice cream with rose, lychee, vanilla and chocolate flavours with a brandy basket, chocolate with five grain liquor (wuliangye), lavendar creme brulee which was slightly lumpy and uneven in texture, mango pudding and some fresh fruits. We were absolutely stuffed! 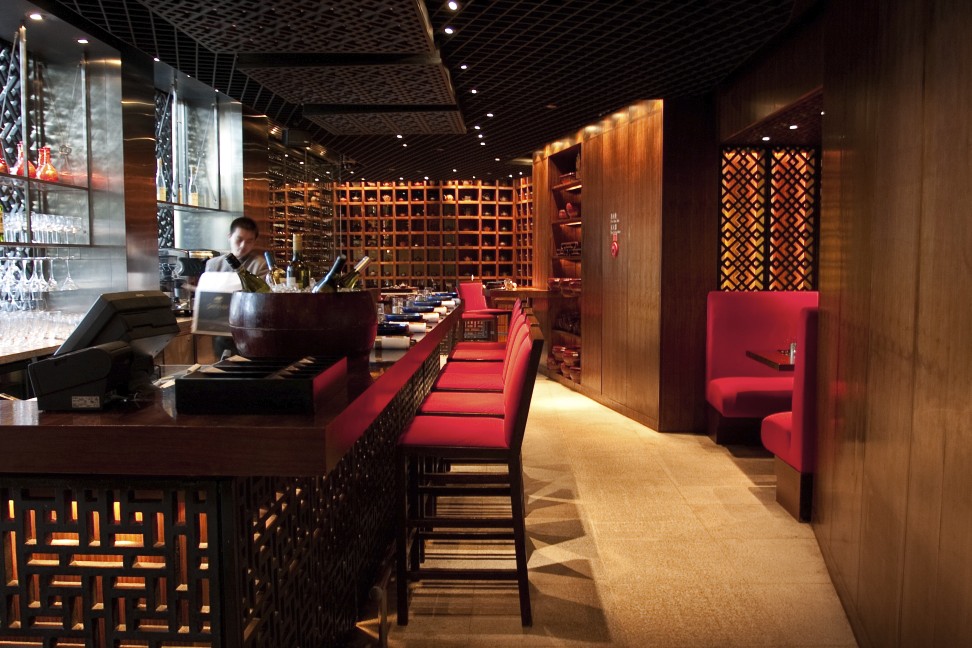 The Peking Duck in Made in China was by far the best one we had during our stay in Beijing. The bonus of course were the additional courses we had little to no expectations from, yet delivered on a high note. However, top end restaurants in China still have a long way to go when it comes to the business of service. Made in China was no exception with the brusque service and lack of interaction with the front of house. But given the modest price tag and delicious food on offer, it would not deter me in the slightest from coming back over and over again. Just remember to reserve your mallard in advance.