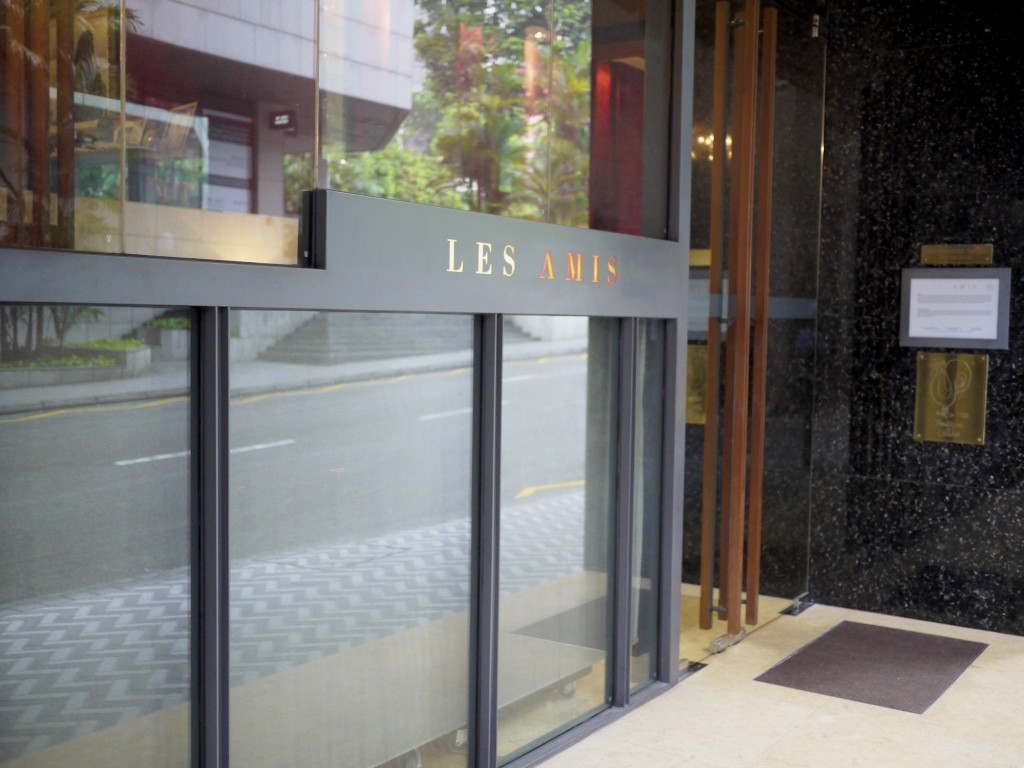 The fine dining scene in Asia has been witnessing some exciting transformation over the past decade and Singapore has been no exception. With the increasing presence of big foreign names like Guy Savoy and Tetsuya Wakuda joining the playing field, it is evident that demand for cuisine at the highest culinary level in Singapore is steadily growing. Furthermore, what I personally have found exciting has been the growing pool of home grown talent who have been pivotal in putting Singapore on the culinary map. One restaurant that has stood at the forefront of this movement over the past decade, producing some of the country’s pedigree chefs is Les Amis. 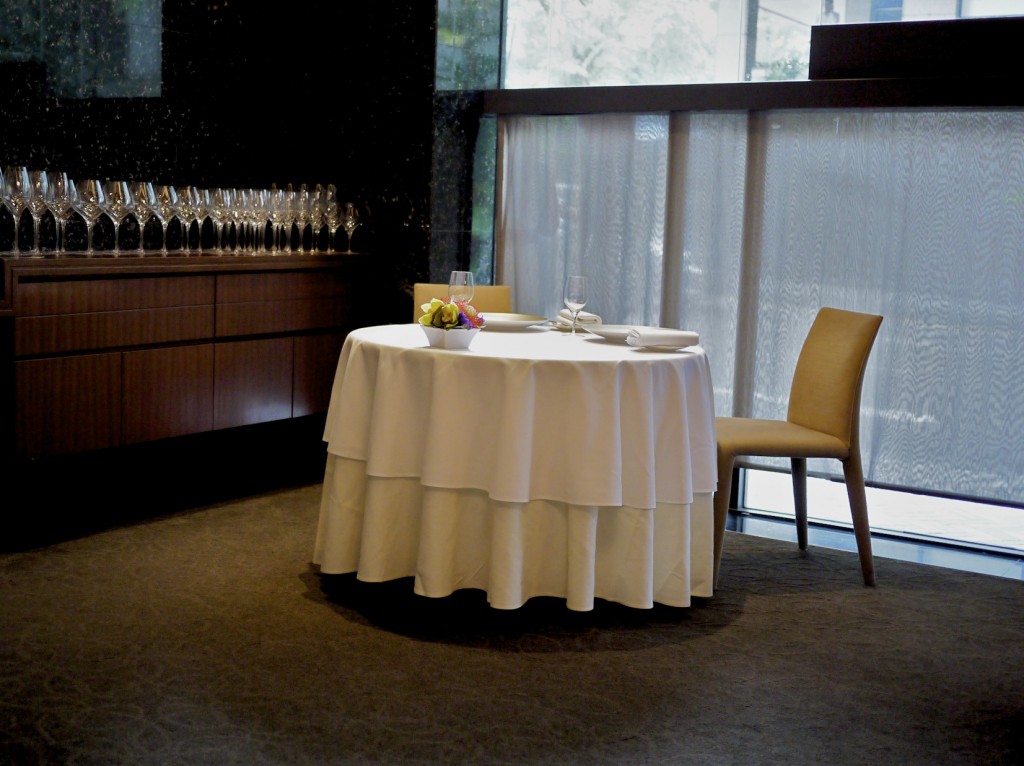 Unlike majority of the fine dining establishments that currently dominate the culinary scene in Singapore, Les Amis continues to do what they have always been good at and that is serving classic French cuisine using high quality ingredients. Add to that the best wine cellar in the city (and arguably the region) to complement the simple yet perfectly executed and delicious dishes that comes out from the kitchen. Could things get better? I was excited to be back in this restaurant after a 12 years hiatus. Although I had great memories of the restaurant during my younger years, I was far too inexperienced then to appreciate the skills and attention that went into each dish. What’s more, my palate was certainly nowhere near developed as today. 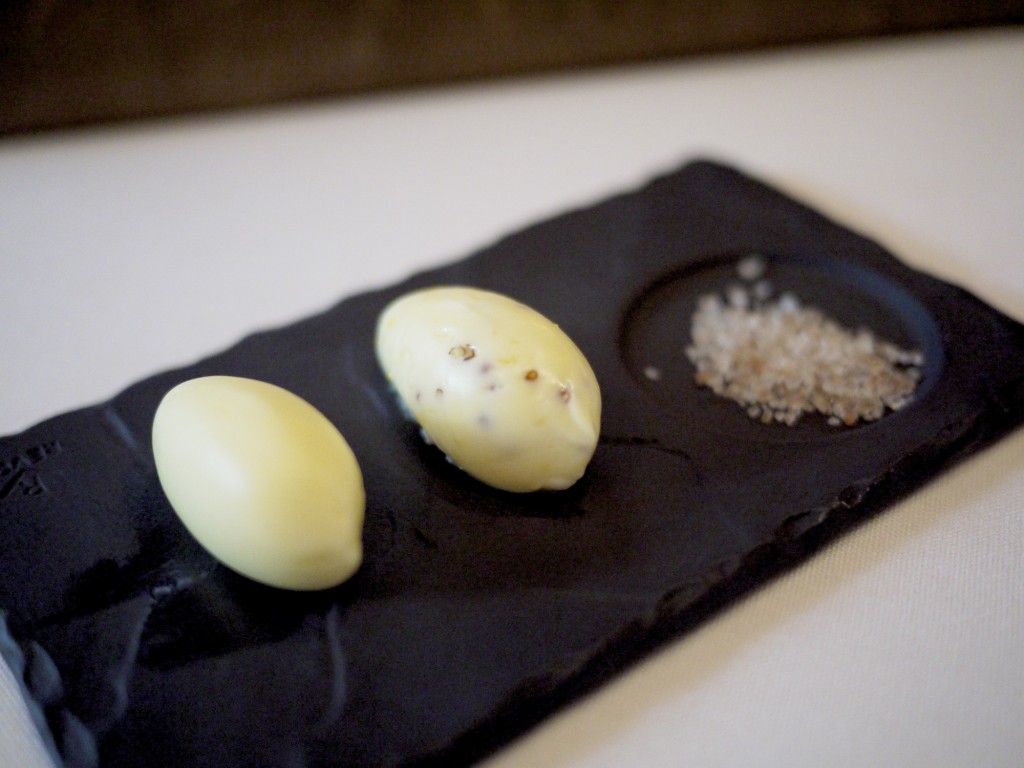 As Singapore’s best classic French restaurant, I expected nothing less than top quality bread and butter. After all, excellence in bread making has always been an essential component to a successful French restaurant. On that front, I was first presented with a couple of choices of butter, plain and pommery mustard, with a pinch of Australian rock salt on the side. It came with… 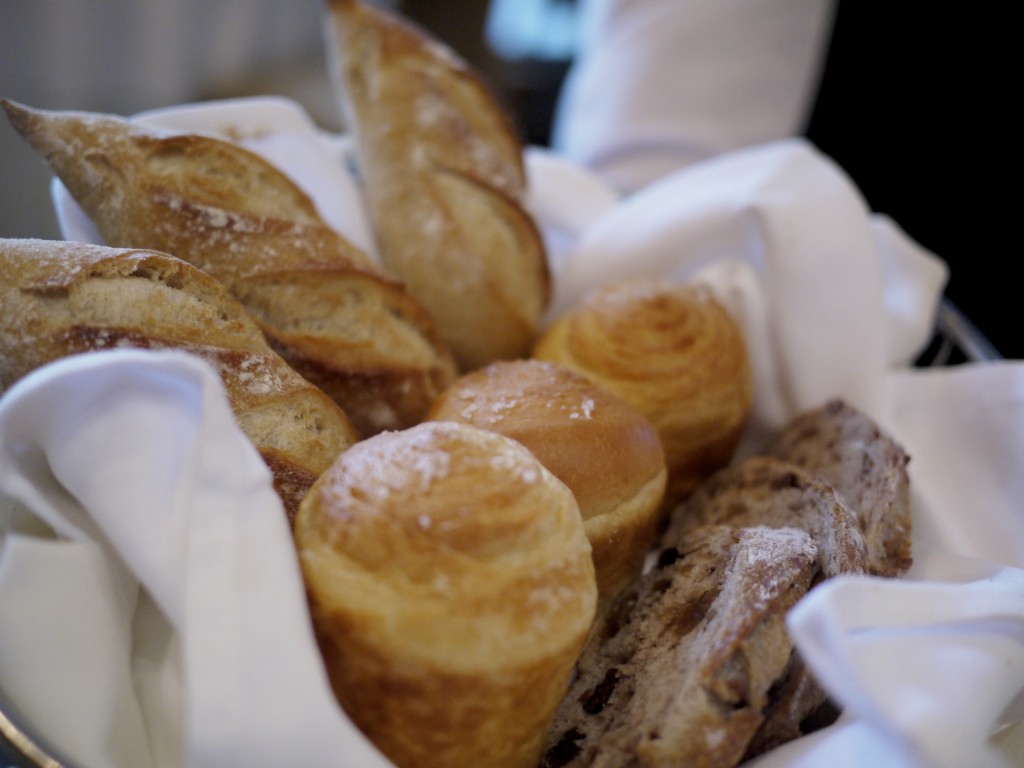 … a selection of bread including a mini baguette, walnut bread and sea salt brioche. I opted for the latter as I do love a good buttery bread. The freshly made brioche served warm had the perfect balance of crispness and butteriness. I knew it was wrong to smudge more butter on it but I just had to try the pommery mustard. It was decadent yet delicious. Hopefully my sacrilegious action went unnoticed. This was definitely the best I’ve had in Singapore and set the bar high for the meal to come. 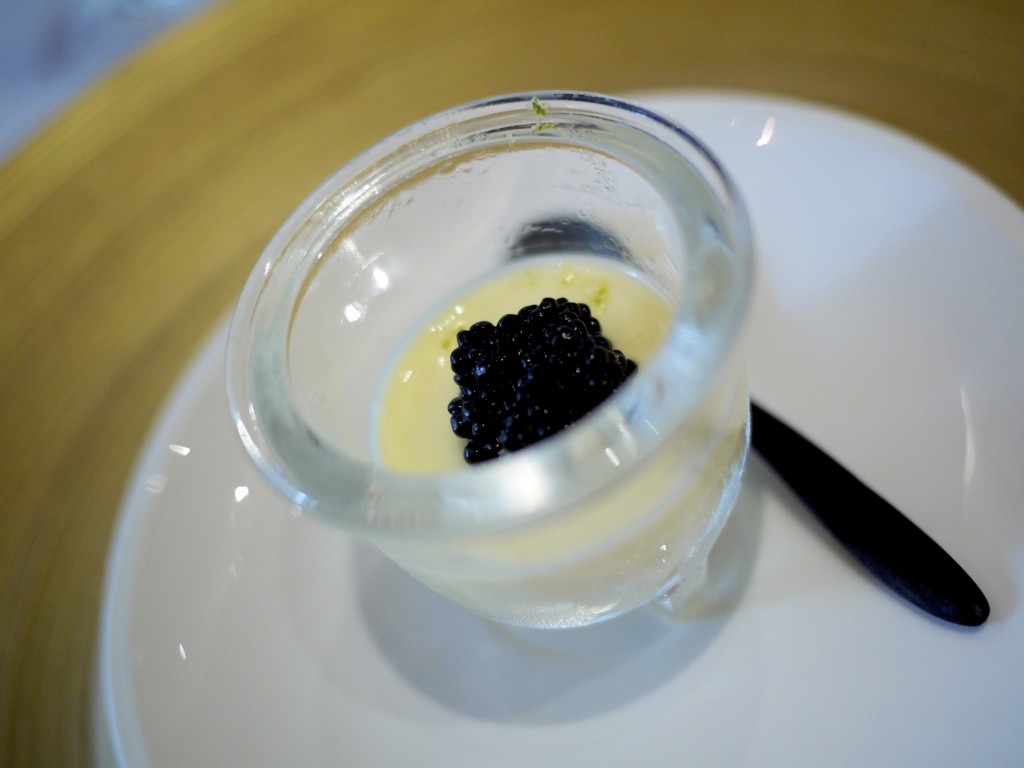 Classic French cuisine tends to be quite rich and for this reason I’ve always preferred to opt for the à la carte menu as opposed to the normally preferred multi-course tasting menu. My meal here was no exception. With the orders taken we were finally under way to start this highly anticipated meal kicking off with an amuse bouche of Bonito flan with avruga caviar. The natural saltiness from the caviar complemented the flavour of the bonito stock, but what I particularly liked was the balance between the acidity from the yuzu shaving and the oiliness of the caviar. A very solid start. 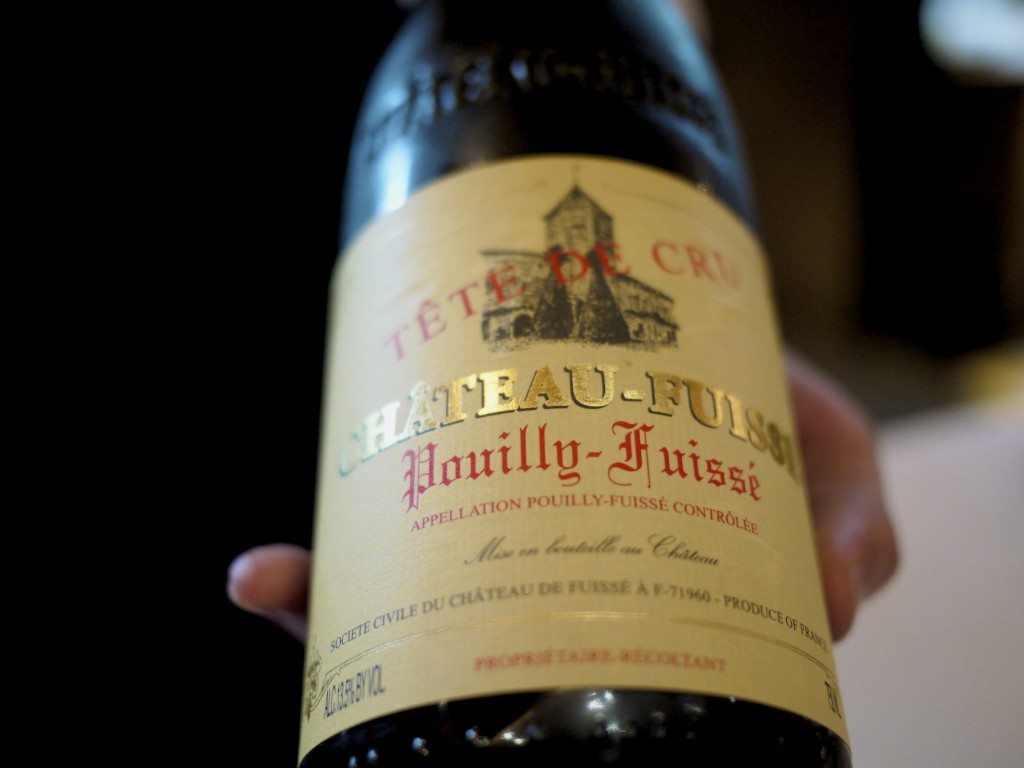 I could see why many wine aficionados also came here. Unlike many of the upmarket restaurants offering only the popular and eye wateringly priced Chateau Lafite and Mouton Rothschild, Les Amis offered a very extensive and interesting collection of wine not often seen in Asia. Given their expertise in wine, I decided to leave the matter in the safe hands of the manager who recommended a bottle of Chateau Fuisse, Pouilly Fuissé Tête de Cru 2010 to go with my meal. It had a fresh intense citrus flavour with a complex finish. 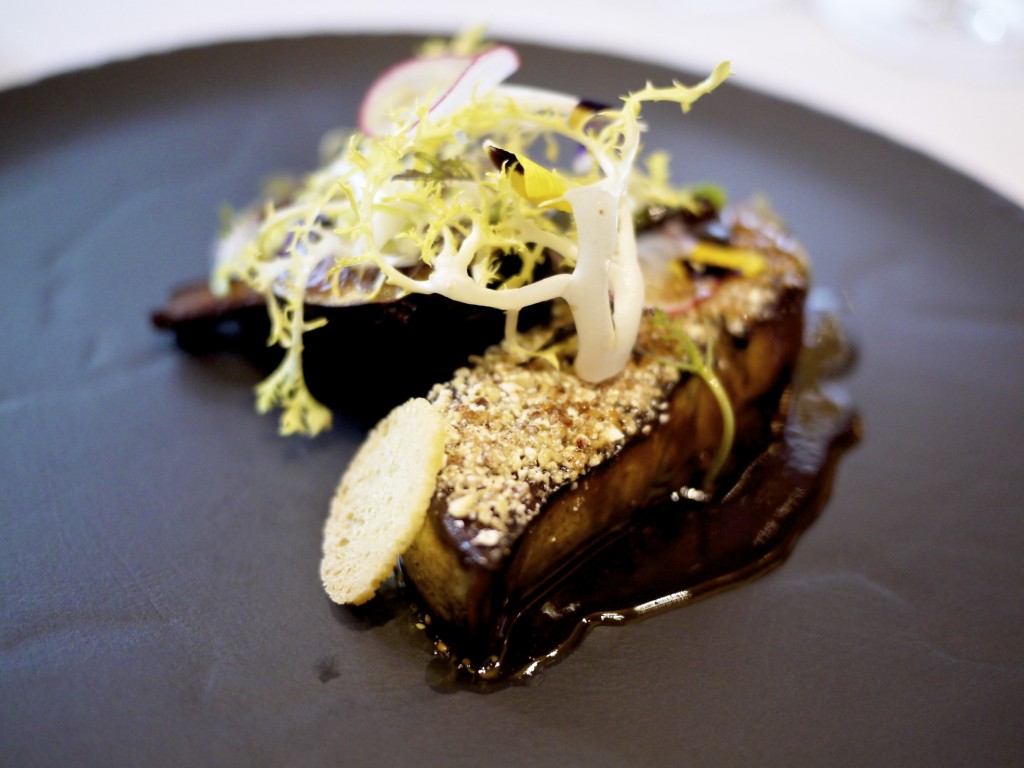 The first course of the Sautéed Foie gras, smoked eel, figs, almond dragee looked deceptively simple yet made clever use of textures from the meaty fig and crunchy almonds to contrast against the delicately soft foie gras. Despite my initial reservation, the smoked eel added a beautiful and delicate flavour, adding an extra dimension to the dish. The wine was the perfect accompaniment as the citrus notes cut through the rich foie gras. 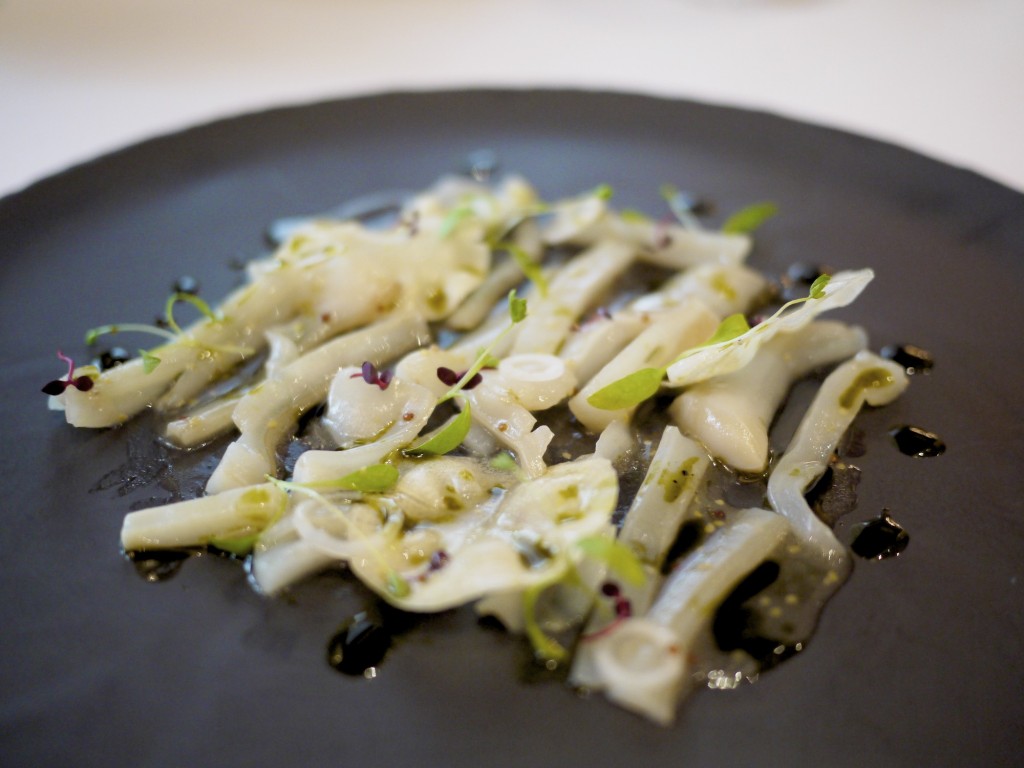 My companion on the other hand had the Chilled razor clam with parsnip, honey-mustard and seaweed oil. Naturally, I couldn’t turn down the offer of a spoonful. The dish could not have been more different to mine with the refreshingly chilled razor clams and its light yet lasting aftertaste. The Asian twist of the yuzu dressing added an interesting complexity to complement the clam and in my opinion was a better choice over the tried and tested lemon. 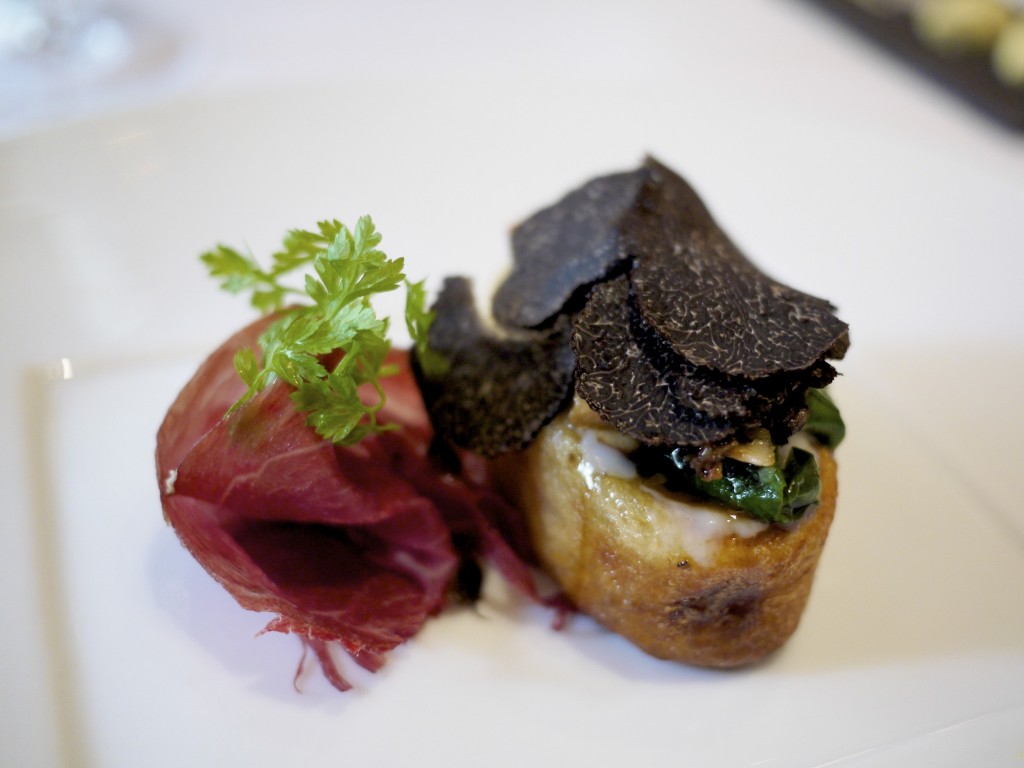 I deliberated over the next course of the Free range Japanese hen egg confit, woodland mushroom, summer truffle, Iberian ham, agria potato fried in duck fat. I was curious to see how the culmination of these ingredients would taste but I had my eye on another dish. They sold me the dish when I enquired about the origin of the truffle; they were Western Australian Manjimup truffles from the same specie as Périgord truffle, otherwise known as tuber melanosporum. The warm egg yolk confit hiding under the generous shavings of truffle added a creamy canvass to magnify its earthiness. The Iberian ham had a good balance of fat and provided the perfect seasoning. The soft potato crown that had soaked up the duck fat completed the trifecta with its texture. A delicate and elegant dish which was simple yet clever. 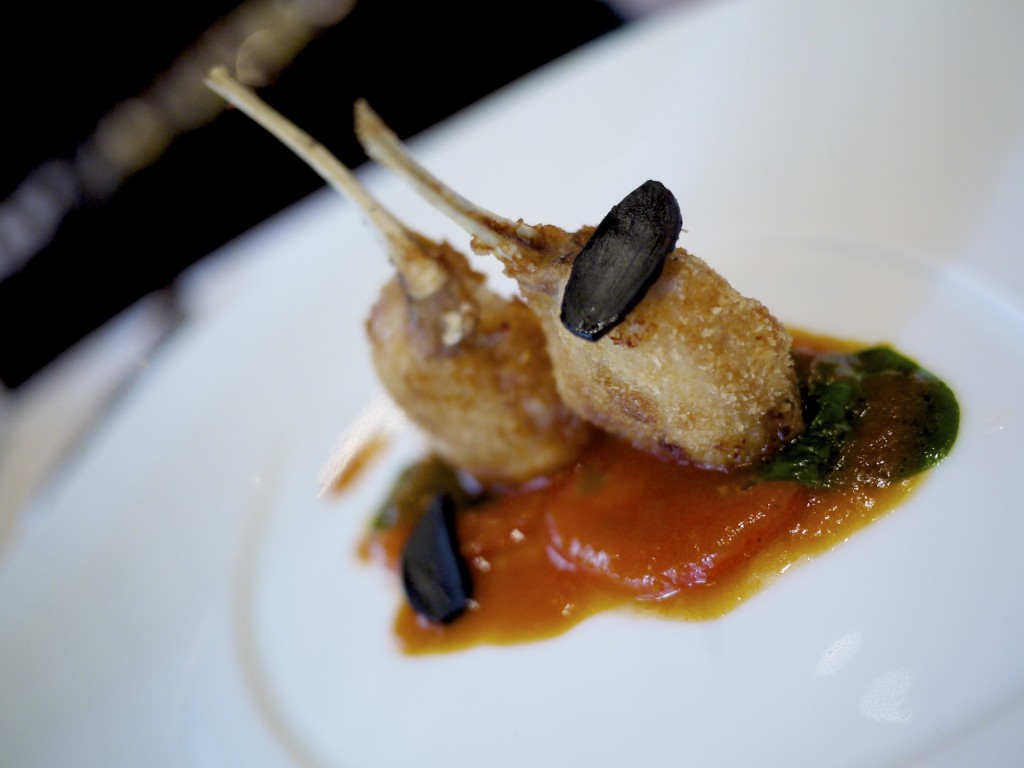 The other dish which I deliberated over was the Sautéed frog leg, momotaro tomato and age black garlic. I initially thought it was a fairly courageous move serving frog legs but immediately remembered that they were not foreign to Chinese cuisine. The momotaro tomato sauce had a naturally intricate flavour and harmonious balance between sweet and tangy. No wonder they’re so popular in Japan! Unlike the techniques used at the Relais de Bernard Louiseau in Saulieu, here they used an aged fermented garlic to mellow out the pungency and replace it with sweetness. I was very impressed to see this calibre of cooking. 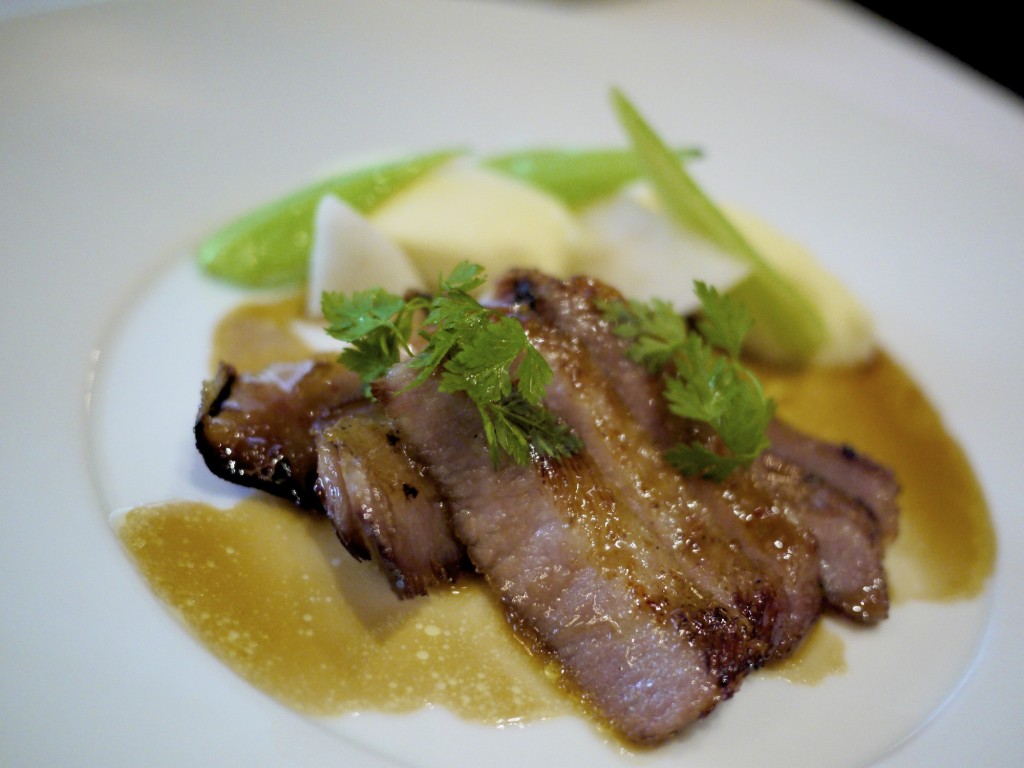 As the next dish for my companion arrived I was kicking myself that I had not ordered the Char-grilled Iberian Iberico pork, cabbage rib and crunchy pear. Fortunately they were generous enough to share. From my latest travels in Asia I’ve noticed that Iberian pork has become a popular choice at fine dining restaurants. Unfortunately, I’ve found many of these establishments unable to draw out the rich flavours and delicate texture of the meat. Chef Lim however treated this supreme cut of meat with the respect it deserved. The fat content was neither too high, avoiding that offensive jelly texture, nor too low, which often results in a dried tough piece of pork. The tender and juicy meat had a lovely coat of smokiness and the crunchy pear provided that contrasting texture and refreshing yet subtly sweet note. 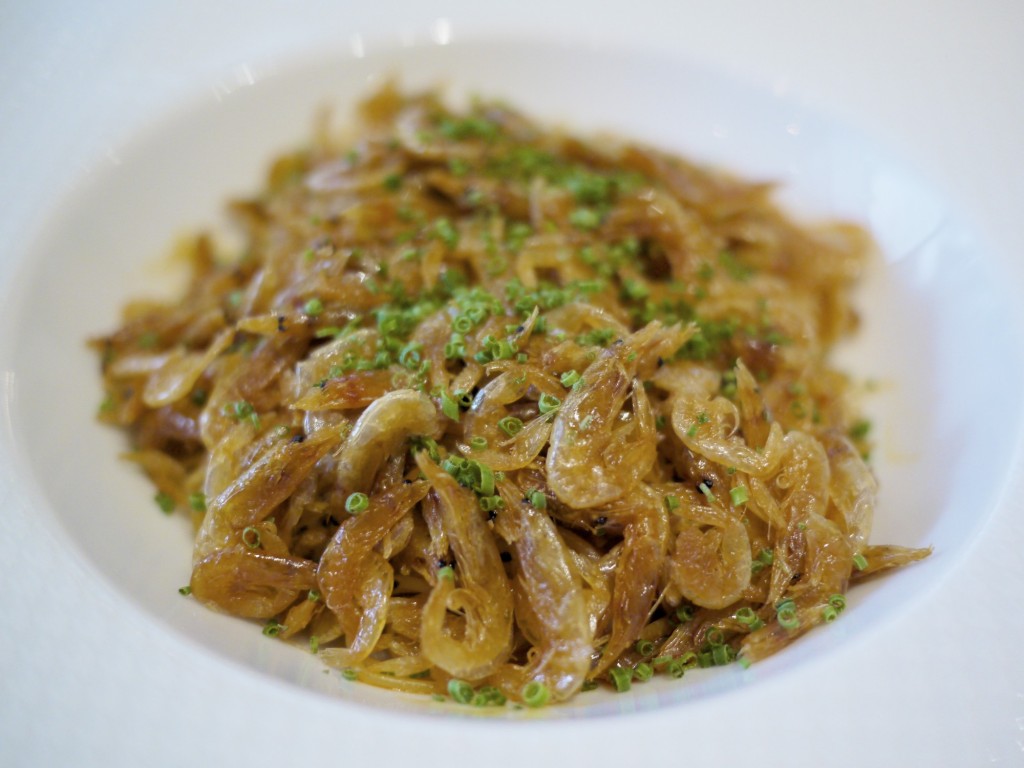 I was quite annoyed with myself for not having ordered the pork dish but that was only until my course of the Angel hair pasta with chilli Nduja and crispy shrimp arrived. This dish which has appeared on the menu since 1998 epitomises the restaurant’s open-mindedness and creativity that has allowed it to successfully remain as one the country’s leading restaurant. For a start, it’s quite a statement to have an Italian dish as your signature course in a French restaurant. However, this dish had transformed throughout the last 15 years under the tenure of the each head chef, allowing the personality of each one to shine. In my case, Chef Lim had incorporated a generous portion of the crispy in-season Sakura ebi (shrimp) from Suruga Bay of Shizuoka prefecture in Japan. Each bite of the crustaceans released a flood of flavour followed by a warm and comforting sensation from the carefully balanced chilli. An Asian touch to a classic Italian dish. Certainly could see why they kept this dish! 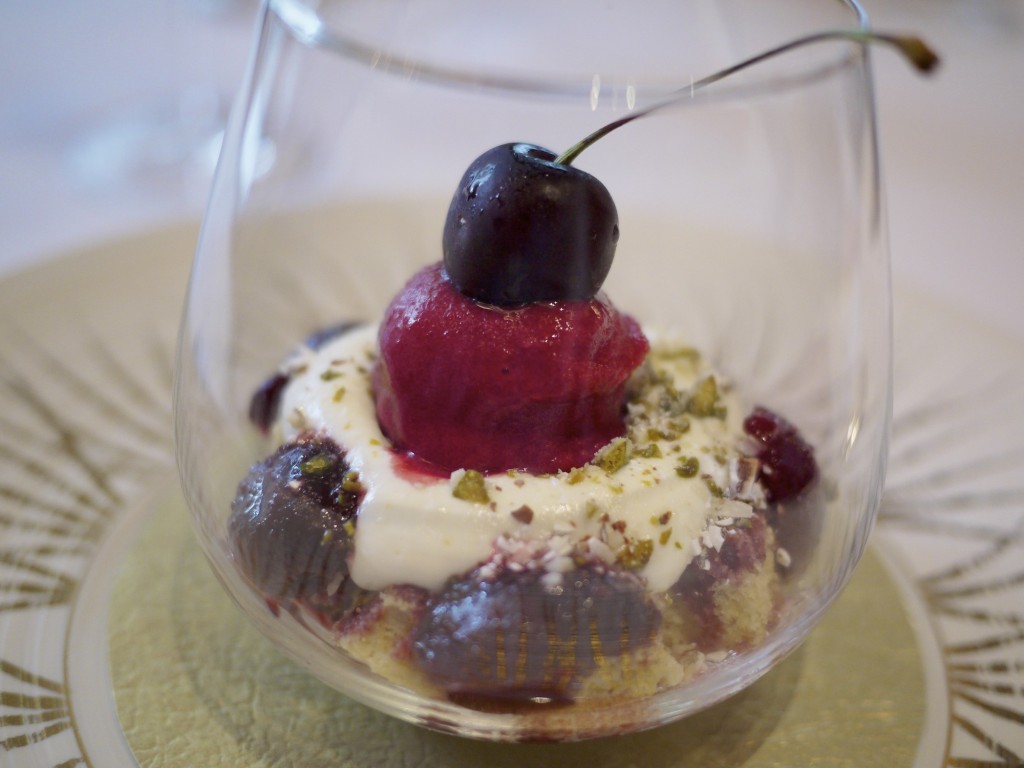 Having had three courses (and a few generous mouthfuls of my companions dishes), I opted for a lighter dessert with the Poached cherries with layers of yoghurt and pistachio biscuit, sour cherry sorbet. The best part about this dish was the quality of the French Burlat cherries, most likely sourced from Vaucluse which supplies over a quarter of its production in France. The sweet dark cherries had been poached in its own juice and married well with the refreshingly sour sorbet. 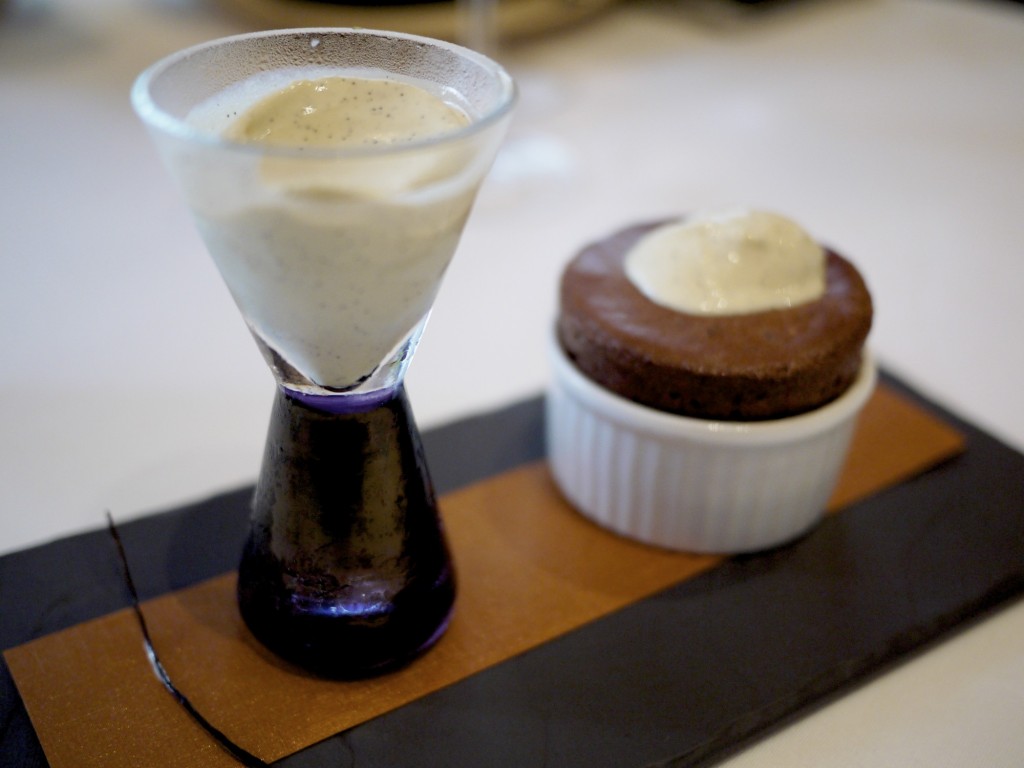 The alternative option was a Dark chocolate “P125” Soufflé with Tahiti vanilla ice cream. It was a decent soufflé but admittedly I was quite full and not in the mood for one. I personally find soufflés too rich most times and not ideal in hot climates. Whilst I could appreciate the skill that went into this one, I felt that it was a bit too much considering what I had eaten already. Mind you, I didn’t turn down the opportunity of getting a spoonful though! 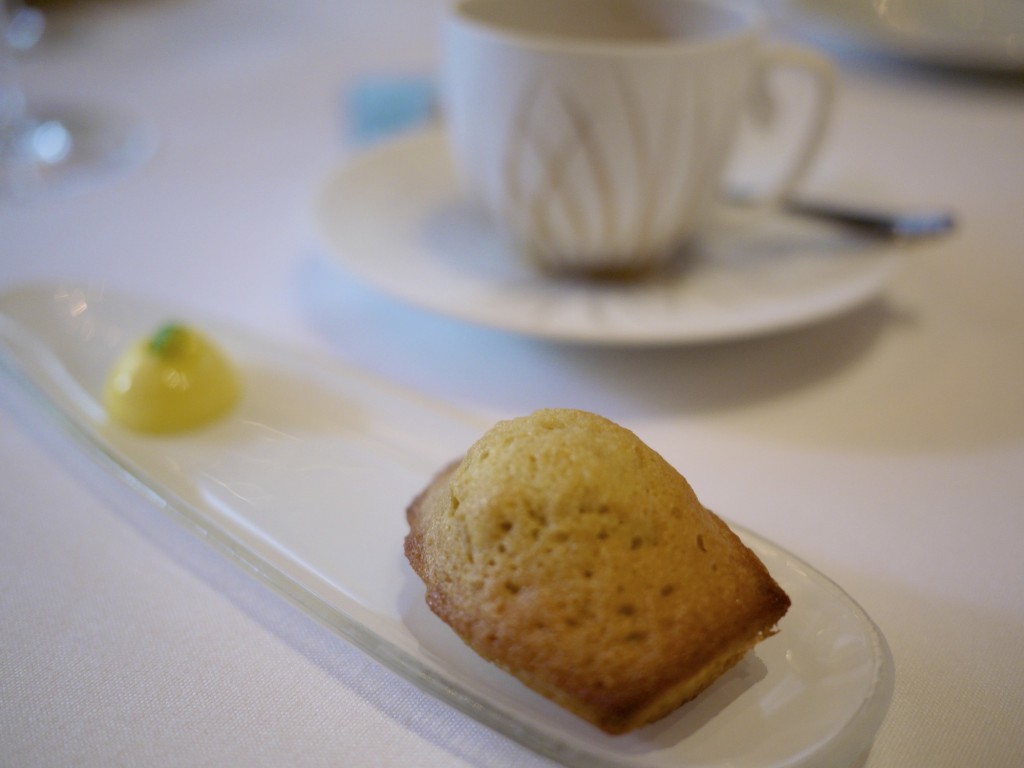 I did managed to make some room for the petit fours of a lemon madelaine and lemon cream to finish the meal with my espresso. 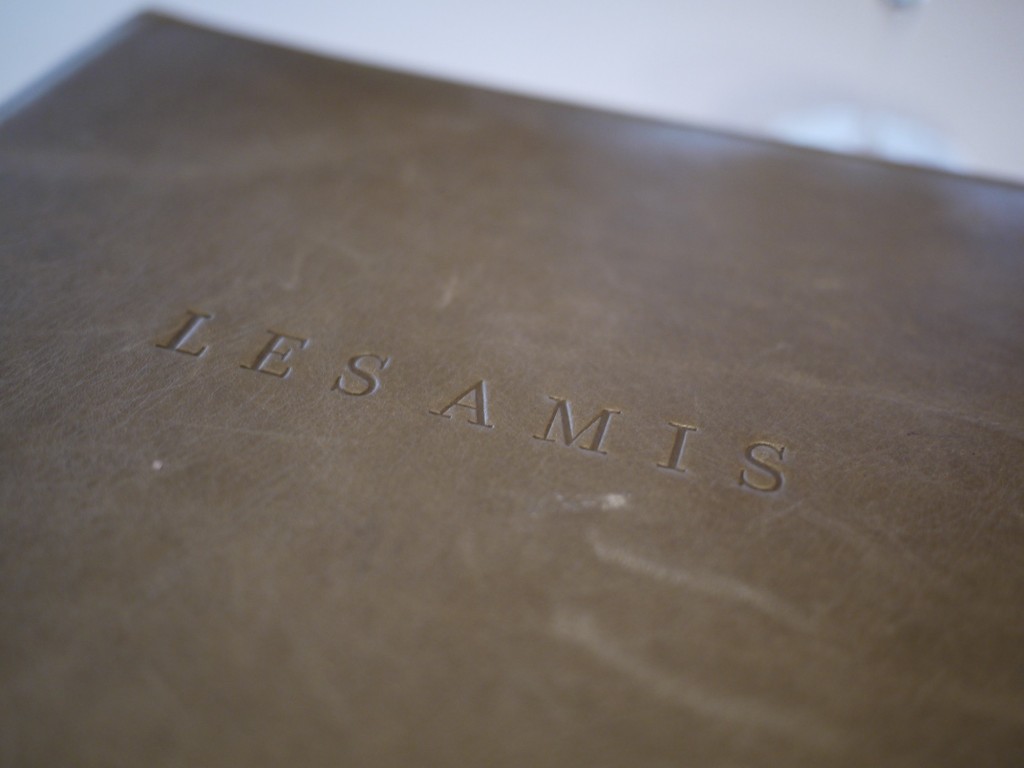 If it wasn’t clear from my comments above, the meal here was very solid. The level of cooking from the starter to the dessert were consistently delivered to a high standard, offering punchy bold flavours using high quality produce and ingredients. Furthermore, as the menu here was dependent on the seasonality of the produce around the world, the menu evolved constantly allowing regular diners to sample new dishes on each return. One of the joys of Les Amis is its wine. Dining here without wine, for me, would be missing the point when you have such an eclectic choice that caters for both end of the budget spectrum. Armed with a solid front of house team that offers a friendly smile and a professional service, it’s not difficult to see why Les Amis has become the benchmark for fine dining in Singapore.